People are now so reliant on their smartphones, the devices are ‘becoming our homes’, experts warn

Humans have become so dependent on smartphones in our every day lives that they are ‘becoming our homes,’ according to a new study into their use and impact.

Anthropologists from UCL documented smartphone use in older adults around the world, from Ireland to Italy, over the course of a year.

The landmark study found that rather than being something to play with to pass the time, people treat their smartphones like their home, a place where they live.

Professor Daniel Miller, study lead author, said smartphone use was leading to the ‘death of proximity’ and an end to face-to-face interaction among all age groups.

This is because people ‘go home’ into a device, whether it be over a meal, meeting or other shared activity, adding the person can ‘just disappear’ into their smartphone.

The team say there is no specific cause, but suspect it is due to messaging apps such as WhatsApp allowing families and friends to stay in touch from a distance.

Humans have become so dependant on smartphones in our every day lives that they are ‘becoming our homes,’ according to a new study into their use and impact. Stock image

WHAT IS SMARTPHONE ADDICTION?

The term ‘smartphone addiction’ has often been criticised in the scientific literature.

Some experts argue the lack of severe negative consequences compared to other forms of addiction make the name misleading.

Some say the issue isn’t with the smartphone, but it is merely a medium to access social media and the internet.

Alternative terms such as ‘problematic smartphone use’ and concepts have been proposed instead.

Despite the controversy on the term ‘smartphone addiction’, as described above, it is still the prevailing term in the scientific world.

Additionally, the psychometric instruments used in many studies explicitly refer to the concept of ‘smartphone addiction’.

In the upcoming years, a shift away from the term ‘smartphone addiction’ towards more appropriate terms, as discussed above, might be seen.

Study authors have been exploring the use of smartphones and their impact on interaction in nine countries around the world for this extensive study of humanity.

They say that focusing on older adults (people who describe themselves as neither young nor elderly) removed demographic niche from the equation.

The project involved 11 researchers each spending 16 months studying ageing, smartphone use and the potential of smartphones for health.

‘Users of smartphones are focused upon tasks rather than individual apps,’ explained Miller, adding ‘they simply combine bits of different apps to achieve their goals.’

‘Taking the example of health, we can see that bespoke apps for health are usually less important to users than combining generic apps such as WhatsApp with googling,’ he added in a report called ‘The Global Smartphone’.

Apps such as LINE, WeChat and WhatsApp have become the ‘centre piece’ of most smartphones, the team discovered.

In fact, they believe they ‘may become so dominant that users view smartphones essentially as devices for gaining access to these platforms.’

The team found that these apps are transforming family relationships, helping with the function of community and making sociability more scalable.

‘These apps are the platforms where siblings come together to take care of elderly parents, proud parents send out endless photographs of their babies, and migrants reconnect with families,’ the team explained in their report.

They added that ‘they are the means by which you can still be a grandparent even if living in another country,’ a phenomenon known as care over distance.

However, Miller says these devices have led to us becoming ‘snails carrying our homes in our pockets,’ causing us to ignore family and friends when in person. 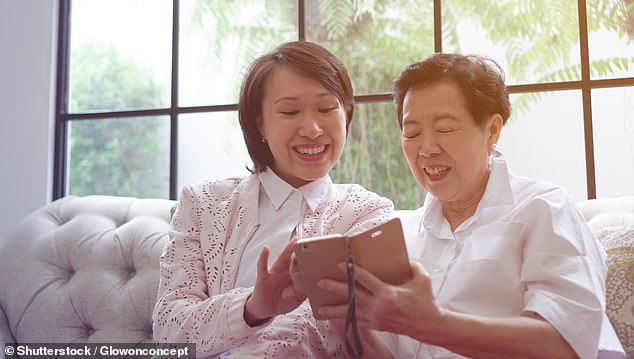 The landmark study found that rather than being something to play with to pass the time, people treat their smartphones like their home, a place where they live. Stock image

Toddlers who spend a lot of time playing with touchscreen devices are more easily distracted, a new study suggests.

Using eye tracking technology, UK experts found infants with high daily touchscreen use were quicker to look at other objects when they appeared within their line of sight on a computer screen.

They were also less able to resist distraction compared to toddlers with no or low touchscreen use, experiments found.

The findings fuel the growing debate around the role of screen time on infant development and increased levels of screen time during the current pandemic.

‘The use of smartphones and tablets by babies and toddlers has accelerated rapidly in recent years,’ said study author Professor Tim Smith from the Centre for Brain and Cognitive Development, Birkbeck, University of London.

‘The first few years of life are critical for children to learn how to control their attention and ignore distraction, early skills that are known to be important for later academic achievement.

‘There has been growing concern that toddler touchscreen use may negatively impact their developing attention but previously there was no empirical evidence to support this.’

‘This behaviour, and the frustration, disappointment or even offence it can cause, is what we’re calling the “death of proximity”,’ he explained.

‘We are learning to live with the jeopardy that even when we are physically together, we can be socially, emotionally or professionally alone.’

Smartphones now feel like an integral part of a person, assuming every unpleasant characteristic of our humanity from bullying to addiction, the team found.

‘The rise of the Covid-19 pandemic clarified a key contradiction,’ said Miller, that  smartphones ‘considerably extend the possibilities of surveillance, but are simultaneously a means for providing care over a distance.

‘The smartphone is perhaps the first object to challenge the house itself in terms of the amount of time we dwell in it while awake,’ the team explained.

‘We have become human snails carrying our home in our pockets.’

They don’t assume that always being ‘home’ is a good thing, particularly when the ‘home’ is with you everywhere, saying that ‘home’ isn’t always a place of refuge.

‘Employees may now be expected to remain in contact with their work, for instance, even after leaving the workplace. A child bullied by other pupils at school now finds little or no respite through coming back to her or his home.’

However, as seen during Covid-19 lockdown, smartphones can keep people in touch over a distance, and help families stay in touch when living far apart.

Miller and colleagues describe our views of the smartphone in our lives as contradictory, with complaints about addiction and intrusion set against the benefits such as long-distance communication and instant access to services.

‘Older people talk incessantly about the harm smartphones cause young people, claiming they are ‘addicted to their screens’; they have become anti-social, disconnected from the real world and superficial as a result,’ they report.

Yet at the same time people wax lyrical about the wonderful things they can do with specific apps within the smartphone, according to the team.

‘Couples no longer shout at each other in the car when the non-driver has lost their place in the street atlas they are holding; now they can swear at their GPS instead.

‘Grandparents feel blessed that the grandchildren in Australia can be their incredibly cute selves on webcam. An older woman with dodgy knees does not have to wait in the rain, since an app tells her when the next bus will arrive. 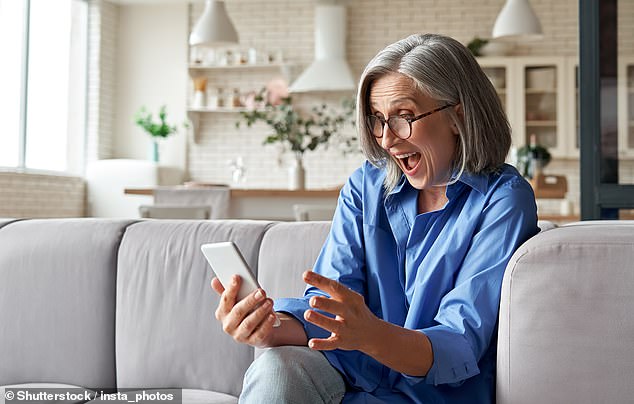 People ‘go home’ into a device, whether it be over a meal, meeting or other shared activity, adding the person can ‘just disappear’ into their smartphone. Stock image

‘Everywhere the smartphone is simultaneously a blessing and a curse,’ said Miller.

‘The smartphone is helping us create and recreate a vast range of helpful behaviours, from re-establishing extended families to creating new spaces for healthcare and political debate,’ Miller said.

‘It is only by looking at the vastly different uses and contexts that we can fully understand the consequences of smartphones for people’s lives around the world.’

The findings have been published in a report by UCL Press.