Several people have been arrested in New York’s Washington Square Park during Pride celebrations in the area.

Twitter users described NYPD officers as having used pepper spray on Pride attendees who were in the Greenwich Village park early on Sunday evening.

Riot police were seen surrounding the park dressed in riot gear including shields and helmets. Some had their batons drawn ready for an encounter.

A chain of officers also filled the perimeter streets on police bikes before scores then flooded the park.

There were at least three confirmed arrests with fears that things might flare up once against, after dark.

At least three people have been arrested in Washington Square Park during Pride celebrations on Sunday afternoon. Police were pictured dressed in riot gear together with helmets, shields and batons drawn 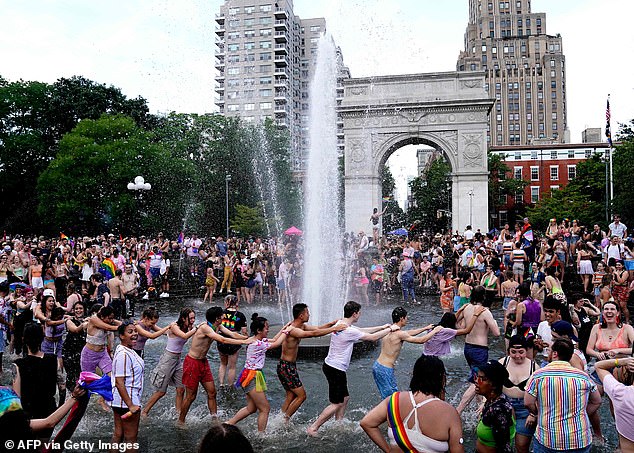 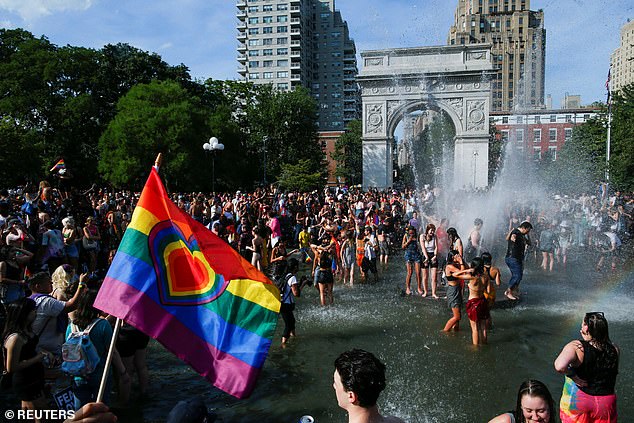 ‘The NYPD has attacked the Queer Liberation March, used pepper spray, and arrested at least one person. Now they’re out in force, and riot gear, threatening more arrests. This is why it’s no cops at Pride.

At least one person could be heard chanting through a megaphone: ‘ The NYPD is not welcome at Pride!’

One Twitter user explained how Pride-goers were congregating close to the iconic arch while a barricade was moved to create more space for those inside the park. 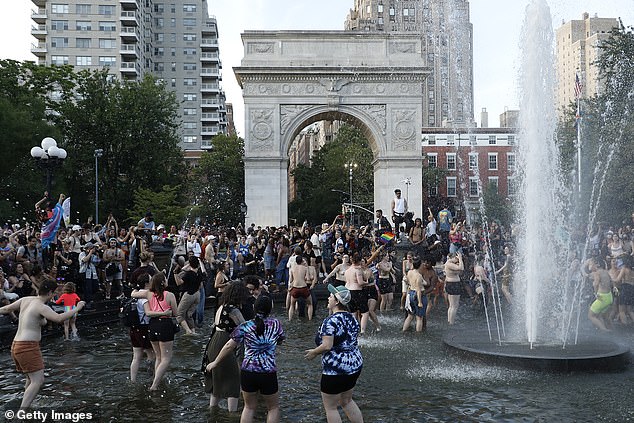 Cops already inside the pen started forcefully shoving it back and a woman became agitated and shoved it back at officers.

Another cop then shoved the metal barricade back hitting a woman.

Parkgoers then went to the barricades to yell at police for not being careful and hurting a woman. It’s at this point NYPD deployed pepper spray.

Over the last month the park has often been the scene of anti-social behavior with everything from illegal boxing matches, to raves and drug taking occurring within the vicinity. 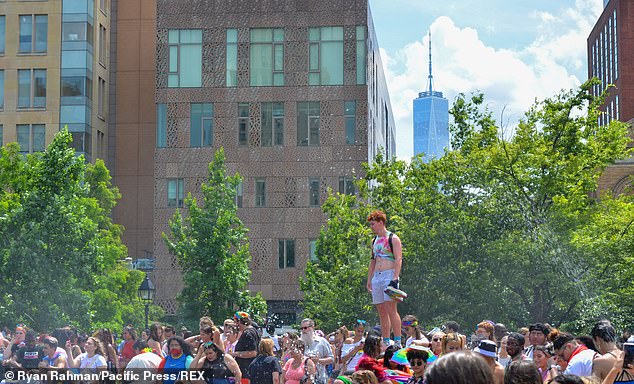 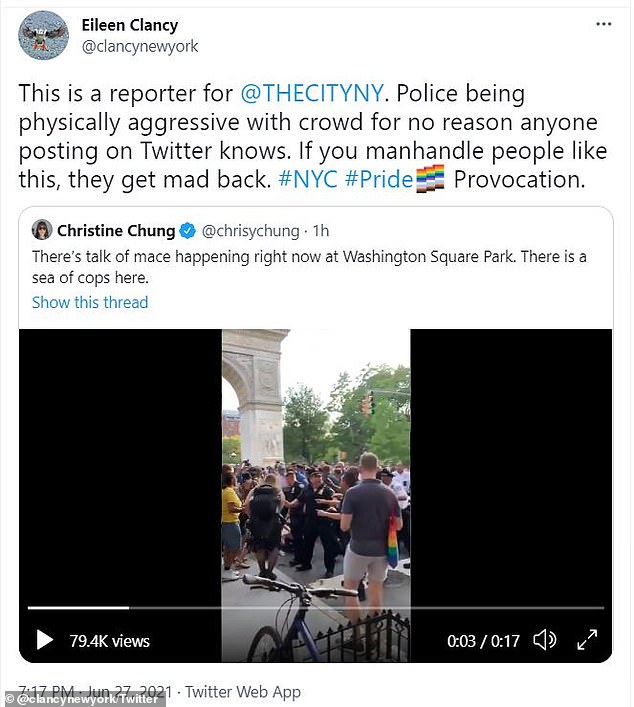 Tensions were already high between the NYPD and those celebrating Pride after organizers of New York City’s event decided to ban LGBTQ police officers from marching in uniform.

For those looking to march for LGBTQ rights, the Reclaim Pride Coalition held its third Queer Liberation March from Bryant Park to Stonewall National Monument and Washington Square Park.

The liberation event does not allow police or corporate participation.

The march commemorates the 1969 Stonewall uprising, sparked by a police raid on a gay bar and tensions between law enforcement and some parts of the LGBTQ community still exist, a half century later. The ban is set to last until at least 2025.

The role police officers should play in the annual parade has been debated for years, but it took on new heat amid a national reckoning around police brutality.

New York City’s streets a year ago were awash in protests over the death of George Floyd and clashes between demonstrators and officers.

‘Folks still have challenging and traumatic and many times horrific relationships with law enforcement,’ said John Blasco, a parade regular. ‘If you’re an officer … of course you should be able to celebrate and express your pride, but you don’t need to do it in a uniform that has perpetuated violence against many of the people who are trying to celebrate their pride that day.’

For others, presence of LGBTQ police marchers is an expression of hard-fought diversity and inclusion that should be celebrated, a hallmark of how integral LGBTQ people are in the fabric of American life.

The ban is not the first for a Pride march; Toronto Pride hasn’t allowed uniformed police since 2017, and Vancouver Pride started limiting their role then as well, while Capital Pride Alliance started doing so in 2018. Denver PrideFest isn’t allowing law enforcement to take part in its virtual event this year, and neither is the Capitol Hill Pride Festival, which takes place in Seattle but is separate from Seattle Pride.

In New York City, an alternative to the Heritage of Pride event called the Queer Liberation March, organized by the Reclaim Pride Coalition as a rebuttal to what they consider a too-corporate, too-comfortable main parade, has never allowed a police presence since its 2019 inception. 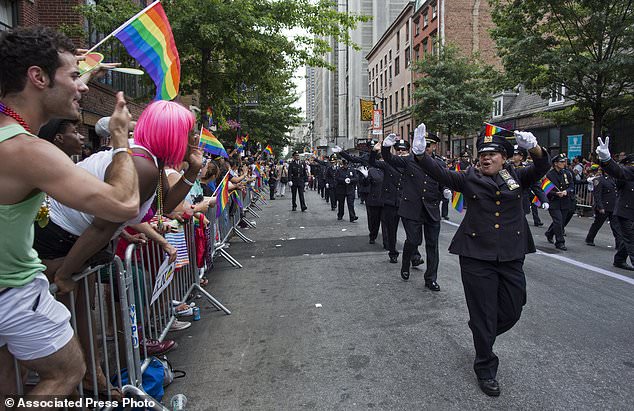 Members of the Gay Officers Action League of the New York police department are cheered during the gay pride march in 2013 in New York. This year, organizers of New York City’s event banned LGBTQ police officers from marching in future parades while wearing their uniforms 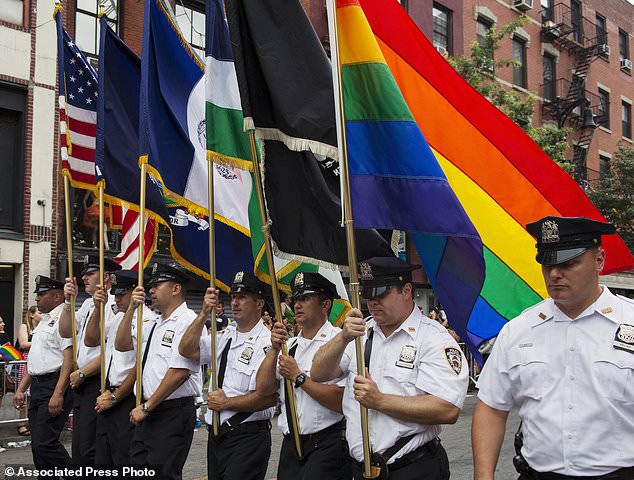 Members of the New York City Police Department carry flags, including one with the rainbow colors, during New York’s Gay Pride Parade, pictured eight years ago in 2013 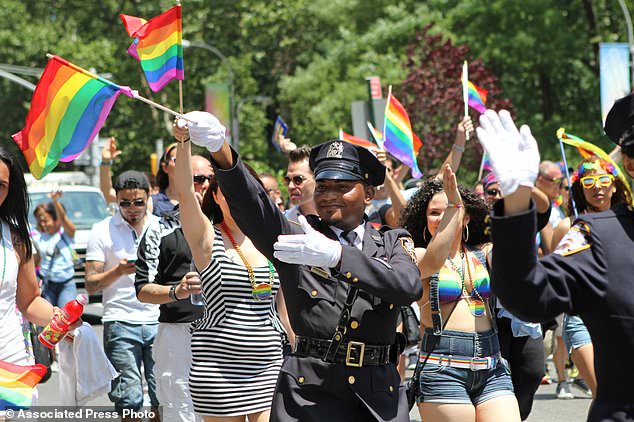 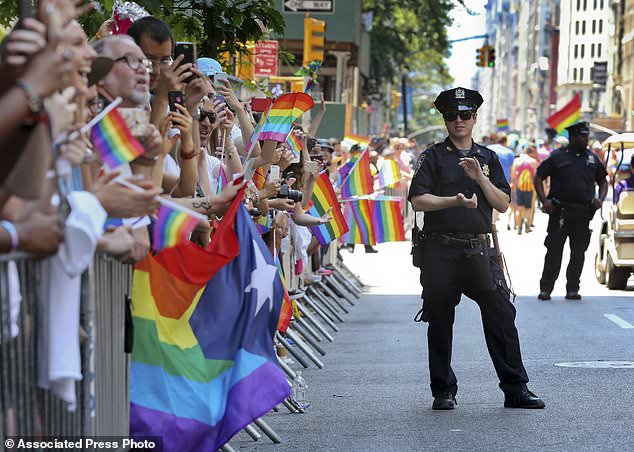 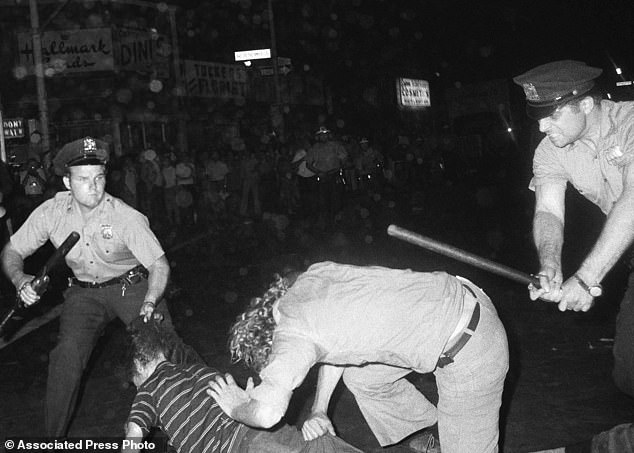