A boyfriend has been accused of hijacking his partner’s big day after he got on one knee during her graduation ceremony,

Edgaras Averbuchas, 27, got onstage and proposed to girlfriend Agne Banuskeviciute in the middle of the event at the University of Essex in Colchester.

People online, and feminists especially were not pleased with the gesture and argued he should have let her ‘have her moment.’

Agne, 25, looked shocked as her childhood sweetheart came up to join her on the stage.

But the young graduate’s emotion turned to joy when her partner, 27, dropped to one knee and popped the question.

However, the moment divided opinion after Edgaras was accused of stealing her thunder.

Overjoyed Agne has hit back at critics and revealed she is over the moon about the very public proposal in front of hundreds of students, lecturers and proud parents.

Aisha Ali-Khan, a core organiser of the Women’s March in London, slammed the video in a blog.

She wrote: ‘Public declarations of love smack of egotism and a need for the party making the fuss to be acknowledged and given a round of applause (exactly what happened here).

‘This does not bode well for the relationship.

‘When someone craves such public attention and adulation all the time, there can only be space for one person and their ego in that relationship,’ she went on. 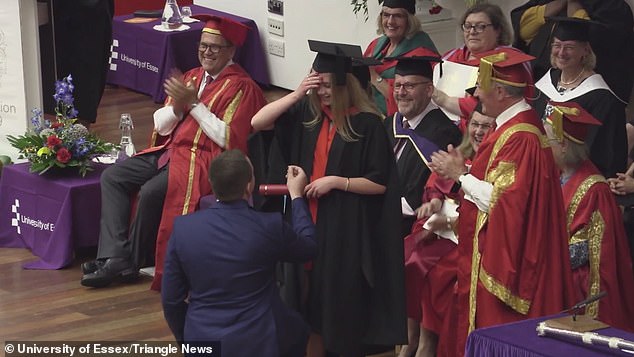 Edgaras Averbuchas, 27, got onstage and proposed to girlfriend Agne Banuskeviciute, 25 in the middle of her graduation ceremony at the University of Essex in Colchester (pictured) 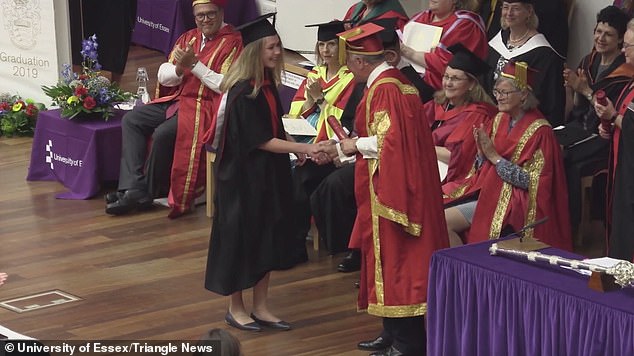 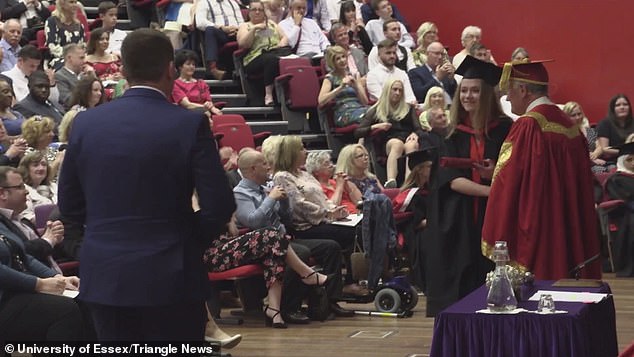 Writer Rebecca Reid criticised the public nature of the proposal in an article for Grazia magazine.

She wrote: ‘The chances are that this couple are very much in love, and that she was delighted with the proposal.

‘But what was she supposed to do if she’d wanted to say no? Break his heart in front of an entire auditorium full of strangers? 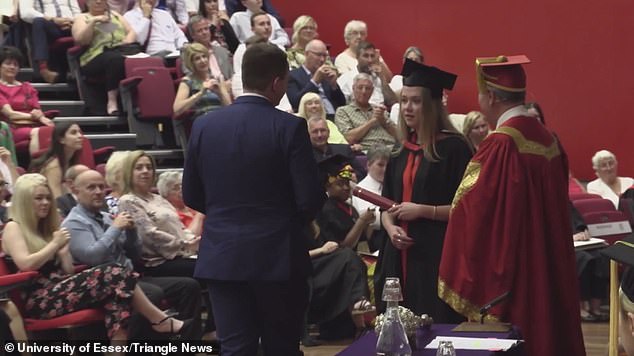 Agne said she had no idea her partner was about to propose, and said she was already feeling a bit nervous and excited during the ceremony 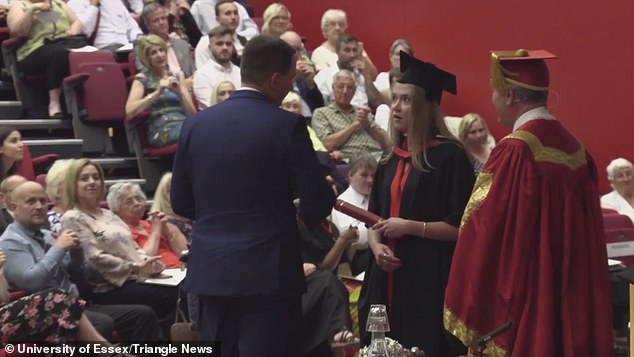 The young woman, diploma in hand, was visibly shocked as her childhood sweetheart started speaking 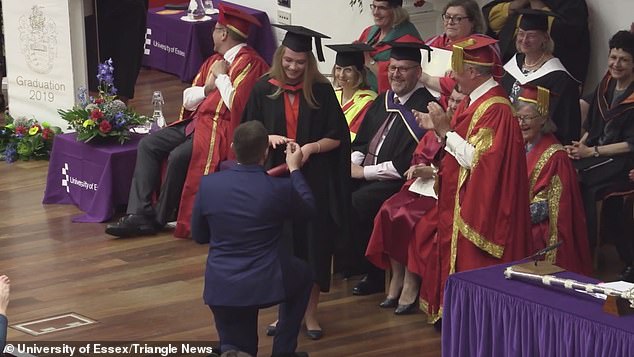 Edgaras then got down on one knee and proposed, and Agne happily accepted to the sound of claps and cheers from members of the university’s faculty

Meanwhile Dr Jana Bacevic, of the University of Cambridge, tweeted: ‘Imagine being a man and feeling so threatened by a woman’s intellectual success that you *have* to force her to frame her identity/agency in relation to *you* on the very day she is being celebrated for her intellect.

Sara Jayne Atkinson fumed: ‘Hijacked her graduation. Years of hard work and now we’re all supposed to be pleased for her. 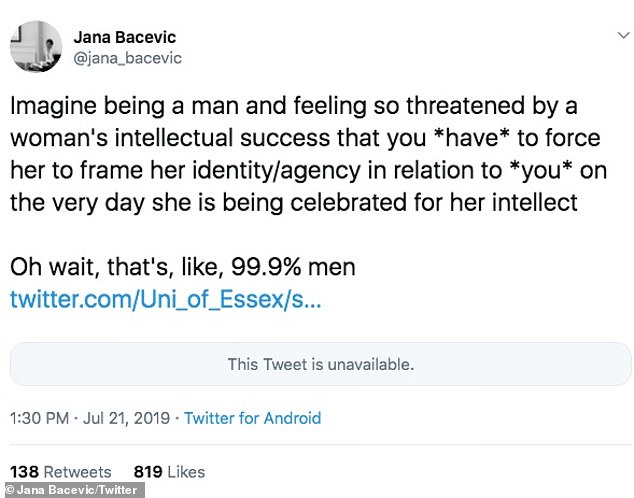 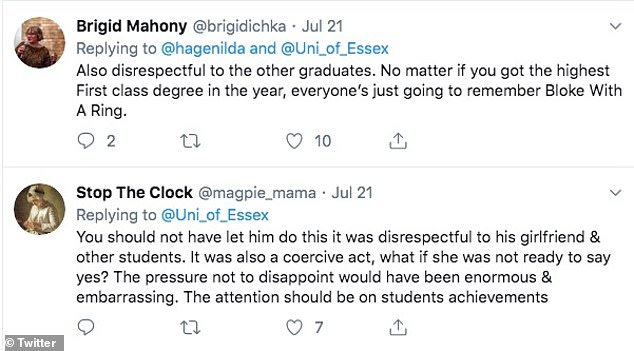 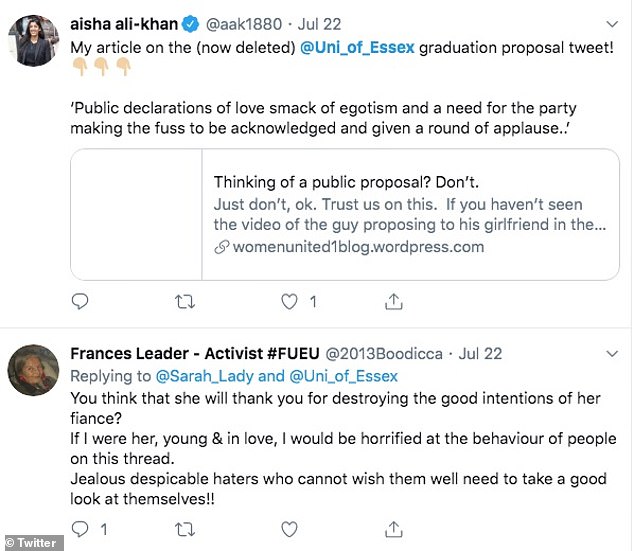 Online, the video divided opinions, with many noting that the young man should have picked another time to make his proposal

‘Not because of her achievement, but because she got her man. Bad form.”

The couple have been dating for nine years after meeting as teenagers in secondary school.

Agne has since said she was delighted by the proposal, and is baffled by the backlash.

She said: ‘I remember myself standing on the stage. I was a little bit nervous, but extremely happy.

‘Then, all of a sudden I saw Edgaras coming, but everything happened so quickly that it took me some time to understand what actually happened. 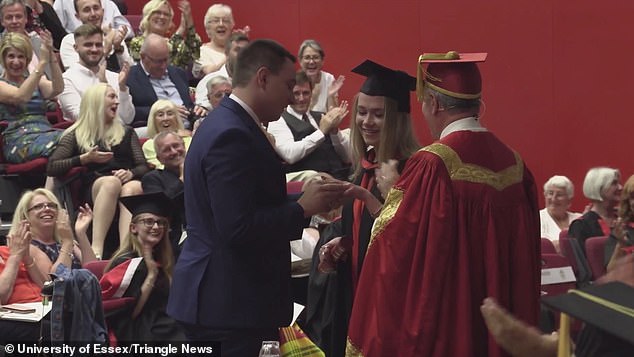 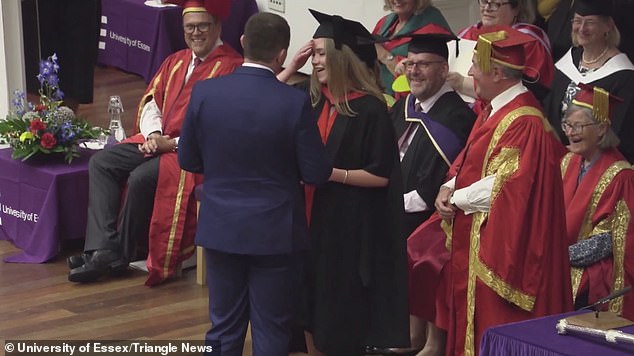 Agne has described the big moment as an ‘amazing’ surprise, but feminist campaigners are concerned that her partner Edgaras ‘hijacked’ the celebration of her intellect 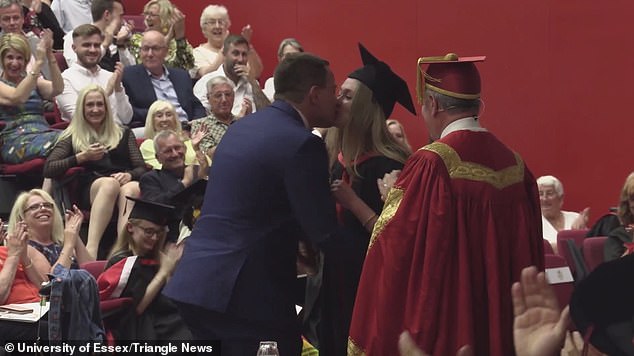 ‘He knelt on one knee and asked me to marry him. I was in so much shock and of course I said yes.

‘Everyone cheered and it was an amazing proposal which truly took me by surprise.

‘Well, I knew something was up but didn’t have a clue.’

Agne had just finished studying a Masters degree in English Language and Applied Linguistics on the Colchester campus, of the University of Essex. 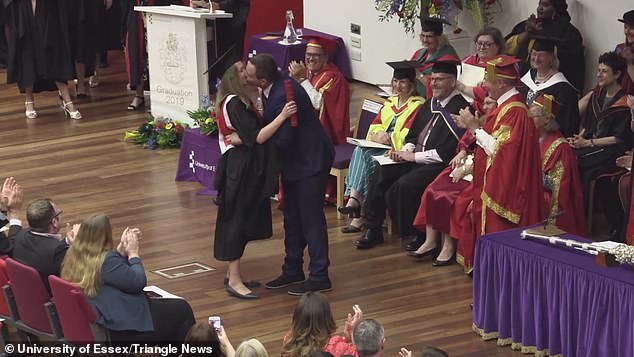 What a day: Agne got her degree and a surprise engagement on the same day and said it made the moment more special

On Twitter, the university deleted a tweet sharing the video after people accused Edgaras of ruining her moment of celebration.

But Agne revealed that she was overjoyed by the public proposal – adding that it made her day of celebration even better.

She said: ‘That’s so strange that Edgaras was getting a lot of criticism from people.

‘Well, I think that this day became even more beautiful with this proposal.’