Busy doing nothing? You may be a ‘self promoter’: People in the office who constantly fire off ‘helpful’ emails are actually trying to get ahead

They might look like the busiest people in the office, constantly firing off emails and grandstanding in front of the boss.

But many of these employees are actually ‘self-promoters’ who have mastered the art of looking industrious without actually doing anything useful, according to a study.

Researchers looked at around 200 employees in 28 teams across a range of sectors, identifying a variety of workers including the highly motivated, jobsworths and the plainly disgruntled.

Employees classed as ‘self-promoters’ played the corporate culture by appearing in a circuit of meetings and airing their views in discussions, but contributed little to the team (file picture)

About one in five teams seen as ‘highly engaged’ by employers were actually only ‘pseudo-engaged’.

They were undermined by ‘self-promoters’ who played the corporate culture by appearing in a circuit of meetings and airing their views in discussions, but contributed little to the team.

In shift work, this could mean stretching out work to fit across the hours with the least effort while appearing to be super busy.

Others just put maximum effort into ‘looking good to the boss’ and making sure that they always said the right things.

Dr Amy Armstrong, who led the research at Ashridge Executive Education, part of Hult International Business School, said: ‘It was a Machiavellian climate… where each person was out for themselves. 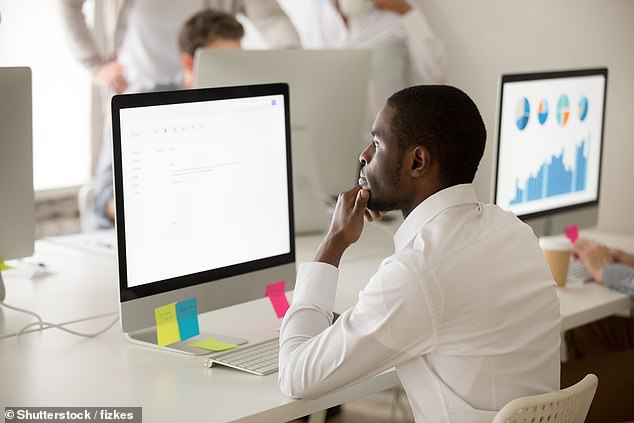 In shift work this could mean stretching out work while appearing to be really busy. Dr Amy Armstrong, who led the research, said: ‘It was a Machiavellian climate’ (file picture)

‘This was about presenting an illusion of engagement because that’s what the individuals in their teams believed their team leader wanted to hear.’

Dr Armstrong said such ‘selfish’ staff undermined teamwork and could have a negative impact on productivity.

However, the managerial system rewarded their ‘dysfunctional behaviour’. They were more likely to get promotions, better pay and bonuses and to devote even more of their efforts to their own careers – to the detriment of collective productivity.

Staff who spent their time promoting themselves in meetings were likely to benefit more than colleagues who were actually doing the work, Dr Armstrong warned.