People make fun purchases after getting their stimulus checks

With Americans across the country receiving their stimulus checks, folks are making some much needed lax purchases in addition to paying their regular bills.

On Wednesday, Americans began receiving their $1200 stimulus checks. And it was only a matter of time before people took to social media to share what they had already purchased.

‘Why did we get our stimulus check and the first thing I bought was an inflatable dinosaur costume,’ shared Destiny Zamora, who spent under $40 for the goofy costume. 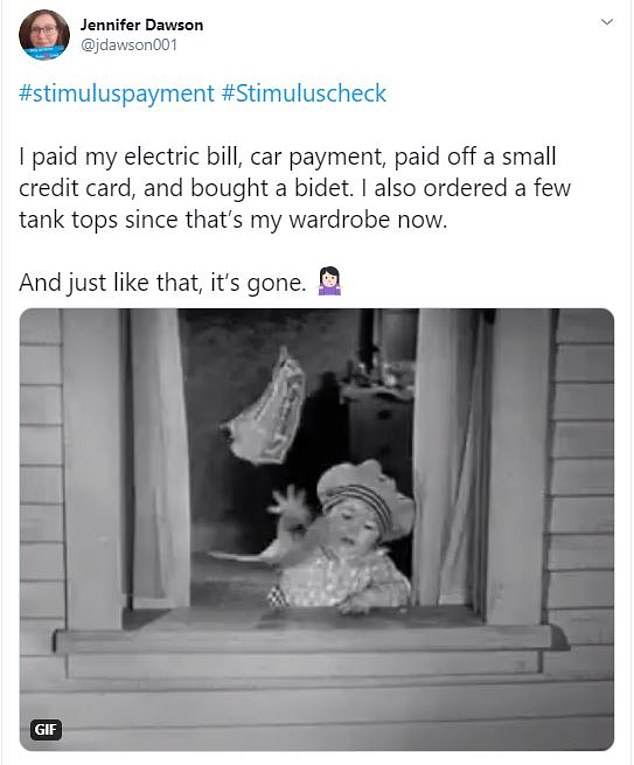 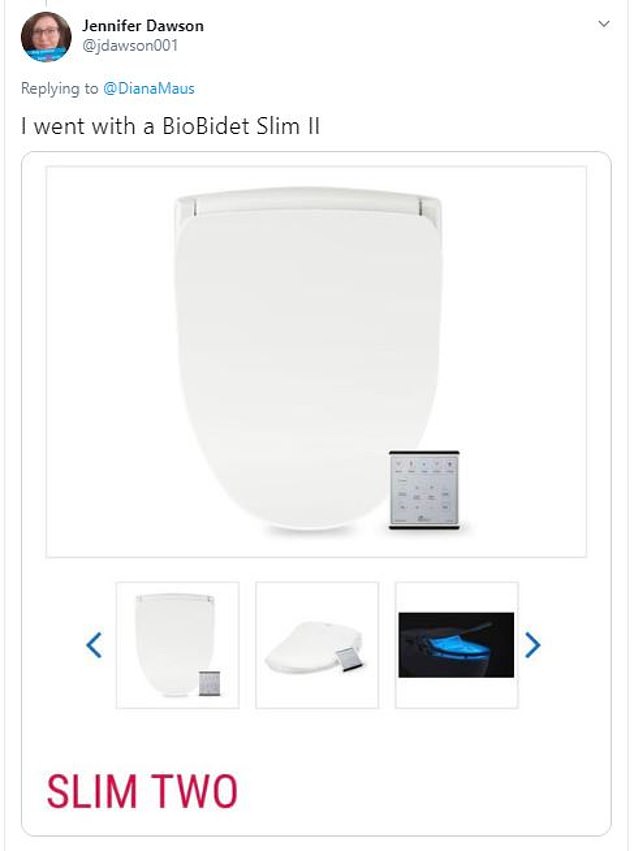 User Jennifer Dawson spent her stimulus check on an electric bill, car payment and paid off a small credit card. That didn’t stop her from also buying a bidet and some tank tops.

One ‘fairy-god’ mother gifted her child an adorable princess carriage bed set, made to look like Cinderella’s. 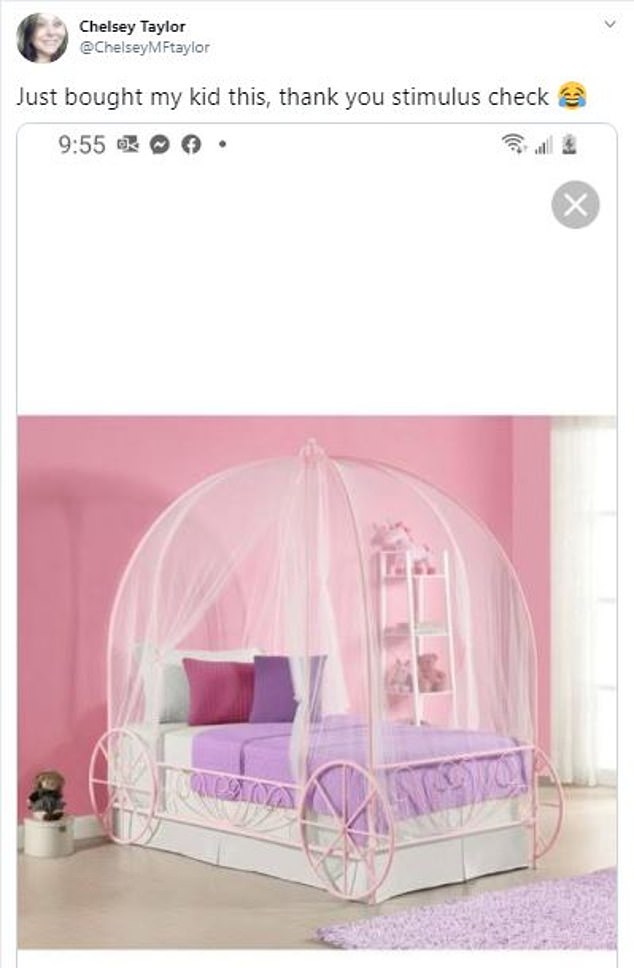 One ‘fairy-god’ mother gifted her child an adorable princess carriage bed set, made to look like Cinderella’s 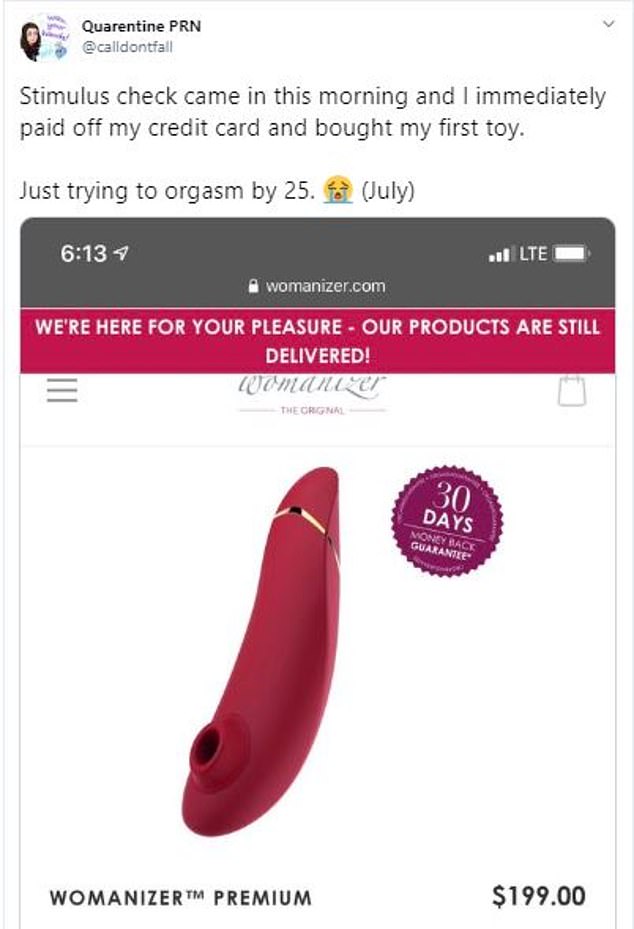 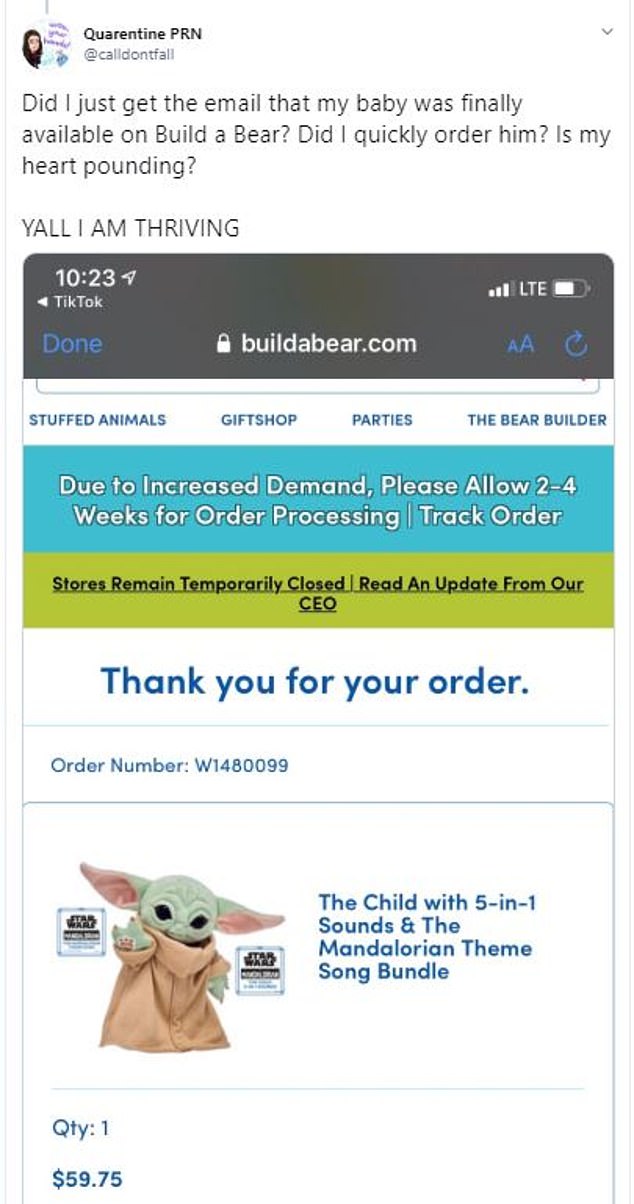 She later added: ‘Did I just get the email that my baby was finally available on Build a Bear? Did I quickly order him? Is my heart pounding? YALL I AM THRIVING’ 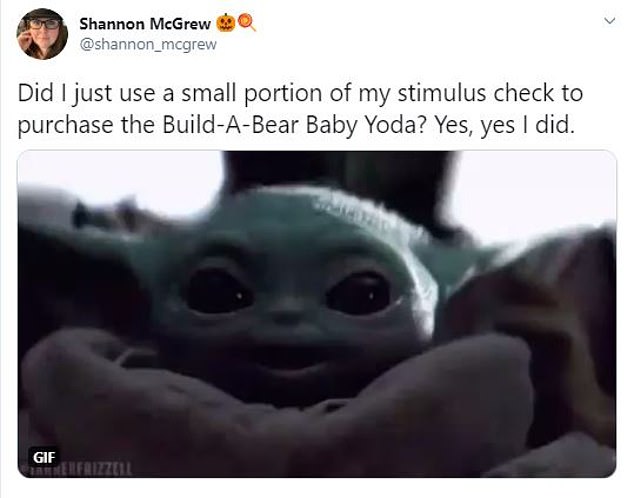 The Yoda plush was a common acquisition for some Twitter users, clearly annoyed they didn’t their hands on one in the first go-around 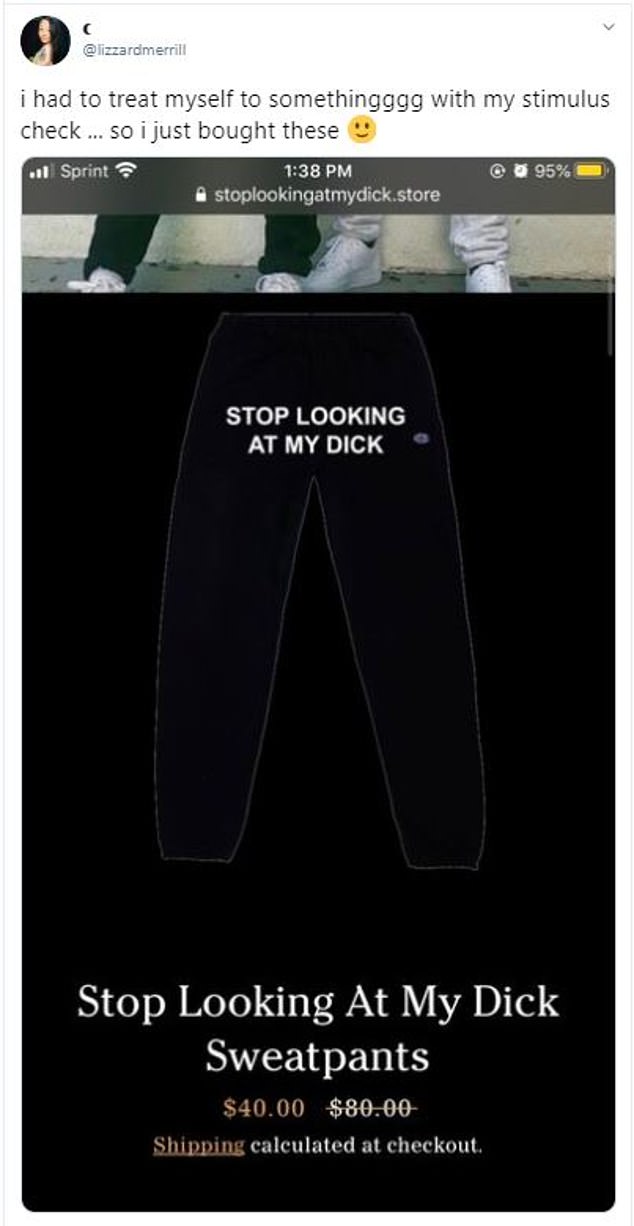 She later added: ‘Did I just get the email that my baby was finally available on Build a Bear? Did I quickly order him? Is my heart pounding? YALL I AM THRIVING’

The Yoda plush was a common acquisition for some Twitter users, clearly annoyed they didn’t their hands on one in the first go-around.

Another cheeky shopper purchased a pair of sweatpants that came with a very pointed message.

‘I had to treat myself to somethingggg with my stimulus check … so i just bought these,’ the user said. 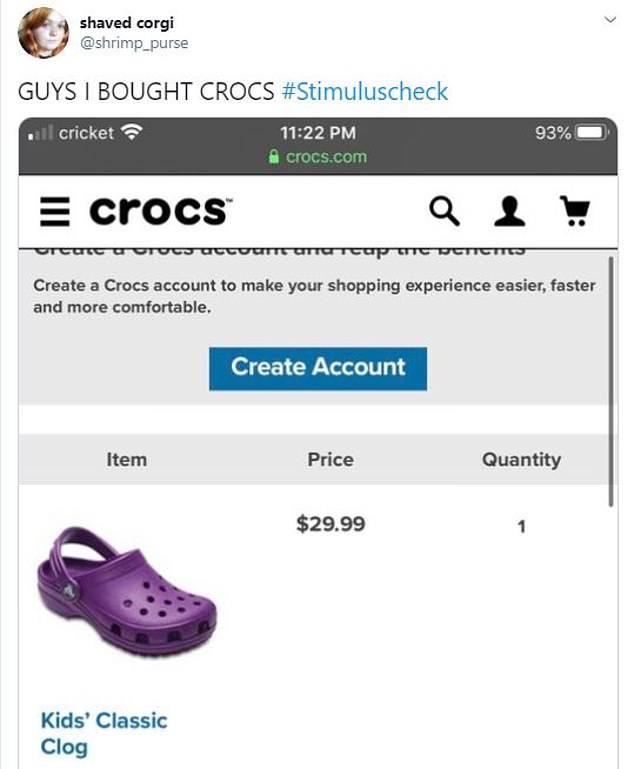 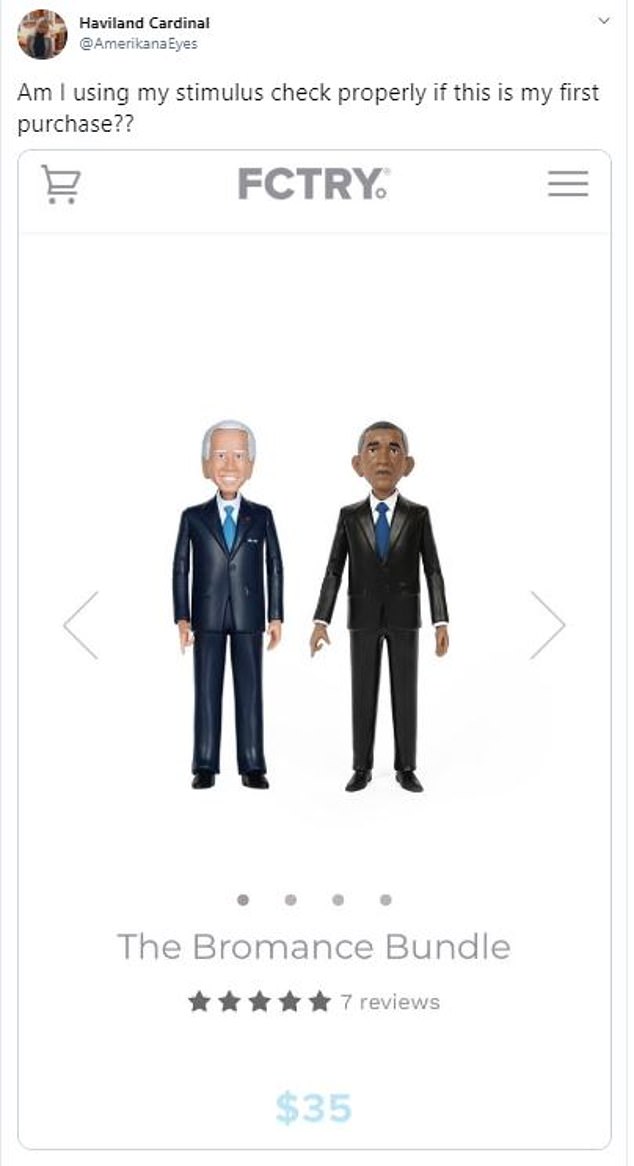 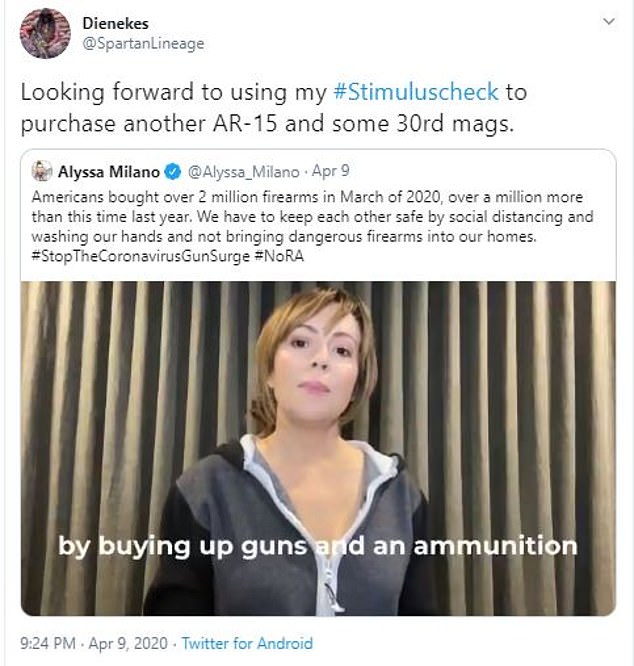 Crocs were purchased in 2020 by one user who decided to purchase a children’s size because they were ‘$10 cheaper.’

And a different person decided to purchase a pair of figurines made to look like Joe Biden and former President Barack Obama.

One person reshared a tweet made by Alyssa Milano decrying the increased purchase of guns for the month of March 2020. They asserted that they would be using the check to make more gun purchases.

The individual stimulus checks are part of the $2.3 trillion aid package passed by Congress and signed by Trump last month. 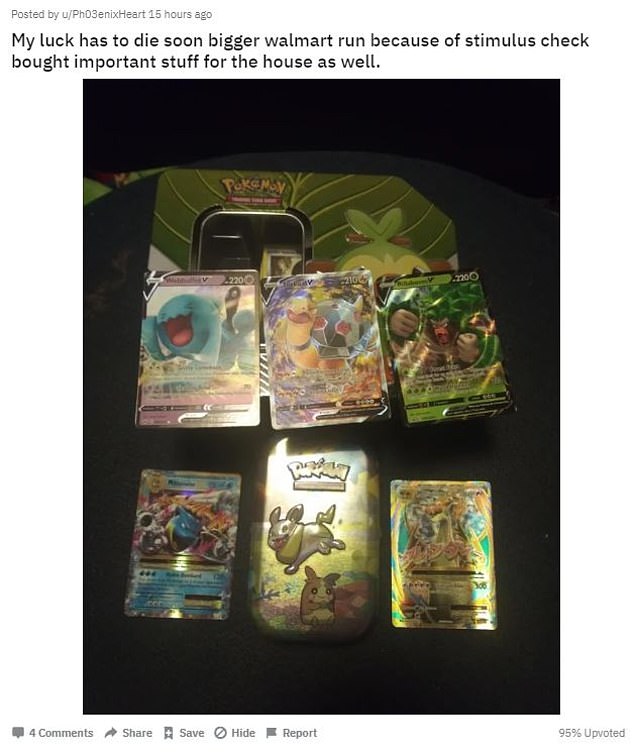 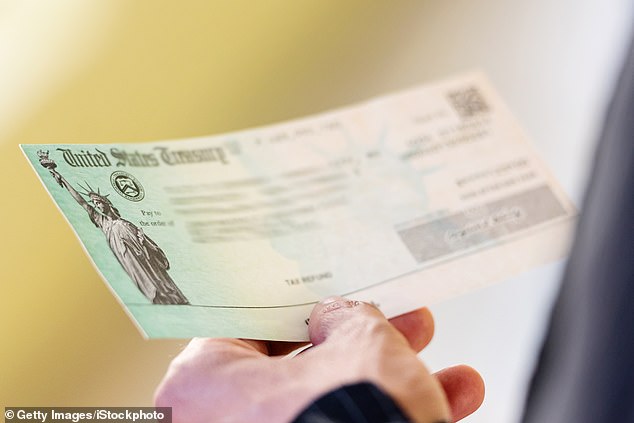 The individual stimulus checks are part of the $2.3 trillion aid package passed by Congress and signed by Trump last month

For those who did not file a return in either year, the IRS has an online form to provide payment information to receive a direct deposit or check.

The IRS has already begun issuing the one-time payments this week. Direct deposits are expected to go out faster than the physical checks.

To track the stimulus payments, the IRS made its tracking tool available on Wednesday.

Users must enter a Social Security number, date of birth and mailing address in order to track their payment.

The site will respond with a payment status, type and requests for more information, including bank account details, if needed.

Americans who filed their 2018 and 2019 taxes, as well as the lowest earners, should be among the first to receive their checks, the IRS has said, reports CNN.

People who haven’t been required to file a return for those two years will likely have to enter additional information online.

Aside from the potential for delays because of the president’s request to have his signature on the checks, millions of Americans also may not see their payment sooner because they didn’t authorize direct deposit.

The Treasury has set up its own new web portal, where updated information can be entered. 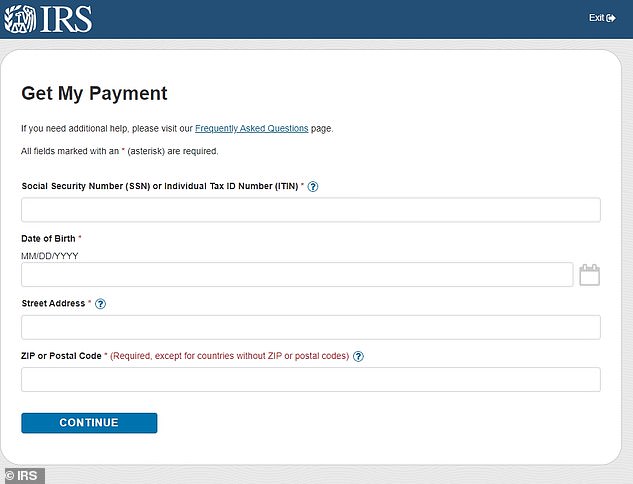 To track the stimulus payments, the IRS made its tracking tool available on Wednesday

The Get My Payment tool will allow taxpayers to input their bank account information so they can receive their payment electronically, as opposed to a paper check that might take weeks, or even months.

Low-income earners who did not make more than $12,200 last year or married couples who did not earn more than $24,400, and who do not normally file tax returns will have to take several actions to get their payments.

Most will be able to provide the required information with the new online tool, which is very ‘very straightforward, and likely much faster, than requiring non-filers to fill out and submit a tax form,’ Erica York, an economist at the Tax Foundation, tells CNN.

Alerting those persons is the challenge, especially for those who do not have access to the internet, she said.

WHAT WILL I GET AND HOW WILL I GET IT? YOUR GUIDE TO THE BAILOUT CASH

The source of your income is irrelevant, meaning social security recipients are eligible too.

How do I work out whether I am eligible?

That is not the amount on your paycheck but your total income minus some permitted tax deductions including student loan interest payments – and your AGI can be found on your 2018 or 2019 tax return.

You also have to be a citizen or permanent resident, meaning workers on visas and undocumented – or illegal – aliens will not get cash despite having paid taxes.

How much will I get if I am a single filer?

I’m a single parent – how am I affected?

What about married couples?

The limits for married couples to get payments is simply double that for single filers. So if your joint AGI is under $150,000 you get a full payment of $2,400. Payments taper down and no couple with an AGI above $198,000 get a payment. Parents get $500 per child.

How will I get paid – and when?

That depends on how you – or your tax filer – filed your tax return in 2019 or 2018. If you gave your bank account details for your refund to be directly deposited, your payment will come directly and could come as early as Wednesday.

The same applies if you receive Social Security retirement or Social Security Disability Insurance benefits – your payment will go direct into your bank account. That also applies to people who receive payments from the Railroad Retirement and Survivor Benefits scheme.

But if you opted for a check from the IRS, you will get your bailout payment by check. It will take the IRS 20 weeks to print the full number of checks it is anticipating sending out.

I didn’t file a tax return and I’m not on Social Security. Will I miss out?

People with incomes below $12,200 – $24,400 for couples – do not have to file federal tax returns but they are eligible. However you need to sign up at the IRS website’s special section to get the payment.

What if I don’t have a bank?

The government has still to specify any help for people without banks to cash their checks without paying fees but there have been calls for it to ask big banks to do so.

No. The checks are based on what people earned in the last tax return which is on file. So many people who lost jobs paying above the limit will get no help from the scheme. It is possible that the IRS comes up with a way to issue payments to such people in the future.