People will say and do the darnedest things when they are under heavy medication – at least if one hilarious new Twitter thread is anything to go by.

As part of a viral trend sparked by Utah-based Nicole Cliffe, people are sharing details about the strangest things they have done while taking strong painkillers or sedatives, with many users happily revealing a wealth of information about their wild experiences.

Indeed, most of the stories shared are totally nonsensical, with their tellers explaining that they were completely unable to give a reason for why they said or did the things they had – only that their medication made them go slightly crazy for a short period of time.

Under: People are taking to Twitter to share the weirdest things they’ve said or done while sedated or medicated after surgery 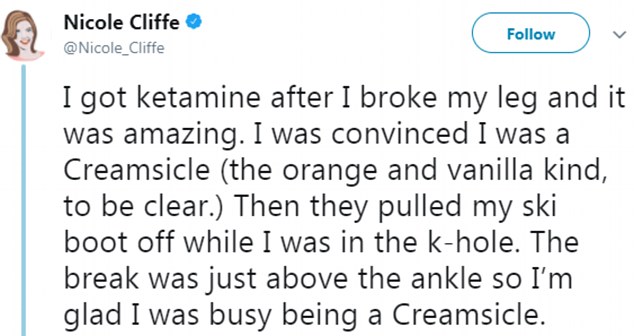 Ice cream: Writer, Nicole Cliffe kicked off the conversation by sharing her own personal experience when she imagined she was a Creamsicle 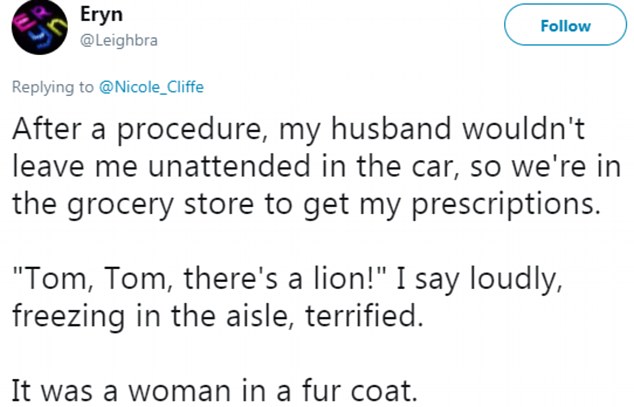 Lion: One woman explained how she was sedated in the grocery store with her husband and thought a woman in a fur coat was a lion

After Nicole kicked off the conversation saying, ‘Okay, I am here for your amusing/terrifying medical sedation stories at the current time,’ people could not stop sharing.

Nicole started with her own personal experience, ‘I got ketamine after I broke my leg and it was amazing. I was convinced I was a Creamsicle the orange and vanilla kind, to be clear.

‘Then they pulled my ski boot off while I was in the k-hole. The break was just above the ankle so I’m glad I was busy being a Creamsicle.’

Another one replied with her own hilarious story saying, ‘After a procedure, my husband wouldn’t leave me unattended in the car.

‘So we’re in the grocery store to get my prescriptions. “Tom, Tom, there’s a lion!” I say loudly, freezing in the aisle, terrified. It was a woman in a fur coat.’

Bizarre: For no explainable reason, this man preferred Sprite to 7-Up because it was cleaner 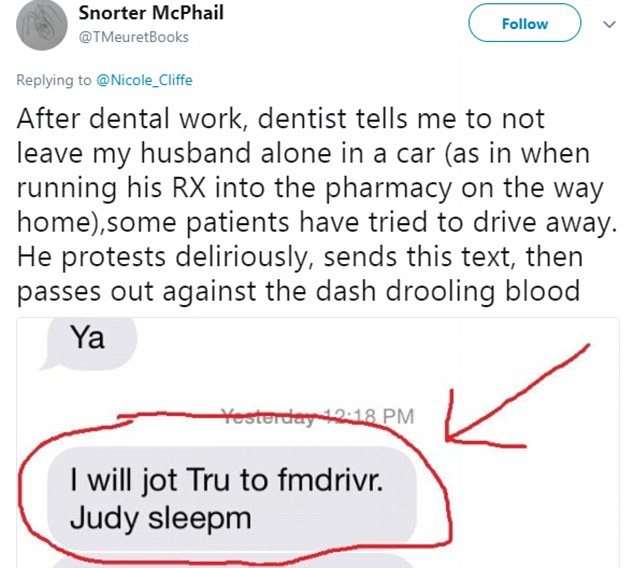 Unbelievable: This is a real life text a husband sent his wife while sedated and it’s gibberish

Lion King: One girl woke up crying and screaming ‘Mufasa died’ about the scene from the movie the Lion King 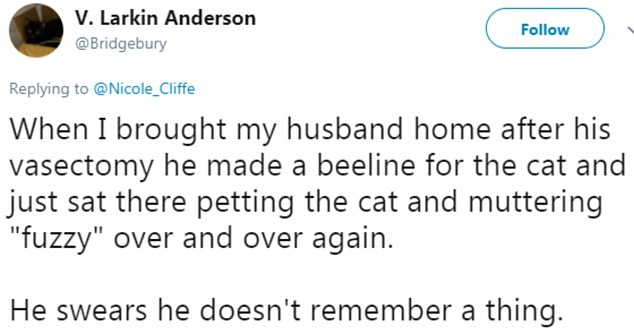 Meow: This woman described what happened when her husband came home after surgery and couldn’t stop petting their cat

One very revealing situation happened to one woman who never told her Southern Baptist conservative mom that she was gay.

The woman had dental surgery and woke up from anesthesia asking her mother if she hated her because she was gay and she fully came out to her mom under anesthesia.

A very patient wife shared, ‘When I brought my husband home after his vasectomy he made a beeline for the cat and just sat there petting the cat and muttering “fuzzy” over and over again. He swears he doesn’t remember a thing.’

One arthroscopic knee surgery patient woke up in the recovery room when the nurse asked him if he wanted a 7-Up and he hilariously replied, ‘No, I’d rather have a Sprite, because it has a cleaner finish.’

Crying is a very common side effect when you wake up from sedation after surgery and many people have had some sort of bizarre crying story to tell. 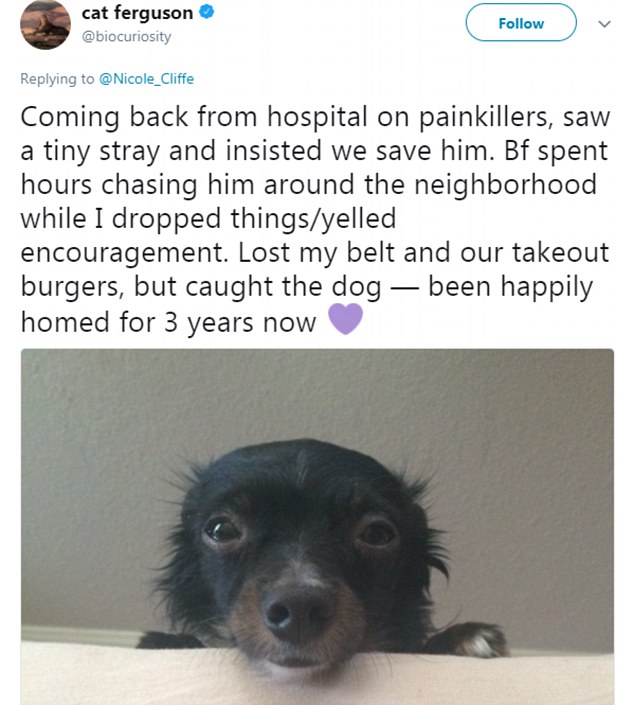 Happy ending: In a twist of events, one highly medicated woman was on her way home from surgery when she made her boyfriend chase after this stray dog who now lives with them

Gross: This woman must seriously hate Arby’s if just the thought of it makes her puke

Competitive: After this guy came out of surgery all he wanted to do was play games with the staff

When one girl woke up from surgery she was full-blown sobbing and when the nurse asked her what was wrong she screamed, ‘MUFASA DIED.’

In a very sweet and lucky situation, a woman was on her way home from the hospital on painkillers when she saw a tiny stray dog on the side of the road.

She made her boyfriend chase the cat around the neighborhood for hours all while yelling and losing their takeout food.

In the end, they managed to catch the dog who has lived with the couple for three years now in a happy home.

Someone who seriously detests the fast food chain, Arby’s, explained what happened when she got home after surgery and saw a commercial for the restaurant on TV. 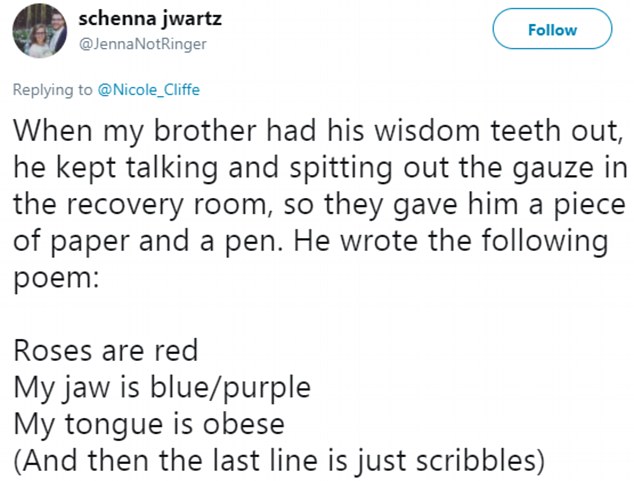 Poetry: When one boy was in recovery, he started writing bizarre poems on a piece of paper

Uh oh: In this hilarious situation a woman was 22 when she had dental surgery and was dating a man that was 32 and everyone thought he was her dad 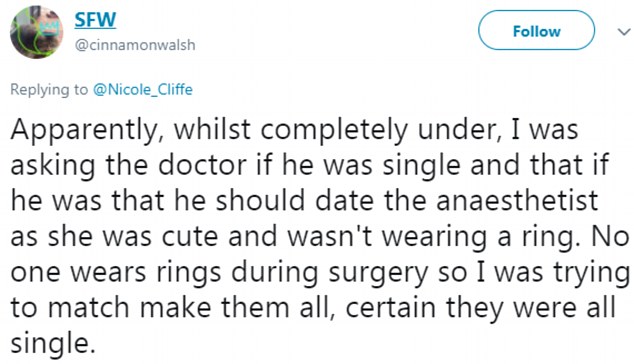 Cupid: This patient decided to play matchmaker with the hospital staff while sedated

She explains that while sedated, she opened her mouth to scream, ‘I hate Arby’s’ and instead she projectile vomited on the television screen.

Another hilarious story one woman shared was the time she had her wisdom teeth removed.

‘I was so amused/drugged that I kept saying “I’m having sex with my dad.” People were very concerned.’ 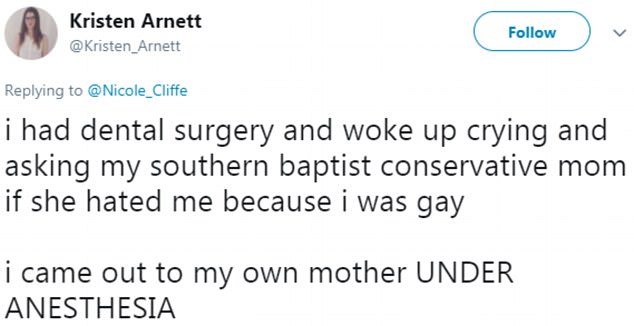 Wow: One girl shared that she came out as gay to her mom while under anesthesia 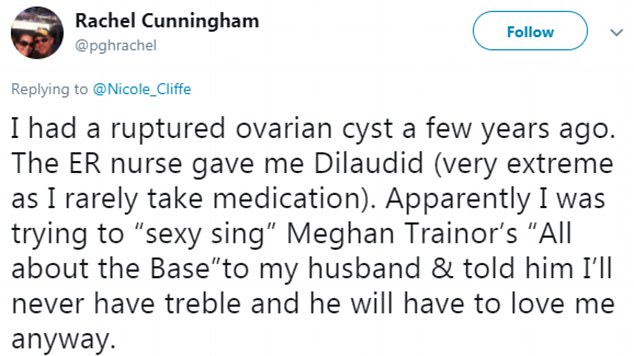 True love: This woman explained she started singing to her husband telling him to love her for who she is

One woman was surprised to learn she was fluent in another language when she woke up from anesthesia.

‘I woke up after an endoscopy and could only speak English for an hour which is a bit odd, considering I live in Brazil,’ she wrote.

‘Half the staff plus my poor grandma who was with me couldn’t understand a word I was saying. “Portuguese is so hard,” I said.’

In a hilarious text exchange, one woman explained that after her husband had dental surgery, the dentist told her not to leave her husband alone in a car.

She said he was delirious and kept protesting until he finally sent a jumbled up text message to her, only to pass out on the dashboard while drooling blood.