Spending the night with a stranger can be no-strings-attached fun but sometimes things become awkward the next day, as these confessions reveal.

People from around the world took to anonymous sharing app Whisper to share the most uncomfortable things they were told after a one night stand.

Many people said they were left shocked after their fling admitted to having a spouse, while others confessed they felt awkward when the person they were sleeping with tried to make plans to see them again.

One woman, from Milwaukee, claimed she was left speechless when her one night stand said he was ‘falling for her’.

Elsewhere, one man, who lives in Washington, revealed he felt awkward after the woman he spent the night with confessed it had been her first time having sex.

People from around the world have taken to anonymous sharing app Whisper to reveal the most uncomfortable things they’ve been told after a one night stand – including a woman, whose fling confessed to being married 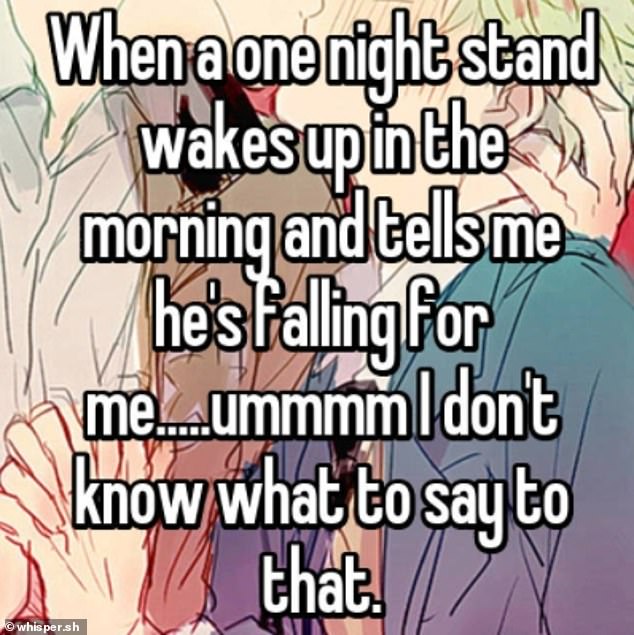 Unrequited love! A woman, who lives in Milwaukee, admitted that she was left speechless after her one night stand claimed to be ‘falling’ in love with her 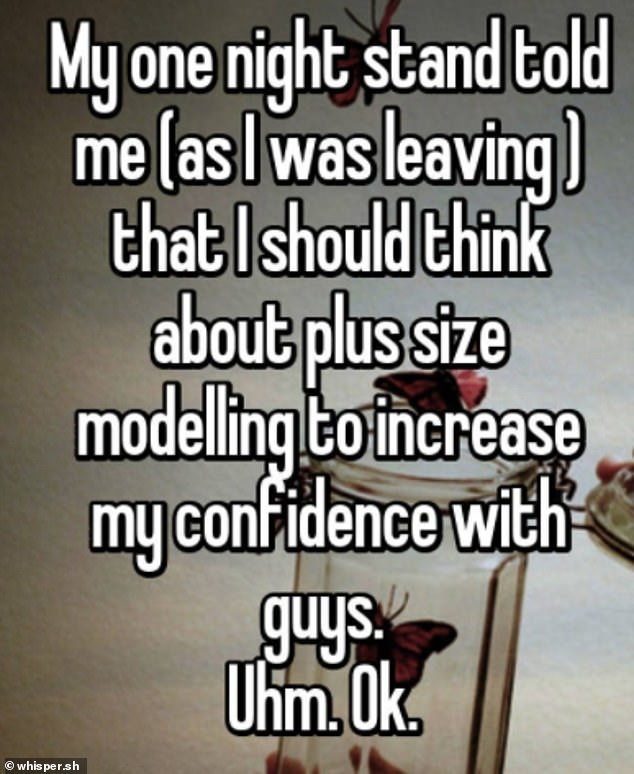 One woman, from London, was baffled after a man told her to think about doing plus size modelling to increase her confidence with men 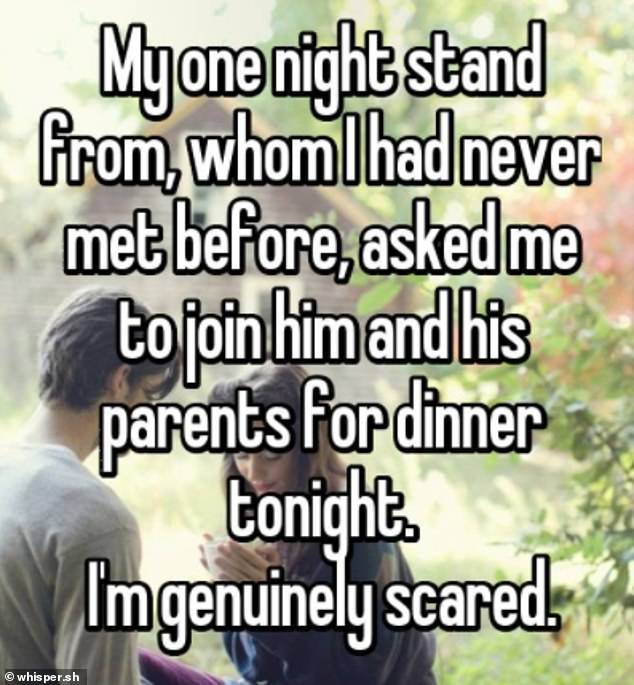 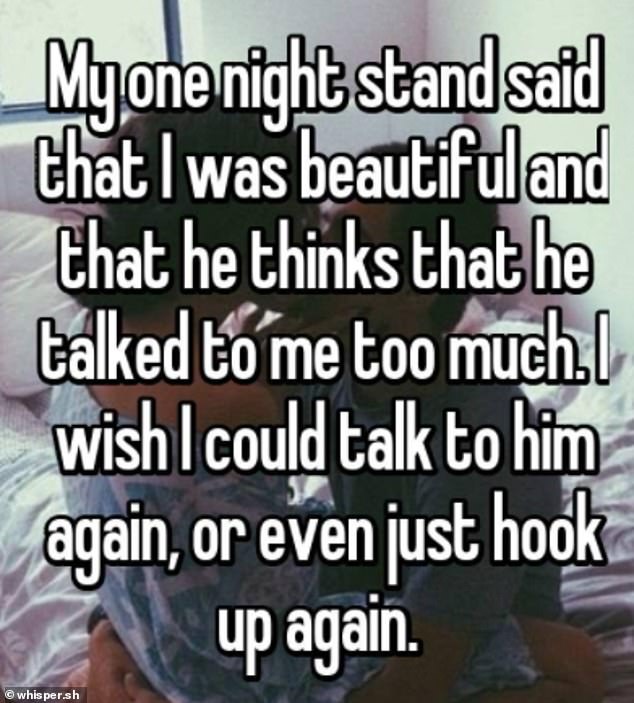 Out of touch! A woman, from Canada, shared the regret of not staying in contact with a one night stand who called her ‘beautiful’ 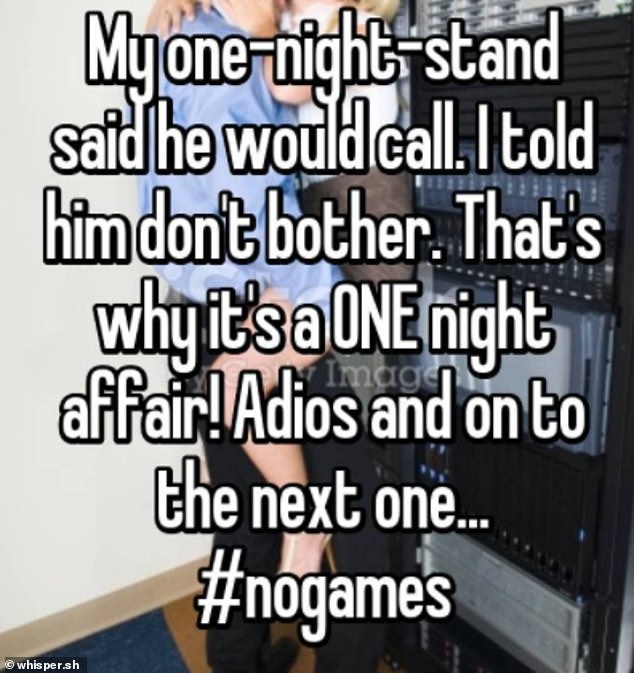 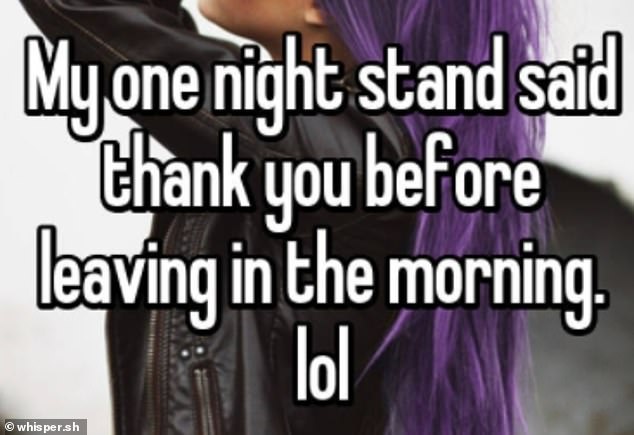 Another person, from Australia, was left in hysterics because their one night stand said ‘thank you’ the morning after 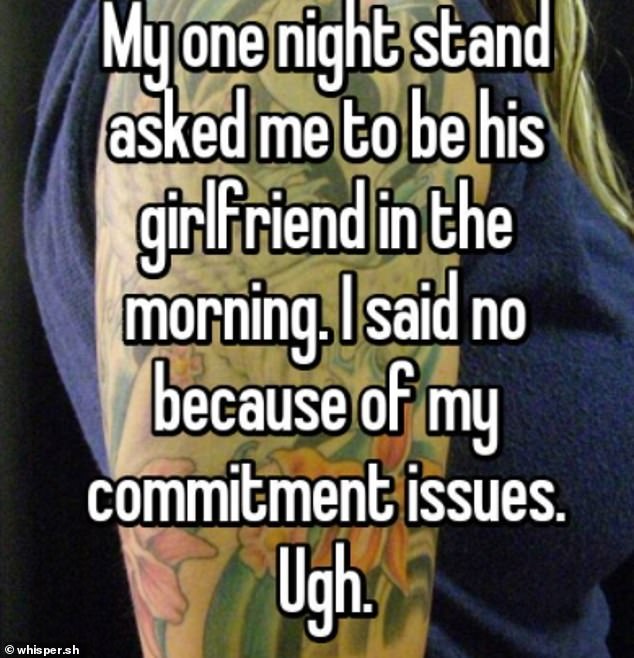 A woman, who lives in Florida, revealed she said no to being her one night stand’s girlfriend because she has commitment issues 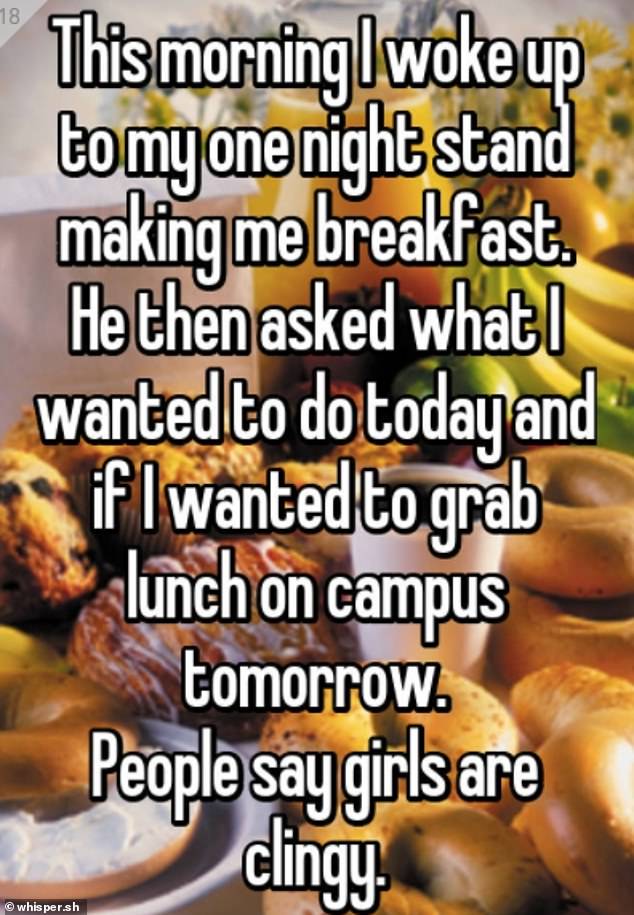 Food is the way to the heart! A woman, who lives in the U.S, claimed she woke up to her fling making her breakfast and suggesting plans for lunch 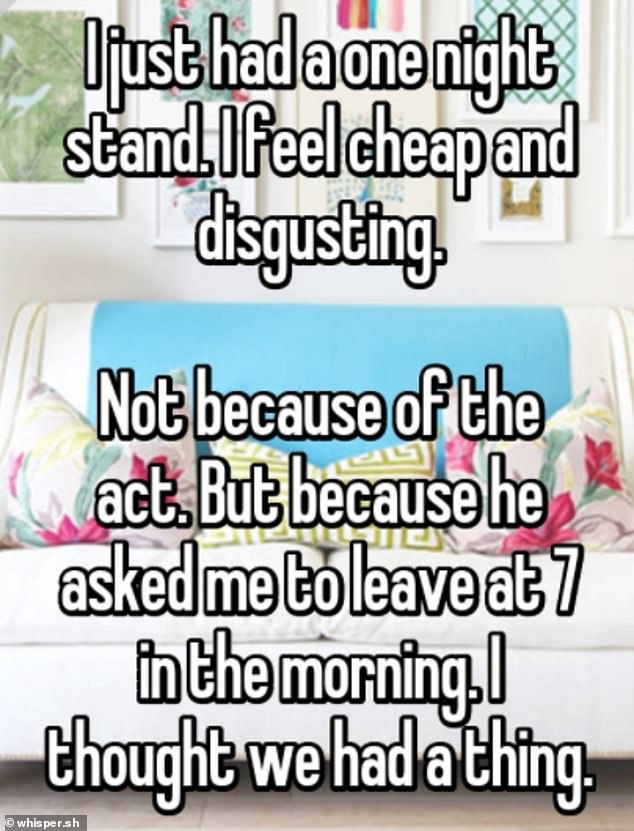 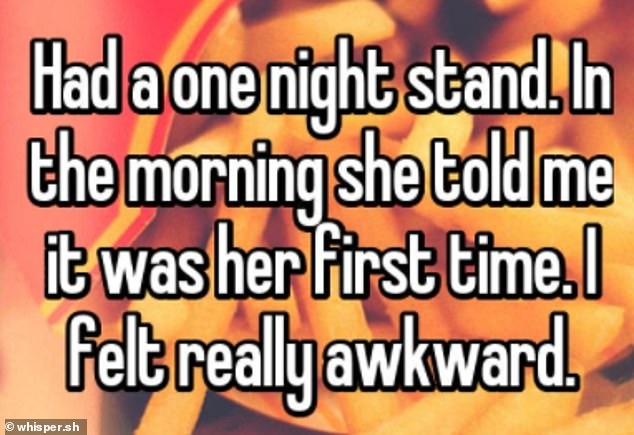 One man, who lives in Washington, confessed that he felt ‘really awkward’ after his one night stand confessed it was her first time 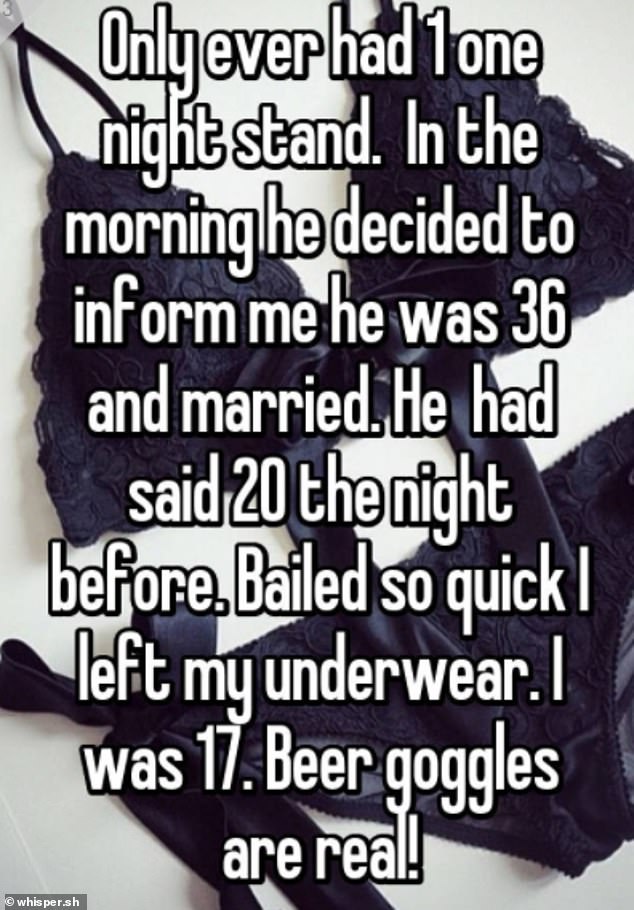 Truth comes to light! A 17-year-old woman said she ran away from her one night stand after he confessed to lying about his age 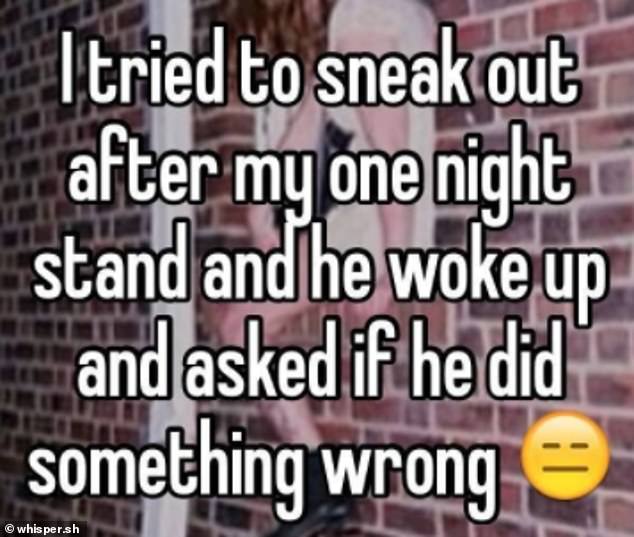 A woman, from California, said her one night stand asked if he had done something wrong after waking up to see her trying to sneak out 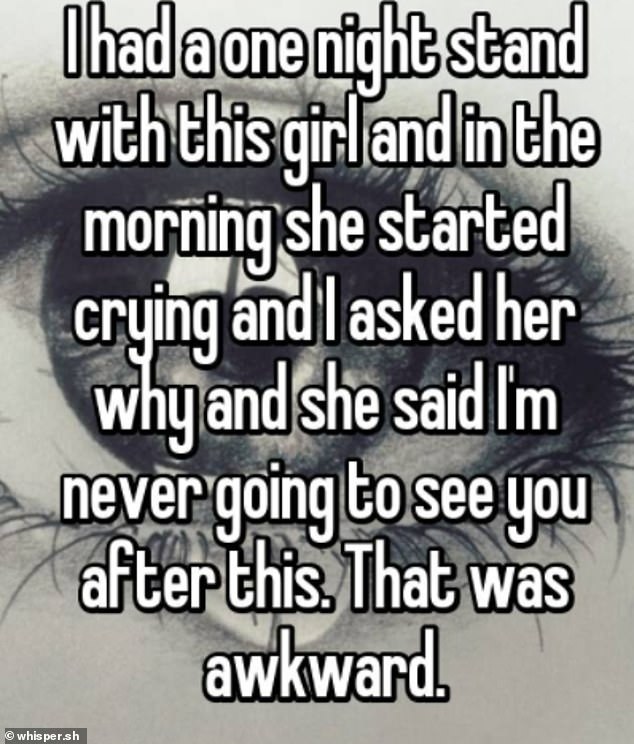