People have revealed the pettiest things that annoy them most about other parents – despite knowing they’re ‘pathetic.’

One UK-based anonymous user offloaded their biggest bugbear on British parenting site Mumsnet and penned: ‘Mine is probably when people say they’re doing ‘a bit of traditional weaning and a bit of baby led weaning (BLW)’.

‘You can’t half do BLW… traditional weaning is purees AND finger foods, BLW is your child ALWAYS feeding themselves regular food.’

The person went on to admit they ‘internally eye-rolled every time’ and wished they could ‘let it go’ – before asking others from across the nation to reveal what really grinds their gears.

From talking in baby language to boasting about a pain-free labour, the post was inundated with responses from fellow frustrated mothers and fathers who revealed their very amusing pet hates.

People from across the UK have revealed the pettiest things that annoy them most about other parents. Pictured, stock image

And it seems emotions are running high among parents following lockdown, after many took to the thread to complain about the smallest of things.

‘Mothers who talk endlessly about how easy labour was and how all they needed was a puff of gas and air. Often with comments about their high pain tolerance,’ wrote one. ‘Never seem to consider that their labour was just easier then some women’s or that they were lucky. Gets my back up every time.’

Elsewhere, a further noted that those mothers and fathers who always try and get one up on others really drives her around the bend.

Another frustrated parent vented: ‘Being constantly told that “girls are easier than boys….” No, Sandra, yours is just a little s***t!’

Meanwhile, others noted that it put their backs up when they are judged or given unwanted opinions by others.

‘Being lectured about how my child should watch TV….. I don’t judge people for using whatever tech they want to so why does my not using it seem to be such an issue??’ wrote one.

In response, a third replied: Same with “enjoy the cuddles” when they’re newborn. NO F*** OFF I JUST WANT A SECOND TO MYSELF.’ 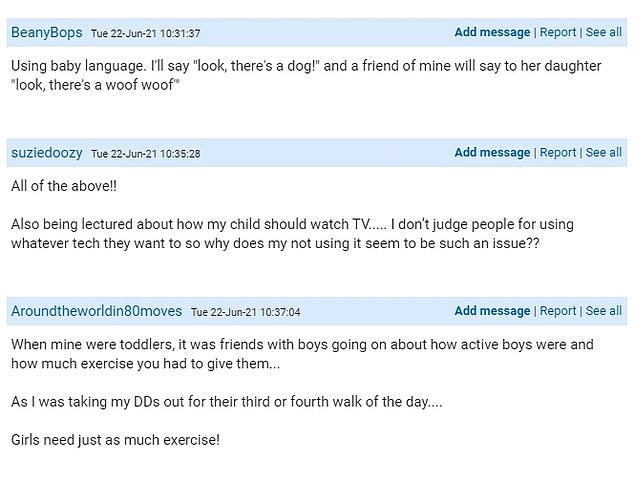 Elsewhere, some parents told how they get frustrated when parents dishing out labels too easily.

Explaining their pet peeve, one person explained: ‘Anyone who puts a label on how they raise their kids – “gentle parenting’. Bloody ridiculous. What are the rest of us then? Rough parenting? Just crack on and shut up.’

A second, whose biggest pet peeve was when it came to allergies, explained: ‘It seems to be the coolest thing now if you kid has an intolerance to something.’

Others told how they are often left infuriated when people who think they know their children better than they do. 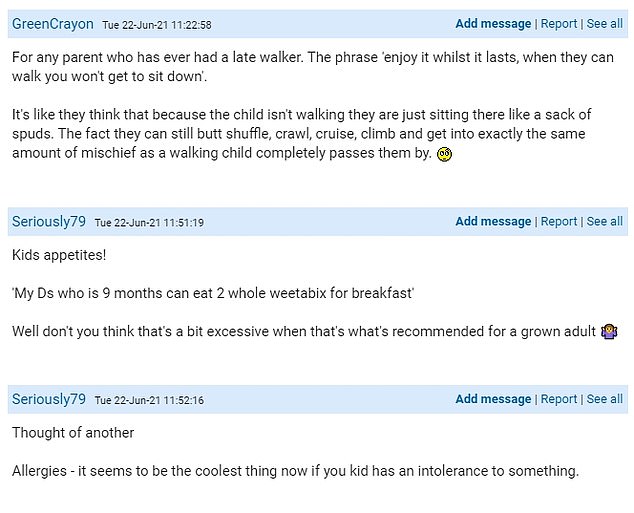 Another, whose biggest pet peeve was when it came to allergies, explained: ‘It seems to be the coolest thing now if you kid has an intolerance to something’ (pictured)

‘When people tell me “They’re probably teething” to explain why my 16 month old is in a foul mood, or playing up,’ wrote one. ‘It’s not an excuse for everything. I’d like to think I know my own child by now.’

A second commented: ‘When people tell me “shouldn’t your DD be sleeping through the night?” In other words 7pm-7am with no wake ups. Nope but she’s still a pretty good sleeper to me, considering she’s only 8 months. Gets on my nerves everytime someone says it to me.’

Another who is halfway through her pregnancy told how she has been ‘bombarded’ with people giving ‘advice.’

‘I even had one person I know spam me with lists and lists of baby names because she didn’t like my own list of names,’ she wrote. ‘I dread when I actually have the baby , my head will be wrecked with people insisting their way is right… while their own children are feral and screaming.’