Do YOU have wedding day regrets? Brides reveal the things they’d change if they could do it all again – including one who ended up wearing a tablecloth for the reception because she didn’t buy a second dress

Even if you spend months creating mood boards, hiring wedding planners and poring over every last day, it’s possible to finish your big day with regrets.

Facebook users from around the UK took to the Family Lowdown Tips & Ideas group to confess things they would change about their wedding day, including the choice of DJ, guest list and even the time of the ceremony.

The discussion started after member Hollie Marie Smith uploaded a photograph of herself wearing a table cloth at her reception after making a decision not to bring a change of outfit for later in her wedding day.

Hollie’s post racked up almost 1,000 responses as people vented disappointments from their big day, with multiple people saying they were disappointed with their photographer or DJ, while others regretted their choice of underwear. 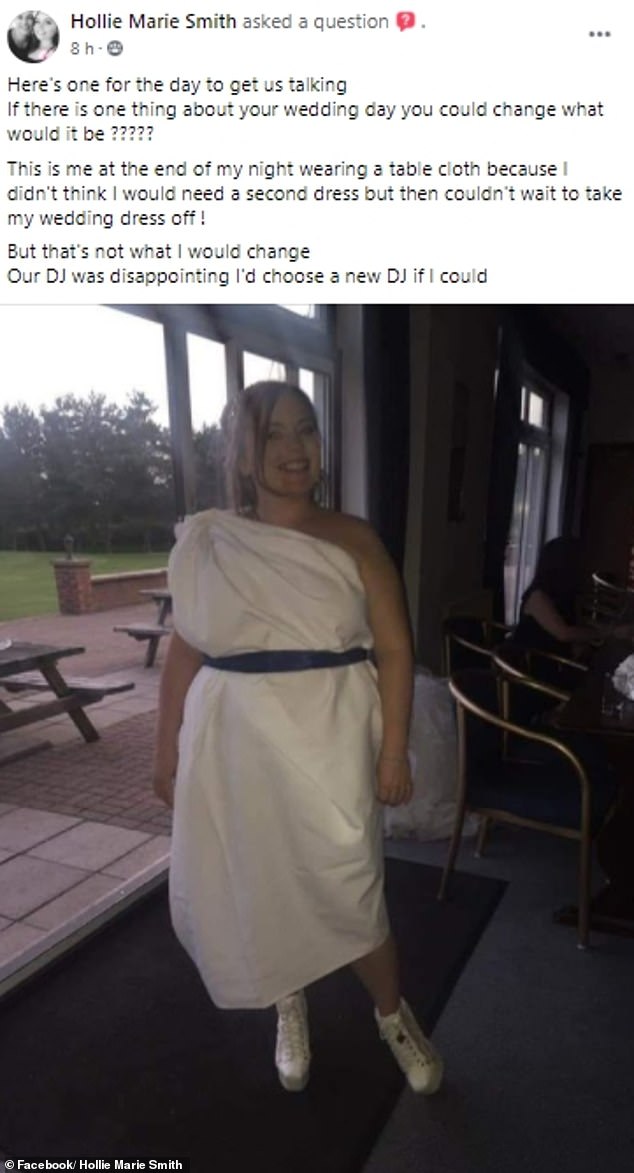 Hollie Marie Smith (pictured), who used a table cloth as her second dress, said she regrets her choice of DJ

Hollie kicked off the discussion by saying: If there is one thing about your wedding day you could change what would it be?’

She shared a photo of herself wrapped in a table cloth and secured around the waist with what appeared to be someone’s tie.

‘I didn’t think I would need a second dress but then couldn’t wait to take my wedding dress off,’ she explained. ‘But that’s not what I would change. Our DJ was disappointing I’d choose a new DJ if I could.’

Another regretful bride said that she would have hired a different photographer if she could go back in time.

‘She was too busy taking pictures of my harpist and bridesmaids to get the shot of my dad walking me down the aisle. It actually breaks my heart because my dad’s passed now,’ she recalled. ‘And I only have a picture of us from the side that my friend managed to capture.’

Another said: ‘I booked a Daimler Limousine, his wife called to say he was on his way and to wait outside. I waited and waited, he didn’t turn up. We were at my mum’s house and my brother and I shut the door behind so was stuck outside waiting and it was a really hot day.

‘I had to get a ride with my mum’s neighbour and I later found out the driver was pulled over for drink driving. I was an hour late for my wedding.’

‘If I had to change one thing… I would change the time we got married to an earlier time so the day lasted longer,’ a third added.

Another said: ‘If I could turn the clock back, I’d have had a videographer. I was adamant I didn’t want one and have regretted it ever since. Especially as our photographer was rubbish.’

Many revealed the greatest regret from their wedding day took place at the reception, with some wasting money on guests who didn’t come and others hating the music played by their DJ.

For another bride, it was her choice of underwear that caused the problem.

One wrote: ‘My knickers. I wore G string diamante knickers for our UK reception (we got married abroad) and as soon as I stepped out the car on arrival I felt this ‘ping’ as one of the links snapped and my knickers slid down my leg. 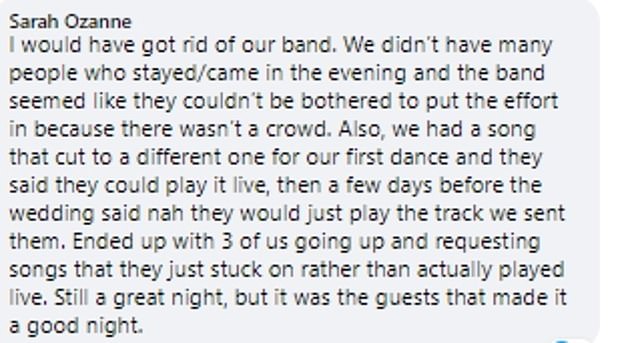 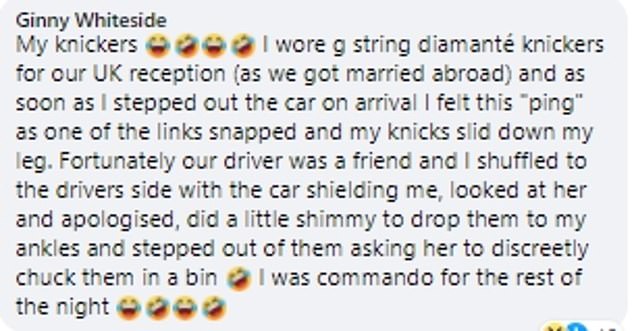 ‘Fortunately our driver was a friend and I shuffled to the driver’s side with the car shielding me, looked at her and apologised, did a shimmy to drop them to my ankles and stepped out of them asking her to discreetly chuck them in a bin. I was commando for the rest of the night.’

Another said: ‘I would have got rid of our band. We didn’t have many people who stayed/came in the evening and the band seemed like they couldn’t be bothered to put the effort in because there wasn’t a crowd.

‘Also, we had a song that cut to a different one for our first dance and they said they could play it live, then a few days before the wedding said nah they would just play the track we sent them.

‘Ended up with three of us going up and requesting songs that they just stuck on rather than actually played live. Still a great night, but it was the guests that made it a good night.’