People have shared the life-changing advice they’ve learned, during therapy, in a viral Twitter thread.

Caroline Moss, an author from Brooklyn, New York, took to the social media site to ask for the wisdom people have received from their therapists.

She said in her tweet: ‘If you go to therapy quote tweet this with the best thing you learned at therapy that way everyone else can get free therapy.’

The author, who has written children’s and adults books, opened up the floor to comments from Twitter and received a fluffy of responses, and nearly 50,000 likes on her tweet.

People’s responses ranged from self care advice to how to deal with confrontation and even grief.

Caroline Moss, an author from Brooklyn, New York, took to the social media site to ask for the wisdom people have received from their therapists

Some spoke about the advice they’ve been given to stay healthy. One tweeted: ‘If you take care of your body during times of crisis – it will take care of you” (nutrition, sleep, exercise).

While others spoke about how you don’t have to stick to routine: ‘The best thing a therapist ever told me is that society doesn’t need to be the one to set my schedule. I’m allowed to eat breakfast at 11, go to bed at 1am. There’s no correct mold to fit, just find whatever works best for me.

While another responded saying: ‘Sometimes I’m super tired at like 7:30pm but I force myself to stay up til a later, more “normal” bedtime and then I’m even MORE exhausted and deal with bad fatigue all the next day and my therapist told me that if I’m tired at 7:30 I can just…go to sleep. It was life changing.’

While others spoke about confrontation and arguing: ‘I grew up in a house of screaming & fighting. So when I learned that yelling = a feeling of loss of control it was life changing. Hubby & I have raised our voices to each other twice in 21 yrs because we don’t control each other. We are equals. So we discuss things,’ another tweet said.

The author opened up the floor to comments from Twitter and received a fluffy of responses, and nearly 50,000 likes on her tweet 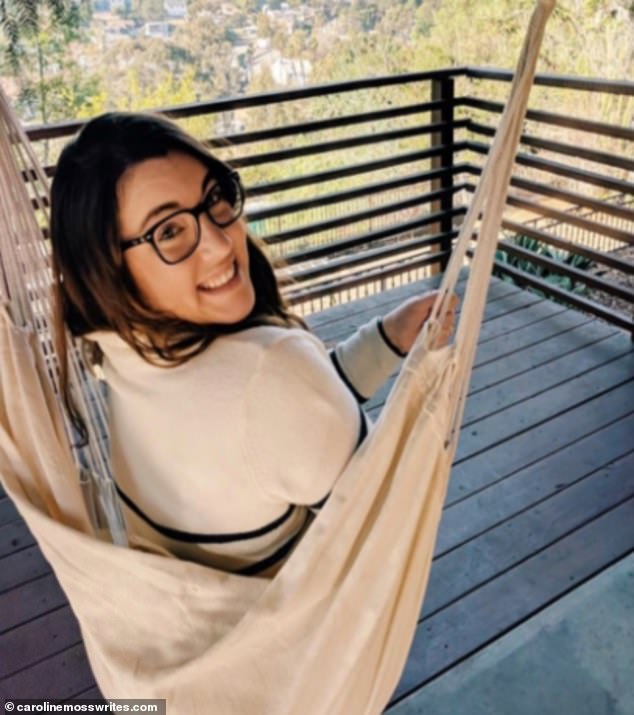 Caroline, an author and journalist, later said that she was overwhelmed with how many people had left comments

While another shared this piece of advice from a therapist: ‘Confrontation doesn’t need to be a bad thing or an argument. If you’re having trouble talking about a problem, try writing down a bullet list of the issues, why it’s an issue/where it might stem from for you, and what can be done to fix it.’

‘Someone told me that Kristen Bell’s therapist told her that honesty without tact is cruelty and I wrote it on a Post-It and keep it on my desk,’ another Twitter user shared.

While others spoke about self care: ‘My therapist told me to absorb compliments for 30 seconds to 1 minute, repeating the words, and by doing so, those compliments over time build self worth and armour for when you are attacked/self sabotage. It’s been life changing.’

Some spoke about how their therapists had taught them about self care, while others spoke about confrontation

Another user added: ‘Stop fighting yourself. The cruel person inside of you is an internalization of your abuser, but it’s still you, and not your abuser. You can’t kill him or make him go away, only disarm him with the love and compassion you once needed.’

‘If you don’t acknowledge an emotion you can’t get past it. Even negative ones, like envy,’ another shared.

While others talked about success: ‘Progress isn’t linear. There will be ups and downs no matter how much you plan or how hard you work.

One women also shared her experiences with grief: ‘I went to a therapist after losing a baby who lived only lived 1 day. She explained to me that grieving a child is really just love with no where to go. I will grieve him forever, because I will love him forever. She assured me I would get better at living with grief, and I did