People smuggler, 69, made a fortune smuggling Albanian migrants across the Channel

Jailed Leonard Powell, 69, has been ordered to repay nearly £138,000 of the money he made from illegal people smuggling

A people smuggler who made more than quarter of a million pounds smuggling Albanian migrants across the Channel into Britain in a fleet of high-speed powerboats was today ordered to pay back all £138,000 he has to his name.

Albanians were picked up on a French beach and raced across the Channel to the Kent coast, where they were left to make their own way inland evading British police and border security.

The Powells used a pub car park near their home in Farningham, Kent, to meet with their team of boat skippers and Albanian ‘travel agents’ before each migrant run.

Leonard was jailed for nine years last September after he was convicted of conspiracy to facilitate the commission of a breach of the immigration law of the UK. Other members of the gang were jailed for a combined total of almost 50 years.

Their trial heard they charged as much as £5,500 per person for their illegal people-smuggling services, meaning just the trip which saw them arrested – when their RHIB was rescued with 18 migrants aboard – might have made them as much as £99,000.

The National Crime Agency (NCA) estimates Powell made a ‘criminal benefit’ from the scheme of £268,000, but have sought and won a Proceeds of Crime order for £137,810 – the most they believe Powell now has in realisable assets.

Today at the Old Bailey Judge Mark Dennis QC ordered Leonard to pay back the sum within six months, or face an additional two-year sentence. 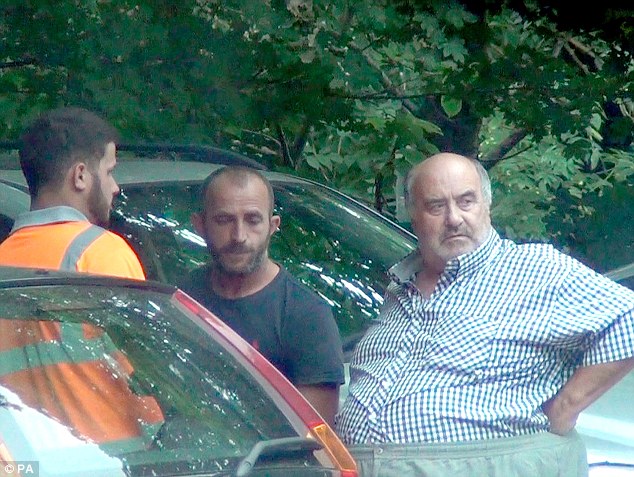 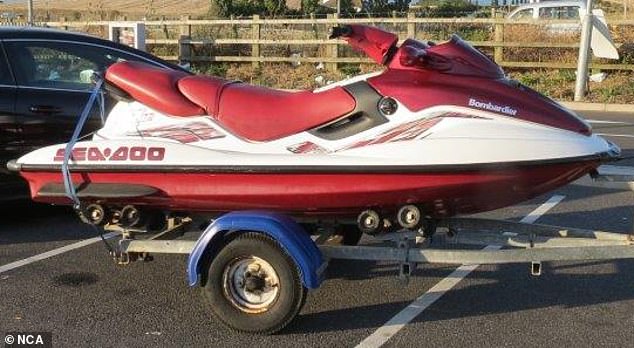 Leonard Powell, Alfie Powell and Bath, along with Albert Letchford, 43, Saba Dulaj, 24, and Arthur Nutaj, 40, were arrested on 14 August 2016 after an NCA investigation.

Leonard’s other son George Powell, 42, had admitted being part of the operation, along with two other smugglers – former Judo champion Robert Stillwell, 35, and 37-year-old Mark Stribling.

Stillwell and Stribling were caught with 18 Albanian migrants on board after running into difficulties off the coast of Kent in the early hours of 29 May 2016.

The Powells had organised the service while Bath and Letchford helped them by towing, storing and crewing their vessels and driving the newly-arrived migrants to their destinations once they arrived.

Albanians Dulaj and Nutaj were the ‘travel agents’, sourcing and communicating with the would-be migrants and liaising with the Powells.

The gang was caught after a trip in choppy waters led them to fear for their lives. 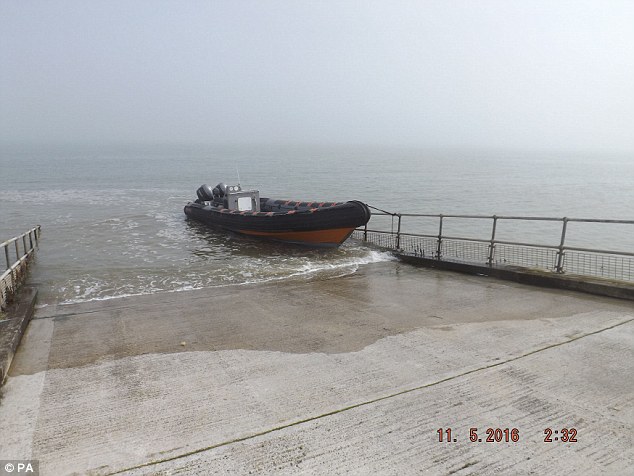 Pictured: The rigid-hulled inflatable boat Rebel which was found abandoned on the beach at Dymchurch with children’s life jackets on board 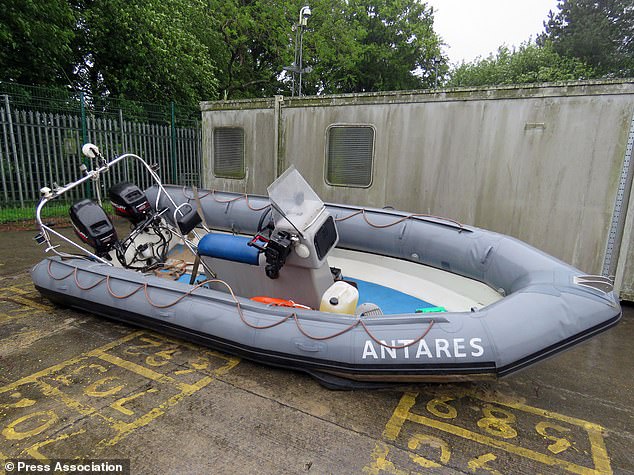 Once ‘Rebel’ had come to the attention of the authorities the smugglers bought a new vessel – a grey RHIB named ‘Antares.’ Pictured: The Antares RHIB which was abandoned by the gang 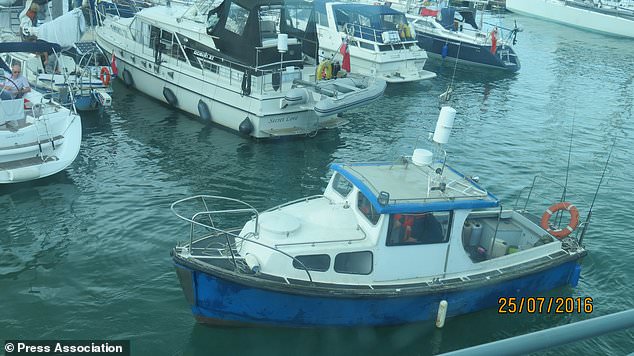 A fourth vessel, ‘The Boat With No Name’ (pictured), was bugged in an operation involving Kent police and the French authorities

On 11 May, the morning after a successful migrant run, their boat ‘Rebel’ a RHIB with twin 100hp engines, was found tied up at Dymchurch beach, unattended at the slipway.

Early that afternoon Bath arrived and told Coastguard officers the boat was his and he had planned to go skate fishing with three friends and have a barbecue in Dungeness, but the poor weather conditions prevented them.

Once ‘Rebel’ had come to the attention of the authorities the smugglers bought a new vessel – a grey RHIB named ‘Antares.’

On 26 May French police on Escalles noticed a boat come into the beach but then back out and speed off without any migrants after a car signalled to it using its headlights.

The smugglers then bought another white RHIB called the ‘White Scanner’ for £12,500, which sailed off from Dymchurch two days later.

Messages from migrants’ phones show that by 11.37pm the Scanner was ‘in real difficulty, its occupants fearing for their lives’, and the Antares went out to meet it.

Mr Probert-Wood said: ‘There was the scene, the White Scanner drifting, 18 migrants on board, 17 men, one woman, the two people who stick out are Stribling and Stillwell.’

A rescue operation was mounted with a HM Border Force boat and helicopter belonging to the Coastguard.

The ‘Antares’ was spotted by the helicopter floating 50-100m from Dymchurch beach, unmanned.

The smugglers Stribling, 35, and Stillwell, 33, were arrested and pleaded guilty to the conspiracy, and of the 18 Albanians on board – 17 men and one woman – none had leave to remain in the UK.

Many of the migrants had been sent information as to the location of the Escalles pick-up point.

The case was referred to the National Crime Agency who launched Operation Sugate to snare the shadowy gang of people smugglers.

NCA Branch Commander Mark McCormack said the main purpose was to protect the migrants and stop gangs with no experience at sea ferrying people across.

A fourth vessel, ‘The Boat With No Name’, was bugged in an operation involving Kent police and the French authorities. 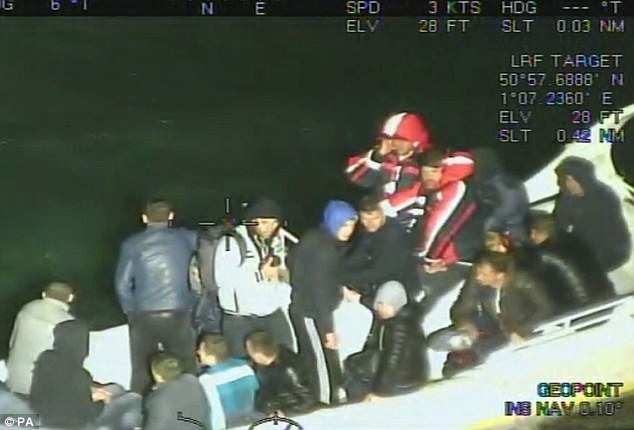 The gang of people smugglers made a fortune smuggling Albanian migrants across the Channel into Britain in a fleet of high-speed powerboats. Pictured: Eighteen migrants aboard the gang”s boat the White Scanner which began to sink off the UK coast

Francis Wade and Albert Letchford had sailed the boat out of Ramsgate but soon ran into difficulty.

Wade had just completed a two day £250 course, designed to help beginners, before setting off to France.

He was secretly recorded saying: ‘It ain’t half choppy out there.

‘It is not my liberty, it is my life I am thinking about – it is that choppy out there.’

He can be heard cursing because he cannot get the GPS system to work while typing in a French postcode which only works on a Sat Nav – ‘We have been out here for half a f****** hour’.

It circled in the busiest shipping lane in the world before swerving into the path of a fishing boat and a cargo vessel.

Nutaj was sentenced to seven and a half years, George Powell, 42, was jailed for six years and nine months, while Stribling and Stilwell were both jailed for more than four years each in 2016.

NCA Branch Commander Mark McCormack, said: ‘Not only are we targeting and prosecuting criminals involved in this type of offending, but we are also determined to strip assets from them to ensure they don’t benefit financially or materially from their crimes.

‘These confiscation orders will help to ensure they forfeit their wealth as well as their liberty. Not paying will keep them behind bars for longer, and the money owed would still hang over their heads.

‘The NCA continues to use all the tools at its disposal to target illicit wealth, wherever we find it.’