Gavin Charters, 40, was stopped at the Channel Tunnel by Border Force officers at the UK check point in the French side

A people smuggler caught trafficking two Vietnamese migrants into the country in the boot of his car in a bid to clear a £9,000 gambling debt has been jailed.

Gavin Charters, 40, was stopped at the Channel Tunnel by Border Force officers at the UK check point in the French side on February last year.

Carrying out a search of his vehicle, they found the Vietnamese man and woman in the boot.

He initially told officers he had been to France to meet a friend and go on a fishing trip. But there was no fishing gear in the car and he wasn’t able to reveal who he had met.

Charters, from Liverpool, was arrested and during further questioning he then cooperated with officers’ inquiries.

He was later charged and bailed but absconded prompting a manhunt.

On September 24, police attended an identified address and Charters attempted to escape on foot but was caught.

Further investigations showed he had gambling debts of around £9,000. Payment for the smuggling trip would have gone some way to clearing the debt. 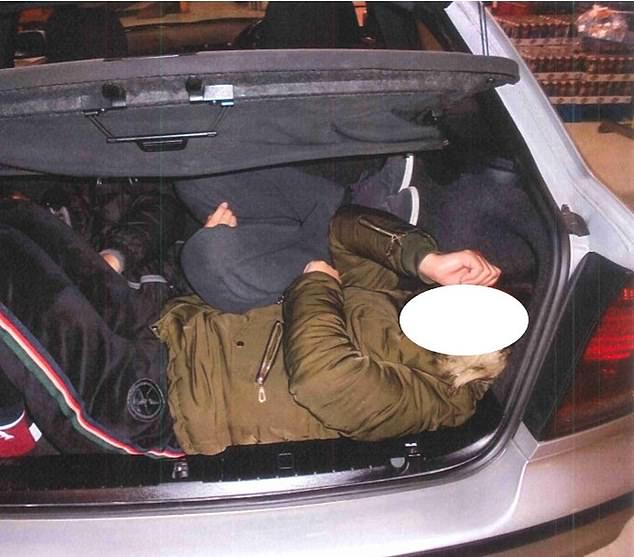 Carrying out a search of his vehicle, they found a Vietnamese man and woman in the boot, leading to him being arrested for people smuggling

Charters appeared at Canterbury Crown Court in Kent on September 25 and pleaded guilty to assisting unlawful entry into the UK. He was jailed for 29 months the same day.

Home Secretary Priti Patel said: ‘This crime was a blatant attempt to smuggle two vulnerable individuals into the United Kingdom with no care for their safety or wellbeing.

‘This sentencing sends out a clear message to anyone involved in organised immigration crime: we will not tolerate it, we will catch you and you will face the full force of the law.’

Stephen Blackwell, Assistant Director for Criminal and Financial Investigations, Immigration Enforcement said: ‘People smuggling is a cruel and exploitative crime. People like Gavin Charters do not care about the wellbeing of those they smuggle, only making a quick profit.

‘Charters knowingly and flagrantly flouted laws set up to protect vulnerable people and the UK public. I’m extremely proud of the team for apprehending Charters and also tracking him down to ensure he faced justice after he absconded.