People who have one mild concussion more at risk of dementia

People who have suffered from head injuries including mild concussion are more at risk of dementia, a major study has found.

Brain injuries – typically caused by a fall, car accident or assault – increase the chances of Alzheimer’s and other forms of dementia by almost a quarter (24 per cent).

The severity of the brain injury, the younger a person is and the more knocks they had, all further increase the chances of being diagnosed with dementia in later life, scientists found.

Even those who had suffered just one mild concussion had a 17 per cent higher risk of developing the condition, they say.

But the US and Danish researchers also stressed that the chances of developing Alzheimer’s after a brain injury was still low.

Lead author Professor Jesse Fann, from the University of Washington’s School of Medicine, said: ‘Individuals with a history of traumatic brain injury, including those with less severe injuries have an increased risk of developing dementia, even decades after the injury.

‘However, it’s important to emphasise that although the relative risk of dementia is increased after traumatic brain injury, the absolute risk increase is low.

‘Our findings do not suggest that everyone who suffers a traumatic brain injury will go on to develop dementia in later life.’

Dementia is now the leading cause of death in the UK with 61,000 new cases a year, and no sign of a cure.

Symptoms vary in severity but typically include memory impairment, confusion, and loss of ability to carry out everyday activities.

Scientists tracked almost three million people in Denmark over a period of 36 years in one of the largest studies of its kind.

Meanwhile 132,093 people had experience at least one, usually mild, brain injury – such as a bump or blow to the head, disrupting the normal function of the brain.

Researchers found more people with dementia (5.3 per cent) than those without the disease (4.7 per cent) had a history of traumatic brain injury.

Risk of dementia also increased with both the number of traumatic brain injuries and also their severity.

Those who had suffered a severe injury had a 35 per cent greater chance of getting dementia than those who had not (0.8 per cent chance compared to 0.1 per cent).

Those who had five or more head injuries were nearly three times more likely to get dementia than someone who never suffered from one, suggesting sportsman like boxers could be at particular risk.

Worryingly, the younger the person was when they suffered from a head injury, the more likely it was that they would suffer from dementia years later.

For example, those who had a brain injury in their 20s were 63 per cent more likely to develop dementia about 30 years later compared to those who didn’t.

The idea that blows to the head suffered by boxers and footballers may increase the risk of dementia is controversial. 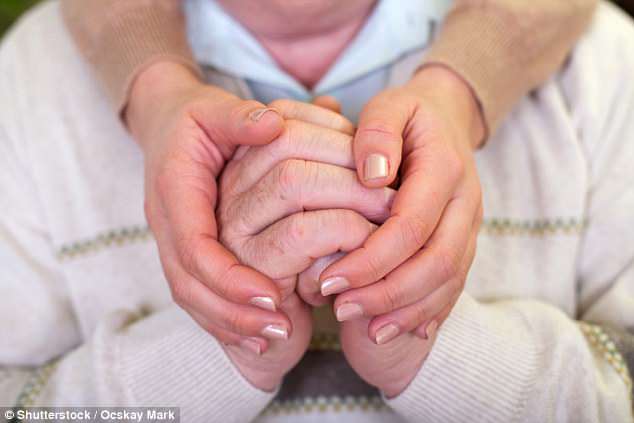 Dementia is now the leading cause of death in the UK with 61,000 new cases a year, and no sign of a cure

Previous research on links between brain injury and dementia has produced conflicting results, said the study authors writing in the journal The Lancet Psychiatry.

In a comment article accompanying the research, Professor Carol Brayne, from Cambridge University, said more should be done to ascertain where and how the injuries were occurring.

‘The association of TBI with different causes and how these change across time needs policy attention, as it is likely that prevention needs to be considered at societal, community and local levels.’

Dr Carol Routledge, Director of Research at Alzheimer’s Research UK, said: ‘This well-conducted study adds significant weight to previous evidence of a link between head injury and an increased risk of dementia.’

The researchers were able to take advantage of comprehensive health records from nearly 3 million people in Denmark to explore dementia risk at a national scale and shed more light on the long-term health effects of head injuries.

‘Over 95 per cent of people who developed dementia in this study hadn’t had a brain injury, so the study does not tell us that traumatic brain injury is a definite cause of dementia,’ he said.

‘It does confirm earlier reports that people who have had brain injuries are at a slightly increased risk of developing the condition, but head injury is still a much smaller contributory factor for developing dementia than smoking, or a sedentary lifestyle – risk factors that are much easier for all of us to do something about.’