Researchers from Texas A&M University said when a park has a complex layout, more people are able to access it in their daily life and reap the benefits of nature.

Green space is already known to be beneficial for health because it provides space for exercise, clean air to breathe and natural surroundings lower stress and internal swelling.

The study, published in the respected medical journal The Lancet Planetary Health, is one of the first to investigate the design of such spaces, rather than just the size.

Green space is known to be healthy because it gives people space to exercise, breathe clean air and natural surroundings are known to reduce stress and inflammation, which is harmful swelling inside the body (stock image) 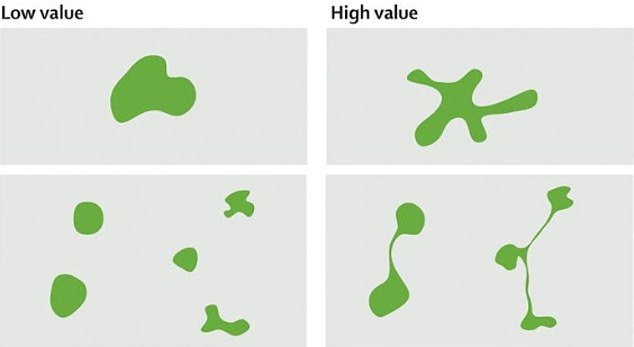 People who live near irregular shaped parks (right) are less likely to die early than those who live near square or simple shaped ones (left), a study suggests

She said: ‘Nearly all studies investigating the effects of natural environments on human health are focused on the amount of a community’s green space.

‘We found that the shape or form of green space has an important role in this association.’

The study, published in The Lancet Planetary Health, analysed data on green space in neighbourhoods of Philadelphia.

Using a computer programme, they quantified the amount of space each neighbourhood had, whether it was well connected or fragmented.

NEARBY PARKS CAN STOP UNHEALTHY CRAVINGS AND MAKE YOU HAPPY

Living somewhere with a view of a park or garden could reduce your cravings for chocolate, cigarettes or alcohol, researchers led by the University of Plymouth found.

Being surrounded by green space was shown to help people have fewer negative feelings and therefore less of a tendency to reach for unhealthy treats.

Another study found that for every increase of one hectare of green space – about the size of an international Rugby Union pitch – close to residents, their life satisfaction increased by eight per cent.

The team at the universities of Newcastle, Warwick and Sheffield claimed they had ‘proven what everyone has always assumed was true’ – that green space is good for wellbeing.

Psychologists believe getting outdoors is the best way to exercise, after finding it relived stress more than working out indoors.

Mountain biking and running in landscapes without any buildings were found to have the biggest positive impact on mental health, and it’s likely to be because of the calming effect of nature, the team at the University of Roehampton said.

They used census data for hundreds of thousands of people from the Department of Public Health of Philadelphia to obtain the mortality rate in each neighbourhood.

They found that residents who lived with more complex-shaped green spaces had a lower mortality risk. Death from heart and lung diseases were lower.

This could be, the researchers claim, because there are more entrances to the park over a large area, raising the likelihood of a person going there every day.

The mortality risk was also lower if various green spaces across a neighbourhood were well connected with green pathways.

This may be because people are able to walk, jog or run through more scenic routes.

No specific shape had the largest impact on mortality. But the data supports the idea that the more complex the park shape, the better, Dr Wang said.

She added: ‘Our results suggest that linking existing parks with greenways or adding new, connected parks might be fiscally accessible strategies for promoting health. 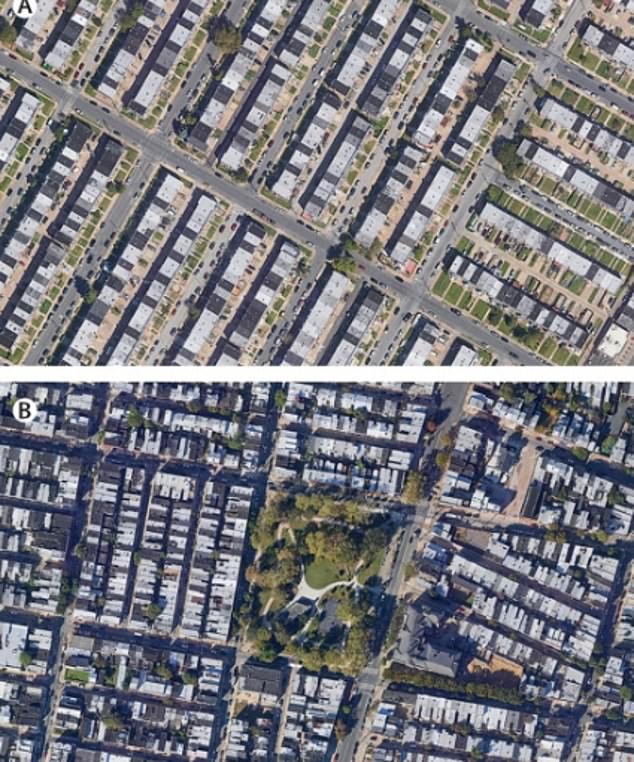 People who lived near ‘complex’ parks which had more access points (B) had a lower risk of death, perhaps because they are more likely to go there every day, researchers said. Even if people were near green spaces, like their garden (A), their mortality risk wasn’t as low

‘We showed that the complexity of the park shape was positively associated with a lower risk of mortality.

‘This association might be attributable to the increased number of access points provided by complex-shaped green spaces.’

It was suggested further studies can investigate the exact reasons behind the link.

But for now, city designers aiming to create healthier living environments could use their findings, the authors said.

The UK Government advises that homes are built within 984ft (300m) of a natural environment, such as a park, for physical health.

Greenspace has been tied to better outcomes when measuring suicide, respiratory, heart and circulatory death.

But studies also show green spaces can have a huge impact on a person’s mental health – even more so than the influence of job or income, researchers from the universities of Newcastle, Warwick and Sheffield found in August.

They said city-dwellers who live within 984ft (300m) of a park or play area are happier after assessing the quality of life of over 25,000 people across London.