People with polarized political views are more likely to be duped by bots and Twitter trolls, according to study

By Michael Thomsen For Dailmail.com

For years, Russia’s Internet Research Agency has attempted to influence American political opinion through a swarm of bot and troll posts on social media.

In 2016, the government-funded troll farm produced 57,000 Twitter posts, 2,400 Facebook posts, and 2,600 Instagram posts, the majority of which were about divisive political subjects such as police brutality and childhood vaccination.

A new study from Duke University attempts to measure the effect of all of these posts on the average American social media user.

‘A rapidly expanding literature examines the breadth and depth of IRA activity on social media to gain insight into Russian social-influence strategies,’ the researchers write, in a paper published in the Proceedings of the National Academy of Sciences.

‘Yet, to our knowledge, no studies have examined whether these efforts actually impacted the attitudes and behaviors of the American public. Our study is an initial attempt to fill this research gap.’

To reach these conclusions, researchers looked at the responses to a 2017 YouGov survey of 1,239 Twitter users, roughly split between Republicans and Democrats.

They found 19 percent of the subjects had been exposed to posts from an IRA account, and 11 percent had directly interacted with one of those posts.

There was no evidence that exposure to strongly expressed views from the opposing party had any effect on altering a Twitter users preexisting beliefs.

According to the researchers, ‘the respondents most likely to interact with trolls were those who may be least susceptible to persuasion effects—because of their more entrenched political views.’

Republicans were more likely than Democrats to interact with an IRA account, but the difference was not statistically significant according to the researchers. 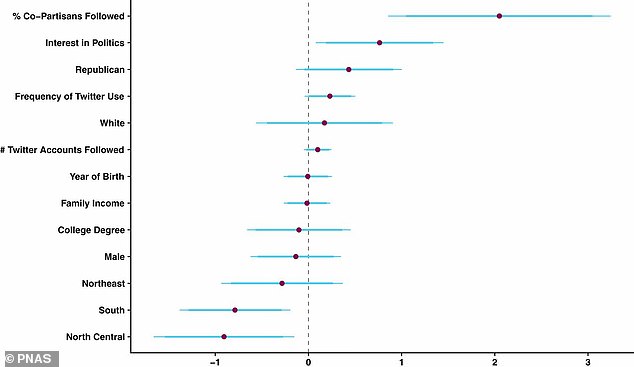 The single biggest factor in whether a person interacted with an IRA troll post was whether it confirmed to a preexisting political bias, which researchers measured by considering the aggregate views of all the other accounts a person followed

Subjects were categorized as having either strong or weak identification with their chosen party, and their accounts were assigned a numeric score reflecting the degree of ideological bias reflected by their Twitter follows.

Researchers also collected data from Twitter about each respondent’s past usage.

The researchers note that the ‘vast majority’ of survey respondents, around 80 percent, had no interaction at all with IRA bots.

For those accounts that did, those interactions accounted for just one tenth of one percent of their overall Twitter activity.

The researchers acknowledge the study’s findings are limited by considering only Republicans and Democrats, ignoring the 45 percent of Americans who identify as neither.

It’s also unclear whether these people might have become less charitable than they already were in their views of people with opposing views.

What’s clear is that people seem to use social media to affirm what they already believe.

‘The Americans are very impressionable people; they see what they want to see,’ Yevegeny V. Prigozhin, one of the IRA’s backers, said in 2018 after he was listed as one of 13 Russians indicted for interference in the 2016 presidential election.

‘I have a lot of respect for them. I am not upset at all that I ended up on this list.’

‘If they want to see the devil, let them see him.’