The researchers believe people with these traits either don’t believe the measures work or don’t care about the effect not adhering to them may have on others.

The studies, which surveyed 1,000 people in Poland, also found psychopathic and narcissistic people were far more likely to hoard essentials during lockdown.

They are more greedy and competitive than others and have an inflated sense of entitlement, the researchers say.

Those with narcissistic personalities tend to be greedy and self-centred, and their lack of empathy means they have no problem exploiting other people.

People with psychopathic tendencies, on the other hand, are more cruel, deceitful and manipulative while coming across superficially charming.

Most, if not all, people demonstrate some of these tendencies from time to time – but the vast majority show remorse or regret their actions.

Around 1 per cent of the UK population show patterns of self-centered, arrogant thinking and behavior, which is diagnosed as narcissistic personality disorder (NPD).

Estimates suggest up to 400,000 people in Britain could be diagnosed as psychopaths.

People with psychopathic and narcissistic personality traits are more likely to ignore coronavirus restrictions like wearing face masks in shops, studies have shown 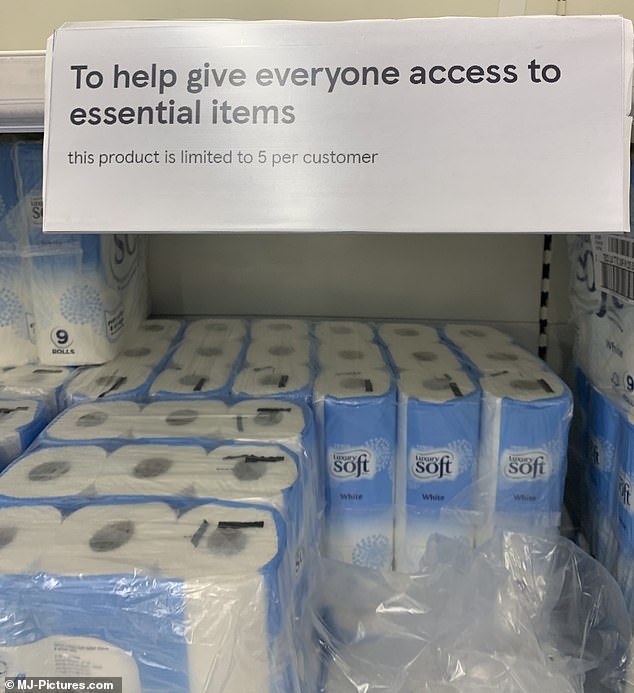 The two new studies, both published in the journal Personality and Individual Differences,  were conducted by researchers from the University of Warsaw and SWPS University of Social Sciences and Humanities is Poznan.

The Warsaw team surveyed 755 people online between March 15 and 29, during the first month of the national lockdown.

Participants were asked dozens of questions about the threat of coronavirus and how likely they were to adhere to rules.

A second wave of coronavirus will cause more suffering than the first if Britons don’t stick to social distancing and wear face masks, according to the UK’s top doctors.

Leading medics believe there will be a deadly resurgence of Covid-19 during the colder months, amid claims the virus will find it easier to survive and spread because people spend more time indoors.

They say this, combined with a seasonal flu outbreak and a huge backlog of patients waiting for treatment due to delays during the coronavirus pandemic, could ‘devastate’ an already-stretched NHS.

Professor Carrie MacEwen, chair of the Academy of Medical Royal Colleges, said medics and healthcare workers were ‘totally reliant on the public understanding that this has certainly not disappeared and could come back and cause even more suffering for the population’.

The warning comes after the Government was accused of sending mixed messages about face coverings and returning to work.

Boris Johnson announced his plans to get the country back to normal by Christmas, with Britons being encouraged to go back to work and almost all amenities reopening by July 25. The PM also revealed plans to get live crowds back at sporting events and concerts in the coming months.

But the announcements were met by an outpouring of criticism by scientists who say the virus is still ‘rife’ and people becoming complacent could fuel a second epidemic.

Dr Alison Pittard, head of the Faculty of Intensive Care Medicine, told the Guardian: ‘People might think Covid-19 is over with, why do I have to wear a face mask. But it isn’t over. We still have Covid-19 patients in intensive care.

‘If the public don’t physically distance and don’t wear face coverings we could very quickly get back to where we were earlier this year.’

Volunteers had to say whether they agreed, strongly agreed or disagreed or strongly disagreed to questions including, ‘The chance that I will get the coronavirus during my lifetime is very high’, ‘I have washed my hands more often’ and ‘I have stockpiled bigger amounts of food’.

Lead author of the research, Dr Bartłomiej Nowak, an economist at SWPS, said his research reinforced the theory that people with so-called ‘Dark Triad’ traits were less likely to comply with Covid-19 measures.

He wrote in the study: ‘Such findings are congruent with details about the fact that people who are high on these traits are more impulsive, focus on self-interest, and tend toward risk-taking.

‘Weaker preventive behavior among those characterized by the Dark Triad traits was partially explained by their health beliefs about the coronavirus, and in particular higher levels of perceived barriers against prevention and lower self-efficacy.

‘Participants higher on the Dark Triad traits seemed to be concerned with negative aspects of prevention and not consider the benefits of it.’

Co-author Zemojtel-Piotrowska, an associate professor at the university, admitted the study was limited because Poland has largely managed to avert a major crises.

The European nation of 38million people has suffered just 1,642 deaths – which may mean the perceived threat of the virus is not as high among citizens.

She told PsyPost: ‘Our study was conducted in one culture – in an affluent, stable European society, not seriously affected by the coronavirus.

‘We do not know why exactly people with dark personalities tend to buy more supplies – because they are more greedy or they are more competitive than others or they more take care about their personal comfort due to their feelings of entitlement.’

The second study, by the University of Warsaw, surveyed 263 people in Poland through online surveys between April 14 and April 30, at the height of the crisis in Europe.

It also found that compliance with guidelines was low among people who had narcissistic or psychopathic tendencies.

These people viewed the restrictions as the Government forcing its will upon them, which they do not like due to their sense of entitlement, the researchers found.

Those who were more compassionate and empathetic viewed them as ‘a sense of moral obligation to protect fellow countrymen’.

Narcissists also did not perceive the virus as a danger to their health, so they saw no reason to comply with the rules.

Whereas people who were quite nervous or anxious in nature viewed the panedmic as a threat, which translated into compliance, they wrote in the study.

The researchers also found that people who scored higher on measures of narcissism or psychopathy were more likely to view the Covid-19 situation as positive in nature, possibly because they viewed the circumstances as ripe for exploitation.

Experts in the UK are growing concerned that there could be a ‘lockdown rebellion’ in some areas of England if local lockdowns need to keep being brought back in.

The UK Government’s current strategy is to avoid a national lockdown at all costs and instead put tough restrictions on areas that experience spikes in infections.

Leicester was the first area in England to roll back the measures on June 29, just weeks after they were eased for the rest of the country.