‘Our reaction has been outstanding’: Pep Guardiola overwhelmed by Manchester City’s response to adversity

Pep Guardiola is ‘overwhelmed’ by Manchester City’s response to recent adversity and claimed no team will eclipse their league consistency over the last two seasons.

City are now two victories away from becoming the first team in a decade to retain a Premier League title after Sunday’s battling win at Burnley.

Guardiola has been left astounded by the character of his team after the demoralising away goals Champions League defeat by Tottenham. Sergio Aguero had been reduced to tears inside the dressing room that night.

‘Our reaction to Tottenham has been outstanding. Overwhelming,’ Guardiola said. ‘How they mentally deal with it, how they react without Kevin, Fernandinho and important players.

‘Then come here and play the way we play. Let’s keep going. Just two games. It’s tough for Liverpool and it’s tough for us, with 92 points and still not champions.

‘We have 192 points over two seasons. Maybe one team in the history will make 100 points in a season but then to make 92 or 98 the next year, I bet that is not going to happen often.

‘I’m delighted with the difference we have over the third, fourth, fifth positions. We have more than 20 points extra than United and Arsenal. It is incredible. 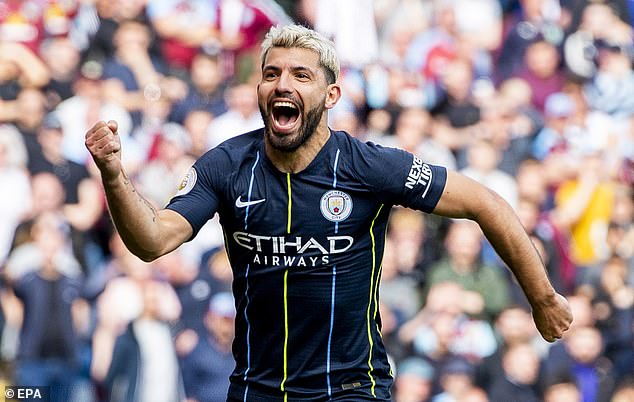 ‘To still be there now – I couldn’t expect that earlier in the season, especially in the winter. We have won 12 games in a row, we’ve won 19 of the last 20. It’s massive, incredible.’

Goal-line technology ruled Aguero’s strike won this against a defensively strong Burnley side, meaning he became only the second player ever to score 20 Premier League goals in five straight seasons.

Guardiola labelled the Argentine ‘a legend’ after an afternoon during which he felt City struggled with the Turf Moor pitch.

‘The pitch was so dry and the ball had problems to move, the grass was high, of course it was an idea from them,’ he added.

‘But when the opponents come to Etihad we do the stadium like we want. Then away they do it the way they like. That’s why I like the Premier League. You get all the playing conditions. That’s why it is the nicest one, the most important. 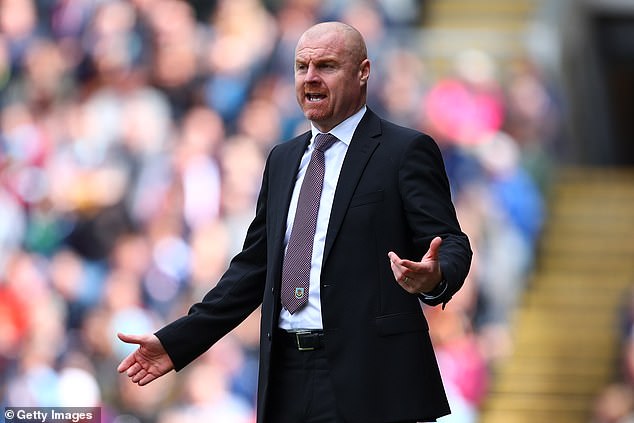 ‘Here you concede a lot of fouls, a lot of corners especially and we cannot survive. I am delighted to arrive at the most typical English stadium, for the way they play and not concede one corner.

‘That shows how well Mikel (Arteta) and Rodolfo (Borrell) prepared for the set pieces yesterday and we could control the situations.’

Sean Dyche believes he can take great heart from the manner of City’s victory, with the champions ending up with six defenders on the pitch.

‘I heard Pep screaming ‘get it in the corner’. It’s a compliment,’ Dyche said.

‘Even the best sides have to do it and today was one of those times.

I thought it was refreshing to hear a top manager scream that to his players. I think it is sign of him wanting to win.

‘You have to do what he wants to do to win. There were a few moments in the second half where you saw the game slowing down. I have got no problem with it. They are a top side but they still have to do the details.’