Pep Guardiola considered organising a warm-weather training camp for Manchester City next month before deciding to give his stars time off instead.

City’s squad are being afforded four days to jet away on holiday in the hope of recharging batteries ahead of the Champions League return against Real Madrid.

Guardiola took City to Abu Dhabi two years ago and, given February’s new winter break, was expected to do similar this term.

The Catalan opted against that, however, with huge fixtures at Leicester City and Madrid immediately after. His players will train at the City Football Academy rather than in warmer climes.

‘We’ll have a few days off and after that we’ll train again, three or four days and then plan for Madrid,’ Guardiola said.

‘We’ll train here. I thought about it (warm-weather training) but I want the guys to stay with their families and then come back. I’ve decided we’ll be here.’

The City manager claimed this week that English football should look at eliminating a cup competition, specifically the Carabao Cup. 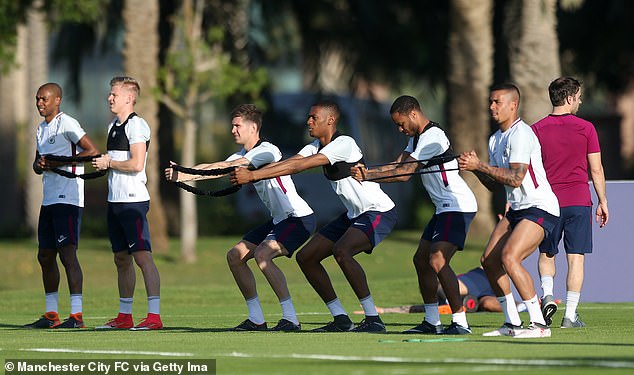 Guardiola was expected to hold warm-weather training, having gone to Abu Dhabi in 2018

The Premier League champions face Fulham in the FA Cup fourth round on Saturday and Guardiola suggested scrapping replays may ease the burden on players in future.

Those comments echo Jurgen Klopp’s beliefs, although Sportsmail reported on Thursday that the FA have no intention of abolishing early-round replays.

‘You maintain the traditions in this country, not just in sport and that’s top, I admire it,’ Guardiola added.

‘The Carabao and FA Cup will be played, maybe we cancel replays, maybe less teams in the Premier League or Championship. It’s not my business, my business is to prepare my team. 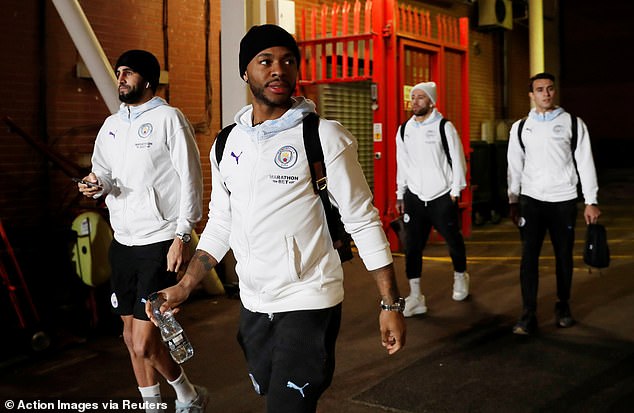 ‘For me it’s not normal to play so often, the same injuries after European cups, we are going to play again and again and it will happen.’

Liverpool are 16 points ahead of City in the Premier League and Guardiola admitted that they could break their record points haul.

‘It can happen, the records are there to be broken, we broke it when someone thought it couldn’t be broken,’ he said. ‘Sooner or later it will happen, history speaks about that. I’s not easy to beat them at the moment, they’ve found a way to win games.’

Meanwhile, Guardiola also reiterated that Aymeric Laporte cannot fix City’s defensive issues on his own after making a long-awaited return from a knee injury at Sheffield United on Tuesday.

‘He played well, he’s not going to solve all the problems we have, but he’s one more player we have and we believe we can use him,’ Guardiola said.