I bought my partner the Rough Guide to Menorca for her birthday in July 2018 and wrote on the inside – ‘let’s plan our 2019 trip to Menorca, happy birthday!’

She booked the accommodation for said 2019 trip one year later literally 30 minutes before we had to catch a train for our flight to the island’s capital, Mahon, from Gatwick.

This may seem like a reckless approach to holidaying and a waste of a 12-month planning window, but it was never her intention to book at the 11th hour and 59th minute.

Capital location: Ted flew to Mahon (pictured), which has an enormous natural harbour

You see, she was convinced she’d booked it in May.

She was apparently told she had until the end of the month to cancel it and had even supplied my credit card details to secure the deposit.

My worries about a lack of activity on my credit card account – such as a ‘pending transaction’ – vis a vis our chosen lodgings were dismissed.

‘They’re really chilled in Menorca,’ she said. ‘They probably don’t bother actually processing anything on credit cards for deposits.’

What about a confirmation email?

‘Oh yes, I’ve been sent one. I think. It’ll be fine anyway, because I saw the booking.’

Well, that’s ok then, if you’d seen the booking, my love. That’s all we need. 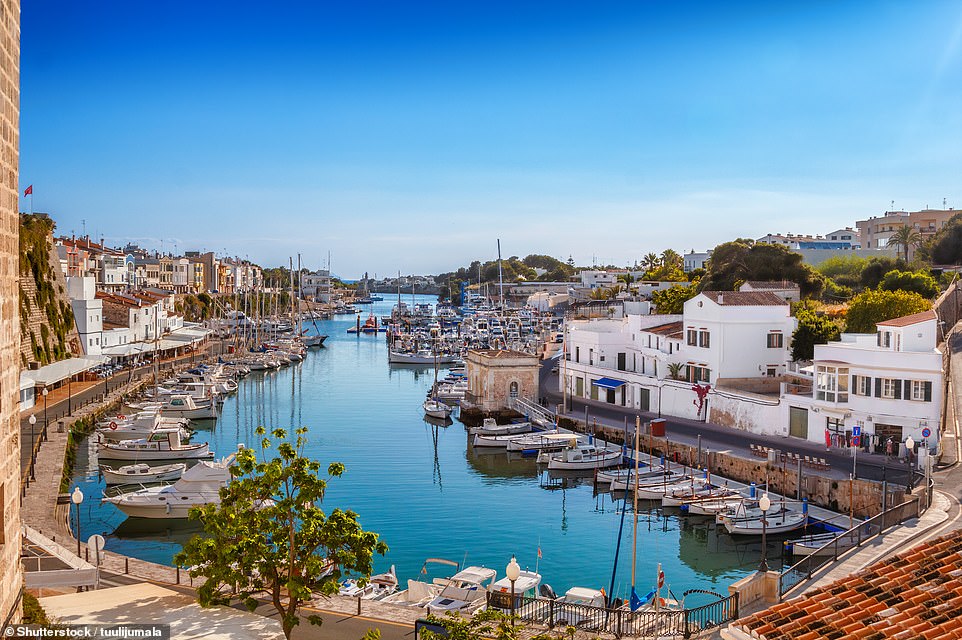 On the day of the flight it was agreed that we should probably find some sort of email confirmation.

Panic set in. Such a missive was conspicuous by its absence.

So a call was made to our lodgings to check if we were booked.

Well, my girlfriend was right about one thing. They are very relaxed in Menorca.

They had no record of our booking, but that wasn’t a problem. An apartment was free and the lack of deposit didn’t matter.

Talk about being smiled upon by the God of Good Fortune, because our accommodation, in the north-west corner of this most enticing of islands, in the middle of a load of fields, was simply wonderful.

Called Agroturisme Biniatram, it comprises an old farmhouse with seven apartments and eight guest rooms, a tennis court, and a most inviting outdoor swimming pool set amid a nicely landscaped garden. 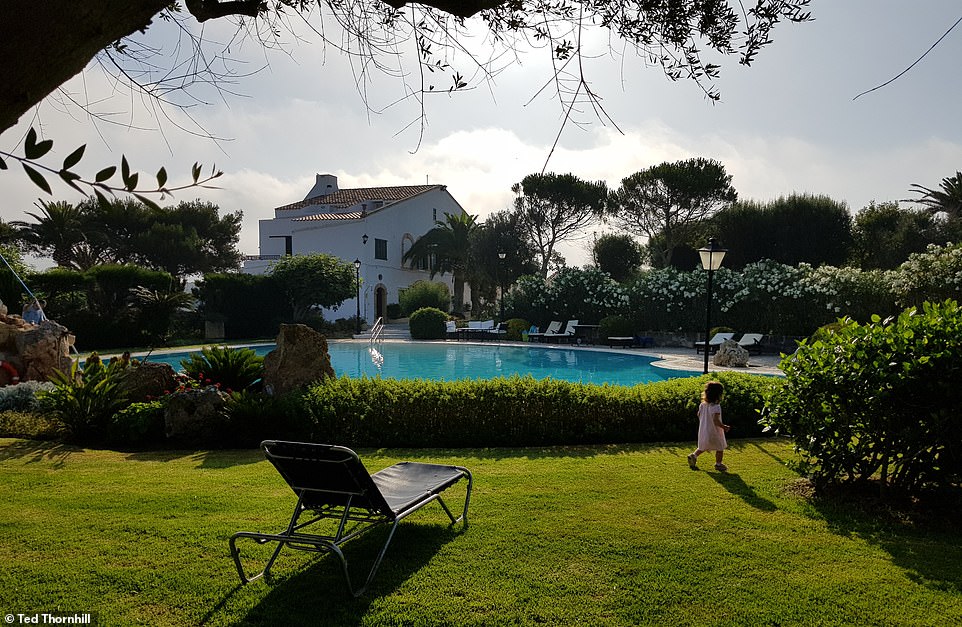 Ted stayed at Agroturisme Biniatram, an old farmhouse with seven apartments and eight guest rooms and a rather inviting swimming pool (pictured)

The pool has a gently sloping shallow end that our 23-month-old loved splashing around in.

Our apartment had a double bed, en-suite bathroom, a small living-room/kitchen area and a terrace that – once we’d dowsed ourselves in anti-mosquito spray (be warned, they will give you a good working over if you don’t lay down defences) – was a great place for rosé-sipping and star-gazing.

There is so little light pollution at Biniatram that we gazed upwards at veritable clouds of stars.

Heavenly. As was life in general there.

Rustic charm is in-built, because the B&B lodge is part of a working farm. Chickens wander hither and thither, cows moo in the near-distance and a resident donkey will occasionally peek over its field wall to observe the day’s comings and goings.

The PVC doors and windows detract a little from the countryside vibe – it’s not quite Withnail and I in the Balearics – but it’s a far cry from Hotel Chainsville.

We paid 1,566 euros for eight nights, with the price including a few very good buffet breakfasts – croissants, fruit, cheese, meat and endless coffee were on offer – and two beach towels.

We thought it was great value, especially given its proximity to some world-class beaches and the mesmerising, medieval, Assassins Creed-esque town of Cituadella.

The nearest beach is Cala Algaiarens, which is an hour’s walk from Biniatram, or 10 minutes by car via some very narrow roads.

The nearest beach to Agroturisme Biniatram is this one – Cala Algaiarens. Be warned – there isn’t much shade. But it is a  beautiful bay

The seabed is a tad rocky here in places but it’s a gorgeous bay. I recommend going at 4pm when the hills on the west side provide a slab of shade.

To the south is Son Saura beach, where we encountered the grumpiest car park attendant in the Mediterranean.

The beach and sea are lovely, though, but there’s very little shade.

There’s plenty to be had, however, if you walk for 15 minutes along the coast to Playa des Talaier. 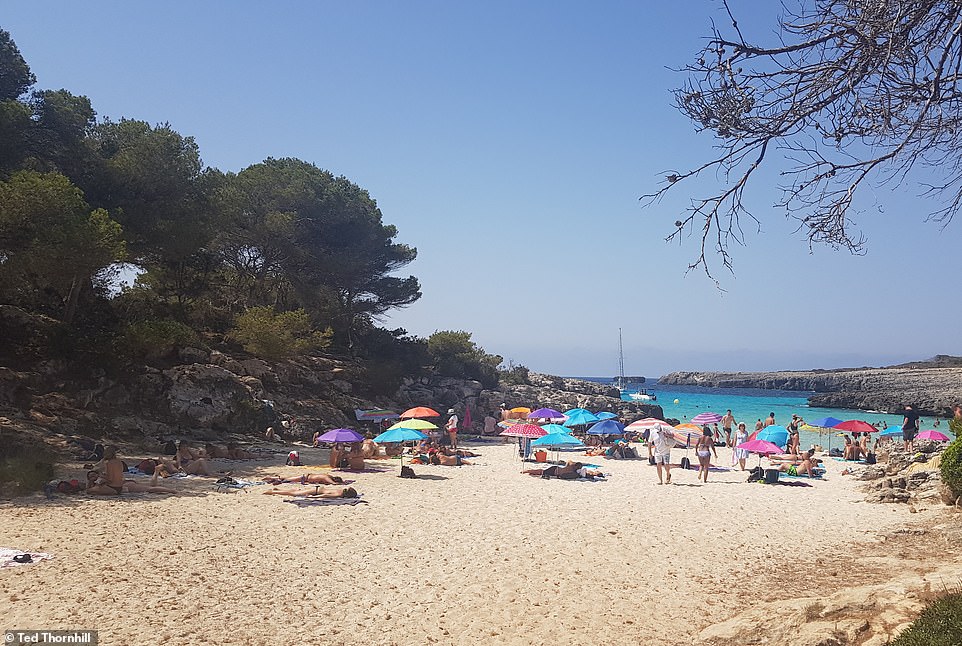 Playa des Talaier is a perfectly formed beach south of Cituadella, with plenty of shade, as this picture shows

This is a little beauty, a perfectly formed horse-shoe-shaped number with a soft-sand seabed and protection from the sun thanks to the surrounding undulating landscape and trees that cast chunky shadows.

Further along still is the much-hyped Cala en Turqueta, but if you’re driving, you’ll need to be up at the crack of dawn.

The car park was full every time we attempted a visit. One morning we turned up at 8.15am – but that still wasn’t early enough.

Once we’d had our fill of the beach, Cituadella proved to be a great place to dry out, and eat out.

Cala en Turqueta is much-hyped. If you’re driving and want to park there, you’ll need to arrive by 8am in the summer 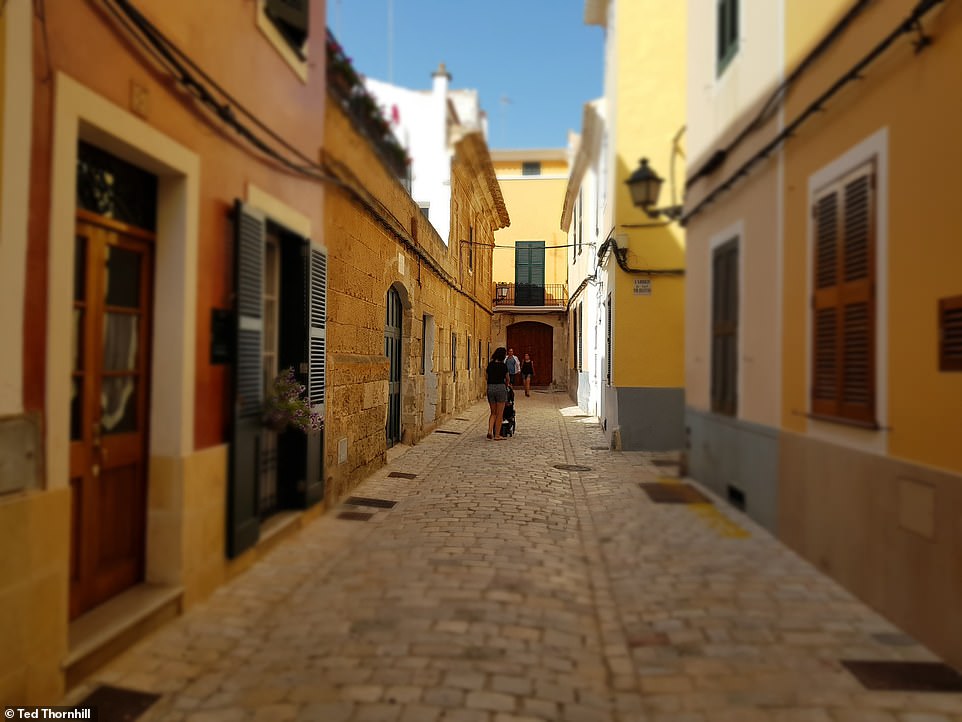 Cituadella proved to be a great place to dry out, and eat out. Plus, just wandering its lanes is a joy 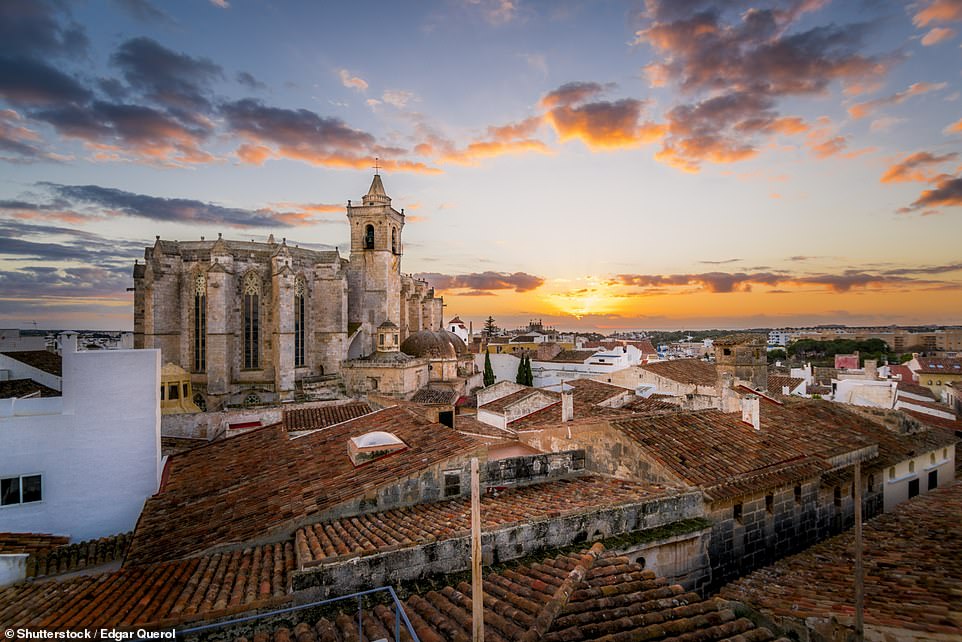 Great places to eat in Cituadella include bar Ulisses and Cafe Balear. Pictured is the town’s amazing Gothic cathedral

We loved bar Ulisses at Placa de la IIibertat, which specialises in top wine and top tapas. I recommend the Twenty Twelve 2016 rosé (four euros a glass), the La Calma 2013 Chenin Blanc (7.40 euros a glass), the Iberian ham and the farmhouse bread with tomatoes.

Café Balear at the back of the harbour was also a winner.

Go for the fish stew and a bottle of Louro white. And don’t worry if there’s a queue – it goes down fast and you can buy liquor at the bar to tide you over.

We also found a great place to eat in Mahon – Santa Rita, after we’d gazed at the enormous natural harbour for a few minutes. 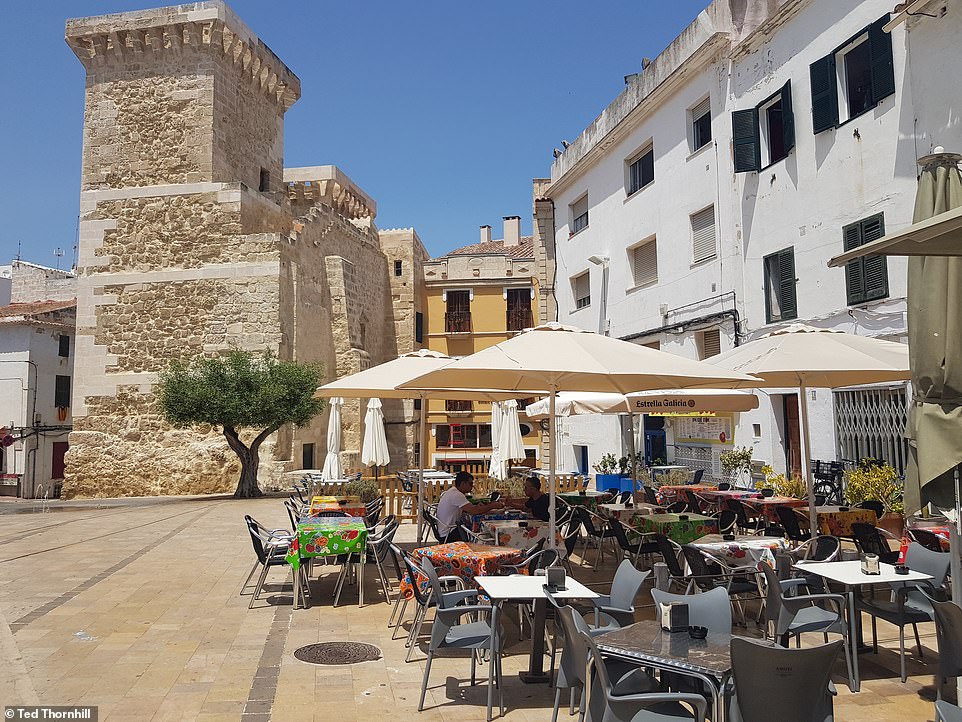 Santa Rita restaurant in Mahon looks a tad drab, but it serves great food and has a decent wine list. Highly recommended 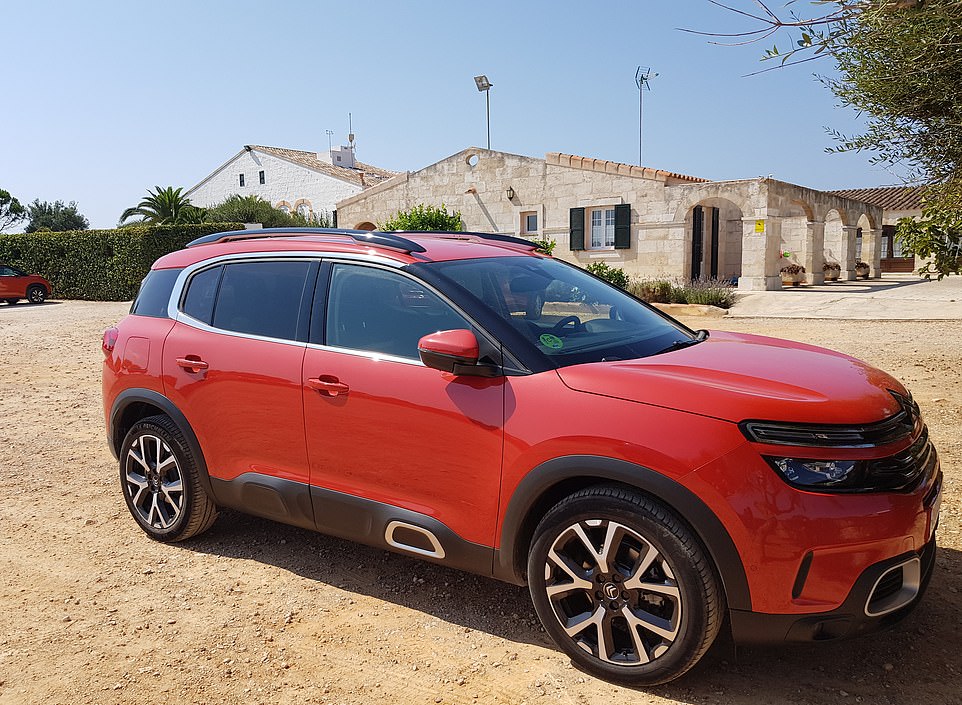 Ted’s rentalcars.com hire car, a Citroen Aircross (pictured at Agroturisme Biniatram) that was perfect for ferrying prams, big suitcases and toddlers around 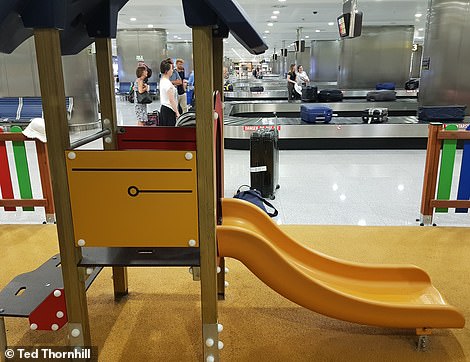 The children’s play area by the Mahon Airport luggage carousel

It looks a bit drab and ordinary, but once inside we noticed the proper stemware (Chef&Sommelier) for the wine and sensed the good times were about to roll (well, they sort of rolled, in between my daughter throwing rice everywhere).

On top of the beaches, tapas and wine we also squeezed in a smattering of ancient thoroughfare exploration in Cituadella and Mahon and a visit to Cova d’en Xoroi – amazing Cliffside caves about 20 minutes by car from the capital that the Menorcans have almost managed to ruin by installing a tacky drinking den with disco lights inside.

A rare misstep from the locals, because on the whole they manage the island – a Unesco biosphere reserve – superbly.

Eye-sore building developments are few and far between, the roads are excellent and, as a cherry on the cake, you get a warm welcome everywhere you go (apart from the aforementioned car park).

And they really love children, it’s clear – there’s even a playground by the baggage carousel at the airport – so if you’re looking for a family-friendly destination in the sun, put Menorca at the top of your list.

Just don’t follow our lead and book it on the day.

Ted flew to Menorca as a guest of easyJet.

EasyJet flies to Menorca from Bristol, London Gatwick, London Luton, London Southend and London Stansted with prices starting from £36.99 per person (one way, including taxes and based on two people on the same booking). All flights can be booked at www.easyjet.com.

The current lead-in price for a week’s car hire in Mahon is £65.10 via www.rentalcars.com.