Nearly every state in America is recording ‘very high’ levels of flu as the US is slammed by a lockdown-fueled resurgence of respiratory viruses this fall.

The Centers for Disease Control and Prevention (CDC) reports 9million flu infections and 4,500 deaths caused by the virus this flu season –  with the worst expected to arrive in the coming weeks. Typical flu season runs from October to May each year.

Dr Sandra Fryhofer, a trustee at the American Medical Association, said during a CDC briefing Monday ‘It’s a perfect storm for a terrible holiday season,

Experts have blamed the deadly flu outbreak on lockdowns, mask mandates, social distancing orders during the Covid pandemic, which left the US population ‘immune naïve’ as they were robbed of vital exposure to healthy germs.

The surge has overrun hospitals, and led to a shortage of key flu medications as a result.

A total of 44 US states are recording ‘very high’ levels of flu transmission, according to the CDC, with 11 of those states recording the highest classification (purple) 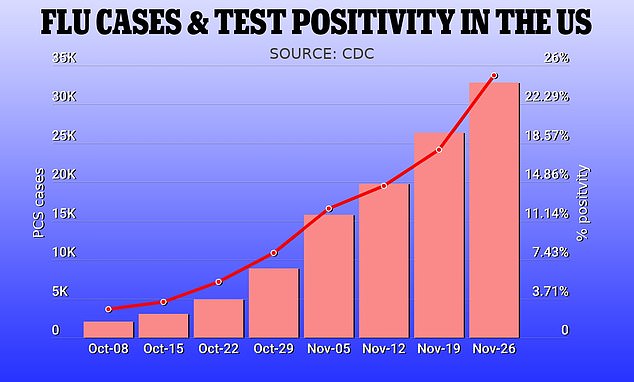 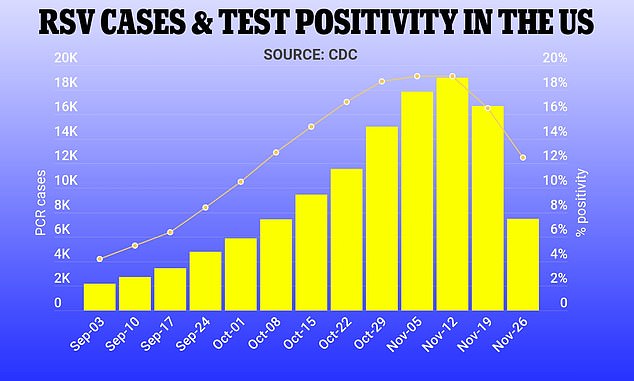 The CDC reports 14 pediatric deaths from the flu so far this year. Usually, nearly 200 children die from the virus each season.

In its most recent data update over the weekend, the CDC listed 44 states as having ‘very high’ levels of flu transmission.

The CDC determines each state’s classification by combining infection figures, positive test rate and hospitalizations related to the flu.

Among that groups of 44, 11 states are considered to have the highest level of flu circulation – standing out even among the others.

Nationwide, 32,733 flu cases were confirmed by health officials during the week that ended November 26 and 25 percent of swabs returned positive.

Experts have described this year’s flu season as the worst since the Swine Flu pandemic in 2009.

Influenza is not the only virus circulating. Respiratory syncytial virus (RSV) is continuing its spread around the US, but has slowed in recent weeks.

The virus is an annual bug that comes back around each flu season. It is usually overlooked as it is not particularly dangerous to adults – but young children are vulnerable.

It kills around 300 to 500 children each year, according to official data.

Covid hospitalizations are starting to rise once again in the US, as the post-Thanksgiving surge begins to slam the nation.

America is recording 35,614 patients in the hospital with Covid each day, a 28 percent increase over the past two weeks.

Not all of these patients are hospitalized because of Covid symptoms, and some may be suffering from another condition while positive for the virus.

Still, officials worry that this could be the first sign of a winter Covid surge.

Covid cases, hospitalizations and deaths will often rise in the weeks following a major holiday, as large family and friend gatherings allow for the virus to quickly spread.

The threat of the virus in 2022 is lower than the two years previous, with cases in early December only half of figures from years previous.

At the start of flu season, the states being slammed the hardest by the virus were concentrated in the US south.

In a promising sign this outbreak will soon peak, states like Alabama and Georgia have seen levels drop, even though they’re still recording ‘very high’ flu circulation.

Official case figures are also significant undercounts because most people infected with common respiratory illnesses will weather them at home instead of seeking medical attention.

Dr Fryhofer warned that these figures could increase even further in the coming weeks as Americans gather with family for the holiday season.

Cases of RSV began to surge early this flu season, erupting in parts of the country in late summer and early fall.

The recent uptick in cases led to many children’s hospitals around America reaching full capacity as they had trouble handling the virus.

There is hope that RSV is already running out of steam, though.

Test positivity is also falling. During the week that ended on November 26, only 12.5 percent of PCR tests for RSV were positive.

A week earlier, the share was 16.5 percent, which was also a drop from the peak of 19.1 percent recorded during the week that ended November 12.

Dr Rochelle Walensky, director of the CDC, also added Monday that parts of the country were either seeing RSV decline or start to taper off after a rough start to the season.

Covid itself still remains a threat as well – though not as much as during the two previous winters.

The US is recording 51,995 daily cases. While this is a 30 percent increase over the past two weeks, it is dwarfed by the over 100,000 daily infections suffered by Americans this time last year.

Covid deaths have steadied as well, with America recording 250 per day.