The personal belongings of an 18-year-old World War One soldier killed in the Somme have been discovered 90 years later.

Private Ted Ambrose, the eldest of six children, was gravely wounded in the head, arm and leg in an artillery bombardment after he went over the top on 7 July 1916.

He was rushed to a hospital in Etaples, 40 miles from Calais, for urgent treatment. His mother wrote to ask to visit him, but the hospital denied permission. Their response is time stamped one hour after Private Ambrose’s death.

The hospital placed his belongings in a brown leather suitcase, which included cigarettes and a picture of his girlfriend Gladys, and sent them back to Hertfordshire.

Heartbroken, his mother hid the suitcase in the loft, unable to look at it. The ‘time capsule’ has just been re-discovered by his great nephew.

The heart-rending story was revealed by historian Dan Hill ahead of the publication of his book, Hertfordshire Soldiers of the Great War. 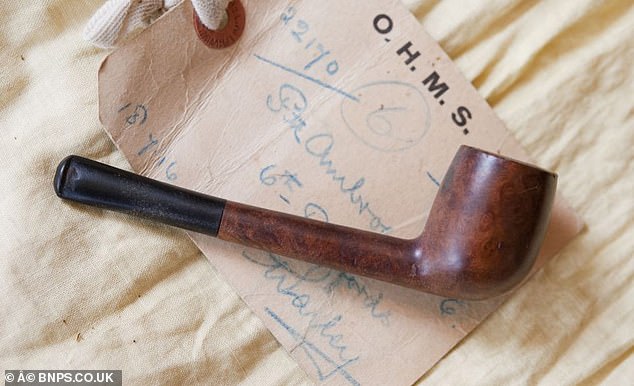 The brown leather suitcase contained his old pipe, which still had tobacco inside 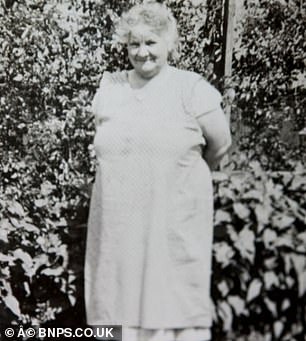 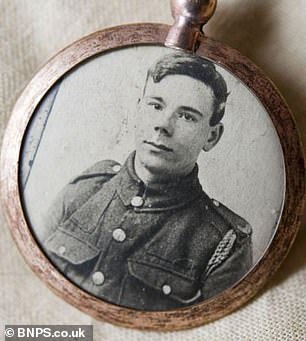 It also had a picture of his grieving mother Sarah. Private Ambrose is pictured above. He died after sustaining wounds on the frontlines in 1916

The suitcase, which had remained sealed for decades, contained the soldier’s most prized possessions including a letter from his father Samuel, a farm bailiff, wishing him luck, his pipe with burnt tobacco still inside and a photo of his mother.

The medals he never wore were also in there, put inside by his mother when he received them posthumously in 1916.

A brooch and letter from Gladys, unused cigarettes and a French language guide for the Expeditionary force were also found inside along with fragments of the shell that inflicted his fatal wounds.

Private Ambrose had come to the frontline with the 6th Bedfordshire regiment following nine months of training.

Once there, his eardrums were perforated after a shell exploded nearby. He was moved to hospital and, just before his return, contracted German measles leading to a longer hospital stay before returning to the front on July 1.

On the day he was hit in the massive bombardment, 100 men in his regiment were killed or injured.

His body was buried the day after his mother wrote to see him, at a cemetery outside the Etaples hospital. 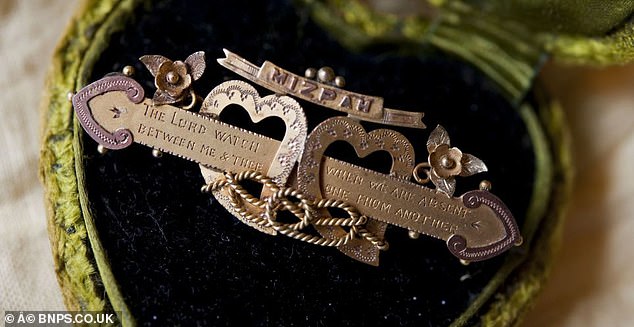 The case also contained a brooch from his girlfriend Gladys. He died in Etaples after sustaining injuries to his head, leg and arm during an artillery bombardment in the Somme 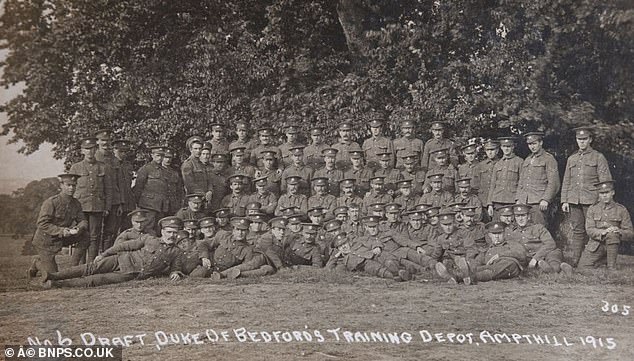 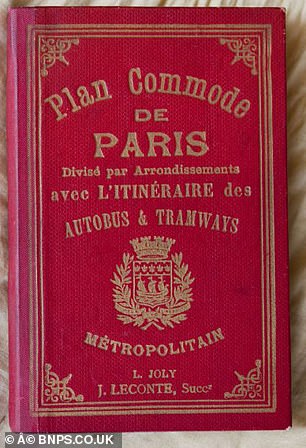 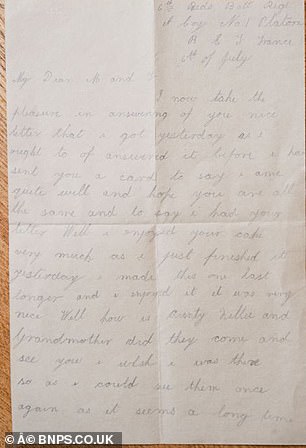 The case of possessions was inherited by his sister Margaret and then passed on to her sons John and David. The family decided to open it in 2014 after seeing an appeal by the Herts at War project to make an exhibition marking the 100th anniversary of the conflict.

John from Letchworth, Hertfordshire, said: ‘It was only when we opened the case that we realised the extent of the archive. It is very moving, especially the letters.’

Revealing the story, Mr Hill said: ‘Ted was not a famous soldier. He did not perform some uncommon act of gallantry which is remembered today.

‘He was an ordinary lad from a sleepy village in Hertfordshire who simply did his duty. Whenever I go to France and pass by Etaples, I always remember to stop and say hello.’