With millions of Australians across the country currently stuck at home due to Covid-19 restrictions, a personal trainer has revealed the most common mistakes to avoid making while exercising at home.

Ben Lucas, director of Flow Athletic, told Daily Mail Australia the major mistakes a lot of people make often include not having an exercise plan before working out and not using correct form, which may lead to injuries.

It’s also vital to warm up beforehand, cool down after and push yourself during each session to make the most of your workout.

Ben Lucas, director of Flow Athletic, told Daily Mail Australia the major mistakes a lot of people make include not having an exercise plan before working out and not using correct form, which may lead to injuries

Mistake 1: Not having a plan

Perhaps the most frequent mistake made when exercising out at home is not planning out your workout and considering core movements.

This would likely occur among people who attend gym classes or rely on a personal trainer to guide them through a workout.

‘You will probably spend more time resting than you should too which will hinder your results.’

To avoid this, Ben said it’s important to find a workout that’s pre-written or pre-recorded to give you the best chance of achieving your results and keeping fit while the gyms are shut.

For instance, Ben said Flow Athletic TV has a range of options to choose from including yoga, strength, HIIT, Pilates, barre and spin. 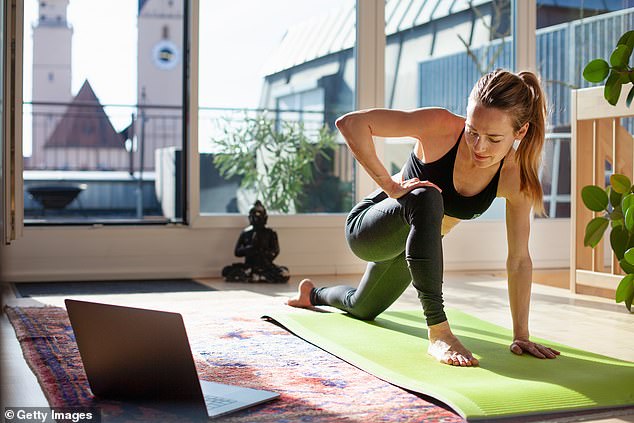 Mistake 2: Not factoring in your warm up and cool down time

Ben said one common mistake people make when exercising at home is not factoring in time to warm up beforehand and cool down after working out.

This is most easy to forget or avoid if you rely on a personal trainer when going to the gym.

‘Stretching and mobility is so important, don’t let it slip just because your trainer isn’t there to tell you what to do,’ Ben said.

‘In fact, if you are working from home from your kitchen table right now, it is probably even more important for the health of your back, neck, hips, shoulders and other parts of your body.’

Instead make sure you include ten minutes before and after your workout to warm up and cool down.

Loop bands: An amazing piece of equipment but make sure you don’t put it around your actual joints – such as your knee caps

Carrying weights when jumping: Be very careful of doing jumping exercises when lifting a weight

You may be surprised by how tough it will be on you spine, hips and other joints when you land

The best aspect of in-person workouts is the fact that someone can correct your form, but when at home you are only able to rely on yourself.

Ben said the best way to avoid incorrect form is to be aware of your fitness abilities and if a particular exercise is too advanced, revert to the most basic version.

‘If you are not familiar with certain exercises, make sure you find a program with an instructor who is explaining how to do the exercises,’ he said.

‘Luckily we often get more out of the basic exercises anyway, such as a normal push up compared to a walking push up.’ 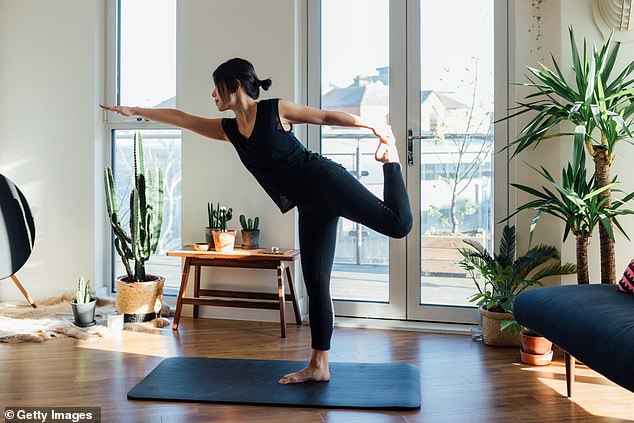 The best aspect of in-person workouts is the fact that someone can correct your form, but when at home you are only able to rely on yourself

Mistake 4: Not pushing yourself

While not pushing yourself harder through a workout isn’t necessarily a mistake, it has a tendency to happen more often when working out alone at home.

‘It is easy to lose motivation half way through a workout when you have things around the house to distract you,’ Ben said.

He suggested to try and pay attention entirely on the workout and the body parts you are moving.

‘It’s a good lesson in focus to ignore the things around you that can easily take your attention,’ he said.