At the age of 18 Abby Williams weighed 98kg consequently from eating fast food every day and never exercising.

Abby, from Sydney, worked at McDonald’s for seven years throughout high school and ate the ‘convenient’ fast food for breakfast and lunch.

The now 23-year-old told FEMAIL she managed to drop an astonishing 40kg in just 18 months.

Today she works as a personal trainer who ‘relates’ to her clients and believes losing weight is a lifestyle change, not simply ‘a number on a scale or dress size’.

Abby Williams (pictured), from Sydney, revealed how she lost a staggering 44kg in 18 months 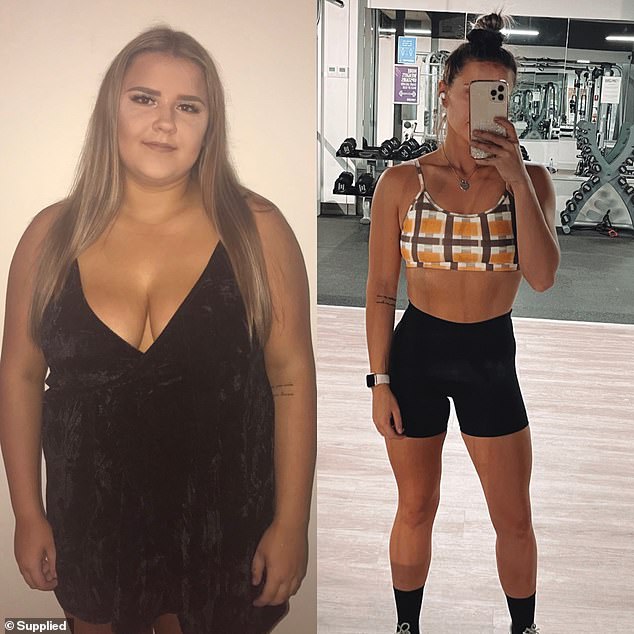 When she was 18 and working at McDonald’s, Abby would eat fast food every day and never exercise

‘In Year 12 I was the biggest I have ever been – I overate, I didn’t consume anything nutritious and would binge eat packets of sweets at a time,’ she recalled.

In 2017 Her diet consisted mostly of sugary foods and saturated fats, including pizza, pasta, burgers and lots of chocolate.

Abby said working at McDonald’s definitely influenced her weight gain because of the convenience – and she also received a staff discount on the already cheap food.

She developed an ‘unhealthy relationship with food’ but never received any negative comments from guys about her weight, though admitted boys avoided her on nights out.

‘My friends would wear amazing outfits while I never did, and I didn’t even consider wearing a bikini to the beach,’ she said.

‘I realised I wanted to do all those things and feel comfortable in my body, so one day I just decided to start.’ 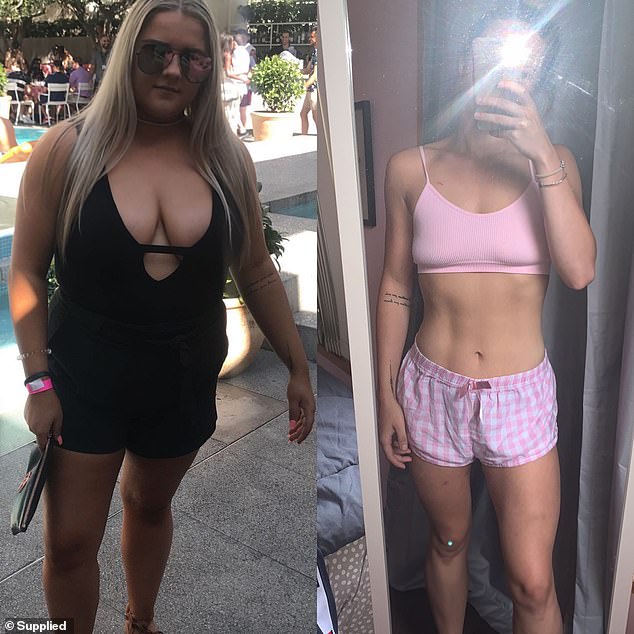 ‘In Year 12 I was the biggest I have ever been – I overate, I didn’t consume anything nutritious and would binge eat packets of sweets at a time,’ Abby recalled. She managed to lose the first 20kg simply by changing her diet and teaching herself about nutrition

Abby managed to lose the first 20kg simply by changing her diet and teaching herself about nutrition – such as what she should eat in a day to fuel her body.

Going for walks also helped her lose the weight quickly, which was her only form of exercise to begin with.

At the time she was working at a childcare and tracked her steps with a fitness watch.

It wasn’t long before she decided to join a gym to participate in group exercise classes, where she lost the excess weight fast.

‘I wanted to take it to the next level; I started with cardio then fell in love with weights,’ she said.

At one point she lost another 10kg but started to plateau but couldn’t understand why.

‘I was doing everything right by eating 1700 calories a day, tracking my meals and exercising – then I realised I needed to eat excess calories in order to lose more weight rather than stay in a deficit,’ she said. 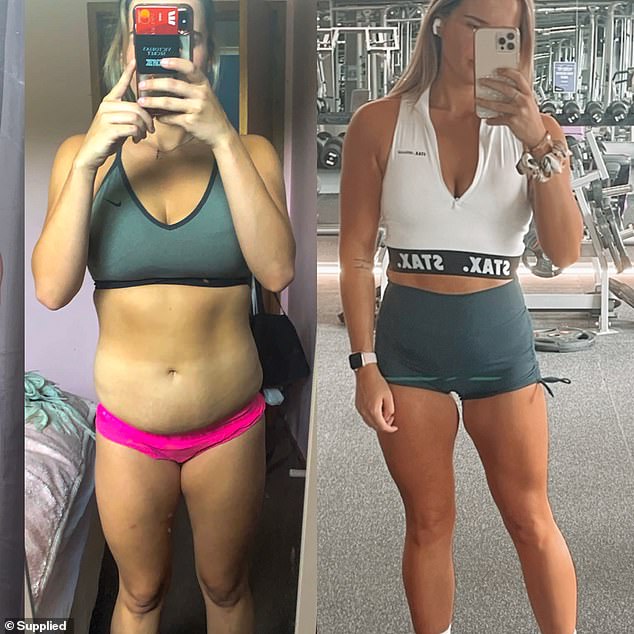 It wasn’t long before she decided to join a gym to participate in group exercise classes, where she lost the excess weight 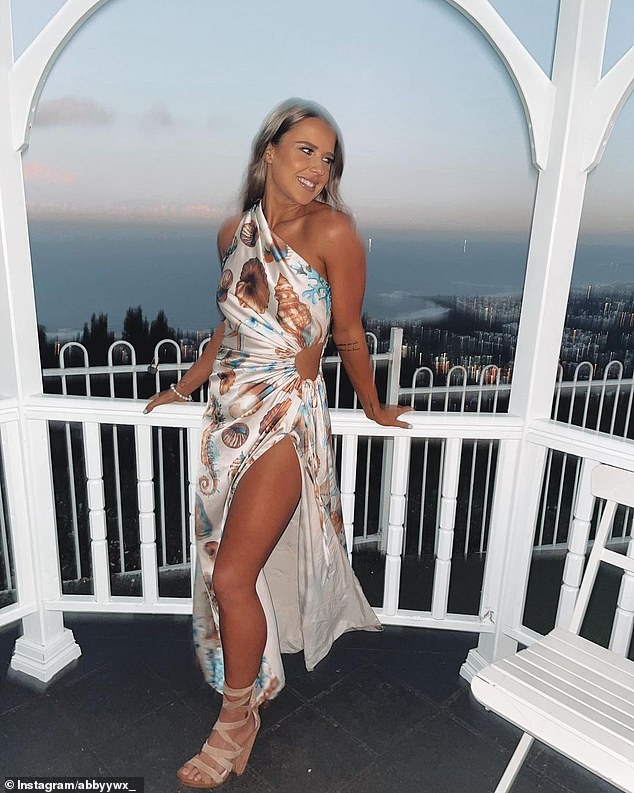 Abby admitted she became ‘obsessed’ with the numbers at one point, though clarified she never fell into an eating disorder.

‘I was tracking everything and started to feel guilty if I ate something I shouldn’t have, and when I realised that I made sure to snap out of it,’ she said.

‘At times I felt overwhelmed with it all, I was scared of falling back into my own habits and gaining the weight again.’

By eating 2200 calories of nutritious foods daily, she managed to overcome the plateau and drop down to 54kg.

Today she comfortably sits at 58kg and goes to the gym four to five times a week. 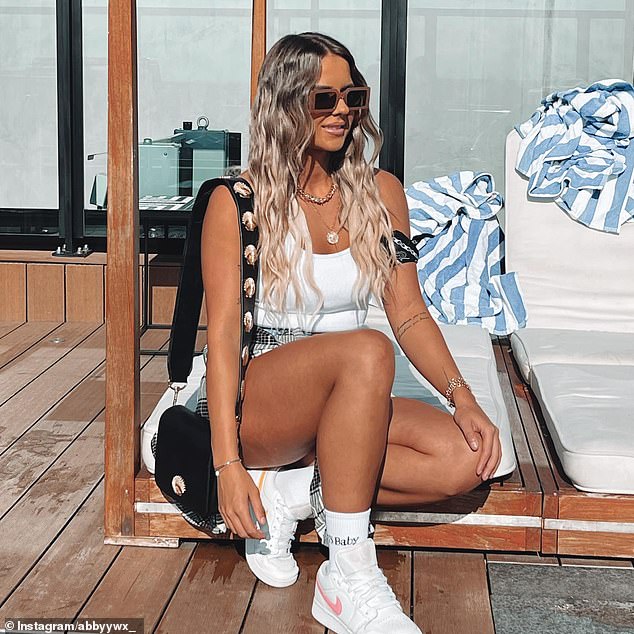 Since losing the weight Abby has worked on maintaining her new-found lifestyle and continues to focus on weight training.

In 2020 she became a personal trainer after being inundated with messages on Instagram from others wanting to know how she shed the weight.

‘I remember personal trainers used to make me feel amazing when I was losing weight, so I wanted to help other people too,’ she said.

‘I feel like going through it all – physically, mentally and emotionally – helps me related to clients I work with even more now.’ 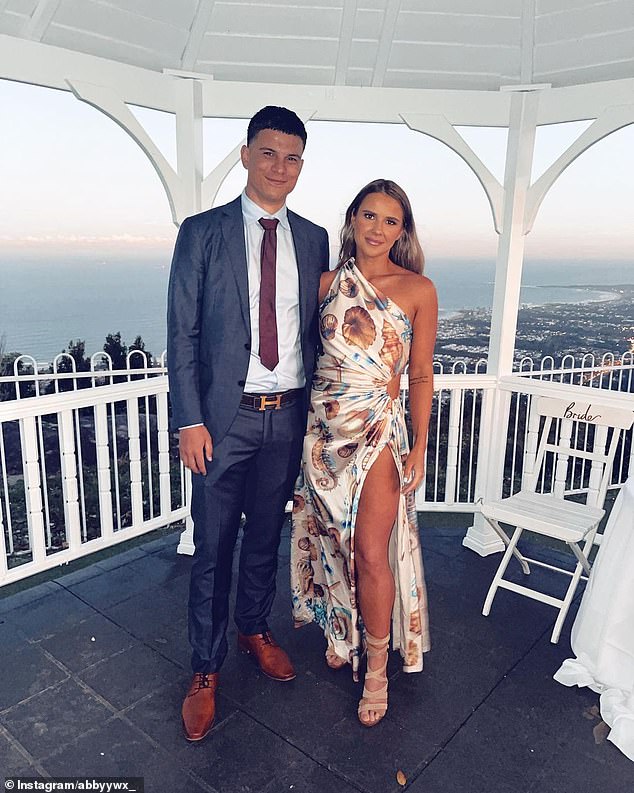 ‘Weight loss is looked at as a number on the scales or a dress size, but it’s so much more than that – it’s a lifestyle change,’ she said

When asked what advice she’d give to others wanting to undergo a similar path, Abby said to ‘start and don’t stop’.

‘Weight loss is looked at as a number on the scales or a dress size, but it’s so much more than that – it’s a lifestyle change,’ she said.

‘It’s a lifechanging process; Don’t chase the end result because there is no finish line, you need to still work hard to live well.

Education is key when losing weight, and Abby recommends learning how to ‘find a balance’ between enjoying life and being able to achieve your goals.

Abby’s ‘day on a plate’ today:

Lunch: protein pasta from Coles or Woolworths with vegetables – peas, corn and carrots