A grandmother has begged for help to remove a skip bin that has been left in her front yard for almost six months.

Perth pensioner Jean Willimot, 71, ordered the skip from a bin hire company last November to use in her pre-Christmas clean out.

Six months later the skip is still in her front garden, after her pleas to the business to come and collect the overflowing bin continue to be ignored.

Perth grandmother Jean Willimot, 71, (pictured) says she has called the skip hire company hundreds of times and even visited in person, but has had no luck removing it

The eyesore has earned the 71-year-old the unwanted nickname ‘the lady with the bin’ from her neighbours.

Ms Willimot said she hired the skip because a council pick-up would take several months and she thought the company would be faster. 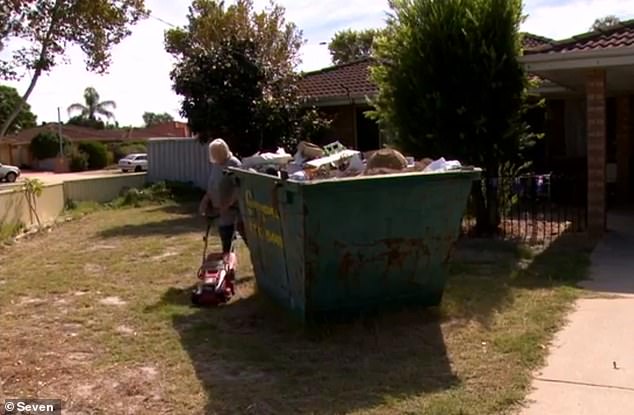 Her local council, the City of Swan, are unable to remove the bin because the business isn’t in their area.

The 71-year-old claims she has contacted the company hundreds of times, and even visited in person, but has made no progress shifting the skip for almost six months.

While the skip bin company still has an active website, neighbouring businesses say they moved their office several months ago.

The website states employees are currently working remotely due to Covid-19, and asks customers to either call or fill out an online booking form.

Consumer Protection was able to track down the owner of the business, who has since stopped answering calls from the Watchdog.