A prized showhorse had its stomach ripped open by an American Staffordshire Terrier in front of young children at a beach.

Blake Weller, 36, was riding his horse Ku at Whitfords Animal Beach, Perth, on Saturday, when the dog attacked.

Ku was left with a gaping and bloody wound on the side of his stomach and Mr Weller was thrown onto the sand.

Mr Weller, pictured holding Ku, is desperate to find the owner of the dog that attacked his horse

Mr Weller told Seven News he ‘couldn’t believe his eyes’ when the dog lunged towards Ku and was forced to use his whip to try and defend his horse.

He said the dog’s owners refused to take responsibility for their pet following the attack.

Mr Weller told Daily Mail Australia: ‘The guy said it couldn’t of been his dog as it has no blood in its mouth.

‘The denial is what really annoyed me and he said that in front of everyone.’

Mr Weller said it took the man and woman five minutes to get their dog.

‘They said they were at the other end of the beach. I don’t believe that they were down there. I believe they watched the whole thing,’ he said.

He said the couple said their dog had never done anything like that before and they were unaware horses would be at the beach.

Mr Weller said his animal’s life has been changed forever. 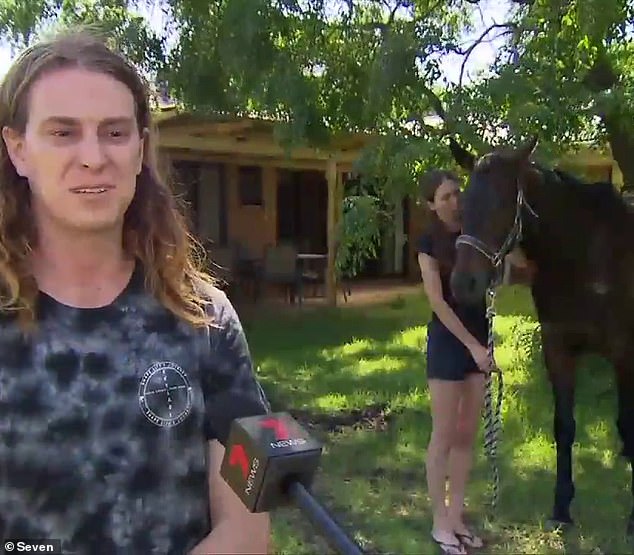 ‘He’s eating which is a good thing and he’s got a whole big course of injections to have over the next week.

‘It’s what the future holds for him is the bad part – where that rip is, is where your leg goes when asking the horse to turn.’

He said Ku is going to be left with a massive scar.

Mr Weller said he has reported what happened to the City of Joondalup rangers, who allegedly know the dog owners’ identities.

The dog beach and the horse beach sit side by side and dogs are allowed in the area designated for horses.

Ku will be left with permanent scarring following the horrific attack at Whitfords Animal Beach, Perth, on Saturday

However dogs must be kept on leashes during the morning from Monday to Saturday.

Dogs can be off-leash at any other time on the beach.

Mr Weller said: ‘I just want to make people aware that your dog should be put on a leash at the horse side of the beach. Dogs like that are unpredictable.’

He said if a smaller person was riding the horse and it bolted it could have been much worse.