Pervert, 62, who was caught upskirting teenage schoolgirl in Co-op supermarket after placing his mobile phone in shopping basket is facing jail

A pervert caught upskirting a schoolgirl inside a Co-op store after placing his mobile phone in a shopping basket is facing jail.

Graham Smith, 62, bumped the basket into the teenager’s left leg as he stood behind her in an aisle of the supermarket in Bournemouth on December 10 last year.

The victim looked down towards the basket, where she spotted a camera phone facing up at her.

Smith immediately paid for the items in his basket and fled the store.

Using CCTV footage from inside the Co-op, police were able to track Smith from the registration of his silver Vauxhall van.

Officers subsequently arrested him at his home in Christchurch, where he admitted upskirting a second schoolgirl in the same shop just a few minutes before he was caught. He said it was the first time had had attempted to upskirt someone.

In police interview, he also told officers that, after recording his unsuspecting victim, he would travel to a cliff top to smoke a cigarette and watch the videos for his own sexual gratification.

In a brief hearing at Poole Magistrates’ Court, Smith admitted a charge of recording an image beneath the clothing of another person to observe without consent.

Graham Smith pictured leaving Poole Magistrates’ Court, where he admitted an offence of recording an image beneath the clothing of another person to observe without consent

Siobhan Oxley, prosecuting, told the court how Smith followed the two victims around the shop at 8.20am while waiting for them to pick something up off the shelves.

He tended to loiter in the chilled aisle for his unsuspecting victims, she said.

‘Initially unsuspecting one of the girls was lifting an item down from a shelf when he connected with her left leg.

‘She realised what was happening and noticed the camera in his basket. He walked away, paid for his goods and leaves the store.

‘He drove away in his silver Vauxhall van before being arrested at his home and taken to Bournemouth Police station. 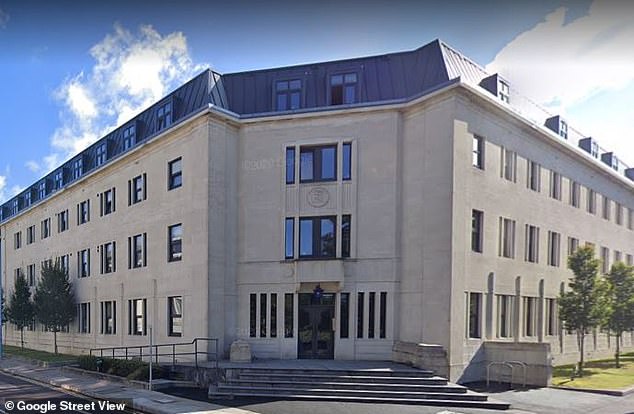 ‘A statement from one of the girls revealed that she noticed it was “an Android phone with the camera facing up”.’

The prosecutor said the incident had left the victims ‘alarmed and distressed’.

David Hurley, mitigating, said that the judge would require a pre-sentence report.

He said: ‘You will see the defendant has no previous convictions and he stands before the court with good character.’

Smith will be sentenced on November 10.