Camera pervert is caught on camera! Man takes upskirt pictures of a woman… unaware HE is being secretly filmed by witness’s dashcam in Singapore

This is the moment a pervert is caught out by the dashcam of a parked car as he takes secret upskirt photos of a woman.

The man points his phone camera up the woman’s dress while her back is turned before pretending to look at the screen when she turns round.

She walks away unaware of what had happened but the man’s covert filming had itself been caught on camera by a driver’s dashcam nearby.

The motorist later watched the dashcam footage, filmed in the Tai Seng area of Singapore, and handed it to authorities.

Secret camera: A man holds his camera underneath a woman’s dress in a multi-storey car park in Singapore unaware that he himself is being secretly filmed

In the video the women and two men, all smartly dressed, are walking through a multi-storey car park.

The covert filmer walks closely behind the woman, crouching down with the flash on his camera clearly visible.

As two of them point to something in the distance and stop, the man bends down and puts his camera lens right underneath the woman’s dress.

As the other man turns around, the filmer quickly lifts his phone in front of him and acts as though reading something on the screen.

The other man appears to turn around before the pervert had lifted his camera away but does not appear to suspect anything. 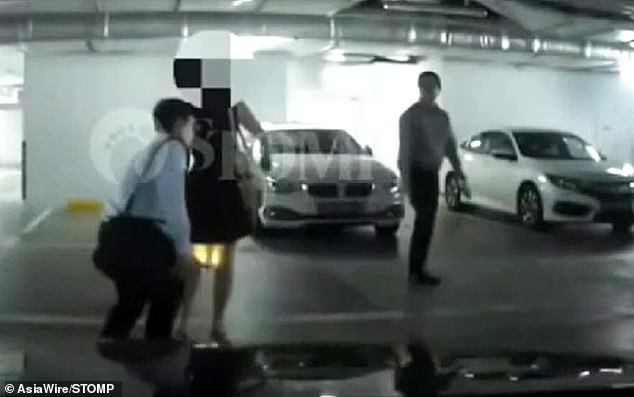 Caught in the act? The man quickly moves his camera out of the way as the other man turns around but he does not appear to have noticed anything 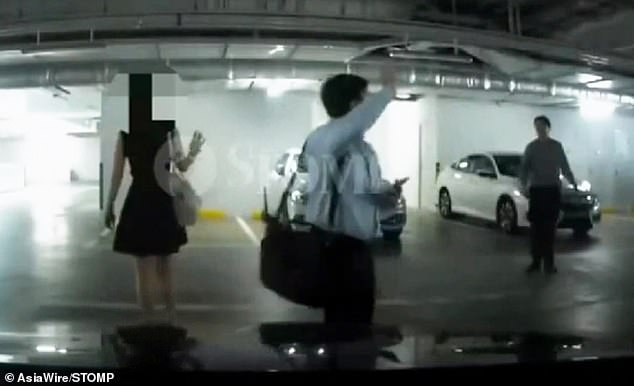 Playing innocent: The filmer waves the other man goodbye before walking away in full view of the dashcam on the parked car nearby

The filmer then walks off in the other direction with the woman, unaware that he has been caught.

The video was recorded by Kenneth Tan’s dashboard camera and he told local media he had been in his car talking on the phone when the incident happened.

He says because the incident happened so quickly he was not sure what exactly had occurred until he downloaded the footage.

Tan has filed a criminal complaint and said he hopes the woman involved can be informed what happened.