It’s no secret that plenty of pets struggle to deal with separation anxiety when their owners leave them at home for the day.

Some pets cry, paw, or give their best puppy eyes to try and persuade their humans not to leave, but one cockatiel’s tactic is to impersonate one of its owner’s favorite things: his cell phone.

In a new viral video, an adorable bird named Lucky reacts to his owner Mike McCafferty getting ready to leave by singing a note-for-note rendition of the iPhone ringtone. 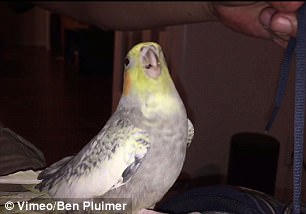 A sweet plea: A cockatiel has gone viral for a pitch-perfect impersonation of the iPhone ringtone, which he sings whenever he’s upset 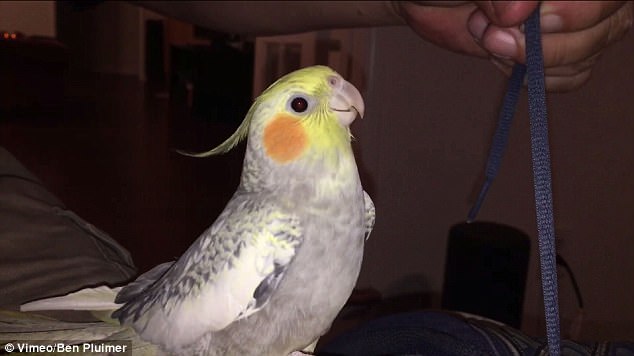 Not liking what he’s seeing: Lucky is seen in the video watching his owner tie his shoes and singing the song in distress

The man is laying his other leg across the thigh the bird is sitting on and trying to tie his shoes while the grey and yellow bird looks on with concern.

Lucky then begins to play a song familiar to all iPhone owners: the standard ringtone included with each of the Apple phones.

The strikingly electronic sounding song continues as Lucky fidgets in his owners lap, lifting his head to watch the shoelaces move. 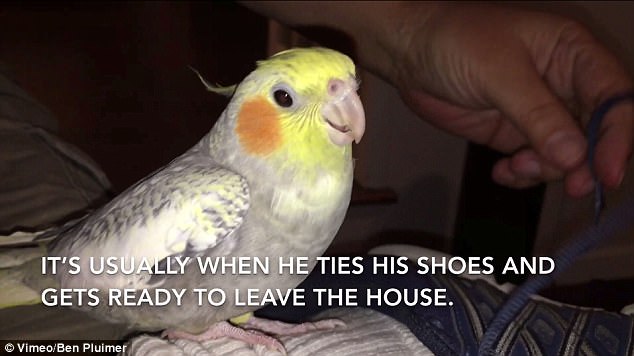 Quite a voice: The bird appears to be trying to get his owner’s attention with the song 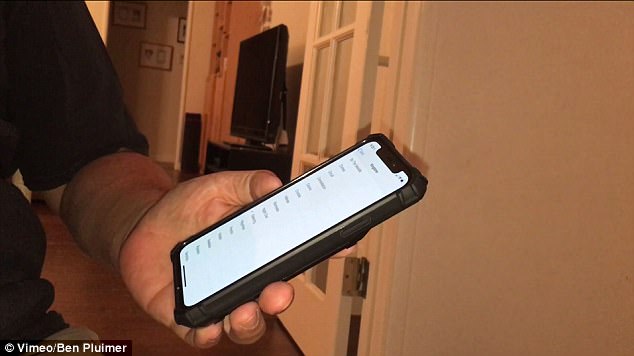 The source: The owner then plays the ringtone in the video, showing how bang on Lucky’s impression is 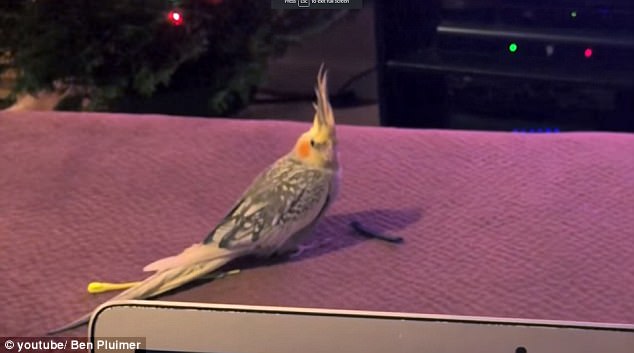 Follow-up: Ben posted another video of Lucky on Wednesday, showing him playing the bird his own viral video

Ben later shared the video online, including on Reddit where it proved an instant hit, eventually gaining more than 87,000 upvotes.

‘My friend’s family has a cockatiel named Lucky. Whenever Lucky gets upset, he sings an Apple ringtone,’ Ben wrote in the caption for the video on YouTube.

‘It usually happens when they tie their shoes to get ready to leave the house. It’s adorable, and also pitch perfect.’

On Reddit, the post led to dozens of other users sharing stories of their own clever feathered friends. 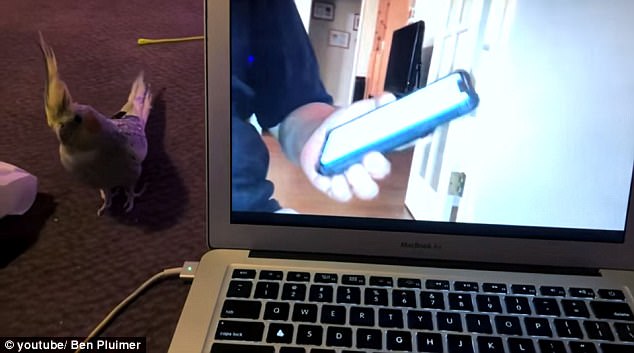 Curious: With his crest feathers raised, Lucky doesn’t appear to like what he’s hearing 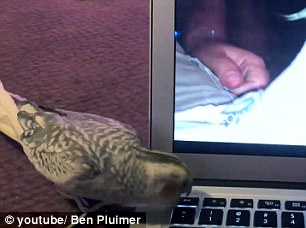 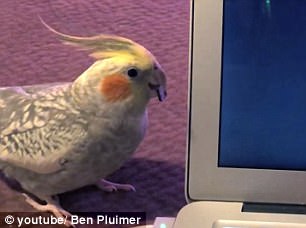 Retaliation: The bird listens for another moment before walking over and tearing the escape key off the keyboard

‘Beats the hell out of imitating the smoke detector like my parrot does,’ remarked one user, while another added: ‘We had a cricket in my house for two days but my cockatiel reminded us of it for three years.’

Multiple users even said that their birds would imitate entire phone conversations, complete with the ring, an answer, mumbled conversation and ‘bye’ at the end.

On Wednesday, Ben shared another video of the adorable pet, writing: ‘Lucky became famous for singing a perfect rendition of an iPhone ringtone. But watch what happens when he sees his own video! Dude is OVER it.’

The clip shows Lucky listening to himself sing on Ben’s computer, lifting his crest feathers and turn his head as he listens. He wanders with curiosity towards the computer, listening some more for a moment before moving to the keyboard and angrily tearing off the escape key.