Pet tortoise climbs hill just to slide down on his belly

Not too fast! ‘Grinning’ pet tortoise gets his daily workout by climbing up a hill and sliding down on his belly

This adorable pet tortoise has been exercising by climbing up a hill and rewarding himself afterwards by sliding down the hill on his belly.

Ricky Bobby, an African sulcata tortoise that now weighs in at 100lb, was given to Kristina Young and her sister in Santa Clarita, California, when Kristina was 15 years old.

Kristina was shocked when she first went to visit her father, Matt Cohen, 60, and he told her that her old pet likes to slide down a hill every day.

Once Ricky Bobby gets to the top of the hill at his home in Santa Clarita, California, he stretches his legs in front of him and slides down on his belly

She filmed Ricky Bobby going through his bizarre routine, clambering up the hill, stretching his two front legs in front of him and then sliding down on his belly.

The 15-year-old tortoise, who looks like he is ‘grinning’ comes to a halt as the hill plateaus and then takes his time getting back onto his feet to climb back up again.

Kristina said: ‘I was in shock when dad told me Ricky Bobby was going to slide down the hill so I started filming thinking it was a joke and sure enough there he went!’

The stay-at-home-mother added: ‘He never did anything like this when I lived at home but dad built a ramp so he could go up that hill and have more room to walk around in about 10 years ago.

‘Every day since then in the spring and summer, he has been sliding down the other side of the hill.

‘You can see how much he really enjoys it.’ 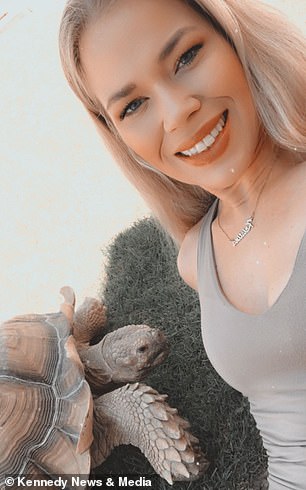 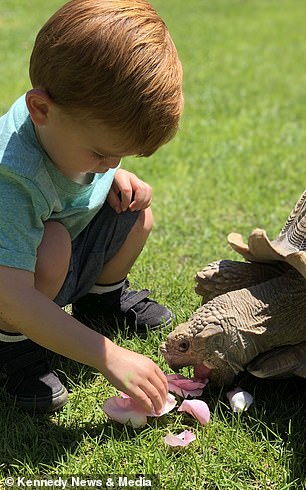 ‘Everyone who has seen the video think it’s the cutest thing they have ever seen.’

Kristina posted the video on Facebook which was shared over 16,000 times and viewed more the 295,000 times. 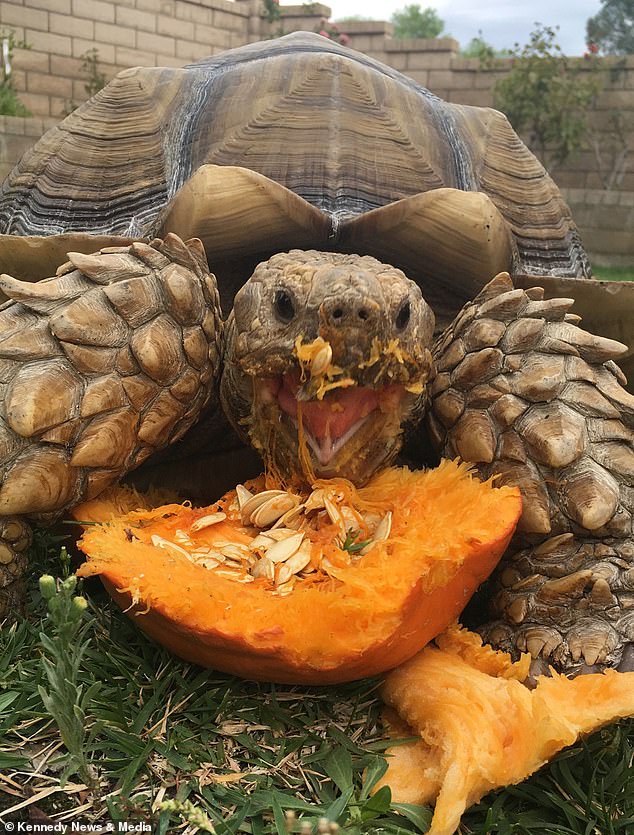 Ricky Bobby, an African sulcata tortoise that now weighs in at 100lb, tucks into some pumpkin