The comedian, 27, has been romantically linked with mother-of-four Kim, 41, following her Saturday Night Live hosting debut in October.

But Pete – whose exes include Ariana Grande, Kate Beckinsale, Kaia Gerber and Phoebe Dynevor – made light of the rumpours while promoting new show The Freak Brothers.

Dating speculation: Pete Davidson joked about speculation that he’s dating Kim Kardashian on Monday during an appearance on Late Night With Seth Meyers on NBC

‘I want to address something. I feel like I want to confirm if it’s real,’ said Seth, referring to his various sightings with Kim.

Cutting in, Pete joked: ‘There’s a lot of people I walk by, people are like whispering, and, you know, making eyes at me. And, you know, but it is true. I do have a show on Tubi coming out.’

Pete was on the NBC show promoting the animated series The Freak Brothers ahead of its Tubi premiere on November 14. 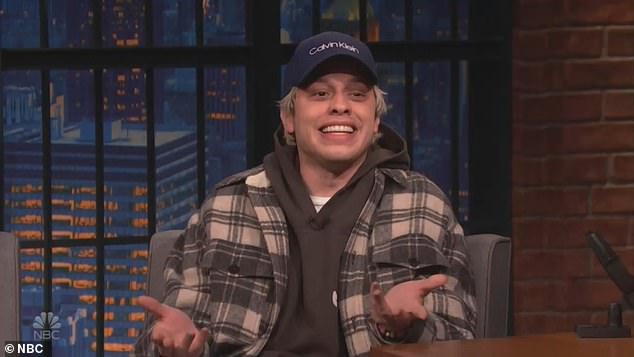 Under observation: ‘There’s a lot of people I walk by, people are like whispering, and, you know, making eyes at me,’ Pete said 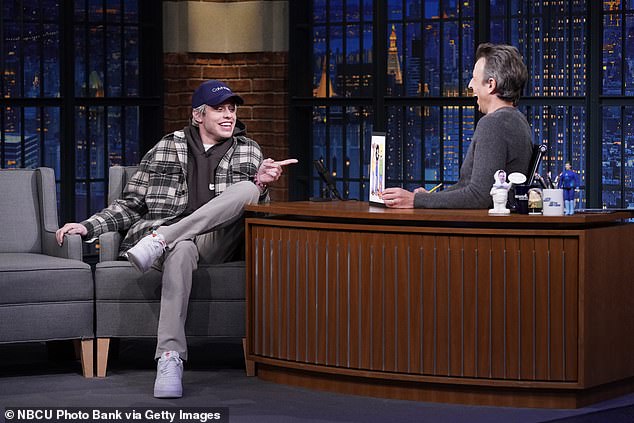 Animated series: ‘A lot of people are shocked that I could get on a show like Tubi,’ Pete said of his new animated series The Freak Brothers

It follows a group of stoners who get high and wake up 50 years later.

Saturday Night Live star Pete also admitted he’s  been getting ticket requests since Taylor Swift, 31, will be the next musical guest on the NBC comedy show.

‘Yeah, nobody is leaving me alone about it. I just tell everybody that like… they don’t give me tickets,’ Pete joked. 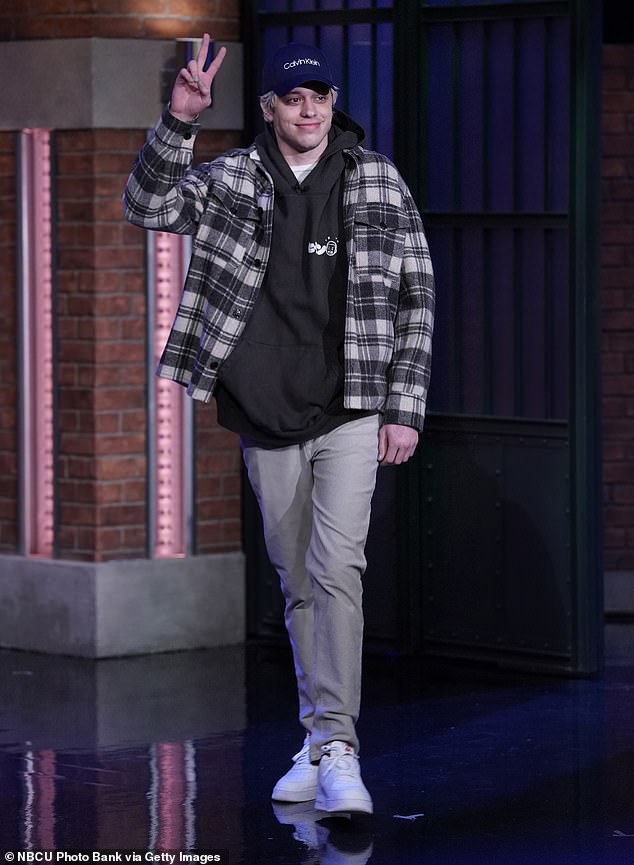 Ticket requests: Saturday Night Live star Pete also shared that he’s been getting ticket requests since Taylor Swift, 31, will be the next musical guest on the NBC comedy show

Sources close to Kim say her close circle of friends and family encouraged her to let loose with Davidson following the collapse of her marriage to Kanye West.

An insider told Us Weekly on Saturday that Kim’s close confidants said she should ‘go for it’ as she debated spending time with Pete.

‘One of the first things Kim did was to get her family and friends’ advice, and they all encouraged her to go for it,’ the source said of the Keeping Up With The Kardashians star. ‘It’s been very obvious for a while now that she’s been missing some fun and laughter in her life, and of course Pete offers that in abundance.’

Part of the comic actor’s appeal for Kim is that he’s so ‘witty and laid back,’ which may be a departure from her estranged husband Kanye West’s hard-charging lifestyle.

‘It’s so refreshing for Kim to be dating someone who’s almost the total opposite of her previous relationships,’ the source added. ‘Pete’s just chill and doesn’t sweat the small stuff at all, which Kim finds really sexy.’

However, even though her friends and family said it was worth giving the relationship a try, they’ve also warned her not to get ‘carried away’ too soon after they started dating.

‘People are happy for Kim, but at the same time they’re urging her not to get too carried away or ahead of herself,’ the insider continued. ‘Pete has this heartbreaker reputation for a reason, and while his intentions might be honorable, there’s a slight fear that Kim could be setting herself up for a vulnerable situation.’

In 2018, he dated Ariana Grande and got engaged to the pop star just weeks after they started dating, before the split later in the year.

He didn’t seem to mind the age difference with actress Kate Beckinsale, 48, when they dated for a few months in early 2019.

He followed the relationship up with brief flings with actress Margaret Qualley and model Kaia Gerber, before most recently dating Bridgerton star Phoebe Dynevor earlier this year.

According to insiders close to TMZ on Saturday, Kim and Pete appeared ‘very comfortable’ with one another during their dates in New York City this week where they ‘displayed plenty of PDA’.

The pair are said to have enjoyed a private rooftop dinner at Campania in Staten Island on Tuesday, followed by a group outing at club Zero Bond on Wednesday.

A source reportedly told the publication staff at Campania were not allowed to frequent the rooftop, with the restaurant’s owner catering to their needs.

Furthermore, another source claimed Pete was the ultimate gentleman and called Zero Bond ahead of their date to provide them with his credit card details.

While TMZ suggest the back-to-back dates are more than just a ‘week long fling’, it’s been claimed Kim is not yet ready for anything serious and is simply enjoying dating.

A source close to Kim exclusively told DailyMail.com Pete is ‘very aggressive’ with her as he often ‘grabs her waist, compliments her butt and touches her hair’ when they are together.

‘He is extremely sexual and in her face. He is making it crystal clear he likes her,’ the confidant said. ‘He definitely is not being aloof or playing coy, he is just going for it. And she seems to be loving the attention. It’s nice to see her happy.’