He’s given up drugs and embraced a clean-living approach to life, reportedly now fond of a game of pétanque and a ‘nice glass of water’.

And rocker Pete Doherty was back on stage on Monday night as he performed at the annual Make Music Day concert at the Arenes de Lutece in Paris, France.

After playing a few tunes, the once wild star of The Libertines and Babyshambles, 42, tipped his flat cap to flash his dishevelled grey locks and beamed a grin.

Pete kept things casual for his show, donning a blue and white striped T-shirt under a grey blazer and matching suit trousers.

The star rolled up his sleeves a little, creating white cuffs and giving a glimpse at his arm tattoos.

He appeared to be having a fabulous time on stage and could not stop smiling while working through his set alongside several other musicians.

Everything seemed very civilised for the show – a far cry from some of the rowdy gigs played during his rocker days – with the crowd intently listening to the music. 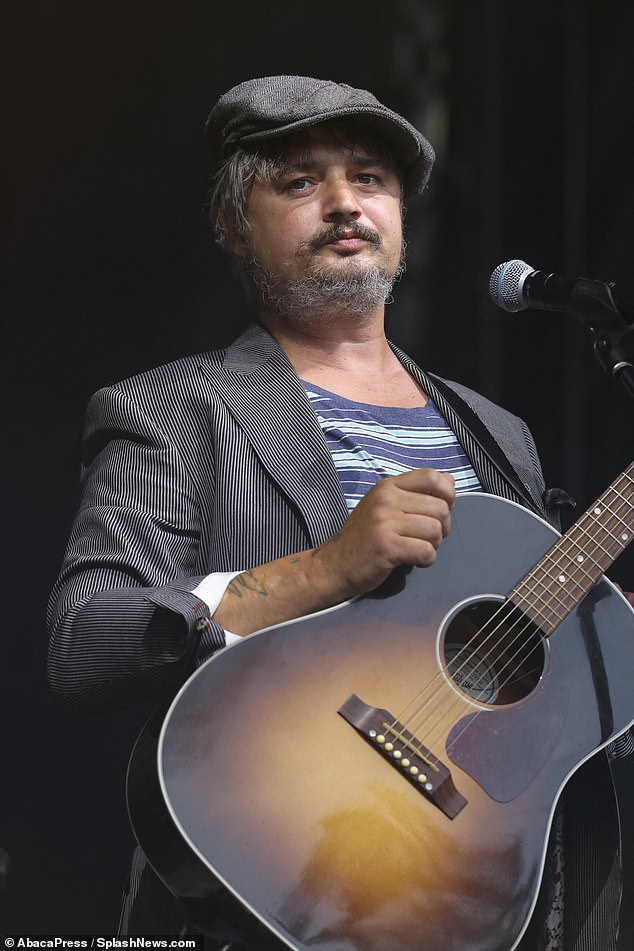 On stage: The star of The Libertines and Babyshambles, 42, kept things causal in a striped T-shirt and suit for the outside gig

The Make Music Day concert started in France but now sees more than 1,000 cities around the world throw citywide music celebrations on June 21.

In France, the event – known as Fete de la Musique – is a free concert organized by Fip Radio. 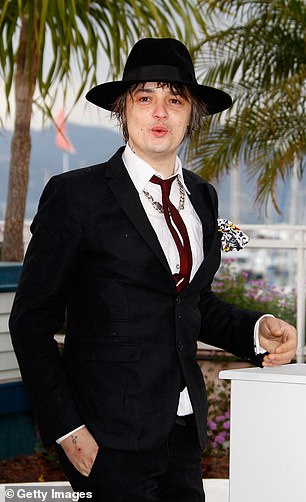 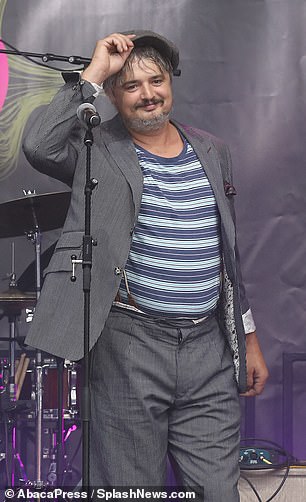 Changes: Pete (pictured L in 2012) has been sporting a fuller physique in recent times, and he looked markedly different from when he was the frontman for rock band Babyshambles 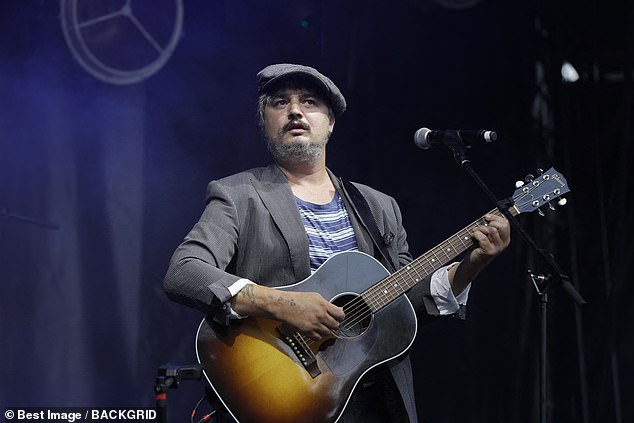 Performer: The star rolled up his sleeves a little, creating white cuffs and giving a glimpse at his arm tattoos 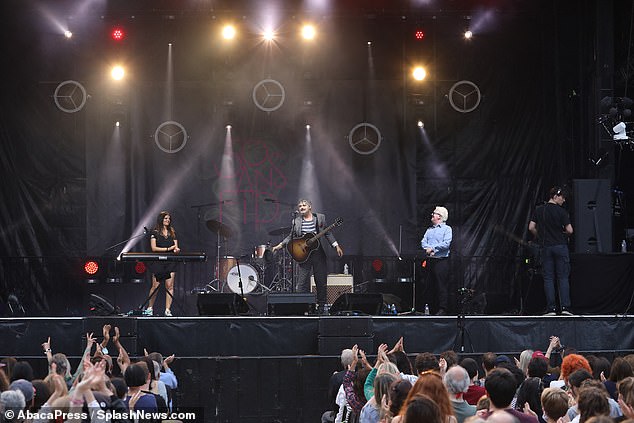 No mosh pits here: Everything seemed very civilised for the show – a far cry from some of the rowdy gigs played during his rocker days – with the crowd waving their arms while listening 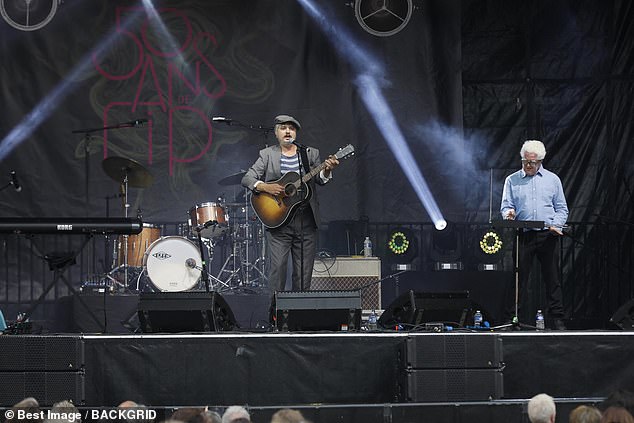 Keeping at it: Pete now plays with his band Peter Doherty and the Puta Madres in France

It comes after Pete recently said he has been doing a lot of sleeping, eating French cheese and drinking water following his move to Normandy.

He is generally enjoying a much slower pace of life these days and has reportedly taken to the bowls-style sport, pétanque.

Pete is believed to join the locals at their club for a game of the French sport, which consists of throwing metal balls as close as possible to a target.

The once-troubled star, who lives with his film editor girlfriend Katia, has quit heroine and ketamine but revealed he still enjoying whipping up a cocktail. 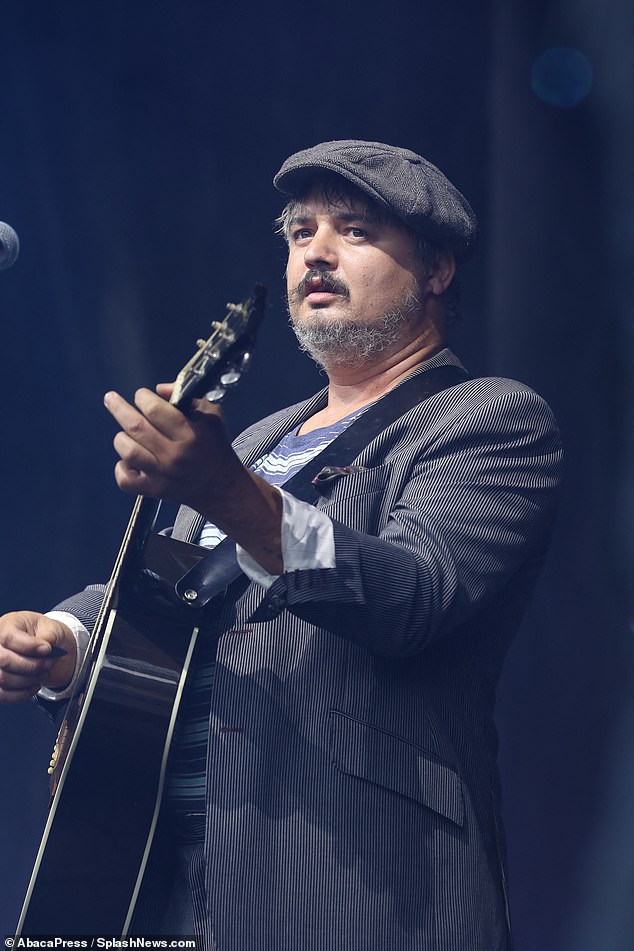 Smart: Pete donned a flat cap for the gig and seemed right at home singing on the stage 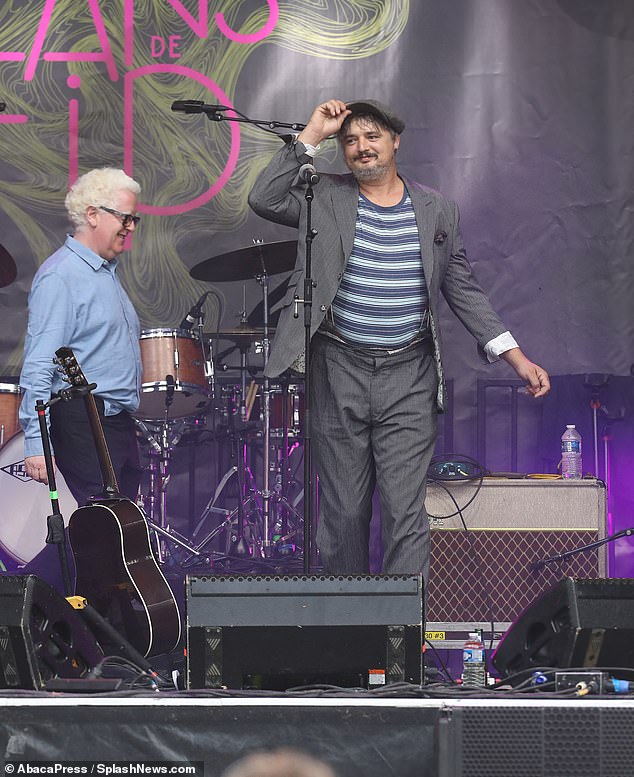 Making an entrance: The rocker tipped his cap during the performance and was joined by other musicians 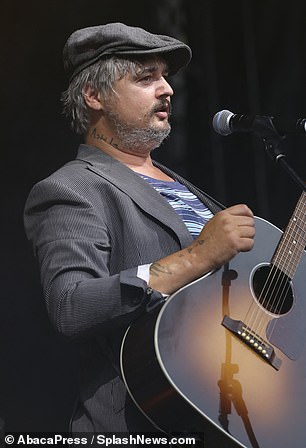 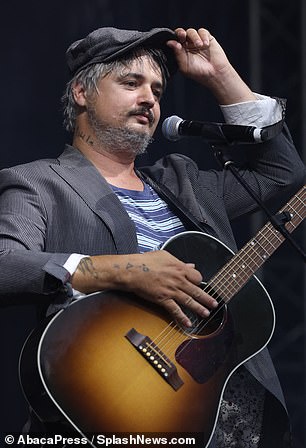 French living: Pete has now given up drugs and embraced a clean-living outlook on life after moving to France (pictured on stage in Paris on Monday) 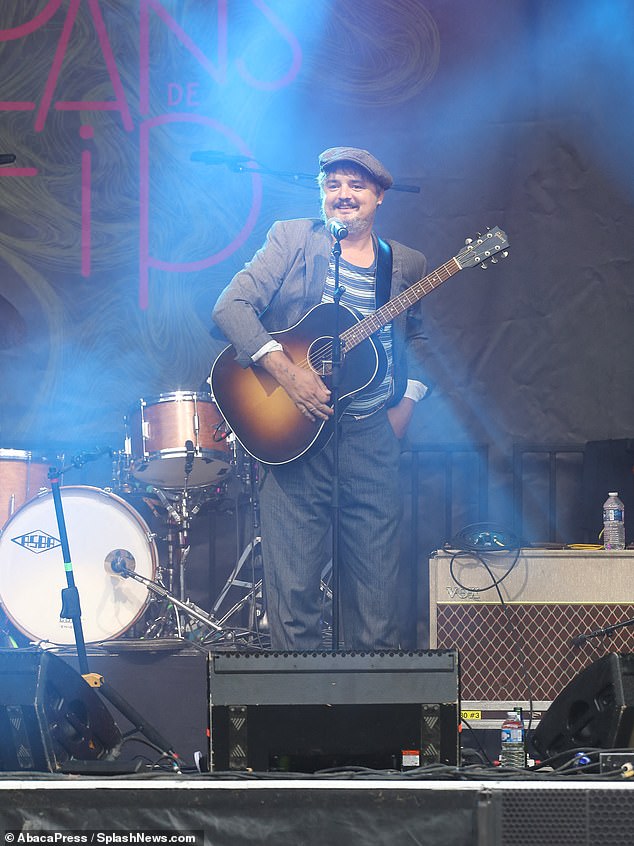 Beaming: Pete could not stop smiling during his set at the annual music festival in the city 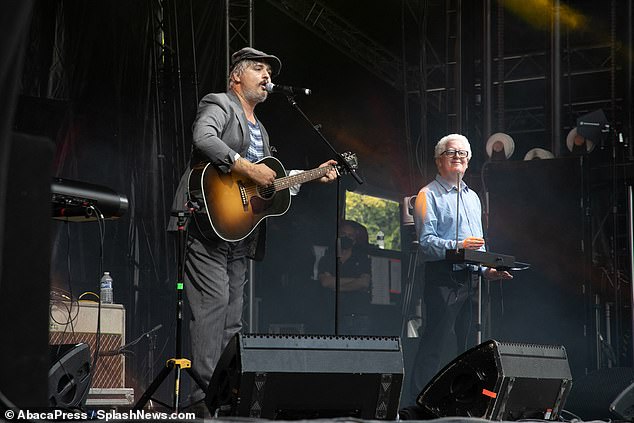 In his element: He leaned towards the microphone stand for one of the set list

One local told the Sun: ‘Peter is no longer a bad boy. He’s relaxing, settling down and loving the goods things in life.

‘We introduced him to pétanque and he’s fallen in love with the game. He often joins our club nights when we play.’

Mikael Grondin, who runs the bakery, said: ‘He is always popping in for a bag of Bout de Choux (creamy little cabbage), which is a pastry filled with cream. Maybe that’s why he’s put on weight but, don’t worry, these will be good for him.’

And Pete revealed recently that he especially enjoys cheese on toast and that his ‘guilty pleasure’ is sleeping after he used to stay up for ‘six days’. 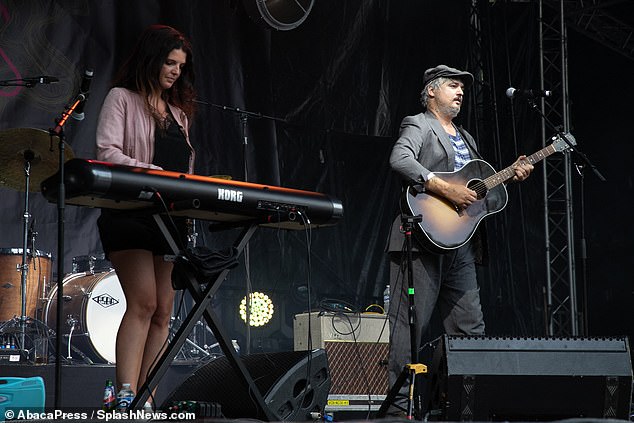 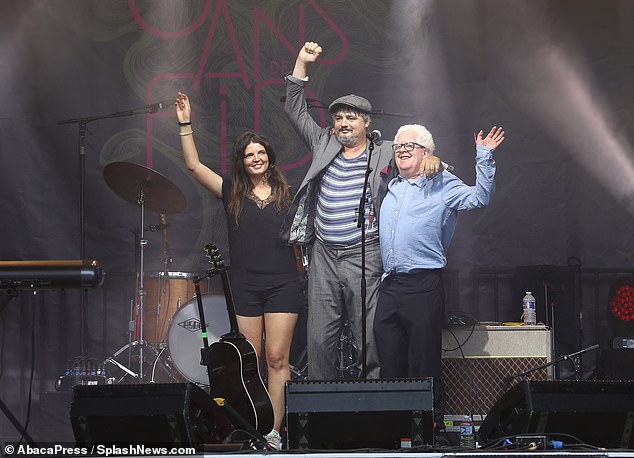 Band: Now based in France, Pete plays with his band Peter Doherty and the Puta Madres 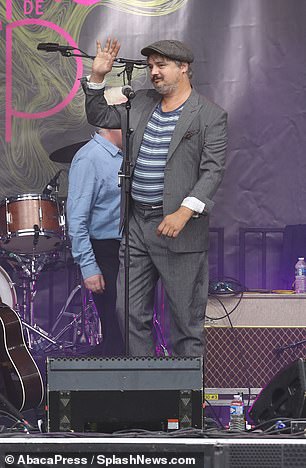 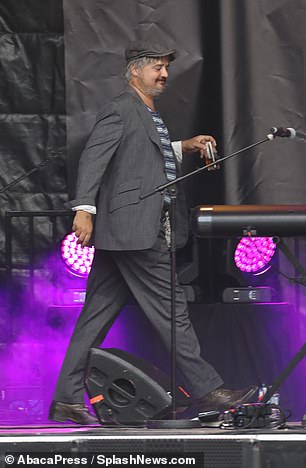 Hello: He gave the crowd, who had to get tickets to attend the free event, a wave (left) and strutted around the stage (right) 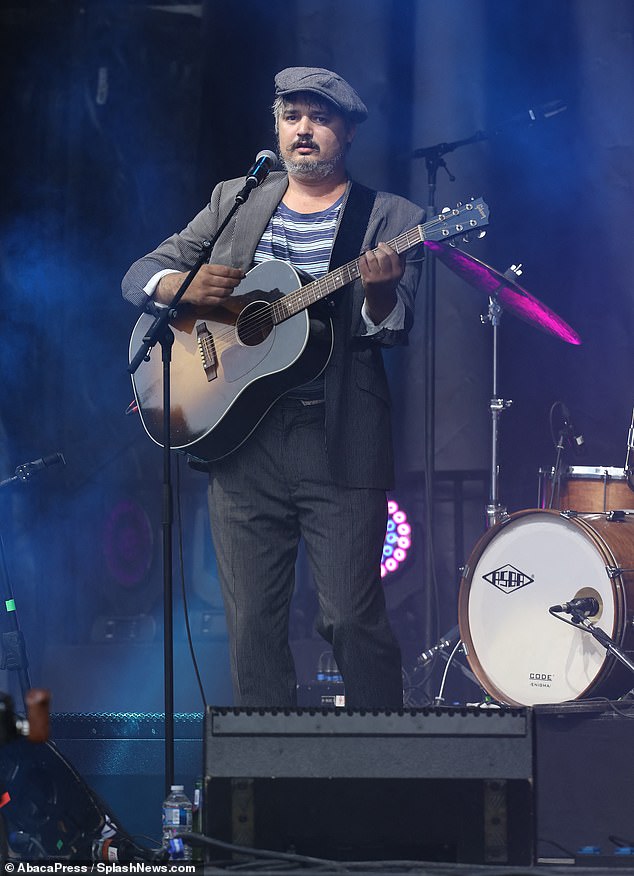 Making music: The previously gaunt rocker shot to fame in the mid-2000s but is now living a quieter life in France with his girlfriend Katia (pictured on stage on Monday)

Talking in a recent interview, Pete admitted that he is now ‘quite clean’ and that he enjoys a ‘nice glass of water’.

The previously gaunt rocker shot to fame in the mid-2000s and has been arrested numerous times for drug offences.

He famously painted a portrait of then-girlfriend Kate Moss in his blood and was thrown out of a luxury rehab in Thailand for ‘not trying hard enough’ to kick his heroin habit.

He told The Sun about his new lifestyle: ‘I like Comté [a type of French cheese], Comté on toast. My guilty pleasure is sleeping. 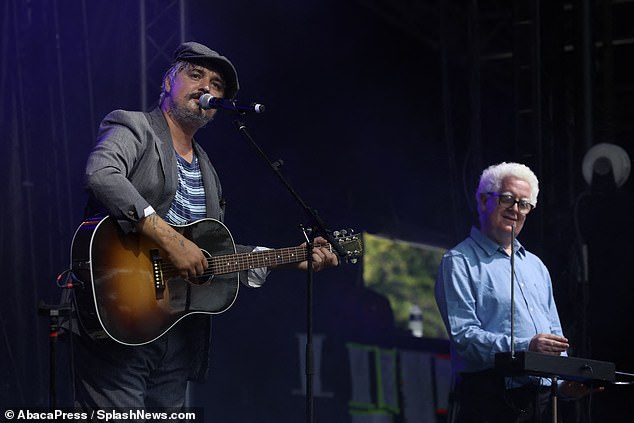 Changing habits: Since turning his back on the rocker lifestyle, Pete has revealed his guilty pleasure is sleeping after he used to go for days without any shut-eye 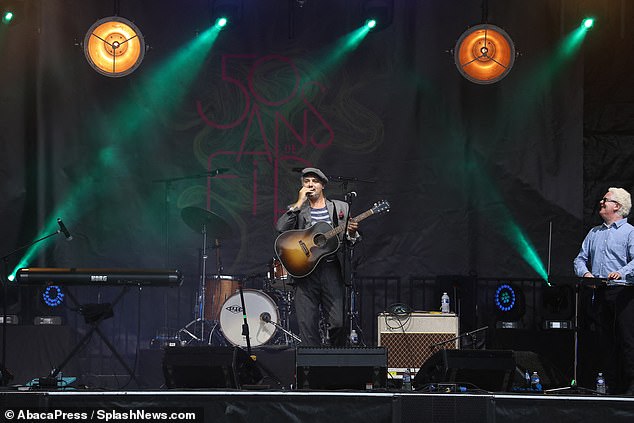 Going for it: Pete’s set was embellished with a fun light display boasting orange and green 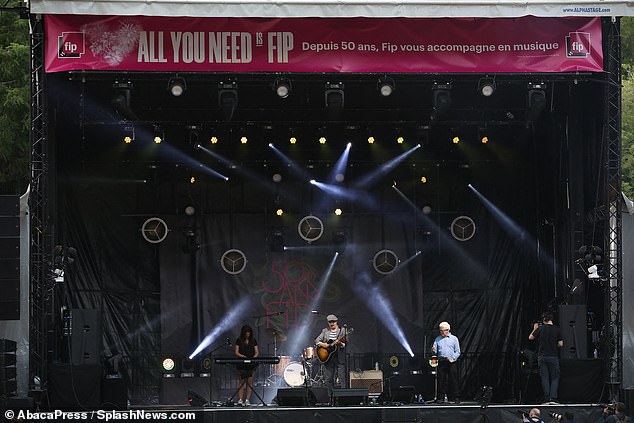 Festival: The Make Music Day happens every year, with lots of musicians taking part (Pete is seen on stage with his band during the event on Monday)

‘For years and years, I would stay up for five or six days and then I would sleep for 24 hours, so now I love sleep.

‘At the moment I’m quite clean. I stopped taking heroin and ketamine.’

Pete’s bad boy rock and roll image earned him an army of fans including the world’s most famous supermodel Moss, who hung off his arm as they made their way from party to party.

But these days, Pete enjoys nothing more than a genteel stroll through the French countryside with his dog. 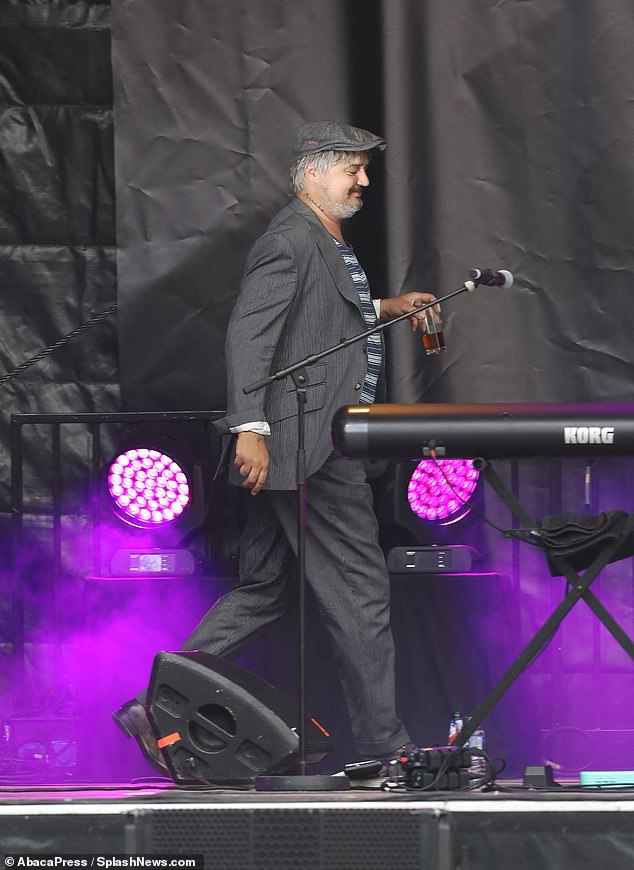 Rocker: Pete’s bad boy rock and roll image earned him an army of fans including the world’s most famous supermodel Kate Moss 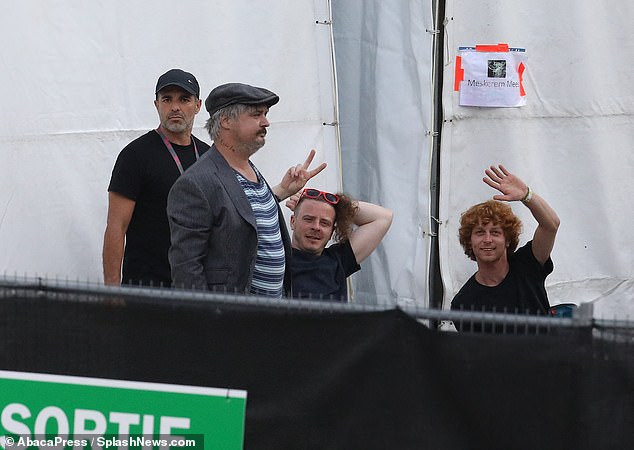 Hanging out: While not singing, Pete chatted to the crew and other muscians backstage

Pete has a teenage son, Astile, from his relationship with Lisa Moorish and a daughter, Aisling, from his romance with model Lindi Hingston.

While his most famous relationship was with Kate, he also had a fling with friend Amy Winehouse and a reported tryst with late Big Brother Seven housemate Nikki Grahame.

Pete’s turbulent relationship with Kate came to an end in 2007, months after he revealed he’d proposed to her.

Last year, the frontman was charged with driving while disqualified after he was stopped by police in the early hours while riding an electric motorbike in Margate, Kent. 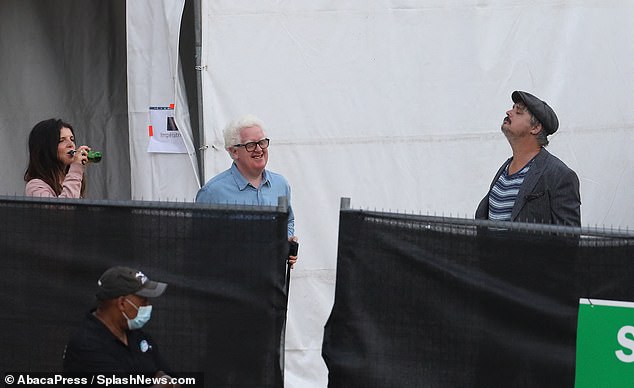 Getting ready: The band were seen laughing and having a quick drink before their gig 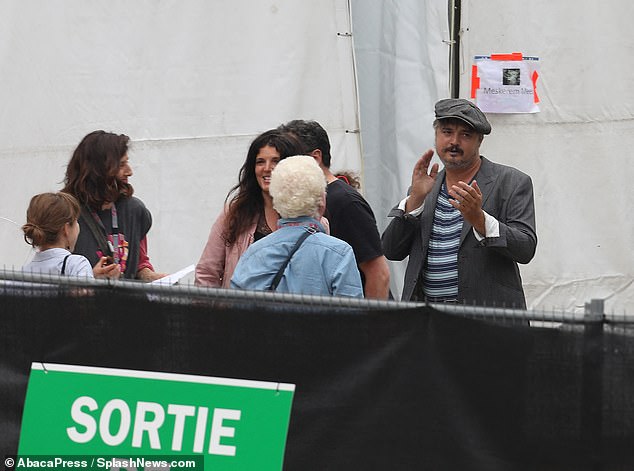 Relaxed: Pete seemed to be having a good time while kicking back before the concert

Pete had already been been given a six-month disqualification in October 2019 after he was caught speeding four times in three weeks.

On that occasion, at Folkestone Magistrates’ Court, he was ordered to pay £9,228 and he was heard to have muttered ‘ouch’ at the fine.

And in November 2019, Doherty was fined £8,500 and given a three-month suspended jail sentence for ‘violence while intoxicated’ after being arrested in Paris twice in a week.

He had been detained in the Pigalle district for buying cocaine before getting into an argument with two passers-by that led to his eventual re-arrest.

Pete is a frequent visitor to Paris, and often spends long periods living and performing in the French capital. 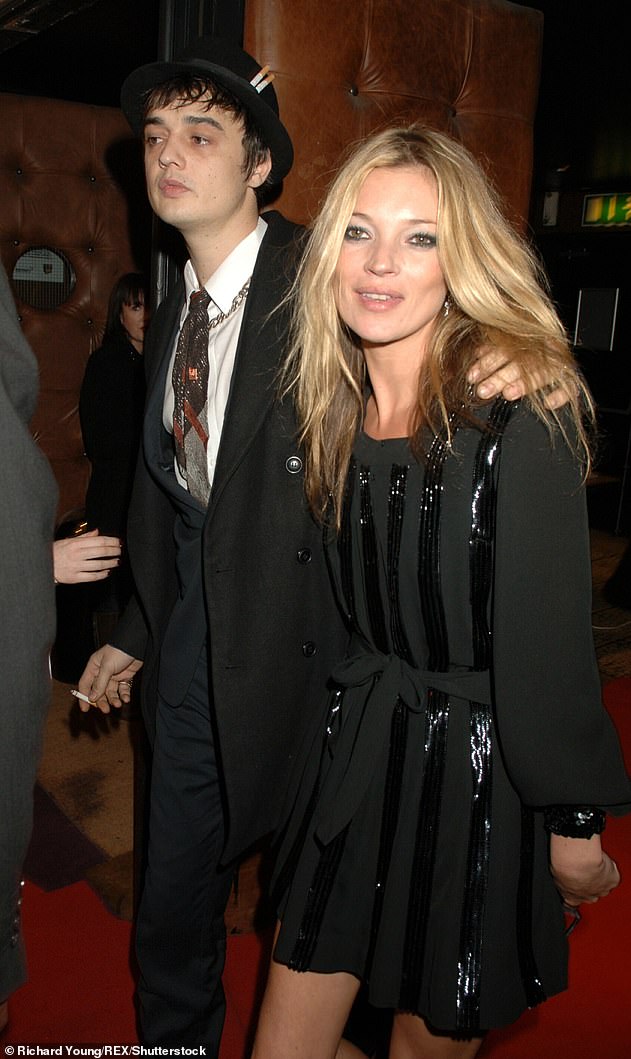 Exploits: Pete’s bad boy rock and roll image earned him an army of fans including the world’s most famous supermodel Kate [pictured together in 2007]