Peter Dutton has revealed how he ‘keeps the home fires burning’ during lockdown in a cringe-worthy interview with Karl Stefanovic and Labor MP Richard Marles.

The defence minister, who married his second wife Kirilly in 2003, is in two weeks of Covid-19 home quarantine with his family after his sons’ Brisbane school suffered a positive case.

In an interview on Nine’s Today show, Stefanovic asked the two MPs how they keep their romantic relationships alive during lockdown.

He said: ‘To you first of all, Pete, I want you to channel your Greg Evans from ”Perfect Match” what is the secret to keeping the home fires burning in lockdown?’

Mr Dutton laughed and complained about being asked first, before replying: ‘The best advice I can give is if you’re asked ”how do I look in this”, just say, ”you look gorgeous, sweetheart”

‘Is it too tight, is it too short, too long? The only response is “you look gorgeous sweetheart”.

He added: ‘There is plenty of time in a relationship for honesty. I have found that is not the time for honesty. Survival instinct has to kick in.’

The three men laughed and Stefanovic joked: ‘I don’t know how Mrs Dutton holds herself back – you are quite charismatic.’

The defence minister, who married his second wife Kirilly (pictured together) in 2003, is in two weeks of home quarantine with his family after his sons’ Brisbane school suffered a positive case

‘She is only two rooms away, I will get feedback in a second,’ Mr Dutton replied from his front porch.

‘I recommend total and unwavering obedience, that’s the line I take,’ he joked.

‘I find that champagne helps, that’s a good go to, but in terms of the home fires burning, expensive gifts of perfume.’

Stefanovic then asked: ‘What about dress-ups or anything like that’ and Mr Marles replied: ‘That’s really Peter’s department so I will leave him to answer that question.

The host laughed uncontrollably before saying: ‘The country doesn’t need to think about that.’ 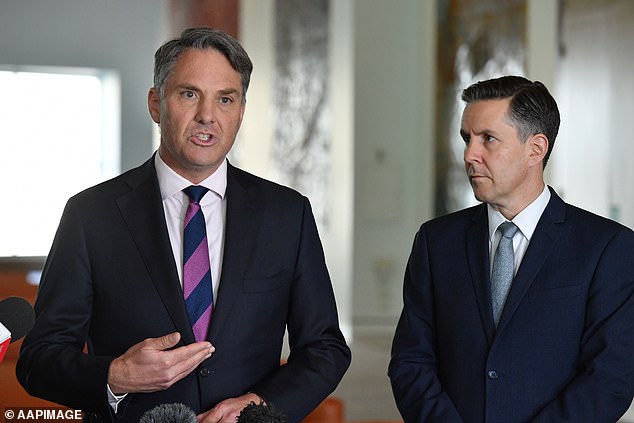