PETER HITCHENS: Don’t be fooled by the sunshine – there are only dark days ahead

I have come to hate this beautiful weather, the loveliest spring for 50 years. I long to wake up to a filthy morning of dirty grey skies and miserable rain, like the one Tennyson described when he wrote ‘ghastly, thro’ the drizzling rain, on the bald street, breaks the blank day’.

This is because I think the British people are lost in an unreal, sunshiny dreamtime of delusion, seeing the current crisis as a sort of holiday after which they can all amble off back to the world.

They once knew, a world that died for ever some time ago. I am reminded of John Wyndham’s terrifying science fiction novel The Day Of The Triffids, in which everyone is captivated by an amazing, spectacular meteor shower – and all those who watch it late into the night, oohing and aahing with delight, wake up the next morning permanently blind.

Except, in this case, we will all be permanently less free and permanently poorer. And that will, of course, include the sacred NHS, which the nation love-bombs every Thursday night but which is already so threadbare that it cannot properly equip its doctors and nurses. Just wait and see how much worse this gets in the coming era of post-shutdown austerity.

Not to mention all the various zealots and fanatics who already see this new world as an opportunity to impose their various dogmas and fads on us. I won’t dwell yet again on the damage the Government has already done, and which deepens every day. I only say that without serious and angry opposition, this will only get worse. This clueless Cabinet is motivated only by fear.

People who strove all their lives for office now have no idea what to do with the powers they thought they wanted, and are terrified of the responsibilities that came with them. They do not understand what they are doing and are not in charge of their own destiny.

And until they are afraid of the wrath of the voters, or perhaps of the courts, they will continue to hide in their bunker, biting their nails and wondering how to get out of the mess they panicked themselves into a month ago. They cannot admit they gravely overestimated the danger of the virus, and gravely underestimated the damage they would do to the economy.

Please write now to your MPs, reminding them that they were elected to put your case to the Government, not the other way round. T ell them that this has gone on long enough and is now bound to cost more lives than it saves, as well as all the other damage. And if you get a reply that has obviously been written by a machine, write again.

This will at least keep within the bounds of constitution and law. For, if something does not give soon, I very much fear that millions will simply cease to obey rules which no longer make sense. Without a clear hope of release from house arrest and forced idleness, many people will despair. And it will be grim for us all if that happens.

Congratulations to the Cambridge Union which on Thursday night held the first proper twosided debate on whether shutting the country is the right response to Covid-19, so shaming Parliament and the BBC, which have yet to do so. To take part in this event on Zoom, I struggled into the traditional bow tie and dinner jacket, to pay tribute to the Union for doing its duty where others have failed.

Another joy killed off by the panic…

Last week I went to the blood bank to make my twice-yearly deposit of a whole armful of gore. I mention this not to boast but because, since I started doing it 50 years ago, I have greatly enjoyed it and can’t understand why more people don’t do it.

The best bit of all nowadays is the text message telling you where and when your pint has been used, which arrives not long afterwards and provides a lovely warm glow. But it was a bit unusual, thanks to the virus panic.

I usually go in London, but for various reasons could not, and so went in Oxford. The staff, as always, were a joy, full of humour and efficiency despite having to wear face-masks (it is physically impossible to stick a needle in someone’s arm while staying 6ft away from them. Try it if you don’t believe me).

Only one thing dampened the occasion. I had that morning received a stern letter telling me that, thanks to the virus panic, I will be banned from giving blood once I reach 70, a date now alarmingly close.

This is a reversal of a previous sensible policy which allowed regular donors to keep on giving to almost any age. I do hope it does not become permanent. If I ever do reach 70, I really do not want to be protected to death.

Dismal news from the criminal justice system where – in a change of great importance – juries are no longer told they must be persuaded ‘beyond reasonable doubt’ that a defendant is guilty. They must merely be ‘sure’. These expressions do not mean the same thing. You may be ‘sure’ you want a pepperoni pizza rather than a vegan one. But the word touches a different bit of the brain from the one reached by the nagging, awkward phrase ‘beyond reasonable doubt’. There is some suggestion jurors were finding it hard to understand what ‘beyond reasonable doubt’ meant. Well, my reply to any such juror is that if you don’t know what it means, then you are not fit to sit on a jury, and should stand aside.

Let’s put lockdown in the dock

So many people were quick to go to court over the European issue, which is a far smaller matter than the current wrecking of our economy and throttling of our once-safe liberties. But, so far, there has been silence in the courts over the Government’s decision to put us all under house arrest, the first attempt in history to quarantine the healthy rather than the sick. I gather this is pretty certainly unlawful, as the 1984 Public Health Act was never designed to be used for such a wide purpose. But, if it is to be tested, a group of public-spirited citizens, helped by sympathetic lawyers, need to come together quickly to seek a Judicial Review of the shutdown in the High Court. They also need to win what is called a ‘preemptive order on costs’ to ensure the Government pays for the case, as is only right in a matter of such importance. I hope this happens. 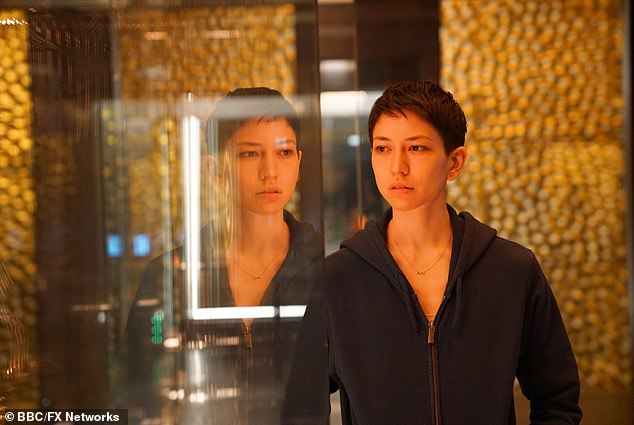 I am deeply engaged in the BBC2 series Devs, in which a secretive Silicon Valley company, apparently tinkering with the roots of the universe, is the sinister villain. This is partly due to its star, the extraordinary Sonoya Mizuno, above, a Japanese-born, British actress. But it is also because it doesn’t treat me as an idiot, which everything else on my TV (especially the so-called ‘News’) now does.