Peter Kay has announced extra dates for his already mammoth UK tour, including a ‘record-breaking’ night at London’s O2 Arena.

The comedian, 49, was moved to tears on the opening night of his first live comedy tour in 12 years last Friday, with the show being the long-anticipated first gig in a lengthy arena tour spanning December to late 2023.

Major comeback: Peter Kay has announced extra dates for his already mammoth UK tour, including a ‘record-breaking’ night at London’s O2 Arena (Peter dressed as Santa to promote the tour)

He said: ‘First of all, I want to say thanks to everyone who’s bought tickets to my tour and I really do appreciate it.

‘And we’ve finally managed to book some more extra dates.’ 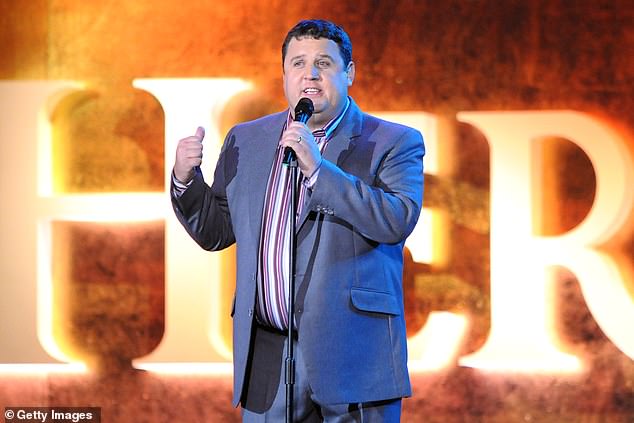 Peter said reaction to news of his tour had been ‘absolutely joyous’ and described the first shows as ‘brilliant’.

He said: ‘It’s been amazing and people deserve a bit of joy.’

The performer reminded people that he had kept price in mind, saying: ‘Don’t forget they start at 35 quid. I’ve done them cheap for the whole cost-of-living thing. So that’s £35 at 2010’s prices.’ 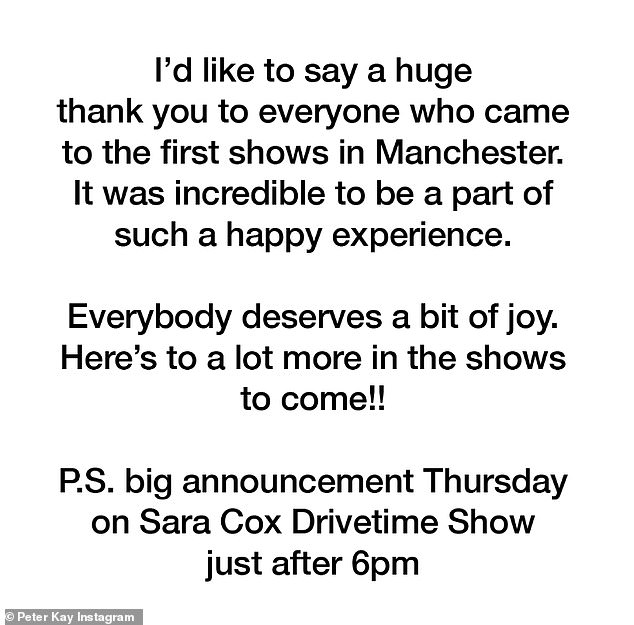 Grateful: He said: ‘First of all, I want to say thanks to everyone who’s bought tickets to my tour and I really do appreciate it’

It comes after Peter was moved to tears as he received a huge standing ovation at Manchester’s AO Arena on Friday night as he made his return to stand-up comedy.

The funnyman embarked on a mammoth 110-date tour and played to a sell-out crowd in Manchester, 16 miles from his hometown of Bolton.

As he was met with rapturous applause, chants of his name were heard ringing out across the venue, prompting him to wipe away a tear as his devotees continued to cheer. 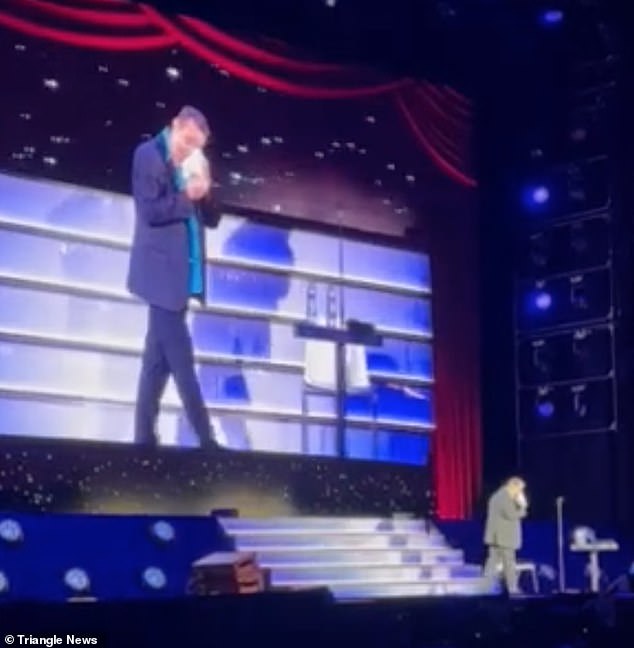 Emotional: It comes after Peter was moved to tears as he received a huge standing ovation at Manchester’s AO Arena on Friday night as he made his return to stand-up comedy

‘Aw you’ll have me in bits,’ he said. ‘Lovely Manchester you made me cry. I can’t believe I cried, where did it come from all that emotion?’

Comedian Peter has been largely absent from the public eye for the last four years and the aptly named Peter Kay Live Tour is his first live tour since 2010, when he scored the Guinness World Record for the biggest selling run of all time, playing to more than 1.2 million people.

Peter’s comeback was announced during an advertisement break in the series launch of I’m A Celebrity… Get Me Out Of Here! on ITV last month. 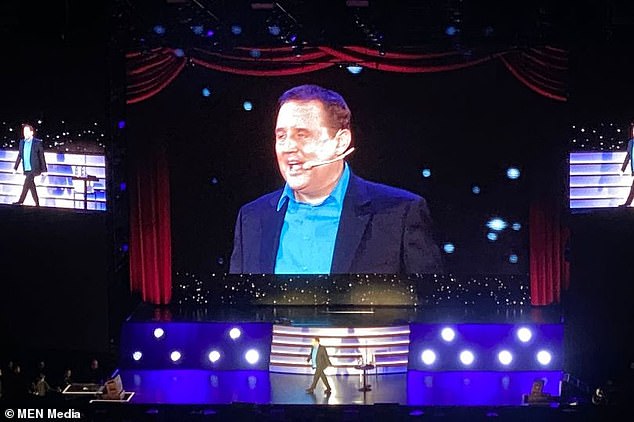 Moving: As he was met with rapturous applause, chants of his name were heard ringing out across the venue, prompting him to wipe away a tear 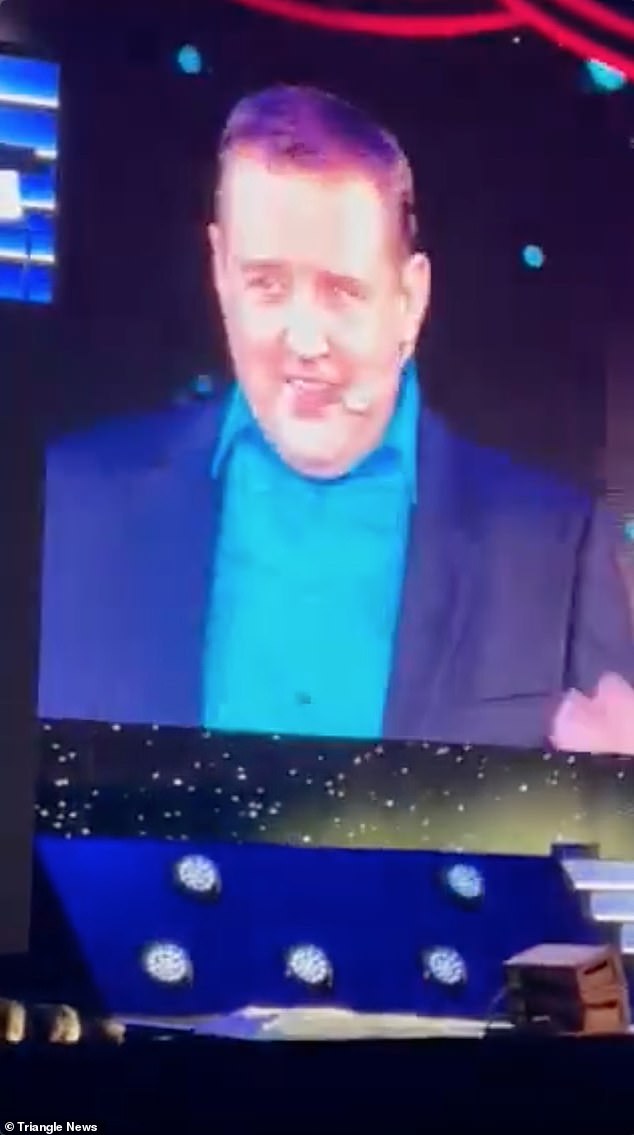 He’s back! Peter’s long-awaited return to touring comes after a 12-year break 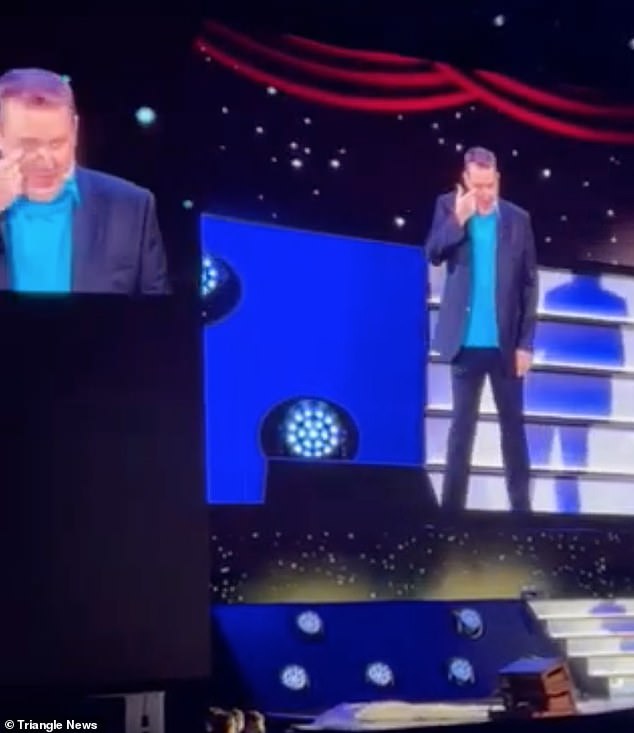 Screen star: Peter was seen crying on the large screens by the side of the stage at the arena in Manchester

He said: ‘It’s good to get back to what I love doing best, stand-up comedy, and if there’s ever a time people need a laugh it’s now.

‘And with the cost of living at an all-time high, ticket prices are starting from £35 – the same price they were on my previous tour in 2010.’

After Manchester, Peter will perform in locations including Birmingham, Liverpool, Sheffield, Belfast, Newcastle, Glasgow and Dublin. 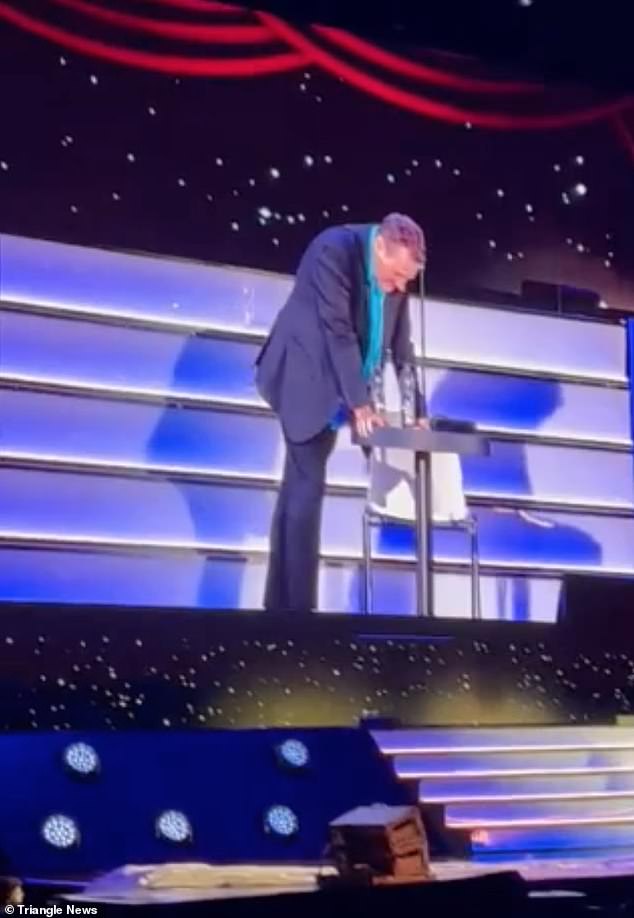 Overcome: He was seen leaning on a table while on stage as he steadied his emotions having received the positive reaction from his fans 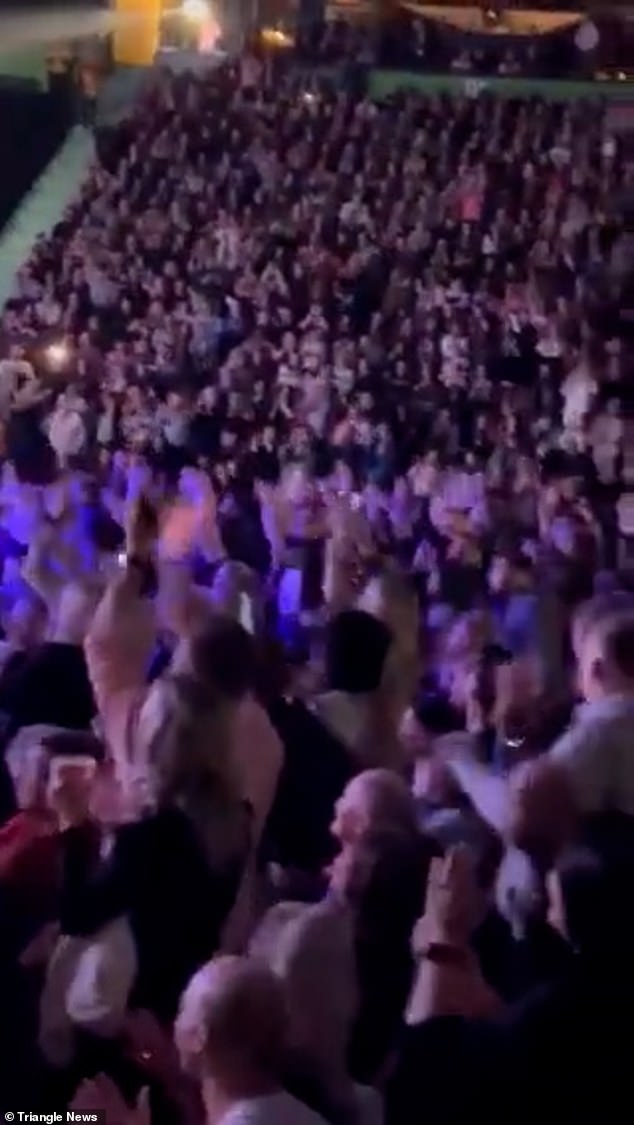 Living for the applause: The audience at Peter’s arena show were heard cheering as he arrived on stage before they chanted his name repeatedly 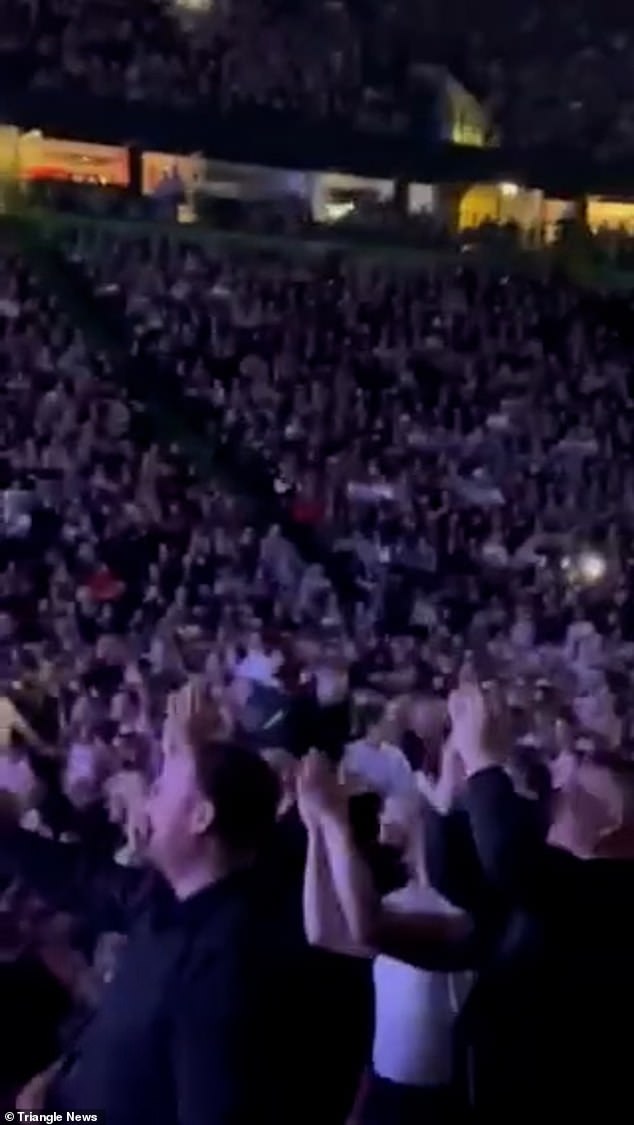 Standing ovation: The crowd were seen on their feet as they stood to give comedian Peter an extended round of applause

Not so much a comeback as a resurrection. That is certainly how it felt last night among the truest of the true believers as Peter Kay returned to the big stage in his native North West eleven years after his previous tour came to an end.

With jokes about Eighties-era adverts, crisps, grandparents, Northern comedy clubs and a smattering of smut, the phenomenally popular Bolton-born comedian launched into a new show which has already sold out venues across Britain throughout next year and beyond.

Last night’s full-house at Manchester’s 02 Arena gave him a standing ovation before he could utter a single word. Kay’s last tour, scheduled for 2017, had been cancelled due to ‘unforeseen family reasons’. I spotted one or two in tears – as was Kay himself for a few moments. ‘How am I supposed to do comedy after that?’ he exclaimed – and then did.

Fans talked of their delight at not merely getting through the lottery of the online ticketing process but also landing seats for the prized first night. ‘It was just pure luck. I had planned to aim for a later date as I thought the first night would be impossible,’ said Chris Wraight, part of a thrilled group of six from Crewe.

At the end of Peter Kay’s previous tour, which spanned 122 dates during 2010-11, Guinness World Record announced that he had set a new record for the most popular stand-up comedy tour in history – one that was watched by 1.2 million people.

Given the general reaction last night and the new schedule of gigs stretching out as far as 2025, Kay must be confident of beating his own record with this one.

Robert Hardman’s Review will be in tomorrow’s Mail on Sunday. 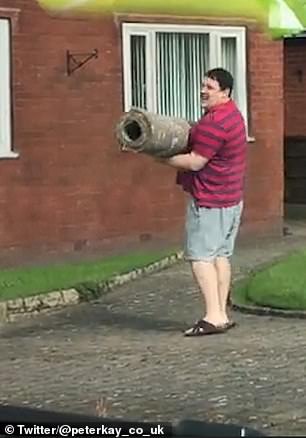 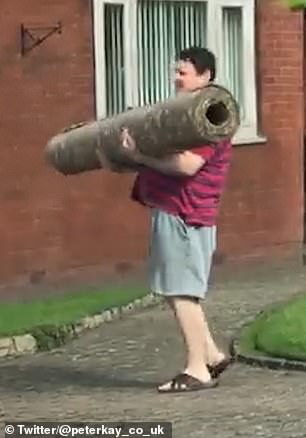 Return of the comedy king! Peter confirmed his comeback tour in an advert aired during I’m A Celebrity… Get Me Out of Here! last month (Peter is seen in the promo)

His run will end on August 11 2023 at the Sheffield Utilita Arena.

A poster for the event featured Peter holding a sign reading, ‘Better late than never’ and described a ticket to his shows as an ‘ideal Christmas gift’.

After being largely out of the spotlight for the last four years, Peter returned to the stage in August 2021 for two special charity events to raise money for Laura Nuttall, a then 20-year-old with an aggressive type of brain cancer called glioblastoma multiforme.

There was also a brief return in January 2021 when he appeared on BBC Radio 2 to chat to Cat Deeley – who was filling in after Graham Norton left the station – about his love of music, mixtapes and the musical Mamma Mia.

He also made a surprise appearance at a charity screening of his series Car Share in 2018. 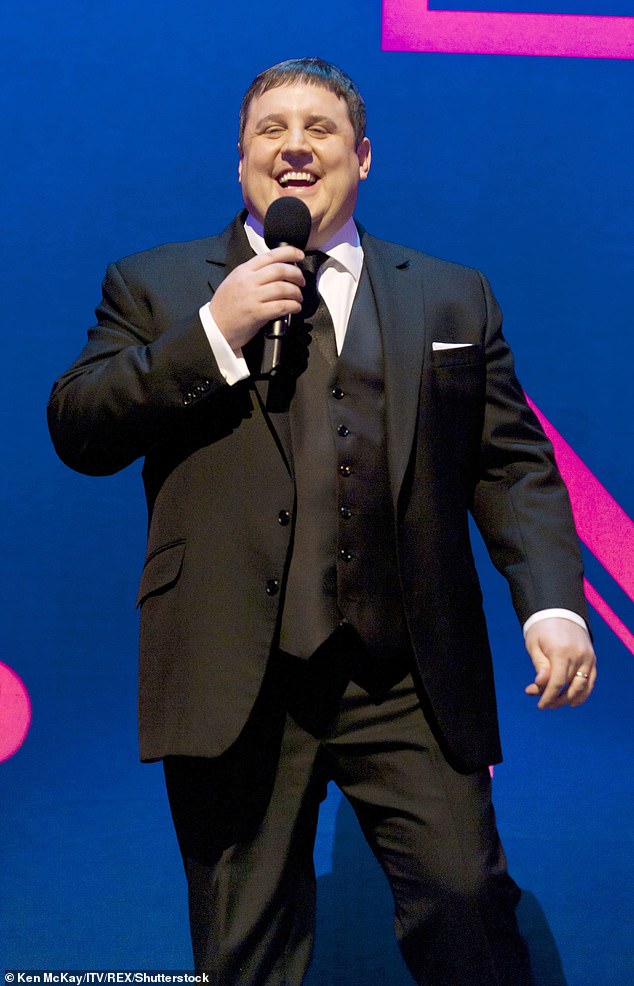 Time out: He stepped back from the public eye in 2017, when he cancelled a huge 14-month stand-up tour due to ‘unforeseen family circumstances’

The father-of-two was expected to earn up to £40million from hosting 109 nights from April 2018 until March 2019 at cities including Glasgow, Birmingham, Manchester, London and Dublin.

He said at the time: ‘Due to unforeseen family circumstances, I deeply regret that I am having to cancel all of my upcoming work projects.

He recently delighted audiences in October as he reportedly performed a ‘secret’ comedy gig for select audiences.

Peter appeared at a theatre in Salford in October and had ‘new material’ for the lucky fans who were invited to attend.

Paula, who is a fan of the comedian, took to Twitter to share her experience at the exciting ‘secret’ shows.

She penned: ‘Omg just been to a secret gig with Peter Kay at The Lowry. Best night of my life ever, that guy is a legend. Phones in locked pounces, secret ticket collection, the lot. Still buzzing.’ 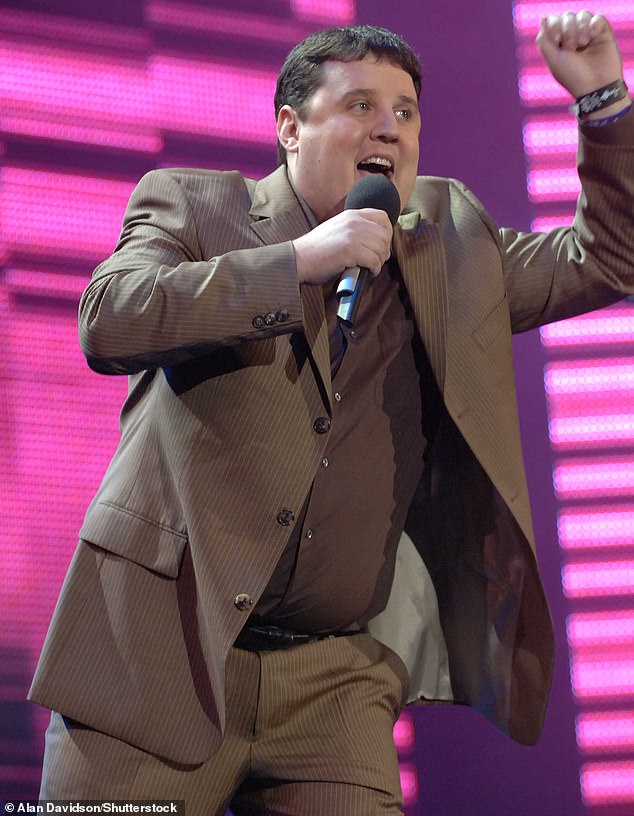 Difficult times: Fans have been waiting years for Peter’s return to the stage, after he stepped away from the spotlight in 2017 due to ‘unforeseen family circumstances’