A career criminal with a long record of violent offending has avoided jail for a vicious attack on a policeman – his third assault on an officer.

Politicians and police chiefs reacted with fury last night after smirking thug Peter McLeod, 42, was let off with a ‘slap on the wrist’.

He had told PC Andrew Jackson he would ‘chop him up with an axe’ before punching him in the face. 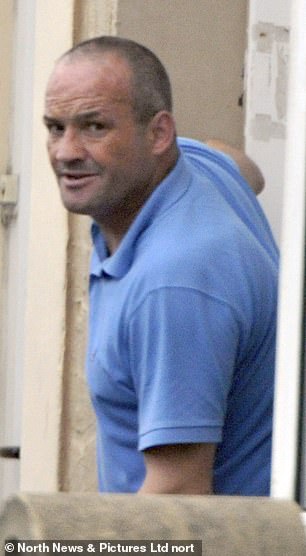 Peter McLeod, pictured, was on licence when he attacked a police officer and threatened to chop him with an axe before punching him in the face in Gateshead in August

McLeod, from Sunderland, was on licence for an axe attack on a neighbour when he assaulted the officer in Gateshead in August.

He had attacked two other officers previously, but was handed a 16-week suspended sentence after he pleaded guilty to the charge of assaulting an emergency services worker at South Tyneside Magistrates’ Court on Wednesday. McLeod was ordered to pay just £150 to his victim, who suffered ‘a number of facial injuries’.

The case comes after Home Secretary Priti Patel revealed only a quarter of criminals convicted of attacking police officers have been jailed since tough new laws were introduced.

Chris Bryant, the MP who tabled a Bill to double the punishment for those who assault officers, said the decision to let McLeod walk free was ‘sickening’.

He criticised the courts for accepting that ‘a bit of violence goes with the territory’ for police. Mr Bryant said last night: ‘If they keep on handing down sentences like this, we will completely fail our emergency services.’

Tory MP Andrew Percy added: ‘There is no doubt this thug should be behind bars. I think most decent people will be shocked he could commit such an act against a police officer and not end up in jail.’

Rory Stewart, who as justice minister brought in the new legislation to toughen up penalties, said: ‘An assault on a police officer is an assault on us all. We must stand behind our officers, because they represent the public. We must protect the protectors.’

South Tyneside Magistrates’ Court heard McLeod had 22 convictions for 66 offences, eight of which were crimes against the person. He was sentenced to 11 years in prison for grievous bodily harm after he attacked a neighbour with an axe in 2009.

He had been convicted of a stabbing in 1995 and robbery in 1998. He has several convictions for possession of offensive weapons.

His two convictions for attacks on officers took place within months of each other in 2007. The first resulted in a four-month custodial sentence and he got a community order for the second.

John Apter, of the Police Federation of England and Wales, said last night: ‘I will be asking for the sentencing guidelines to be reviewed to allow stronger sentences to be applied. We need to see an end to offenders being under-charged, or given no more than a slap on the wrist.’

Supt Helena Barron, of Northumbria Police, praised PC Jackson for ‘showing great courage despite being subjected to the vicious attack’. She said: ‘Our officers come to work to protect the communities they serve, and this case highlights the real risk they can be confronted with on a daily basis.’

Northumbria Police and Crime Commissioner, Kim McGuinness, said: ‘This is a disappointing sentence for such unacceptable behaviour. I back calls for much tougher sentences that reflect the severity of such actions.’

David Ward, for the prosecution, told magistrates at McLeod’s sentencing hearing that he had been in a vehicle stopped by police in Gateshead. When the officers said they would seize the vehicle, McLeod threatened to ‘chop them up with an axe’ and ram them.

When the officers made to arrest McLeod, he charged at them, punching PC Jackson on the jaw.

The case is the latest in a wave of violent crime against police officers nationwide. Newlywed PC Andrew Harper was killed in Sulhamstead, Berkshire, last month.

He had been responding to a report of a burglary when he was dragged along a road by a vehicle.

Earlier that month, PC Stuart Outten survived after being stabbed in the head with a machete during a routine traffic stop in Leyton, east London.

The maximum sentence judges can hand out to criminals convicted of assaults on emergency workers is now 12 months’ jail.

When someone is convicted of attacking an emergency worker – including custody officers, the fire service, search and rescue, and paramedics – the judge must consider it an aggravating factor.

There were 26,000 assaults on police officers in the year to September 2018, when the latest Bill received royal assent. 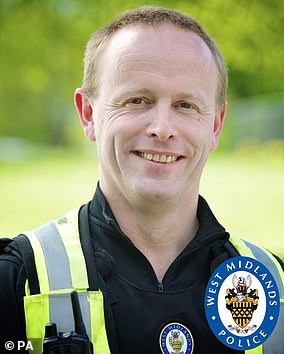 PC Christopher Burnham, 48, who is married with a ten-year-old son, has been on the force for 25 years

The neighbourhood police officer left with a fractured skull in a hit-and-run faces a ‘long road to recovery’, his force said last night.

PC Christopher Burnham, 48, who is married with a ten-year-old son, has been on the force for 25 years.

He also suffered a bleed on the brain and a shattered knee as he tried to stop a Mini on Wednesday afternoon. The driver abandoned the smashed-up hatchback a few streets away in Radford, Coventry.

Yesterday, West Midlands Police released a picture of the ‘well-regarded and proactive’ officer who has a number of commendations. Chief Supt Mike O’Hara said: ‘He was doing his job in keeping Coventry safe when he has been deliberately driven at by someone who then made off from the scene.

‘I’ve spent time with Chris and his wife in hospital today and it’s clear he now faces a long road to recovery. We will do everything possible to support him and his family through this really difficult time.’

He added that PC Burnham’s colleagues were ‘shocked and upset’.

Detectives are recovering CCTV and quizzing witnesses as they ‘work around the clock’ to track down the driver.