Every day, the road to Brexit seems to get bumpier. The mixed messages coming from Downing Street certainly don’t help.

The latest confusion was caused when, on the one hand, the Government’s Chief Whip, Julian Smith, said he plans to bring the EU (Withdrawal) Bill back to the Commons for a vote earlier than expected, in a move that pleased Brexiteers who want to face down Remain MPs as soon as possible.

However, on the other hand, Downing Street was briefing that the Government may give hope to Remainers by asking the EU for a second Brexit transition period to run until 2023.

No wonder so many of the 17.4 million who voted Leave are getting deeply frustrated.

The new prime minister, Guiseppe Conte, heads a rag-bag coalition of the anti-Establishment Five Star Movement and the far-right League

But while Brussels negotiators continue to stymie Brexit, European politicians are facing a much bigger threat to the European Union.

I refer to events of the past few days in Italy, which will be Europe’s third largest economy after Britain leaves the European Union.

This week, a new government was formed — Italy’s 66th since the end of World War II.

The new prime minister, Guiseppe Conte, heads a rag-bag coalition of the anti-Establishment Five Star Movement and the far-right League.

They agree on very little but there is one policy on which they are in harmony: a hatred of Brussels.

It is no exaggeration to say that Mr Conte, a former law professor at Florence University, has the power to bring about the collapse of the EU.

He came to power on a wave of burning national resentment over Italy’s membership of the EU, which millions of Italians believe has been an unmitigated disaster for their country.

Above all, there is the problem of immigration, which was a key issue in March’s elections.

Brussels’s freedom of movement rules are blamed for record numbers of migrants in the country.

At least one million, for example, have settled in Italy from Romania, a fellow EU member. But huge numbers have made their homes in Italy after crossing the Mediterranean from North Africa.

From Libya alone in the past four years, an estimated 600,000 migrants and refugees have reached Italy. 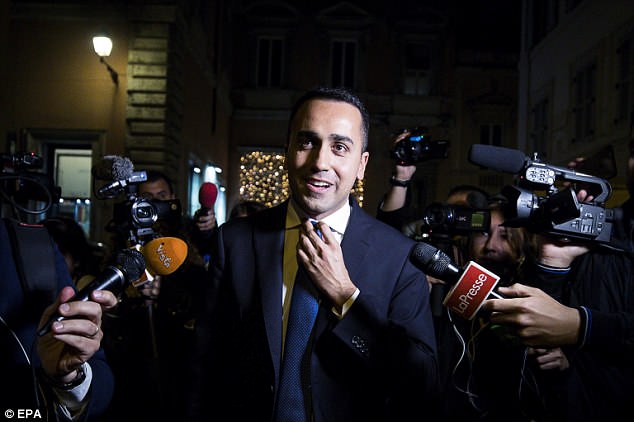 Five-Star Movement leader, Luigi Di Maio, leaves from a restaurant in the centre of Rome

These people know that once on Italian soil, they have a very good chance of being able to begin a new life there or exploit freedom of movement to live in any other of the 28 countries in the EU.

Italy’s new government has pledged to deport up to half a million migrants, to clear illegal gipsy settlements in towns and cities, and to recruit more police and build new prisons to deal with the problems.

This hardline reaction to Brussels’s soft approach to illegal immigration amounts to a huge challenge to its authority and imperils the cohesion of the EU.

But immigration is not the only issue over which Italy’s new government is at war with Brussels.

The country, once an economic success story almost as remarkable as Germany’s, has been brought to its knees by Brussels.

This tragedy dates back to Italy’s decision to join the euro at its launch in 1999. It proved to be a calamitous error.

With its own currency, the lira, the Italian government was able to manage its own affairs and devalue its currency if necessary to make itself competitive.

However, the euro has imposed a financial strait-jacket which has led to the closure of thousands of businesses, with millions of people put out of work.

Shockingly, Italy has not seen any cumulative economic growth since it signed up to the European single currency.

The Italian people know that their membership of the EU is to blame for mass unemployment, social collapse and uncontrolled migration. The new Italian PM, Mr Conte, is the first political leader to genuinely represent the national mood of outrage — and sorrow — at their post-lira impoverishment.

Italy’s national debt is a staggering 132 per cent of its Gross Domestic Product — the second highest in the EU, after Greece. 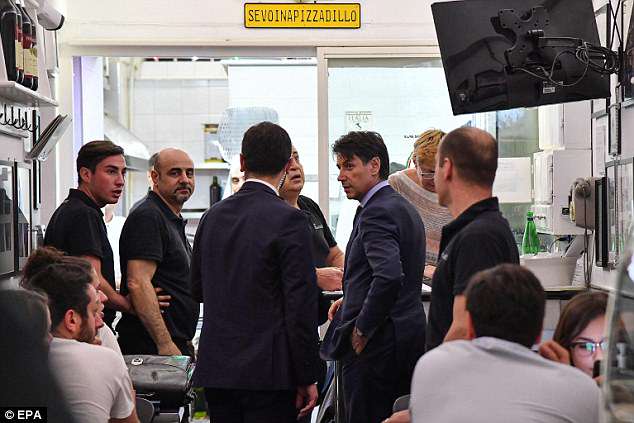 The new prime minister, Guiseppe Conte, heads a rag-bag coalition of the anti-Establishment Five Star Movement and the far-right League

To try to prevent a crisis of ever bigger proportions, the European Central Bank lent Italy €600 billion (about half a trillion pounds sterling) in order to stop it going bankrupt.

Meanwhile, Mr Conte is promising tax cuts and public spending increases to try to undo the damage to his country’s economy.

As night follows day, though, the Brussels bully-boys — the same ones who have been trying to block Brexit — will threaten him with dire consequences unless he backs down.

We witnessed a similar stand-off when Greece’s economy hit the rocks and had to be bailed out with billions of euros in loans from Brussels.

The Greek people reacted to this national humiliation by voting for a vehemently anti-EU government three years ago.

But they were then shabbily let down when their new prime minister, Alexis Tsipras, abjectly caved in to the strong-arm tactics of European leaders.

Mr Conte is unlikely to yield in the same way.

Italy is ten times bigger than Greece. Unlike Greece, Italy is too big to fail.

It is quite possible that Mr Conte will threaten that Italy will pull out of the euro — a move that would instil terror in Brussels and Frankfurt.

Returning to the lira would be a desperate measure, but it would be the economically sane thing to do.

It would give the Italian economy a chance to be competitive again and end the stagnation and mass unemployment which have wrecked countless hundreds of thousands of lives over two decades. 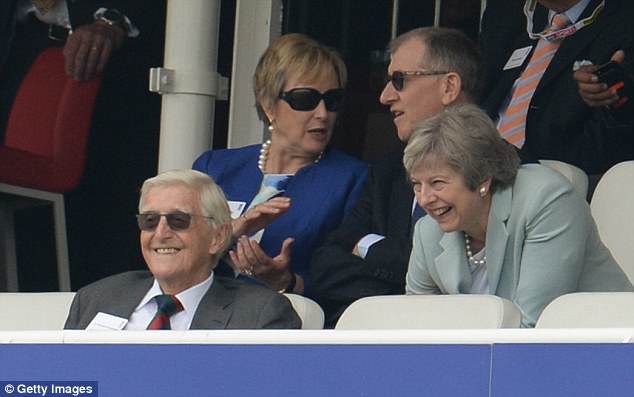 Leaving the euro would mean that Italy would renege on its €600 billion in loans from the European Central Bank.

Without doubt, the bank would collapse. The EU would go into financial and political meltdown.

The ineluctable truth is that Italy is now a ticking time bomb, and I fear it is only a question of time before it explodes, with consequences for the continent which are impossible to predict.

How ironic that the founders of the EU’s predecessor, the EEC, were driven in part by a desire to prevent a repeat of the terrible bloodshed of the two great wars of the 20th century, but their hubristic attempts at political and economic union have instead created division and hatred.

Europe is not just creaking — it is falling apart.

Is it any surprise the British people had the good sense to vote to leave the EU?

Two weeks have passed since Theresa May apologised for the Blair government’s role in the kidnap and torture of Libyan dissident Abdul Hakim Belhaj.

Mrs May was not to blame for this repugnant case. The two men most responsible were then Foreign Secretary Jack Straw and MI6 official Sir Mark Allen.

Yet Straw remains a Privy Councillor and Allen keeps his knighthood. Both men have brought shame on Britain, and if they aren’t stripped of their honours it will suggest that the British State approves of torture.

One of the fiercest critics of the Prime Minister’s handling of Brexit has been the Institute of Directors, the organisation representing Britain’s most senior business people.