PETER OBORNE: Say what you will about the Prime Minister, but there’s no questioning her tenacity

For a Prime Minister who had just gone down to the largest and most momentous parliamentary defeat in British history, Theresa May last night looked strangely calm and relaxed.

She was on her feet at the despatch box the moment the shattering news was delivered. Very brave and composed. Good for her.

Here was a very proud woman who had just suffered the total and utter destruction of everything she has fought for over the past two years.

For a Prime Minister who had just gone down to the largest and most momentous parliamentary defeat in British history, Theresa May last night looked strangely calm and relaxed

Many people would have bent over in pain and despair – and been forgiven for it. Lesser politicians would have given up months ago.

Say what you will about the Prime Minister, there is no questioning her tenacity, courage or guts.

But where now? According to most laws of politics, Mrs May should go. She cannot command a majority in the House of Commons on the flagship policy of her government.

Only three times in the past 100 years has a government endured a defeat of more than 100 votes. Mrs May lost by more than twice that – 230 votes.

And yet she spoke last night as if she intends to go on. Heroic, yes. Magnificent, certainly. Brave, beyond doubt.

Some will say she is doomed and her position is hopeless. One possibility is that Cabinet colleagues will mobilise against her overnight. That’s how Margaret Thatcher was forced out in 1990.

Her chief Cabinet ally, Chancellor Philip Hammond, made a pre-emptive bid to stop that at yesterday’s Cabinet meeting. He said: ‘Whatever happens tonight, Prime Minister, you must not resign under any circumstances.’

The rest of the Cabinet loyally banged the table in support. That was, however, before they knew the shocking scale of the Commons defeat that awaited her. 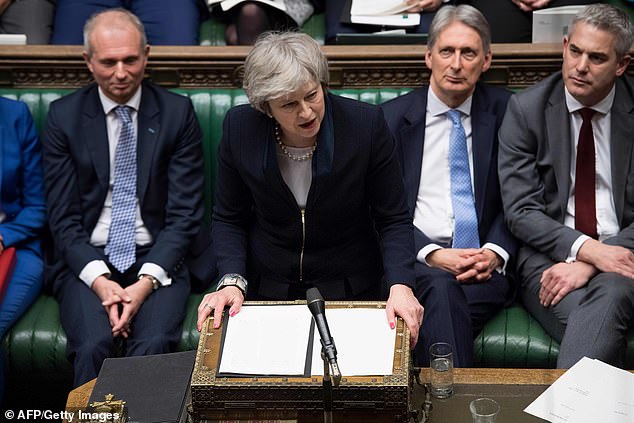 Many people would have bent over in pain and despair – and been forgiven for it. Lesser politicians would have given up months ago. Say what you will about the Prime Minister, there is no questioning her tenacity, courage or guts

For the time being she will stay and fight this afternoon’s confidence vote called by Labour – and she may well win it. Labour leader Jeremy Corbyn got the tone completely wrong in his victory speech last night.

Tory MPs, however disillusioned they are by Mrs May, will have been horrified by its crowing nature. He should have spoken in sorrow rather than anger. Instead, he spoke like a man who smells the chance of Downing Street.

If Tory MPs do rally round Mrs May as they did in the confidence motion last December. Which means that the Prime Minister can cling on. But cling on to what?

Not as walking wounded. If she survives at all, she risks resembling a political corpse. She will need to be propped up by others. And it will take more than the unimpressive Mr Hammond to save her.

But let’s turn our attention from Mrs May. Because last night was a momentous event, not just in the history of politics but in the history of our country. In many ways the fate of the Prime Minister is the least important question. 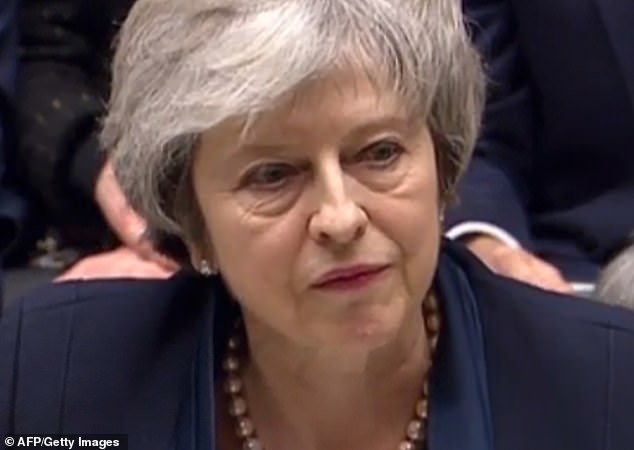 For the time being she will stay and fight this afternoon’s confidence vote called by Labour – and she may well win it. Labour leader Jeremy Corbyn got the tone completely wrong in his victory speech last night

First to the Conservative Party, which in theory she still leads. Last night marked the moment the Tory Party split. The Brexit rebels scent blood, and from now on they will fight without mercy or remorse for their vision of a no-deal Brexit.

That means open war between them and the rest of the party. A hard core of the Brexit rebels, who voted in such numbers against Mrs May, are now set on securing their objective no matter what.

Equally, a hard core of Remainer wing of the party will stop at nothing to stop them.

For the past 30 years, there’s been a long and bitter Tory war over Europe. That war will now reach its ugly conclusion.

And with so much at stake I don’t believe that Jacob Rees-Mogg or John Redwood can any longer stay in the same party as Michael Heseltine or Anna Soubry.

Make no mistake, if Mrs May attempts to stay on and arbitrate between the party’s two factions, her Conservative foes will try to hunt her down like a wild animal.

In my view, her best chance of survival is to take sides with the Brexiteers. There were some indications last night that in a desperate attempt to rescue her premiership she was trying to do just that.

But does Mrs May really want to become their hostage? How undignified an end to a distinguished career.

A general election is now a real possibility. But the war-torn Tories are in a poor state to fight one. They would be fighting with one another.

We now need to take on board the real possibility that the 200-year history of the Tory Party finished last night.

The only way to navigate out of this chaos is for the Tories to talk to Labour. Mrs May, a tribal Tory, isn’t the most obvious candidate to do that.

Over the next few weeks David Lidington, her deputy, will be the real prime minister. No one will announce it. Few British voters know who he is.

But he’ll be the one who sits down face to face with Jeremy Corbyn, acting behind the scenes, and trying to make sense of the havoc which now engulfs British politics.

And Labour will talk to him – and whether we like it or not, Mr Corbyn, as much as Mrs May, now holds the key to whether Brexit takes place.

But let’s not forget, the Labour leader has huge problems too. Mr Corbyn supports Brexit while the majority of his MPs – and Labour voters – are against. Like Mrs May, he may be washed away by events as civil war breaks out in his party.

Brexit has become the gravest political crisis of our lifetimes. I hoped that Mrs May’s deal would go through last night. Instead, all outcomes are now possible. No-deal Brexit and economic catastrophe.

A general election. A much softer Brexit. At the very least it now looks probably that Article 50 will be delayed.

Mrs May will want to carry on. It’s in her character. But her husband Philip – such a tower of strength and what a decent man – may gently take her aside and tell her that while she’s done her best, her time is up.

She has taken one monster pummelling after another. The rebuffs from Europe. The treachery of her Cabinet. The defeats in Parliament.

No professional boxer has taken such a beating and come back for more.

If she did choose to retire she could do so with pride, even with honour. She has done her best. Her deal, I believed, was the best for Britain.

If the outcome of last night’s devastating defeat is that it is not to be, then others must deal with the terrifying consequences.