LANDOVER, Md. (AP) – Adrian Peterson ran for 120 yards and a pair of 2-yard scores, Alex Smith threw two touchdown passes – all in the first half Sunday – and the Washington Redskins held on for a 31-17 victory over a gimpy Aaron Rodgers and the Green Bay Packers, who again had complaints about a roughing-the-passer penalty on Clay Matthews.

Smith connected for TDs of 46 yards to Paul Richardson on the game’s fourth play and of 9 to Jamison Crowder in the second quarter.

Washington Redskins running back Adrian Peterson (26) carries the ball into the end zone for a touchdown during the first half of an NFL football game against the Green Bay Packers, Sunday, Sept. 23, 2018, in Landover, Md. (AP Photo/Alex Brandon)

Peterson, who ran 19 times Sunday, raised his career total to 102 rushing touchdowns, breaking a tie at 100 with Marshall Faulk and Shaun Alexander and moving him alone into seventh place in NFL history behind Emmitt Smith’s record of 164.

This was Peterson’s 52nd game with at least 100 yards on the ground, and first since Nov. 5, 2017, for Arizona against San Francisco.

Playing with a bulky brace on his left knee, which he hurt in Week 1, Rodgers hobbled and limped around, and couldn’t do enough to get the Packers (1-1-1) back into the game.

He finished 27 for 44 for 265 yards with two TDs – of 64 yards to Geronimo Allison and 2 yards to Davante Adams – and was sacked four times.

But Green Bay’s receivers had problems with drops, plus Randall Cobb was stripped of the ball by Fabian Moreau – Josh Norman recovered the fumble – after a completion with about 5½ minutes remaining in the fourth quarter.

In the third, Packers linebacker Matthews was flagged for roughing Smith – and there are sure to be more questions about what constitutes a penalty on such plays. Matthews broke in alone on Smith, wrapped him and brought him down. Matthews immediately put his arms up and slapped himself in the helmet as the flag was thrown.

Packers coach Mike McCarthy threw down a play-calling sheet and argued with two officials about the call, even chasing one along the sideline as he backpedaled away.

In Green Bay’s 29-all tie against the Minnesota Vikings last week, a potentially win-sealing interception for the Packers was wiped out by a roughing call on Matthews when he hit Kirk Cousins.

On Sunday, Smith went 12 for 20 for 220 yards. He also had his streak of 156 consecutive passes without an interception, the longest active run in the NFL, end in the second quarter. Safety Ha Ha Clinton-Dix made the pick when tight end Jordan Reed went one way and Smith threw another.

That was one of many times when loud cheers of “Go, Pack, go!” rang through the Redskins’ stadium. Last week, Washington’s home sellout streak ended and there were plenty of boos heard during a 21-9 loss to the Indianapolis Colts.

Packers: DL Muhammad Wilkerson was carted off in the second quarter with an ankle injury. … RT Bryan Bulaga left with a back injury. Jason Spriggs replaced him.

Redskins: RT Morgan Moses exited in the first quarter with a concussion. He was replaced by Ty Nsekhe. 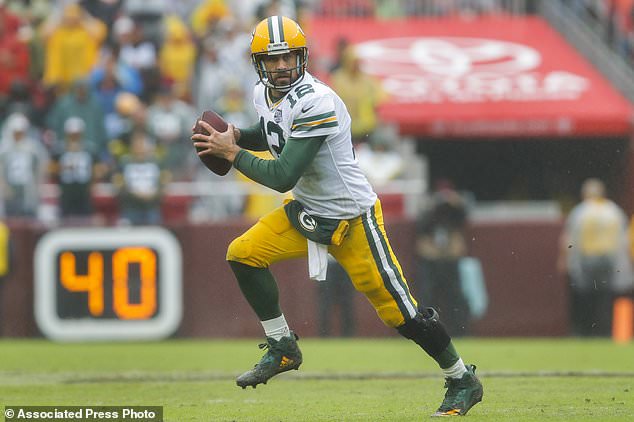 Green Bay Packers quarterback Aaron Rodgers (12), wearing a knee brace, scrambles with the ball during the second half of an NFL football game against the Washington Redskins, Sunday, Sept. 23, 2018 in Landover, Md. (AP Photo/Carolyn Kaster) 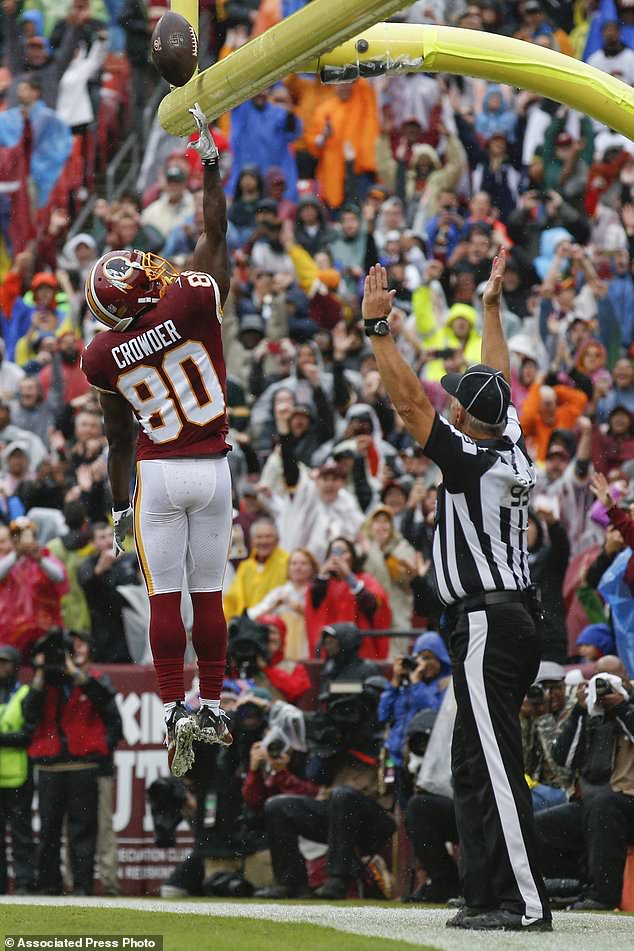 Washington Redskins wide receiver Jamison Crowder (80) tips the ball over the goalposts as he celebrates his touchdown during the first half of an NFL football game against the Green Bay Packers, Sunday, Sept. 23, 2018, in Landover, Md. (AP Photo/Alex Brandon) 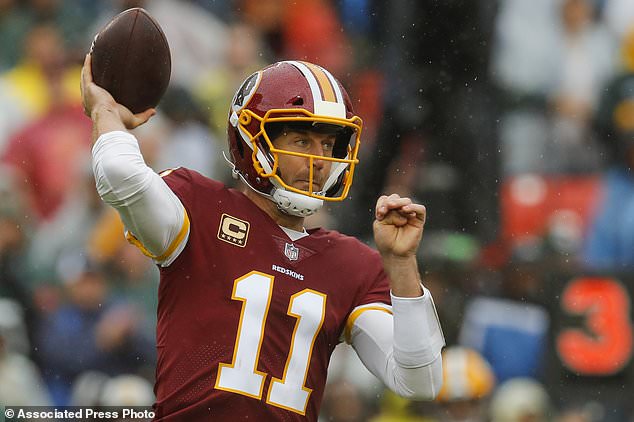 Washington Redskins quarterback Alex Smith (11) passes the ball during the first half of an NFL football game against the Green Bay Packers, Sunday, Sept. 23, 2018, in Landover, Md. (AP Photo/Carolyn Kaster) 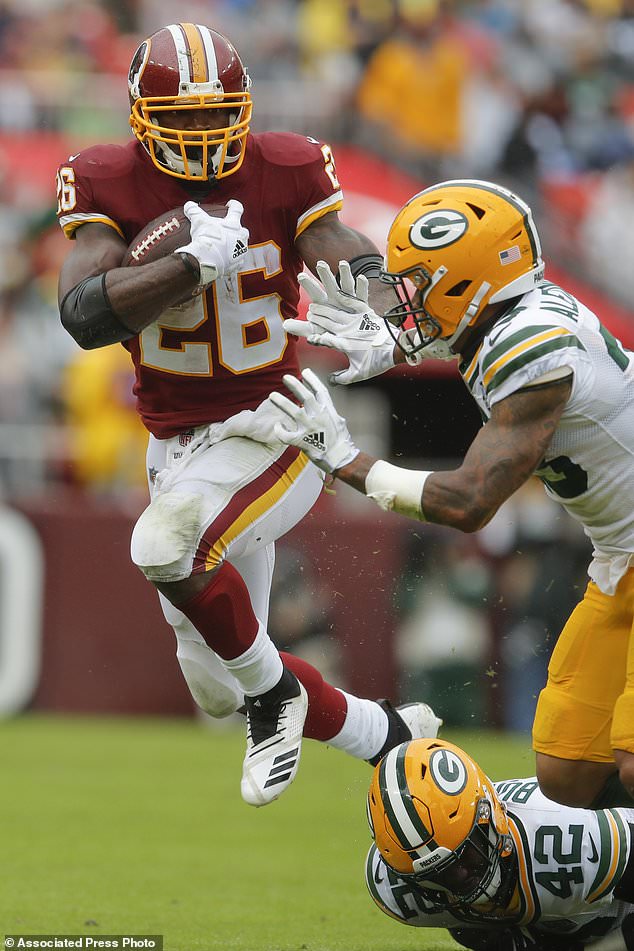 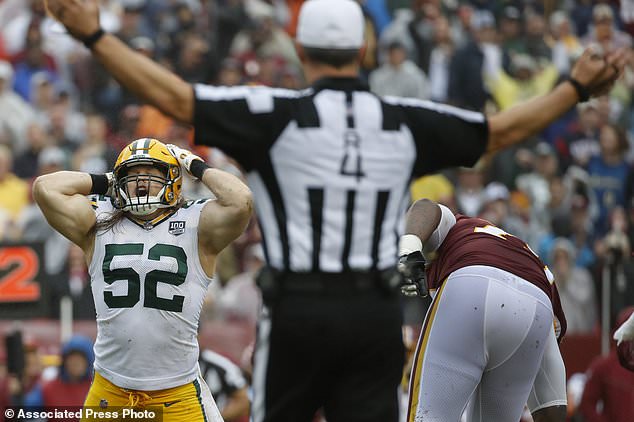