Petrol prices in Britain: June was a record month for rises

The nation’s motorists endured another month of record petrol price increases in June, it has been confirmed this morning.

The surge in prices added more than £9 to the cost of filling a typical 55-litre family petrol car over the course of the month, the motoring group said as it called for a ‘clear package of financial support’ for the nation’s hard-pressed drivers.

The 16.6p increase in the UK average price of petrol in June is the biggest monthly jump on record. However, the cost of fuel has started to gradually decline this month…

The RAC said higher pump prices were expected at the start of June due to the cost of oil rising in response to increased demand and continued supply concerns relating to the war in Ukraine.

However, the wholesale price of fuel – petrol in particular – has been in decline for five consecutive weeks – though the industry failed to pass on any of these savings at the pumps, instead gradually putting them up on a daily basis.

This has seen retailers double their profit margins in June from a long-term average of around 6p-a-litre to 12p last month, the RAC calculated.

‘The rate at which pump prices have been rising over the last four weeks is hard to comprehend,’ the organisation’s fuel spokesman Simon Williams said.

‘Not a day in June went by when petrol prices didn’t go up, even though the price retailers pay to buy in fuel went down.

‘There’s no doubt that drivers are getting an incredibly raw deal at the pumps at a time when the cost-of-living crisis is being felt ever more acutely.’

New figures published this morning suggest a modicum of respite for drivers, with prices of both fuels falling for the first time in 11 weeks.

More than a month after wholesale petrol prices started to drop, after the Jubilee bank holiday, petrol fell by 0.3p-a-litre on Monday and remained below Sunday’s record high yesterday, the AA confirmed. 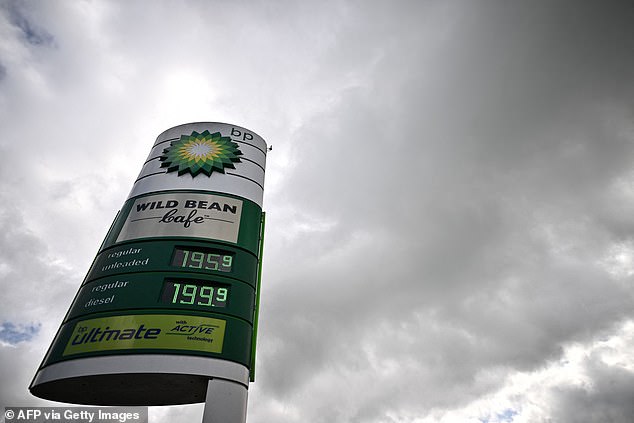 When comparing the cost of filling up an average family car in June 2021, drivers are having to fork out an extra £33.50 each time they brim a near-empty fuel tank, the figures show

Luke Bosdet, the AA’s fuel price spokesman, said the decline was the ‘first piece of good news in this cost of living crisis’ but added that ‘reductions should be much bigger and should have started last week if not sooner’.

He went on: ‘The question now is how much of the potential saving will be passed on to the consumer.

‘As usual, the fuel trade shows itself very reluctant to pass on lower costs and give relief to hard-pressed motorists.’

For the average diesel-powered Transit-style van with an 80-litre fuel tank, the cost of filling up at the end of last month was a staggering £159.28 on average.

The RAC adds that the average price of petrol is up 27p per litre and diesel higher by 21p since Rishi Sunak – the now-former Chancellor – implemented 5p cut in fuel duty in March.

This week, protestors have taken to motorways and other major routes calling for further cuts to be made to ease the financial burden of filling up.

Twelve people were arrested on Monday as dozens of campaigners calling for more government intervention targeted the M4 in South Wales and Somerset, and stretches of the M5 from Devon to Bristol, with rolling go-slow roadblocks in the morning rush-hour.

Home Secretary Priti Patel called on police to use new powers which include imprisonment to stop fuel protesters bringing gridlock to major roads.

‘The silence from the Treasury when it comes to supporting drivers through this time of record high pump prices is, frankly, deafening,’ Mr Williams added.

What are fuel prices so high? 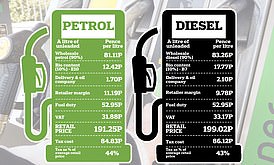 Read our latest report on what has triggered the staggering increase in the cost of petrol and diesel, and explain why prices are yet to fall significantly.

‘Perhaps it has something do with the fact that it’s benefiting significantly from the increased VAT revenue caused by the high prices.

‘We badly need the Government to go beyond just vague words and instead actually implement a clear package of financial support to show they’re on the side of drivers.’

Labour’s shadow transport secretary Louise Haigh said: ‘This hapless Conservative Government is so mired in scandal and chaos that it has no answers to the savage price hikes facing working people during a cost-of-living crisis.

‘The Tories need to act urgently and tackle the profiteering of petrol giants, and ensure retailers pass on fuel duty cuts to consumers, to put money back in people’s pockets.’