Pfizer kicks off 30,000-person trial for its coronavirus vaccine

German biotech BioNTech and US drugmaker Pfizer said on Monday they are launching a pivotal global study to evaluate their lead COVID-19 vaccine candidate.

If the study is successful, the companies could submit the vaccine for regulatory approval as early as October, putting them on track to supply up to 100 million doses by the end of 2020 and 1.3 billion by the end of 2021.

Pfizer last year agreed to provide the US with 100 million doses of its potential coronavirus vaccine for $1.95 billion.

Patients are each given two doses of the drugmakers’ vaccine to help boost immunity, so the first 100 million doses would vaccinate around 50 million people.

The study is expected to include about 120 sites globally and could include up to 30,000 participants. It will include regions heavily impacted by COVID-19.

‘The initiation of the Phase 2/3 trial is a major step forward in our progress toward providing a potential vaccine to help fight the ongoing COVID-19 pandemic,’ said Kathrin Jansen, head of vaccine research and development at Pfizer.

Pfizer announced the launch of its phase 2/3 trial for its coronavirus vaccine late on Monday. The trial is set to enroll 30,000 people and put the shot’s ability to prevent infection to the test

The trial homes in on Pfizer’s most promising vaccine candidate, which it calls BNT162b2. Earlier studies filtered out other potential vaccines.

Shares for Pfizer rose nearly two percent  following the announcement, which was made after the bell.

Pfizer has already has an agreement to sell 100 million doses of its vaccine to the US government and give it the option to buy 500 million more.

It is in talks with other governments, including the European Union, about similar deals.

The $1.95 billion deal will cover those first 100 million doses, but it’s not clear what the unit price of the drug will be, or how much Pfizer will charge governments, including the US, after providing the products specified by their agreements.

AstraZeneca, the British drugmaker, which also has a nearly $2 billion contract to provide the US government with its potential vaccine has promised that it will sell its shot at a non-profit price. 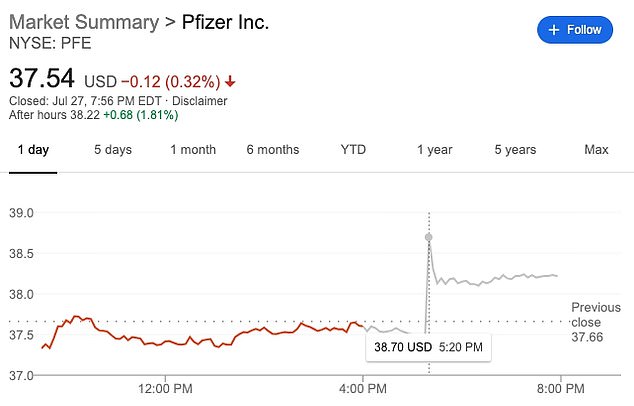 The announcement came after trading closed for the day, but triggered a 1.81% rise in shares for Pfizer 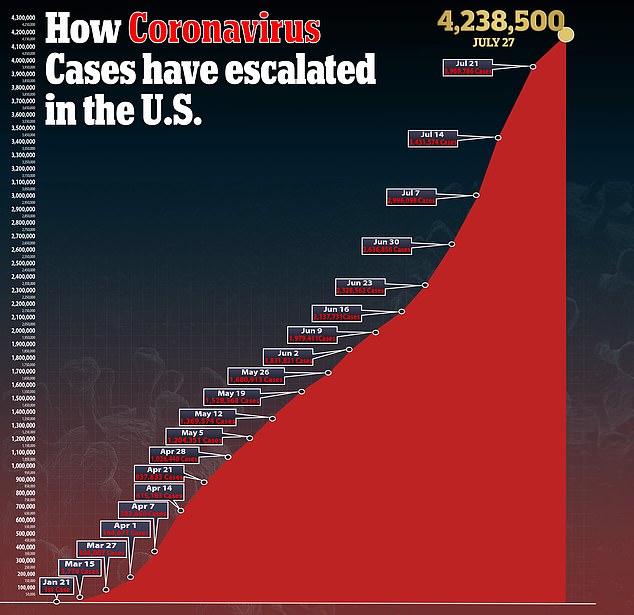 Pfizer has made no such commitment, but its executives have stated that they believe a COVID-19 preventive shot should be free to the public (prices paid by governments or companies, ostensibly notwithstanding).

Over 150 vaccines are being developed against COVID-19, which has claimed nearly 650,000 lives globally and crippled economies.

Vaccines made by five companies – Pfizer, AstraZeneca, Moderna, Johnson & Johnson and Merck – have been cherry picked by the Trump administration’s Operation Warp Speed initiative as the most promising candidates for the US.

Although they all aim to prevent coronavirus infection, the various vaccines employ different technologies to that end.

Pfizer’s vaccine utilizes chemical messenger RNA to mimic the surface of the coronavirus and teach the immune system to recognize and neutralize it. Although the technology has been around for years, there has never been an approved messenger RNA (mRNA)vaccine.

Moderna also launched an advanced stage trial with 30,000 participants on Monday, with the first volunteers getting dosed at a handful of the trial’s seven dozen sites, including Savannah, Georgia, and New York.

Co-founder and chairman of Moderna, Noubar Afeyan, said he thought they trial could reveal whether the shot is protective as early as the end of this year.

In terms of timeline, Moderna has been ahead of the pack of US firms since the pandemic’s earliest days, trailing only AstraZeneca globally.