A third dose of the Pfizer-BioNTech COVID-19 vaccine could offer strong protection against the Indian ‘Delta’ variant, data reveals, as a separate study finds protection provided by the vaccine could wane after six months.

New data released by the company on Wednesday showed antibody levels increased five-fold among people ages 18 to 55 who were given the booster shot.

The third dose was especially effecting for the elderly, with antibody levels spiking 11-fold among people aged 65 to 85 who had already received the standard two doses.

In the slides published online, the researchers wrote there there is ‘estimated potential for up to 100-fold increase in Delta neutralization post-dose three compared to pre-dose three.’

The new data come at a welcome time with separate pre-print research finding that the efficacy of the Pfizer vaccine falls from 96 percent to only 84 percent after six months.

The Delta variant continues to spread across the country, making up at least 83 percent of all new infections.

Pfizer produces the most commonly used vaccine in the U.S., having been administered over 190 million times, according to data from the Centers for Disease Control and Prevention (CDC).

Early adopters of the vaccine may soon has their immunity to the virus slightly diminished.

Research, which has not been peer-reviewed, led by Pfizer and Syracuse University in New York finds that the vaccine was 91 percent effective in preventing the virus for six months.

After the time-span, the efficacy slightly falls to only 84 percent.

If it continues to drop at that rate, researchers say, the vaccine could drop below 50 percent efficacy 18 months after administration.

Those who are fully vaccinated and contract COVID are still less likely to experience serious symptoms or hospitalization, though.

Pfizer’s vaccine was first given emergency use authorization by the U.S. Food and Drug Administration in December, and was first distributed to priority populations like the elderly and health care workers that month.

Those who received the vaccine first may have already had its efficacy drop, meaning a third dose could be required soon.

The company plans to submit its application for emergency use authorization for the third dose to the FDA as early as August, according to slides distributed before an earnings call.

Clinical studies on a Delta variant-specific vaccine may begin soon as well.

Pending regulatory approval, the company plans to kick off trials in August, and has even already produced the first batch of the vaccine to be used.

Rumbles about the potential for a third dose in the near future have been happening for months.

Dr Anthony Fauci, director of the National Institute of Allergy and Infectious Diseases, has said in the past that he expects a third dose to be needed in the coming months.

Though, he said earlier this month that he does not expect booster shots to be needed for the fully vaccinated at this time.

Fauci said earlier this week, though, that those who are vulnerable to the virus even after vaccination still may require a third dose.

Some elderly people, and people with conditions like cancer or who have received an organ transplant, are found to have not developed the sane antibody levels as others post vaccine. 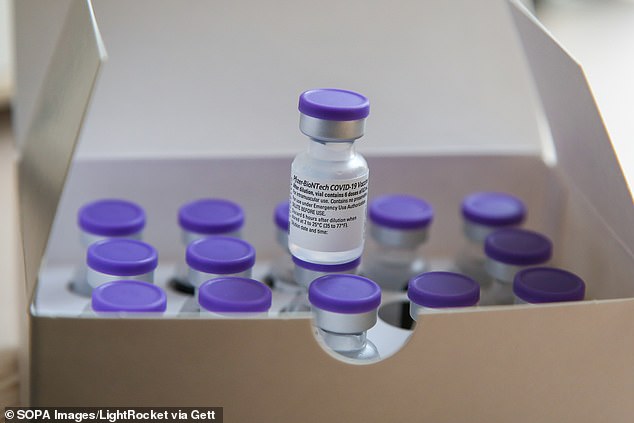 Pfizer is also working on a vaccine specific to combatting the Delta COVID-19 variant, according to documents distributed as part of their earnings call

The Delta variant has also shown a rare ability to cause breakthrough cases among fully vaccinated people.

The ability to cause breakthrough cases was cited by the Centers for Disease Control and Prevention as the reason for the reintroduction of masks for fully vaccinated people in some parts of the country.

If Pfizer’s findings – which are not peer-reviewed – are correct, then the third dose could be a valuable tool in combatting the variant.

The company’s findings also found that a third dose could be particularly effective in combating the South African Beta variant.

The variant accounts for less than 10 percent of active cases in the United States.

Pfizer also revealed on the earnings call that they are working on a flu vaccine that uses the same mRNA technology used to develop its COVID vaccine.

Moderna, who also developed an mRNA COVID vaccine, began trials of an mRNA flu vaccine at the start of the month.