Two doses of the vaccine prevent 80 per cent of people from catching coronavirus after one month, according to Qatari researchers.

The findings — based on an analysis of nearly one million people — mirror efficacy estimates pumped out by British health chiefs.

But the study showed protection gradually wanes, plunging to just 22.3 per cent after six months among fully-vaccinated people.

Yet, scientists insist protection against severe illness and death remains high after half a year, sitting at around the 90 per cent mark.

Amid fears vaccine-induced immunity may wane after several months, UK ministers have began a booster drive. Some 30million over-50s and NHS workers will be eligible for a third dose, six months after their second.

But they opted to push ahead with the booster rollout to keep immunity levels high among the most vulnerable in the winter.

Two doses of the vaccine prevent 80 per cent of people from catching coronavirus after one month, according to Qatari researchers

The jabs were administered in a similar order to the UK, starting with health workers, adults with underlying health conditions and over-70s, before working down the age groups.

As of September 7, at least 90 per cent of over-12s had received at least one Covid vaccine, while 80 per cent were double-jabbed.

Researchers estimated the country — located in the Persian Gulf — has the ‘highest mRNA vaccine coverage worldwide’.

Qatar has battled two back-to-back waves of Covid between January and June this year, fuelled by the Alpha and Beta strains.

The Delta variant began spreading in March and it became dominant a few months later. But despite high vaccine coverage, infection rates increased slowly from July to August.

The team gathered data on positive PCR tests to estimate the effectiveness of the vaccines. Around five per cent of the population are tested every week 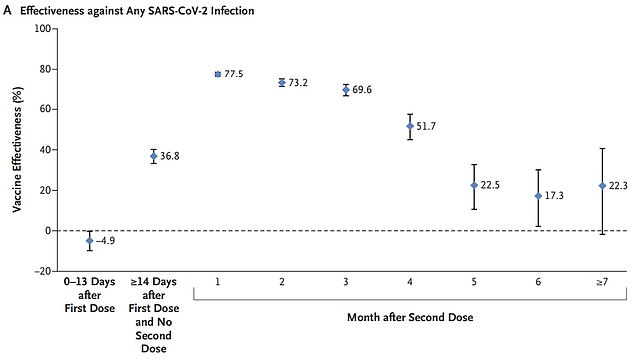 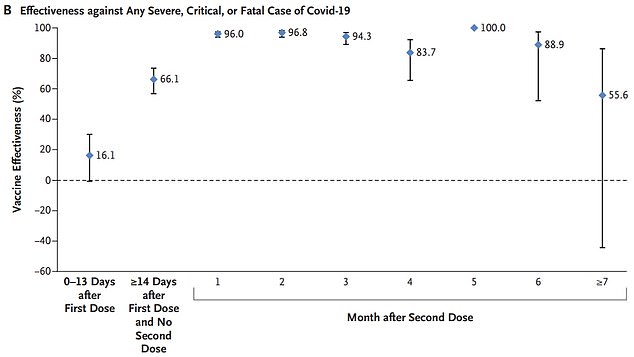 However, the vaccine was much stronger at preventing severe or fatal Covid cases. Three weeks after the first dose, the jab was 66.1 per cent effective, rising to 96 per cent or higher within two months after the second dose. And this high level of protection lasted for around six months

Britain’s downturn in Covid cases may have come to an end, official figures suggested today as daily infections rose for the first time in a week.

Hospitalisations also increased 1.1 per cent to 666 on Saturday, the latest date data is available for. It was the first time in 20 days the number of daily admissions had increased week-on-week.

But the number of people dying within 28 days of a positive test has continued to fall, with 143 fatalities recorded today. Deaths were down 4.7 per cent on the 150 recorded last Wednesday, marking the twelfth day in a row the number of victims fell week-on-week.

It comes after separate official figures today revealed nearly a fifth of people in Blackburn have tested positive for Covid since the pandemic began.

The Lancashire authority has been the worst hit area in the UK, recording 12 times more cases per population size than the least affected parts of the UK. Department of Health data shows around 19,000 per 100,000 people in Blackburn have had the virus since March 2020, compared to just 1,500 in the Orkney Islands in Scotland.

To understand how effective the Pfizer jab was at preventing infection, severe illness and death, Weill Cornell Medicine researchers tracked the shape of the outbreak.

Some 947,035 people received at least one Pfizer vaccine by September 5, of which 96 per cent were double-jabbed.

An additional 564,196 people had had at least one dose of Moderna, of which 88 per cent had both. But this group was not included in the study.

Some 8,203 infections were spotted among people who received one dose of Pfizer, while 10,543 infections occurred among double-jabbed people.

By the end of August, 377 people who had one dose of Pfizer were hospitalised, 32 went to ICU and 34 died from the virus.

Meanwhile, 106 people double-jabbed with Pfizer were hospitalised with the virus, 10 were admitted to ICU and 15 died from the virus.

The researchers used this data to estimate Pfizer’s effectiveness.

The injection is only 36.8 per cent effective at preventing infection two weeks after getting a first dose.

This rises to 77.5 per cent a month after the second dose, the team wrote in a study published in the New England Journal of Medicine.

But protection against catching the virus then drops for four months and then falls quickly to 20 per cent around five to seven months after the second jab.

The experts said their findings apply to the Alpha, Beta and Delta variants because a ‘similar pattern of waning’ protection was spotted regardless of which strain caused the infection.

They said the findings suggest ‘a large proportion of the vaccinated population could lose its protection against infection in the coming months, perhaps increasing the potential for new epidemic waves’.

However, the vaccine was much stronger at preventing severe or fatal Covid cases. 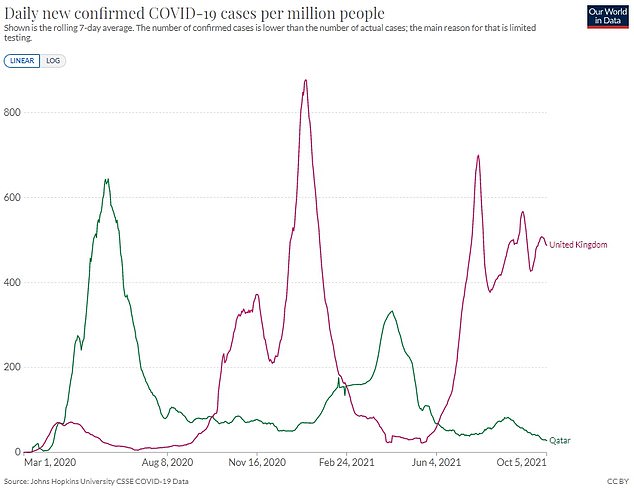 Qatar (green line) has battled two back-to-back between January and June this year, fuelled by the Alpha and Beta strains. The Delta variant began spreading in March and became dominant a few months later. Meanwhile, the UK has suffered three waves of infection so far, the worst of which peaked last winter

The proportion of infections among vaccinated people increased over time and reached 36.4 per cent on September 5. The majority of breakthrough cases (77.2 per cent) were spotted among Pfizer recipients, rather than those jabbed with Moderna

Three weeks after the first dose, the jab was 66.1 per cent effective, rising to 96 per cent or higher within two months after the second dose.

Data shows protection against severe infection and death dropped to 55.6 per cent  at month seven, but due to the small number of cases there is a high margin of error around the figure.

And the researchers said there was only a ‘hint of a decline’.

The researchers wrote: ‘No evidence was found for an appreciable waning of protection against hospitalisation and death, which remained robust — generally at 90 per cent or higher — for six months after the second dose.

‘Implications of these findings on infection transmission remain to be clarified, but vaccine breakthrough infections were found recently, in this same population, to be less infectious than primary infections in unvaccinated persons.’

However, the researchers noted that Qatar has a young population, with just nine per cent of people being aged 50 and older, so the findings may not apply to countries with older populations.

And they only dished out jabs with a three-week gap, while Britain administered vaccines with an eight to 12-week gap after studies showed this to be more effective.