‘Pharma Bro’ Martin Shkreli was denied early release from prison after he pleaded with a judge to free him so he could work on a cure for COVID-19.

On Saturday, Judge Kiyo Matsumoto of New York City rejected a bid from Shkreli, 37, to be released amid the coronavirus pandemic.

He first asked for a three-month release in April so he could assemble a team to solve the coronavirus, which has killed 1,500,670 Americans and killed 89,563.

‘The court does not find that releasing Mr. Shkreli will protect the public, even though Mr. Shkreli seeks to leverage his experience with pharmaceuticals to help develop a cure for Covid-19 that he would purportedly provide at no cost,’ an order read, according to Blooomberg.

TMZ reports that court documents also said Shkreli’s intentions to discover a cure that has ‘so far eluded the best medical and scientific minds in the world working around the clock’ is exactly the type of ‘delusional self-aggrandizing behavior’ he exhibited before his 2018 conviction.

At the time, Shkreli claimed that his motivations weren’t driven by greed and that being a ‘successful two-time biopharma entrepreneur’ made him uniquely qualified to help.

Matsumoto also did not believe Shkreli’s claims that he his allergies and asthma made him more susceptible to the coronavirus. 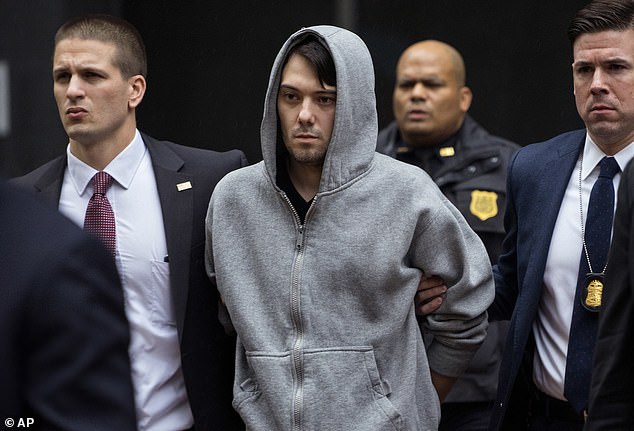 She wrote that Shkreli was overall healthy and had not pre-existing conditions that would put him at a higher risk for the virus.

Additionally, FCI Allenwood Low, the prison Shkreli is staying in, has no reported instances of coronavirus infections or deaths.

The Federal Bureau of Prisons reports that 2,280 federal inmates and 283 have tested positive for the coronavirus.

Of the ruling Shkreli’s attorney said he’s ‘not surprised but very disappointed.’

‘Notorious defendant never catches a break even when well deserved and in the best interest of the country.’

In April, Shkreli blasted the current handling of the coronavirus pandemic and called it ‘inadequate.’

‘The industry response to COVID-19 is inadequate. All biopharmaceutical companies should be responding with all resources to combat this health emergency. Donations from these very valuable companies do not go far enough,’ he writes in a statement.

‘The biopharmaceutical industry has a large braintrust of talent that is not working on this problem as companies have deprioritized or even abandoned infectious disease research.

‘Medicinal chemists, structural biologists, enzymologists and assay development and research biology departments at EVERY pharmaceutical company should be put to work until COVID-19 is no more.’ 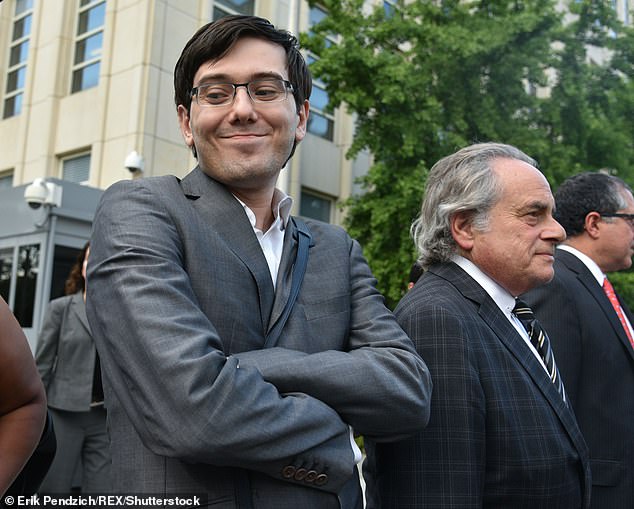 Shkreli (pictured): ‘All biopharmaceutical companies should be responding with all resources to combat this health emergency’

Shkreli was sentenced to seven years in federal prison in March 2018 for securities fraud for lying to investors in his hedge funds and manipulating shock shared for his company, Retrophin Inc.

He took $11million of stock from his firm and shelled it out to investors in two failed hedge funds he ran.

He official release date is scheduled for October 2023.

Shkreli is best known for hiking up the price Daraprim, a life-saving HIV/Aids medication, by 5,000 per cent in 2015.

Shkreli was sued by federal and state authorities in January for using unscrupulous tactics to stop competitors making versions of Daraprim and raising the cost from $13.50 a pill to $750 (5,000 per cent). 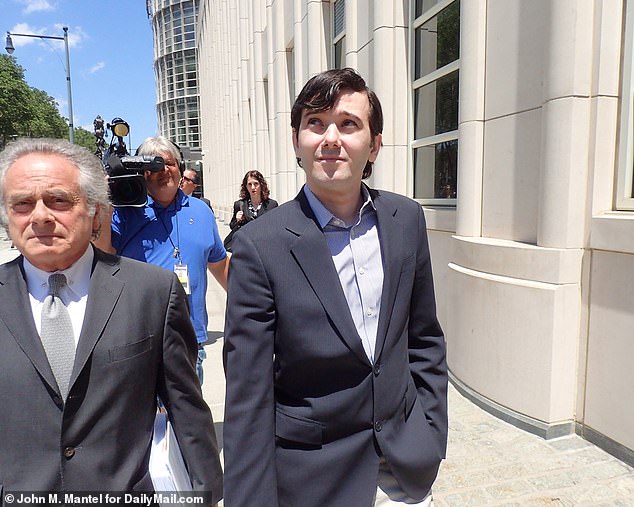 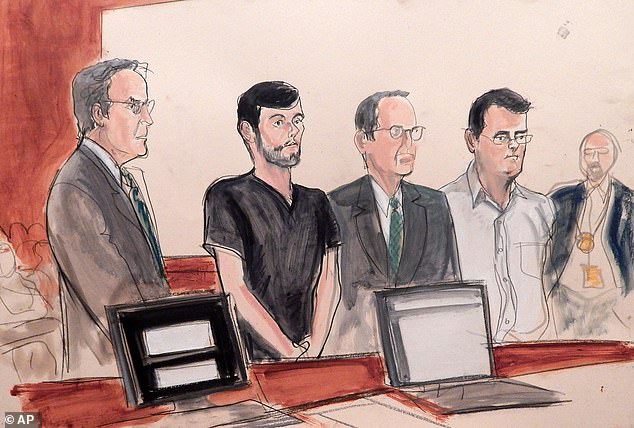 Pictured: In this courtroom sketch, entrepreneur and former hedge fund manager Martin Shkreli (left) appears in court for his arraignment on fraud charges in 2015

Shkreli was CEO of Turing Pharmaceuticals – now called Phoenixus AG – when he hiked the price of the drug in 2015.

The drug is used to treat toxoplasmosis, a parasitic infection that can be deadly for people with HIV or other immune-system problems and can cause serious problems for children born to women infected while pregnant.

He was named in lawsuits filed by the New York attorney general’s office and the Federal Trade Commission.

Attorney General Letitia James said in a statement that Shkreli and the firm’s current chairman Kevin Mulleady ‘held this critical drug hostage from patients and competitors as they illegally sought to maintain their monopoly.’

At least four potential competitors have so far been kept from making cheaper generic versions of the medication, the suit says.

Brafman said Shkreli ‘looks forward to defeating this baseless and unprecedented attempt by the FTC to sue an individual for monopolizing a market.’

After acquiring the rights to the drug in 2015, Shkreli said in an email to a contact: ‘Should be a very handsome investment for all of us.’

The increase left some patients – who typically need to take the drug for several weeks – facing co-pays as high as $16,000 and sparked an outcry that fueled congressional hearings.

Then the company ‘kept the price of Daraprim astronomically high by illegally boxing out the competition,’ FTC official Gail Levine said in a statement Monday.

The drug’s patent protection had expired, but the company used what’s known as a ‘closed distribution system’ to restrict who could buy it. This meant that companies interested in making a generic version of Daraprim couldn’t get enough pills to do required testing, according to the lawsuit.

Many passages are redacted because the investigation may have involved competitive corporate information, the AG’s office said.

The drug had previously been available from various wholesalers and distributors, but it was moved to closed distribution a few months before Turing bought the rights to it.

The lawsuit also accuses the company of maneuvering to cut off potential rivals’ access to suppliers of a key ingredient for the medication and to data they would want to evaluate the drug’s market potential.

The ‘elaborate scheme to prevent generic competition’ has likely cost consumers and other drug buyers tens of millions of dollars, the suit says.

To date, there is no generic version of Daraprim on the U.S. market.

The suit seeks unspecified financial relief and penalties, plus an order barring Shkreli and Mulleady from ever owning or working for any pharmaceutical company. 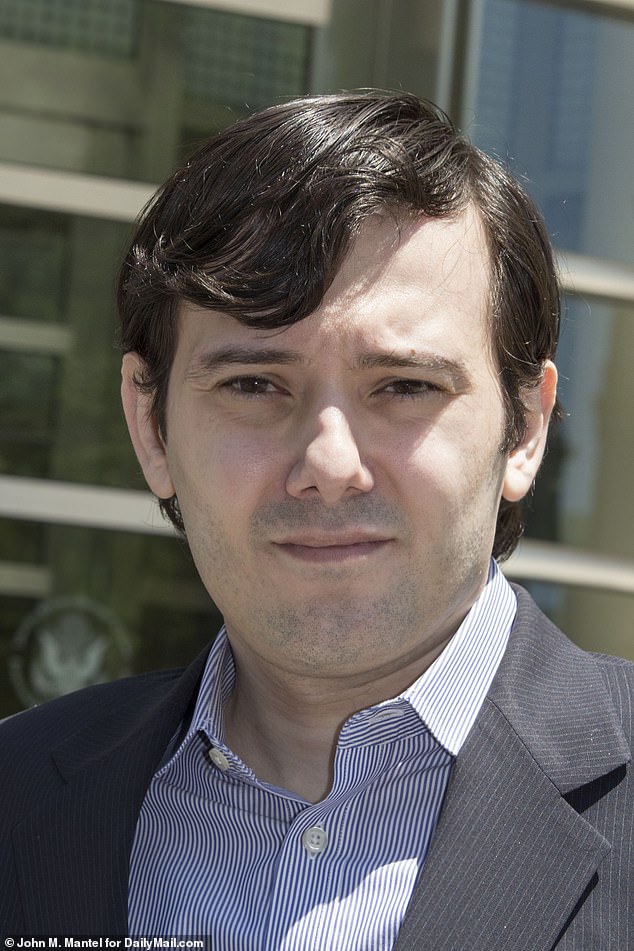 ‘We won’t allow “Pharma Bros” to manipulate the market and line their pockets at the expense of vulnerable patients and the health care system,’ said James, a Democrat.

Shkreli raised eyebrows with his behavior both in business and elsewhere.

He bought a one-of-a-kind, unreleased Wu-Tang Clan album for $2 million, called members of Congress ‘imbeciles,’ taunted prosecutors in the securities-fraud case against him, got kicked off of Twitter for harassing a female journalist and spent countless hours live streaming himself from his apartment.

While awaiting sentencing on his 2017 conviction, he offered his online followers a $5,000 bounty for a lock of former Democratic presidential nominee and Secretary of State Hillary Clinton’s hair.

His lawyers said it was a joke, but a judge revoked Shkreli’s bail and jailed him.

At his 2018 sentencing, Shkreli choked up, admitted making many mistakes and said he’d evolved.

Three weeks ago, Shkreli also revealed he’s engaged and requested to spend the rest of his sentence with her at her Manhattan apartment.

A ruling on that has not yet been determined.