The victory came after 22 holes of finely balanced play between two of golf’s greatest players and organisers even had to call on artificial lighting to ensure the game reached a conclusion in bitter cold conditions.

Both players were miked up for the entire round, giving fans a rare insight into discussions between themselves and their caddies, but it was the unmistakable tones of Samuel L. Jackson introducing them that was the first sign of what was to come. 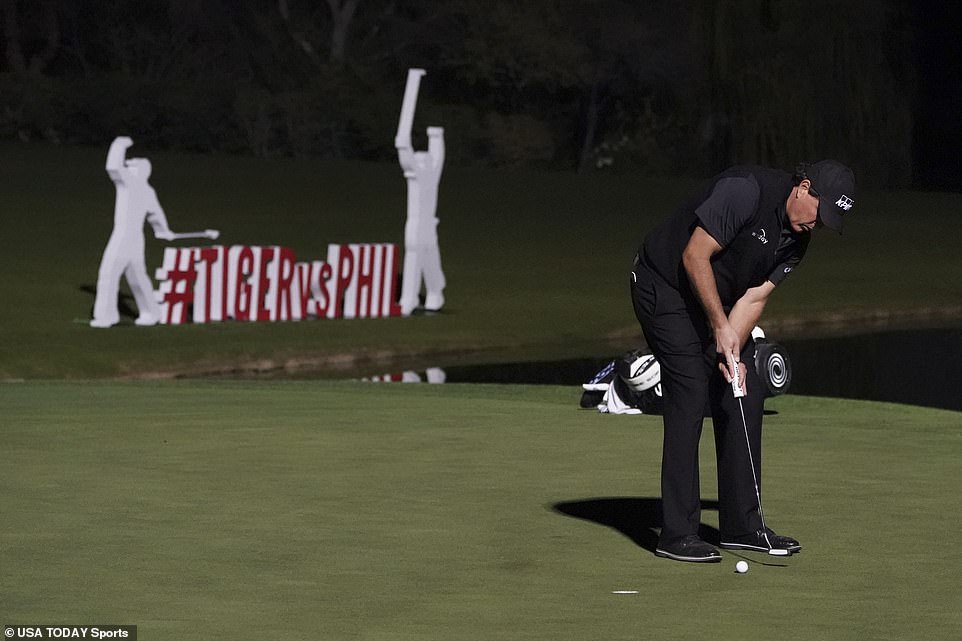 After plenty of missed opportunities from both men, Mickelson finally converted from close range for a birdie 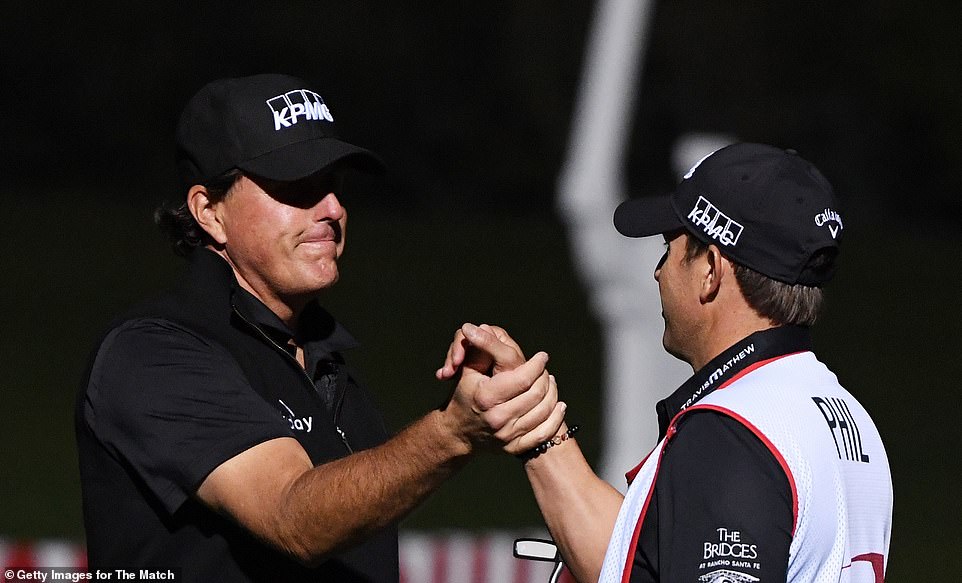 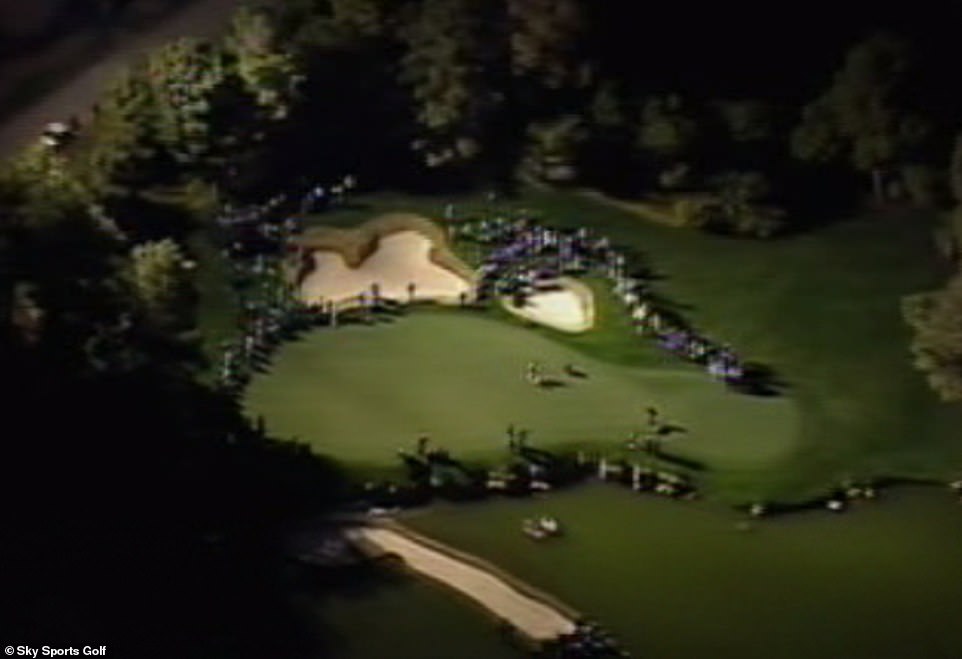 The pair made a number of astonishing side bets throughout the round with Mickelson costing himself $200,000 on the first hole alone as he failed to make birdie while $1,000,000 was then staked on the ninth.

At Tuesday’s pre-event press conference, Mickelson had bet $100,000 he would birdie the par-four first hole, Woods said double it and the wager was accepted.

However following an ideal tee shot on the 379-yard par four and an approach to eight feet, Mickelson missed his birdie attempt after Woods had also failed to convert from slightly further.

Conversation from tee to green ventured between their shots, the weather forecast and even the emotional strain of their children leaving for university.

Both players missed the green on the second but, after Mickelson got up and down for par, Woods missed from three feet to lose the hole.

Woods also had to scramble for par after a wayward drive on the next before producing the first moment of quality of the day, a superb wedge from 107 yards setting up a conceded birdie which was matched by Mickelson. 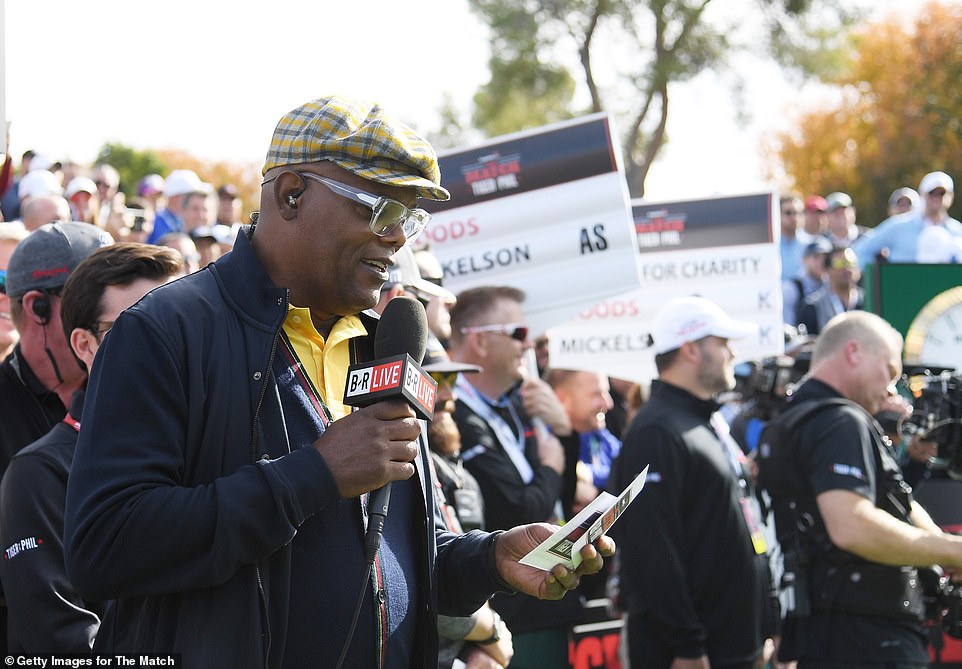 The unmistakable tones of actor Samuel L. Jackson introducing the players was the first sign of what was to come 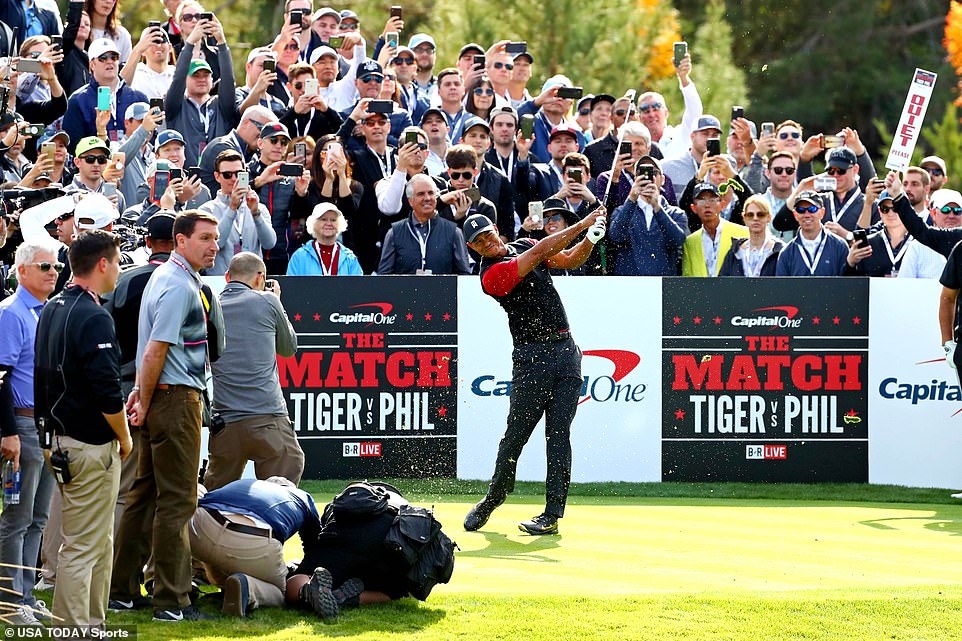 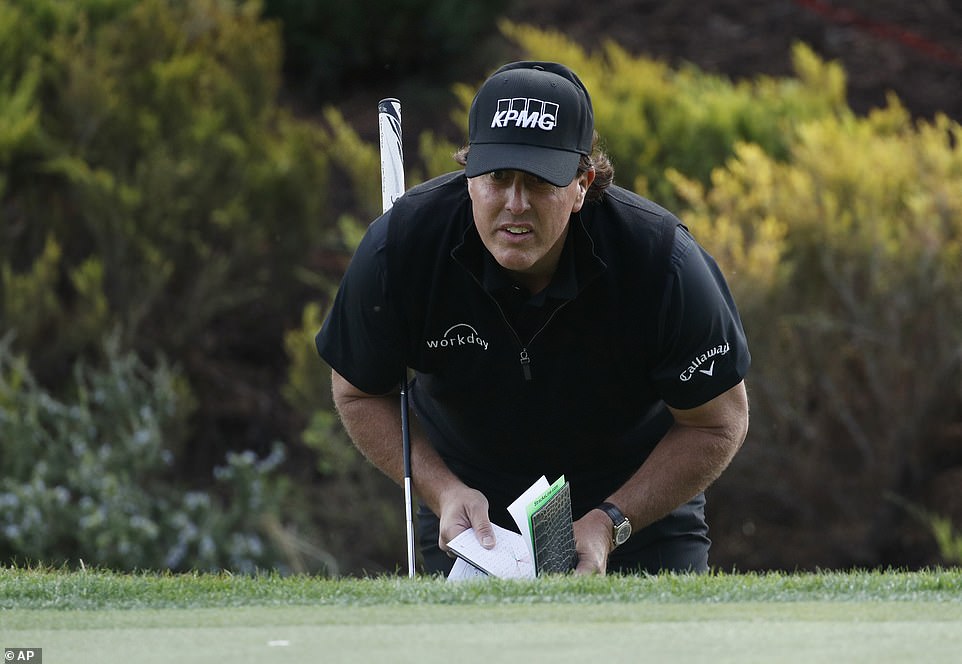 Mickelson squats down on the side of the first green as he tries to read the surface before making his putt for $200,000 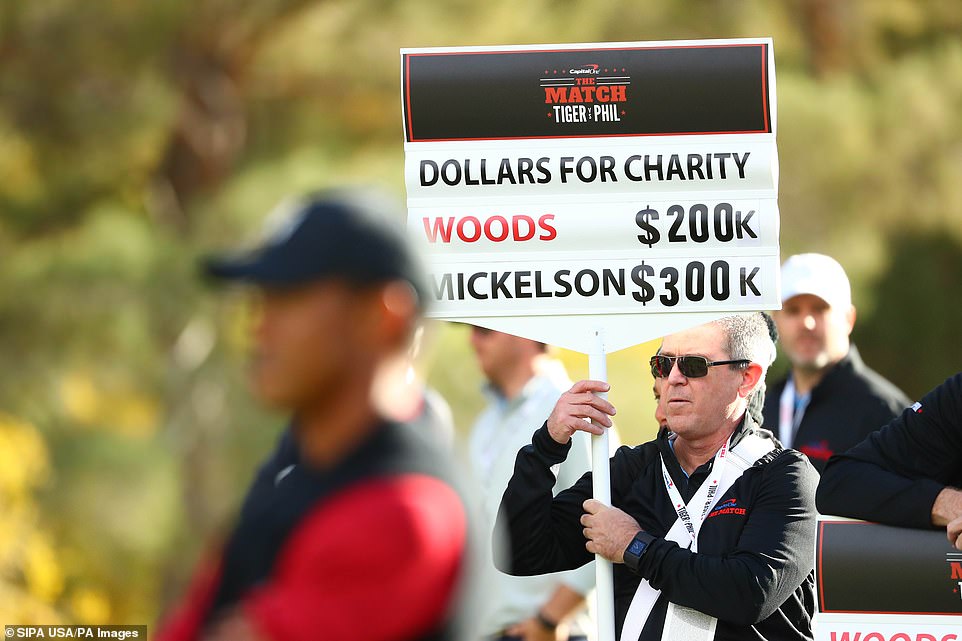 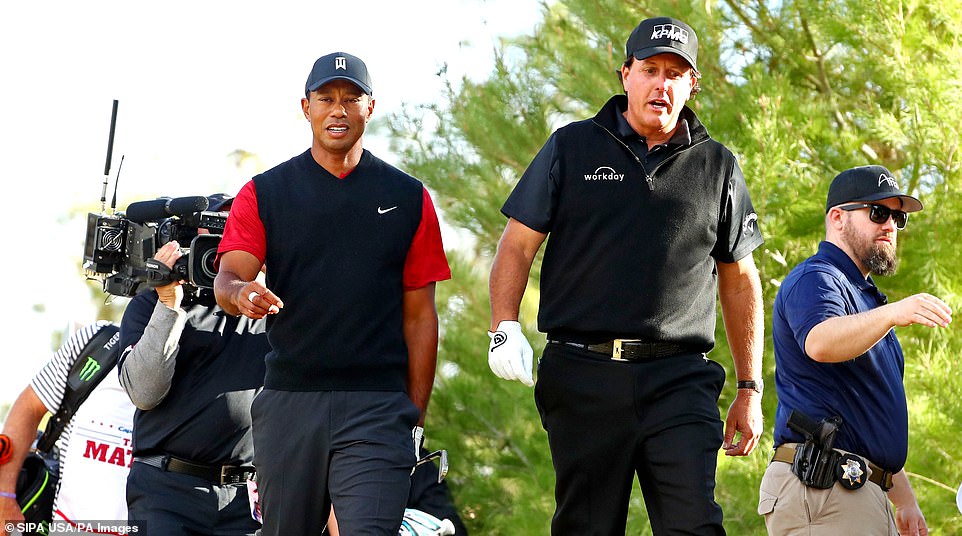 Both players were miked up for the entire round, giving fans a rare insight into the debate and discussions had between stars 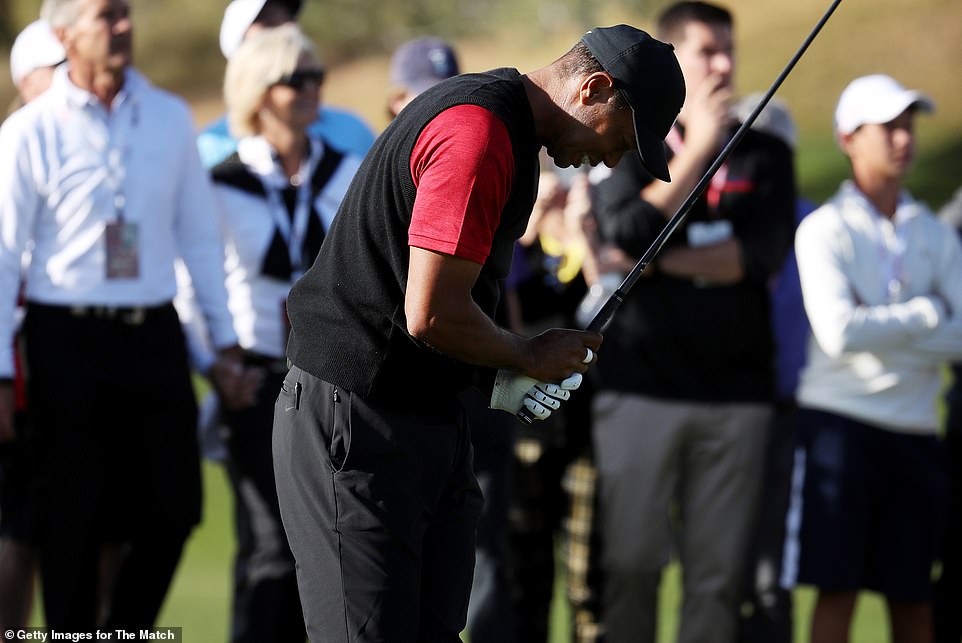 The players then agreed a bet of $100,000 on whose tee shot would finish nearer the pin on the par-three fifth hole and Mickelson won it comfortably after an approach to 10 feet was followed by a mediocre effort from Woods.

Woods got back on level terms with a two-putt birdie on the par-five seventh, but promptly three-putted the next to fall one down again.

Mickelson also won the nearest-the-pin side bet on that hole for $200,000 and the stakes were raised even higher on the ninth, with $1,000,000 up for grabs for making an eagle on the par four.

However, the mediocre golf continued as Woods hit his approach to 80 feet and Mickelson came up short in a green-side bunker.

Woods drew level for the second time with a birdie on the short par-four 11th and edged in front with another birdie on the next after a superb approach to two feet.

Mickelson won his third nearest-the-pin contest on the 13th, a victory worth $300,000, and also converted the birdie attempt from nine feet to get the match back to all square with five holes to play.

He edged in front again when Woods bogeyed the 15th and the left-hander looked set to have a putt to win the match on the 17th when Woods missed the green with his tee shot. 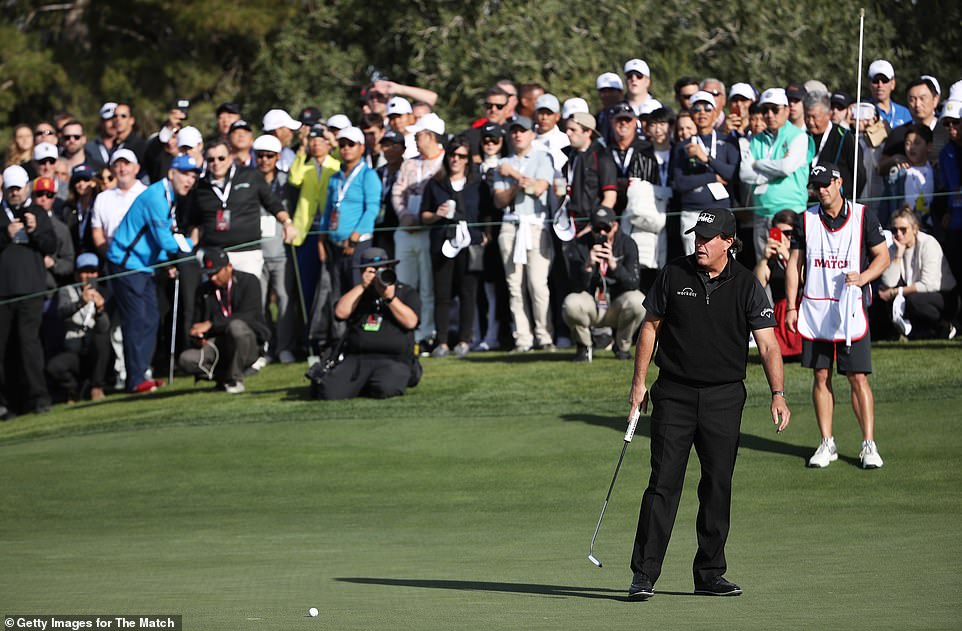 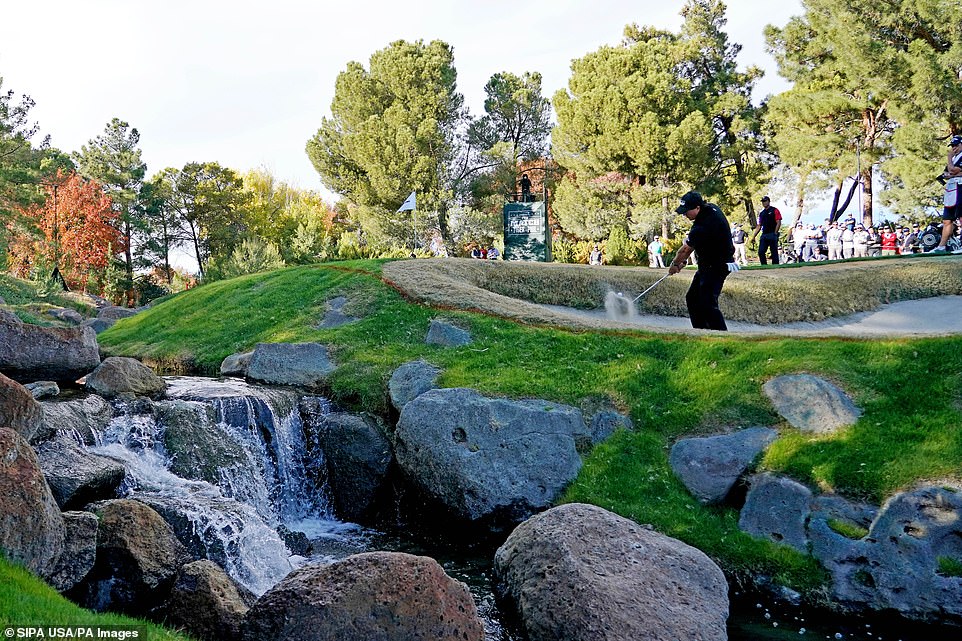 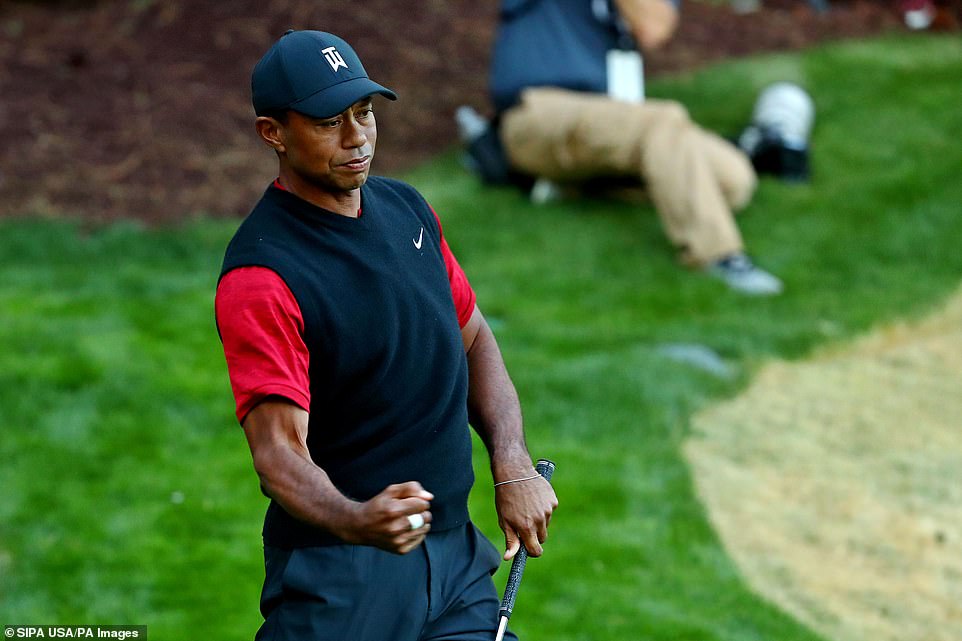 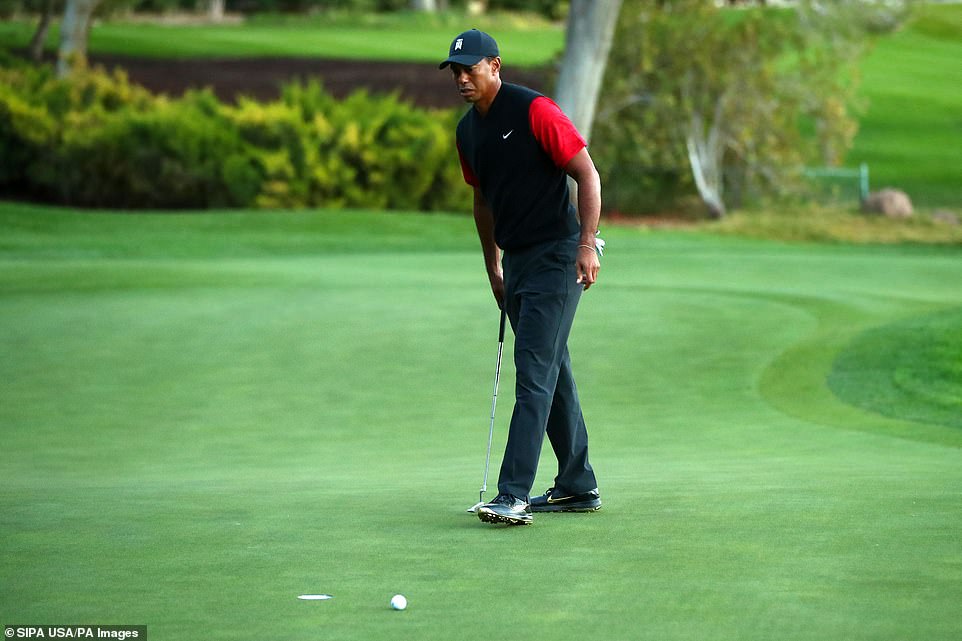 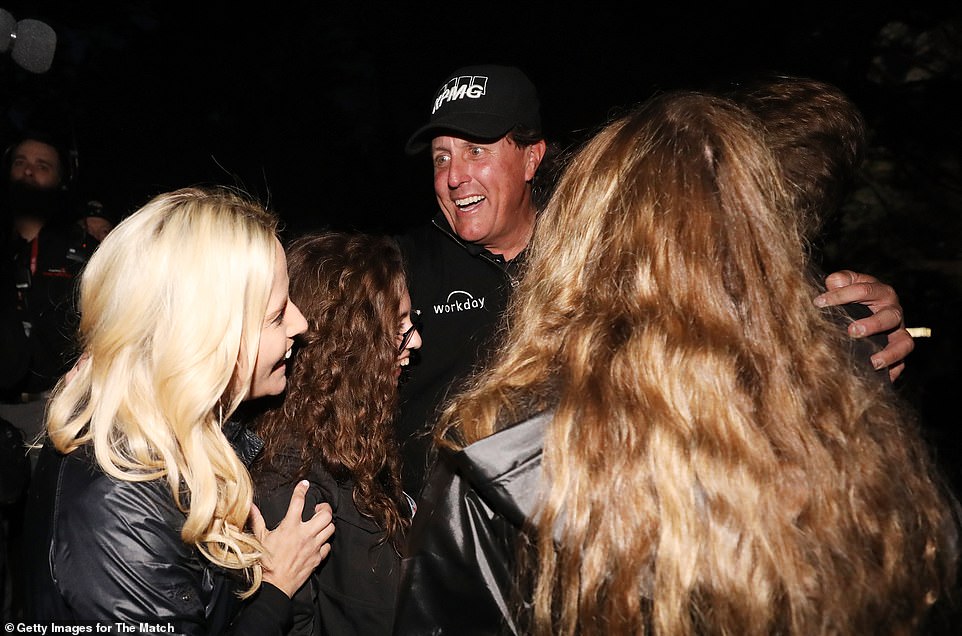 However, Woods chipped in for an unlikely birdie and Mickelson could not match it from 12 feet, meaning the match was all square heading to the 18th.

Woods two-putted the par-five 18th for birdie and then generously conceded Mickelson’s birdie putt when the 48-year-old was faced with a three-footer to keep the contest alive.

That meant the players returned to the 18th for the first play-off hole and, with daylight fading, if the match was not resolved there they would use a makeshift 95-yard hole to decide the outcome.

It was advantage Mickelson off the tee as Woods was forced to lay up following an errant drive, but Mickelson’s approach plugged in a green-side bunker and Woods hit his approach to seven feet, but after Mickelson could only make par, Woods missed the $9m putt and the makeshift hole was required.

Mickelson missed from 20 feet for a winning birdie on the first playing of the makeshift hole and from five feet the second time, but made no mistake from three feet at the third time of asking to finally seal victory.

He insisted he was relieved to have got one over his old rival: ‘My heart can’t take much more, it has been an incredible opportunity to have a day like this with Tiger. To be able to have just a little bit of smack talk over the coming years means a lot to me because I don’t have much over him.’