Basketball superstar Ben Simmons is now ‘doubtful’ to play for Australia at the World Cup.

In a major blow to the Boomers’ hopes of claiming a medal in China in September, Simmons’s US agent Rich Paul said the All-Star guard is more likely to spend his NBA off-season working on his game in preparation for another championship tilt with the Philadelphia 76ers.

The announcement to Australian basketball fans who expected to watch Simmons lead the Boomers against the United States in two pre-World Cup exhibition games in Melbourne in August.

‘Simmons is more likely now to spend his full off-season preparing only for the Sixers season – free of national team responsibilities,’ ESPN reported.

Earlier this month the 22-year-old reportedly began negotiating a $240m contract over five years to continue to playing for the Philadelphia team, a deal that if finalised would make him Australia’s highest paid athlete.

The deal faced criticism from those who did not believe he was worth the money due to his lack of a reliable outside shot.

This weakness was exposed badly during at match against the Lakers in February when LeBron James left Simmons undefended to take a three-point shot and he missed.

During the 2018-19 NBA season, Simmons had been cagey when asked by reporters if he would play for Australia at the World Cup, but just days after the end of the 76ers’ season he announced on social media he would play for the Boomers. 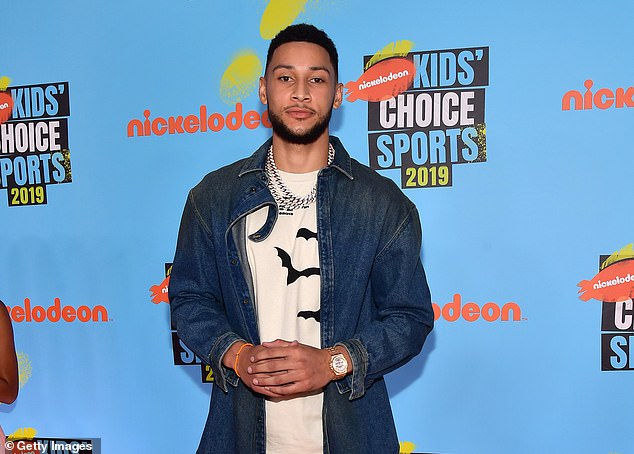 Earlier this month the 22-year-old reportedly began negotiating a $240m contract over five years to continue to playing for the Philadelphia team, a deal that if finalised would make him Australia’s highest paid athlete

The Melbourne born star announced his commitment to the Australian nation team before later uploading footage of his accompanying number 25 guernsey last month.

‘I am going to be a Boomer for the upcoming events so stay tuned,’ he said in a video on Twitter.

He then followed the announcement with a sister post to the Chinese social media network Weibo and thanked them for their support in the NBA season.

‘Ni Hao China! Thanks for all the support this season, it was a tough way to go out,’ Simmons captioned the video.

‘I’m happy to say I’m looking forward to representing my country Australia in the upcoming  at FIBA World Cup in China.’

The announcement was meet with tremendous support from Australian and Chinese fans.

Simmons was said to be a major highlight in Australia’s World Cup line up and leaves Boomers coach Andrej Lemanis searching for a replacement with the exhibition games against Canada starting in mid August.