Philadelphia cop, 35, is charged after he was caught attacking demonstrators with pepper spray

The Philadelphia District Attorney has announced charges against a SWAT officer who was caught on camera using pepper spray on activists who were sitting in on the interstate last month.

Video footage shows Richard Nicoletti, 35, attacking several people peacefully protesting on June 1 and on Wednesday, he faced three counts of simple assault, recklessly endangering another person, official oppression, and one count of possession of an instrument of crime.

The Philadelphia Police Department Internal Affairs Division initiated the investigation, and referred information regarding Officer Nicoletti’s use of force to the District Attorney’s Office (DAO) Special Investigations Unit on June 24.

According to the police department, Oleoresin capsicum is usually only authorized to be used when an offender is physically resisting, fleeing arrest or believed to be a potential danger to themselves of others. 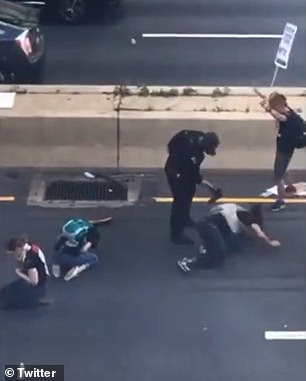 Video footage shows Richard Nicoletti attacking several people peacefully protesting on June 1. He pulled off one woman’s goggles and pushed a man to spray them in the face on Philadelphia’s I-676

The guidelines, issued September 2015, do not apply to demonstrators exercising their Constitutional Rights of Free Speech or Assembly. In those cases officers are advised to disengage.

State and local officers had been deployed to the City Center because the civil unrest was blocking one side of the interstate around 5pm. 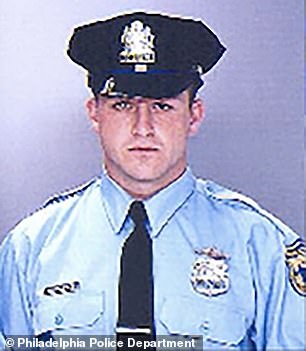 Richard Nicoletti, 35, faces three counts of simple assault, recklessly endangering another person, official oppression, and one count of possession of an instrument of crime

Demonstrators reported that several canisters of tear gas landed in their direction when the SWAT team arrived and some participants carefully moved them away.

In the video widely shared last month, the officer is seen targeting two protesters directly in the face, which is against protocol. He is seen pulling down the goggles of one victim just target her eyes.

He is then seen violently pushing a third to spray them. Footage shows the victim swing in the officer’s direction, without contact as they are unable to see and wobbling dangerous close to traffic.

The victims are seen trying to treat the burning sensation, which usually lasts for 30 minutes. Although officers are supposed to reassure the person OC spray has been used on that the pain will subside, the cop strolls off while another demonstrator goes over to help two of them. 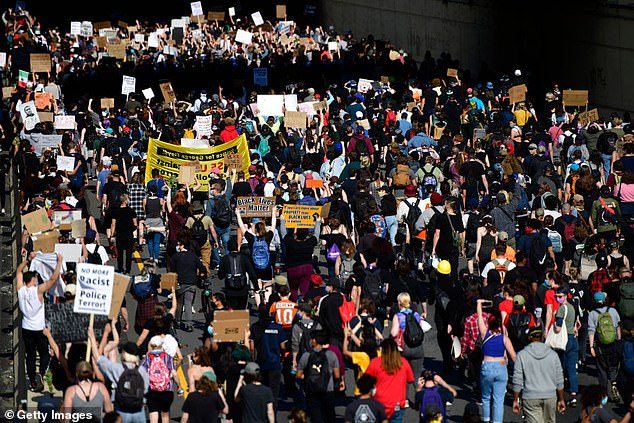 Protesters are seen marching in the same area before their victims were pepper sprayed on June 1. The Philadelphia Police Department Internal Affairs Division initiated the investigation, and referred information to the DA on June 24 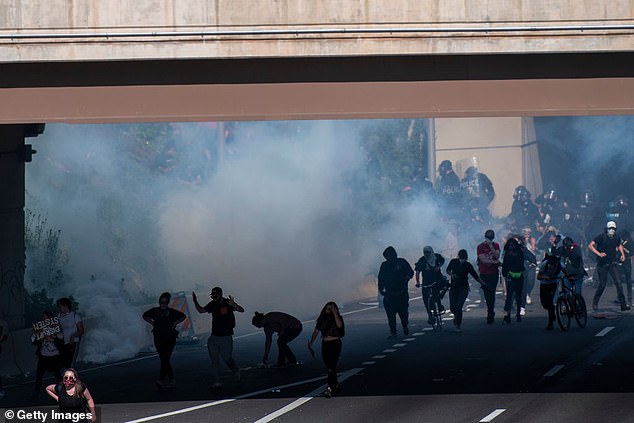 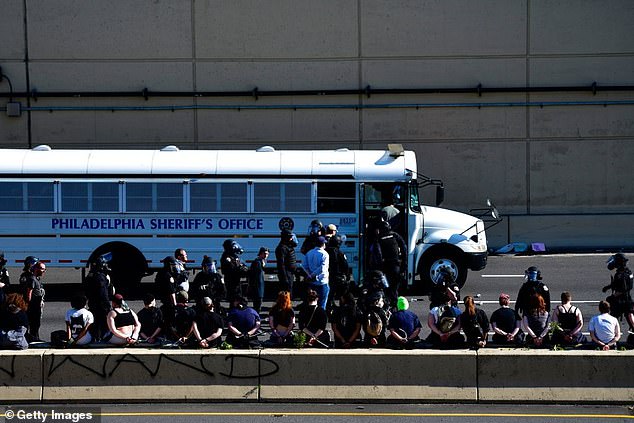 Arrested protesters stand and sit on a barrier of the Vine Street Expressway after tear gas was shot to disperse the crowd on June 1. The pepper sprayed victims were not arrested and were helped off the interstate by other protesters after their vision was impaired

Pepper spray victims are also supposed to be offered medical treatment if necessary but the group was left to find their own way off the I-676 even though their vision was impaired.

Other protesters helped them leave and the victims were not arrested so it is unclear why the option of ‘less than lethal force’ was taken by Nicoletti.

Mayor Jim Kenney and Police Commissioner Danielle Outlaw apologized for the use of tear gas which caused panic and confusion near the 20th Street overpass.

They issued a moratorium on the use of it to disperse crowds of people under certain conditions.

‘Thanks to the investigative work of Philadelphia Police Internal Affairs and careful, additional investigation done by the DAO Special Investigations Unit, we are moving forward today with evenhanded justice. Great care has gone into our factual investigation to get the truth. We are also keeping our sworn oath to uphold the Constitution,’ District Attorney Krasner said.

‘The complaint alleges that Officer Nicoletti broke the laws he was sworn to uphold and that his actions interfered with Philadelphians’ and Americans’ peaceful exercise of their sacred constitutional rights of free speech and assembly. 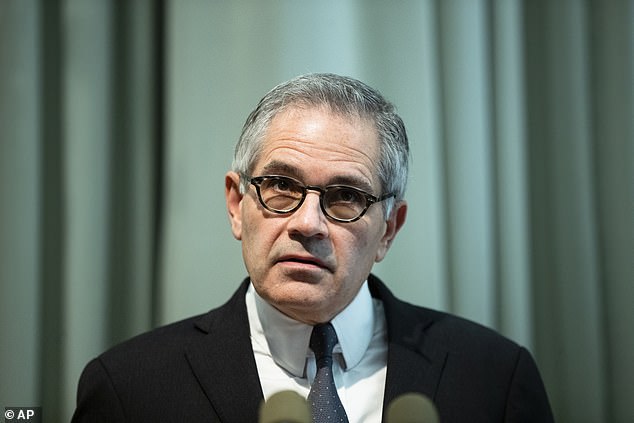 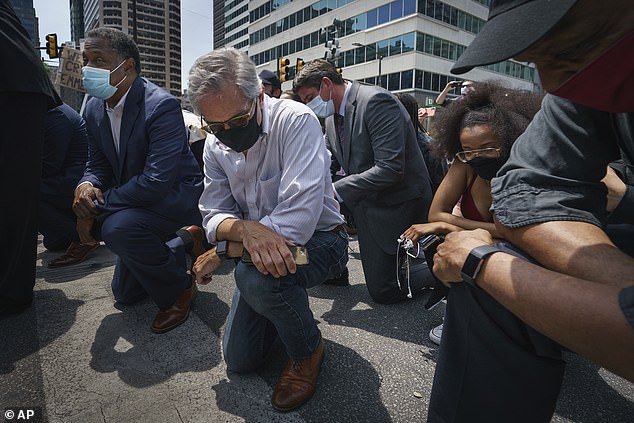 Larry Krasner takes a knee in honor of the memory of George Floyd on June 4. He said they are ‘keeping our sworn oath to uphold the Constitution’ as he announced the charges on Wednesday. ‘The Philadelphia District Attorney’s Office will not make excuses for crimes committed by law enforcement’

‘The Philadelphia District Attorney’s Office will not make excuses for crimes committed by law enforcement that demean the democratic freedoms so many Americans have fought and died to preserve.’

The DA’s statement came as President Trump has threatened to unleash troops on the streets of many US cities where protests are taking place.

Some in Portland were seen taking demonstrators away in unmarked cars without reason, which prompted the ACLU and politicians to warn Trump they may retaliate with legal action if the invasion continues.

‘Let’s be clear on who built these highways and streets: These streets come from and belong to the people. In the words of generations of peaceful protesters committed to improving our country, which is what patriots do: “Whose streets!? Our streets!”‘

Philadelphia Fraternal Order of Police Lodge #5 President John McNesby rushed to Nicoletti’s defense after hearing the charges and pushed for the punishment of civilians in unrelated incidents.

‘Once again DA Larry Krasner is only charging Philadelphia police officers following the recent unrest in the city, McNesby said in a response to the charges. ‘Krasner refuses to hold unlawful protesters accountable, those who set fire and looted our great city … His top priority is to push his anti-police agenda.

‘This double-standard of justice is unacceptable to our brave police officers who work tirelessly to keep our city safe. We will provide an appropriate defense for officer Nicoletti as this process moves forward.’