An adrenaline junkie tests the limits and throws himself off cliffs – with his daredevil dog.

Chase Reinford, 24, goes canoeing, dirt-biking and flies planes with his puppy, Paco, as well as base jumping with him.

The thrill-seeker rescued Paco, a suspected chihuahua mix who is thought to be around a year old, after nearly running him over on a remote desert road, where he is believed to have been dumped.

Adventure: Chase Reinford, 24, of Philadelphia, Pennsylvania, rescued Paco the dog from the middle of the road in November 2017 and the two frequently base jump 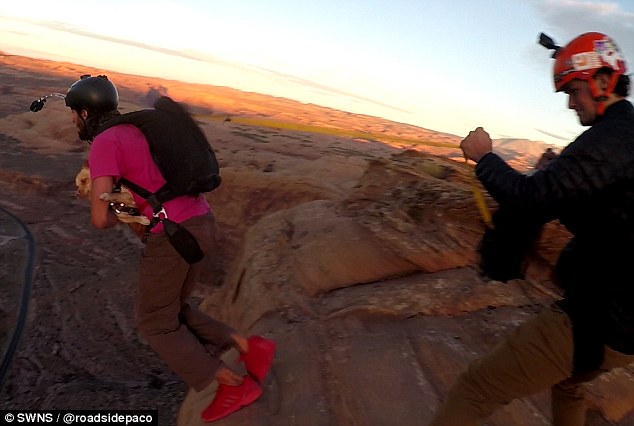 Safe: Chase said that he would never want Paco to get hurt and always tries to ‘minimize’ the risk for their excursions Adrenaline: The pair have done three base jumps now with the highest being from 400ft

Chase said: ‘There was nothing around and I was zoning out a little when this guy in front of me swerved.’

‘I saw Paco standing in the middle of the road and slammed on my brakes. I thought I was going to hit him – it was 60mph on the highway.’

‘I ended up stopping a couple of feet in front of him and could see he was freaked out so I got out, squatted and put my arm out.’

‘He was shaking but he came up to me and I grabbed him real quick.’

‘I don’t know how long he was out there for but my theory was that someone abandoned him in the middle of the desert.’

He planned to take him to a shelter but the pair developed an instant bond and Chase, who was partway through a US road trip, couldn’t bear to leave him. 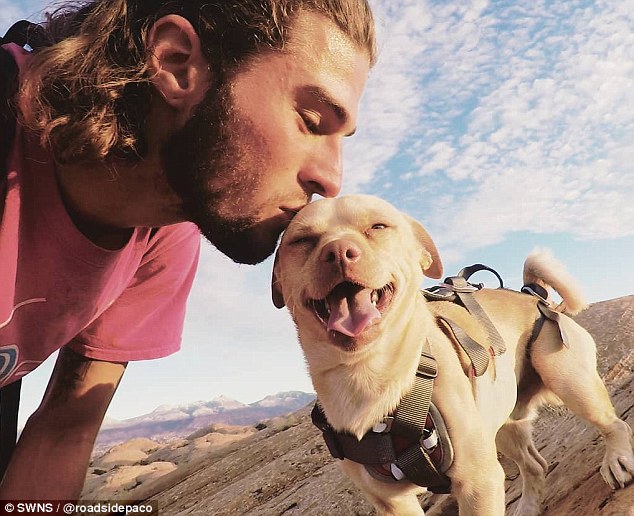 Scared: Chase could tell Paco was afraid so he stuck out squatted down to his level and put his arm out 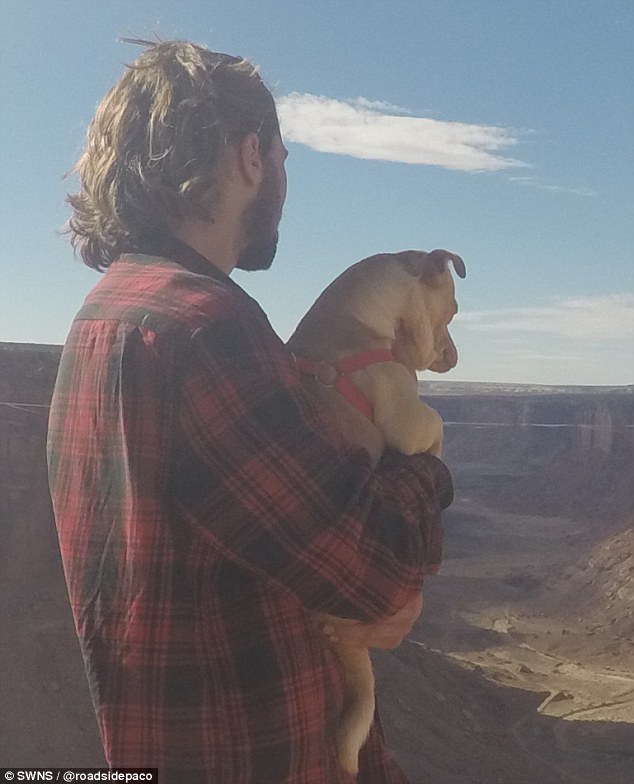 Abandoned: Chase he thinks that Paco was abandoned in the middle of the desert 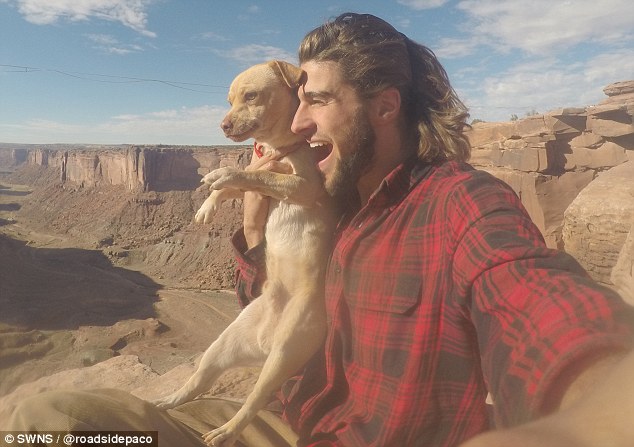 Instant bond: Chase planned to take him to a shelter but the pair developed an instant bond

Now the duo explore the world together and are inseparable. So much so that Paco hates being left, even for a few minutes.

As a result, Chase lets Paco join him when he’s doing extreme sports and even made a special dog harness so he could go base-jumping.

The YouTube star from Philadelphia, Pennsylvania, said: ‘Paco is definitely a thrill seeker. He constantly wants adventure. When I first got him we would go out on the cliffs.’

‘He would watch me and my friends base jumping and rock climbing and he hated being left by himself – he always loves to go with.’

‘I could tell he was not content with just watching, so we were like, “How can we make this happen?”‘ 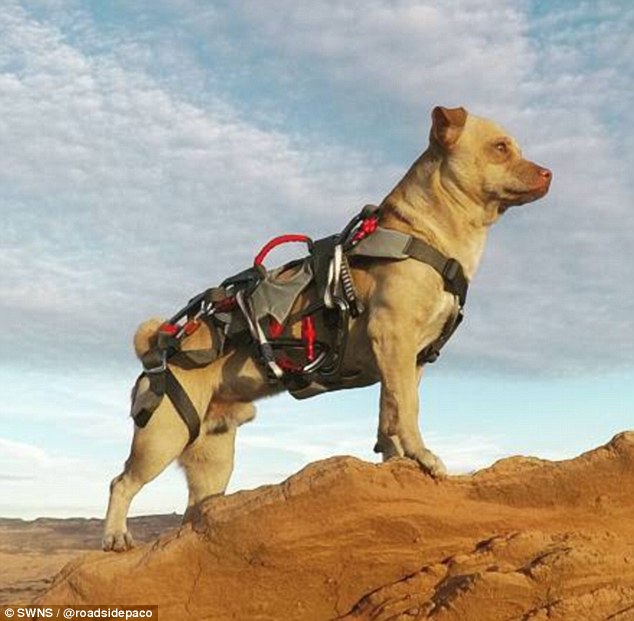 Special harness: The two are not inseparable and Paco even has a special extreme sports harness 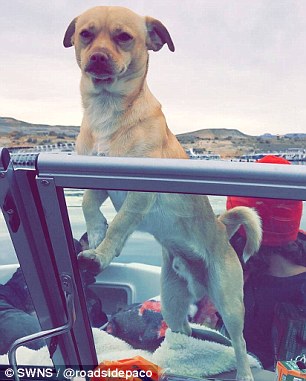 Not content: Paco wasn’t happy just watching so Chase made it so Paco could join

‘I rigged up a little doggy harness and tried to work up to it by having him watch us so it wouldn’t be a freaky situation.’

‘We started doing it and he seemed to enjoy it. He was very comfortable.’

Chase, who vlogs at his channel, Adrenaline Addiction, added that Paco wasn’t even nervous for his first jump.

‘Even the first jump when we were at the edge of the cliff he wasn’t freaking out or shaking or showing signs of nervousness,’ Chase said.

‘When I jumped he was like, “This is weird,” but I don’t think it was fear. When he landed he was wagging his tail and acting like nothing had even happened.’

‘The second time he seemed to enjoy it way more. Now when I get his harness out he gets super excited.’

The pair have done three base jumps now with the highest being from 400ft.

Chase said: ‘I wouldn’t do anything that puts Paco in any sort of danger and I try to minimize the risk.’ 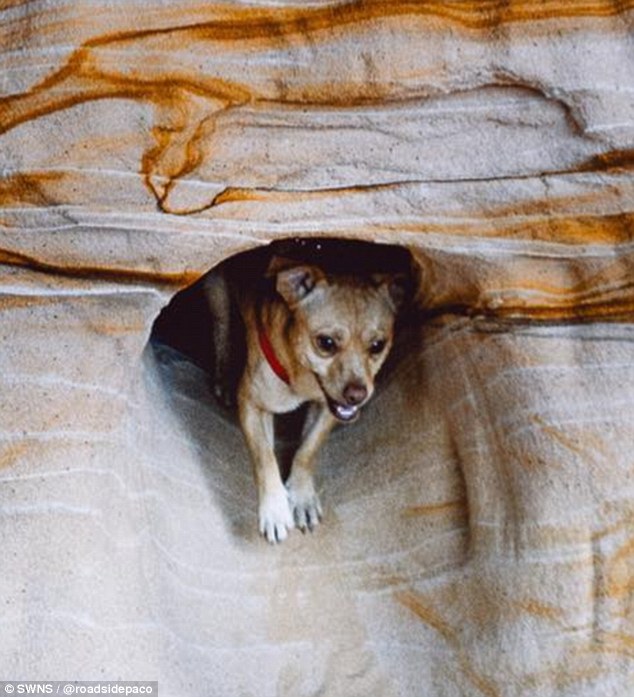 Super excited: The second time he base jumped, Paco seemed to enjoy it way more and now gets excited when Chase gets his harness 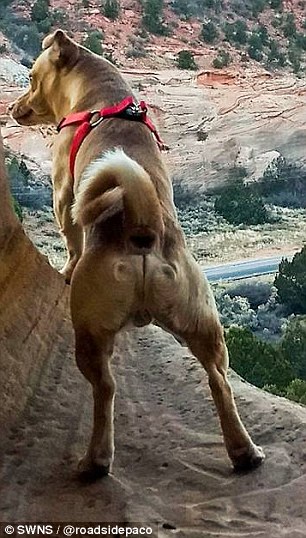 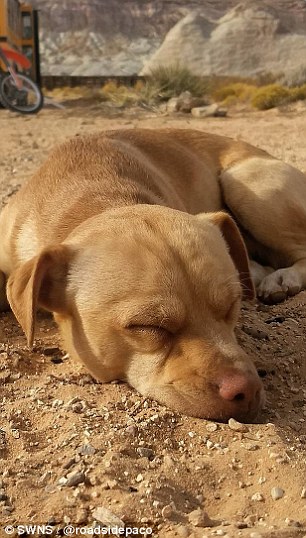 No danger: Chase said he  wouldn’t do anything that puts Paco in any sort of danger 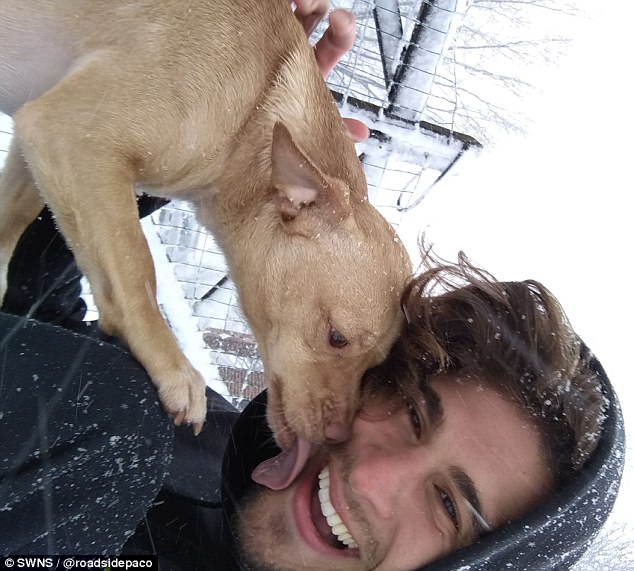 Travelers: Paco and Chase are heading to Mexico later in March and Italy and Switzerland later this year

‘I have someone with me when I’m base jumping with Paco who can assist me pulling my parachute which decreases the impact on your body – I would never want him to get hurt.’

Chase dreamed of being a professional snowboarder but was forced to ditch his career plan after suffering a serious injury in 2012.

He set off to travel the world around two years ago and picked up Paco in November 2017 while driving to Lake Powell, Arizona, in his old yellow school bus.

The two instantly had a connection and despite Paco being ‘very timid in the beginning’.

‘I got him on the bus and he was very timid in the beginning but I could tell he trusted me and knew I had saved him,’ Chase said.

‘He was shaken up for the first day or so but then he was a normal dog and we bonded real quick.’

‘I was going to take him to a shelter but that changed when I saw how awesome of a dog he is – we are perfect for each other.’

Chase and Paco are heading to Mexico later in March and Italy and Switzerland later this year.