By Ap and Jake Fenner For Dailymail.Com

The Padres eked out just one hit against Zack Wheeler and the Philadelphia Phillies in an opening 2-0 loss on Tuesday night, becoming the first team to pitch a one-hitter get held to one hit in the same postseason.

‘We hit the ball but we couldn´t find the gap,’ Machado said. ‘We had a couple of hard-hit balls but they were right at guys.’

Soto, Machado and Grisham combined to go 0 for 9 with four strikeouts and one walk. The Padres went down in order in all but the first, fifth and ninth innings.

Grisham and Nola had helped power the bottom of the lineup, which hit .338 against the New York Mets in the NL wild card series and Los Angeles Dodgers in the NL Division Series. The first six batters were just .201.

Against the hot-hitting Phillies, the Padres’ lone hit was a single by Wil Myers in the fifth.

‘This is a tough one to swallow because offensively we just have to do a better job,’ Nola said. ‘We are going to turn the page on this one quick.’

Padres starter Yu Darvish gave up home runs to Kyle Schwarber and Bryce Harper plus a single to Schwarber in seven innings. He struck out seven and walked one.

‘Those are the type of games that give you a chance to win,’ Padres manager Bob Melvin said. ‘We just couldn´t do enough offensively.’ 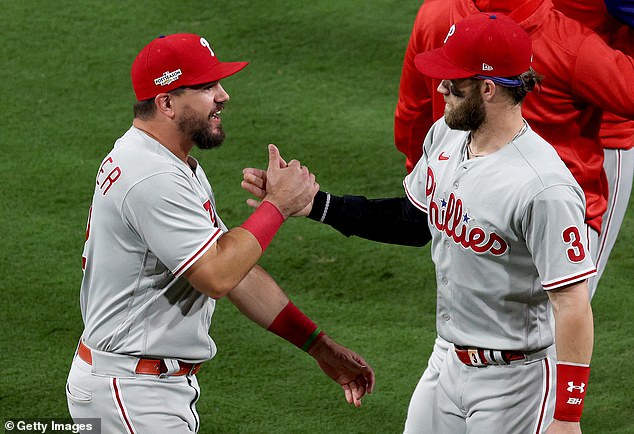 The yellow towel-waving crowd of 44,826 did its part, exhorting the Padres with supportive chants throughout. The Rally Goose showed up, too, appearing on the giant video board in the eighth. But the big bird laid an egg.

The Padres adopted the goose as a good-luck charm after a real one landed in the Dodger Stadium outfield during their upset of Los Angeles.

With the shrieking crowd on its feet in the ninth, Profar drew a one-out walk. That brought Soto to the plate. He grounded into a fielder’s choice to third, but Alec Bohm botched the throw to second for an error.

Machado came up as the potential go-ahead run but flied out to right. Josh Bell swung over a cutter for a game-ending strikeout. 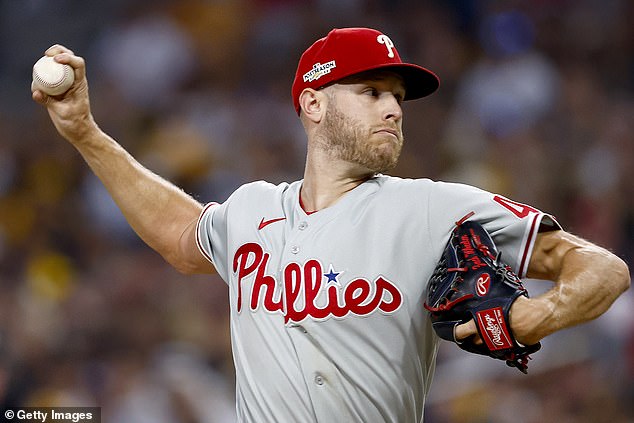 The win went to Zach Wheeler, who pitched seven innings of no-run, one hit baseball Tuesday

‘We always feel good when we have a chance to win in the ninth inning,’ Melvin said. ‘Didn´t happen. But it leaves kind of a bad taste in your mouth so you want to get (back) out there as quickly as you can.’

When the Padres weren’t striking out 11 times, they flied out or popped up or lined balls into the gloves of Philadelphia’s defense.

The Padres battled Wheeler in the first inning, when he threw 24 pitches. Machado saw nine pitches in his at-bat before he flied out to left.

San Diego had just two baserunners until the ninth. Soto drew a one-out walk in the first, but Machado flied out to left and Bell struck out.

‘We need to come out and swing the bats a little better,’ Melvin said. ‘It doesn´t get much easier.’ 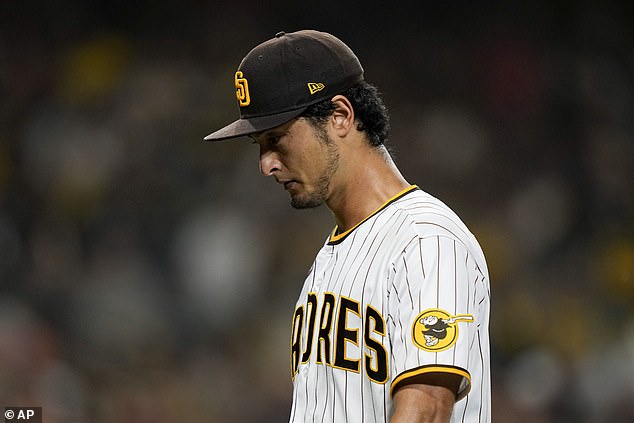 Yu Darvish may have struck out seven, but three hits surrendered the only two runs of the night