Philadelphia police inspector is charged with aggravated assault over baton use

A police inspector in Philadelphia has been charged with aggravated assault after disturbing footage emerged appearing to show him beating a college student in the head with a baton during a George Floyd protest.

Police Staff Inspector Joseph Bologna Jr was charged on Friday after video emerged of an incident in which protesters grappled with cops and one student was struck by a baton and subdued.

The student, identified by his attorney as 21-year-old Evan Gorski, a Temple University engineering student, detained for 24 hours, but was released without charges after officials saw the footage.

The incident unfolded on Monday during a demonstration at the Benjamin Franklin Parkway protesting the death of George Floyd. 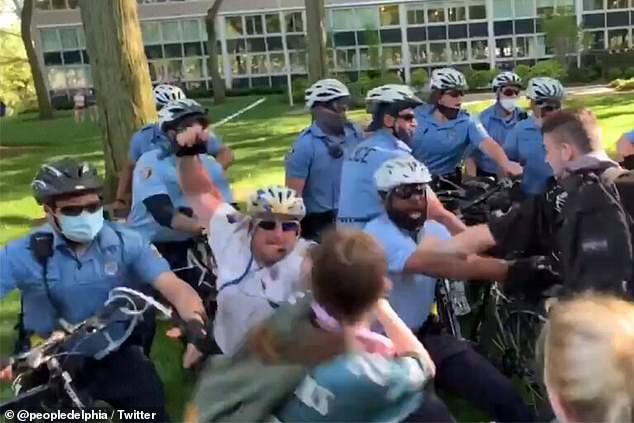 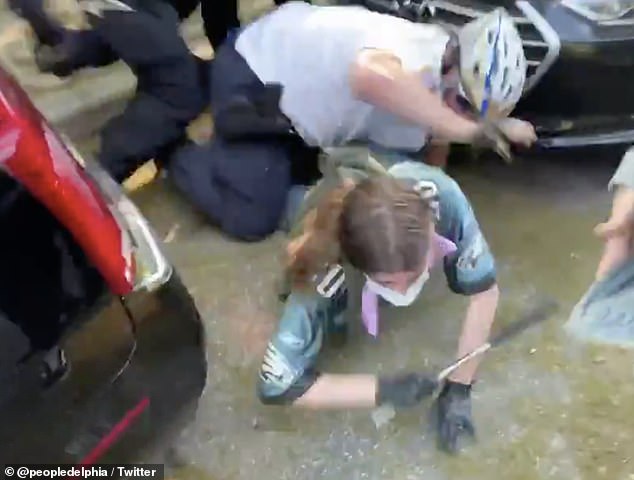 Bologna is seen wrestling Gorski to the ground and arresting him. Prosecutor Larry Krasner refused to charge Gorski, instead charging the police inspector

It was around 5.30pm, as the city’s 6pm curfew neared, and police were apparently attempting to disperse the crowd and get them to go home.

Video from the scene shows Bologna, wearing a white supervisor’s shirt, pushing back a group of protesters as they grapple with uniformed officers on a sidewalk.

As Bologna tries to pull apart an officer and protesters, Gorski, wearing a Philadelphia Eagles jersey, appears to reach over Bologna’s shoulder to grab another protester.

Bologna whirls around, and as Gorski retreats the officer strikes him across the head with  a collapsible metal baton, and pushes him to the ground

Another protester squirts Bologna with something from a water bottle as he grapples with the student on the ground. 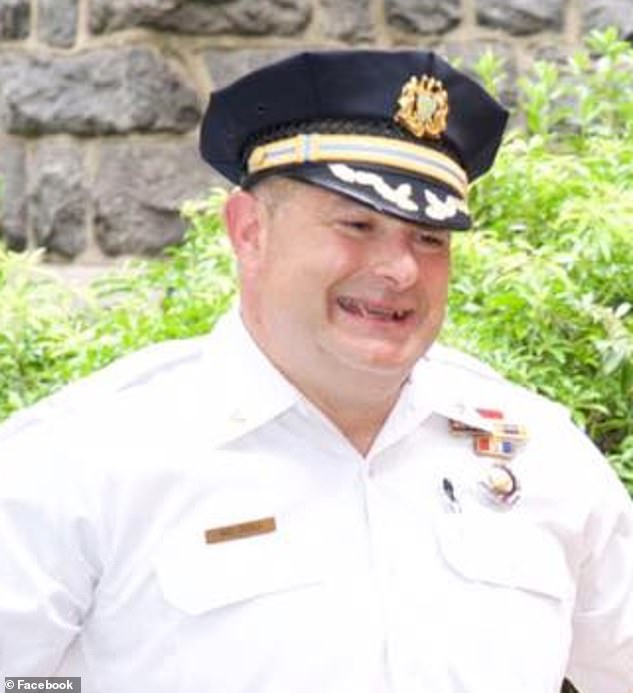 Bologna, a 31-year veteran of the Philadelphia police force, holds the rank of staff inspector 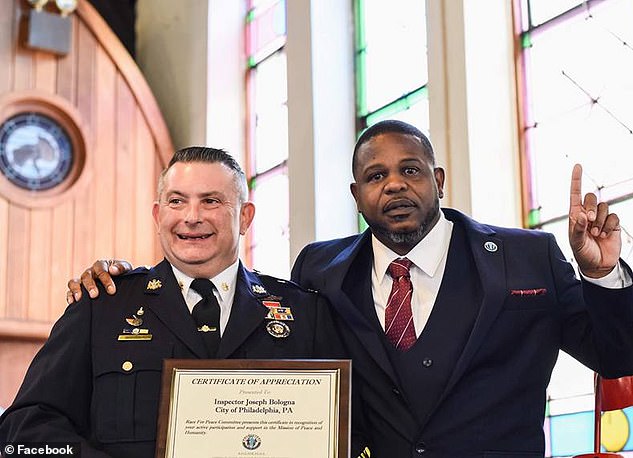 Bologna is seen being honored at a community event. Now he faces assault charges over a melee with protesters in which he struck a student on the head with a baton

Prosecutors say that the Temple student suffered serious bodily injury, including a large head wound that required sutures and staples in a hospital.

Police referred Gorski to prosecutors for charges, but after seeing the video, Philadelphia District Attorney Larry Krasner’s office declined to charge the student, and instead charged Bologna.

‘We are trying to be fair. Accountability has to be equal. This moment demands a swift and evenhanded response to violent and criminal acts based on the facts and evidence,’ DA Krasner said in a statement.

‘Americans are taking to the streets to demand a remaking of political, economic, and legal systems that serve the powerful at the expense of citizens’ health, welfare, and lives. There can be no safety or peace without justice. My office will continue to hold people who cause harm to others equally accountable,’ he continued.

Krasner was elected to office last year on a social justice platform, and his campaign was backed by a PAC funded by billionaire financier George Soros. 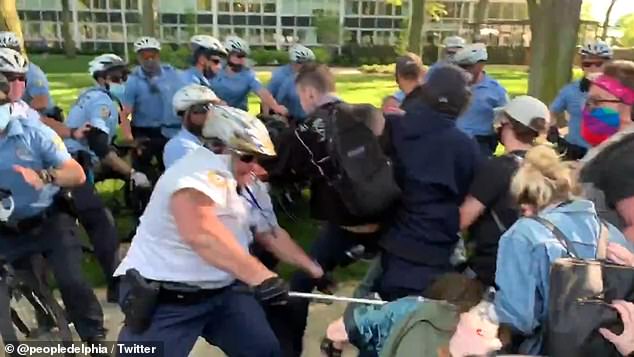 Police referred Gorski to prosecutors for charges, but after seeing the video, Krasner’s office declined to charge the student, and instead charged Bologna 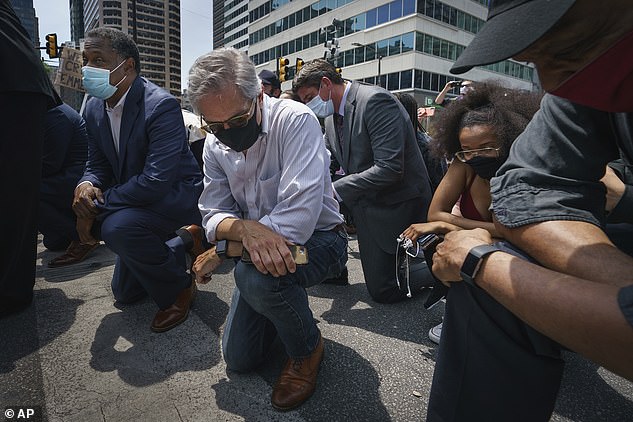 Philadelphia District Attorney Larry Krasner (kneeling center) was elected to office last year on a social justice platform, and his campaign was backed by a PAC funded by George Soros

John McNesby, president of the Fraternal Order Police Lodge #5, blasted Krasner over the charges, saying that Bologna was using lawful force to defend his fellow officers in the midst of a violent melee.

‘This issuance of an arrest warrant for Bologna comes on the same day police issued a new catch and release policy for those who assault police officers. Why are officers not afforded those same basic rights?’ he continued.

‘Along with arsonists, looters and thieves, Krasner is complicit in the destruction of our great city,’ McNesby said.

The union boss vowed to ‘vigorously defend Bologna against these baseless allegations and charges.’

At a news conference Friday, Philadelphia Police Chief Danielle Outlaw said that Bologna is one of several officers under investigation after videos on social media depict them using force during this week’s protests in a manner that ‘does not appear to be in accord with our policy.’

She called the videos of Bologna particularly troubling because they appeared to show him striking someone above the neck.

‘I am deeply concerned about this,’ she said. ‘I assure you that each of these investigations will be conducted in a thorough and objective manner without undue delay.’

Bologna is charged with two felony counts of aggravated assault as well as misdemeanor counts of simple assault, possession of an instrument of crime, and recklessly endangering another person.

He is currently free on a $75,000 unsecured bail, court records show.