Philip Hammond and Tory Remainer rebels have suggested they could bring down the next government ‘in the interests of the country’ if Boris Johnson pursues a No Deal Brexit.

Mr Hammond has claimed a further Brexit delay is ‘urgently needed’ to avoid a disorderly divorce but he also failed to rule out backing a vote of no confidence in a government led by Mr Johnson.

Meanwhile, Stephen Hammond, a Remain-backing Tory health minister, has hinted he would be willing to push the ‘nuclear button’ of a no confidence vote as he said politicians must ‘do the right thing as they see it for the country’.

The fact that a sitting Tory Chancellor is openly discussing whether he could support a move to bring down the next Conservative administration is unprecedented in recent history.

Mr Hammond said he was not going to ‘exclude anything at the moment’ when asked directly whether he could back a bid to scupper a Mr Johnson.

His comments, along with those of his fellow Remainer rebels, are likely to spark a furious reaction from Tory Brexiteers and moderates who have called for the party to unite around the next leader.

It came amid reports that Mr Hammond along with fellow Europhile Cabinet ministers David Gauke and Rory Stewart are planning to resign immediately before Mr Johnson is expected to take office next Wednesday.

It is thought the trio will quit in order to deny Mr Johnson the opportunity to sack them after he said all his ministers will have to support No Deal as an option.

Meanwhile, it emerged Tory Remainers are considering a plan to stop No Deal which would involve asking the Queen to intervene and ask Brussels to push back the exit date beyond October 31.

Separately, Brandon Lewis, the Conservative Party chairman, admitted some Tory members will not be able to vote in the contest between Mr Johnson and his rival Jeremy Hunt because of administrative problems. 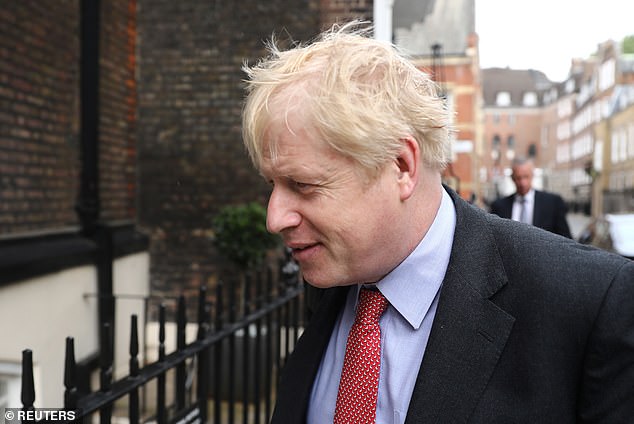 Boris Johnson, pictured today in Westminster, has committed to delivering Brexit by October 31 ‘do or die’ and with or without a deal

The battle between Mr Hammond and Mr Johnson has intensified in recent weeks as the Chancellor stepped up his criticism of the former foreign secretary’s Brexit plan.

Mr Johnson has vowed to deliver Brexit by Halloween ‘do or die’ and with or without a deal.

He has also insisted that everyone who serves in his government will have to back keeping No Deal as an option.

But the Chancellor is vehemently opposed to such a departure from the EU and is expected to be sacked by Mr Johnson if he does not deny him the opportunity to do so.

Mr Hammond has already suggested he will be a ‘nightmare’ on the backbenches over Brexit and pledged earlier this week to do ‘everything I can’ to stop No Deal.

But he has now gone further in an interview with French publication Le Monde by formally calling for another Brexit delay.

Ursula von der Leyen, the incoming president of the European Commission who will take office the day after Brexit on November 1, said she is ‘ready’ to agree to a further extension.

Mr Hammond said permanently postponing Brexit was not a good idea but added: ‘But in practice, an extension is urgently needed.

‘It is simply impossible to negotiate anything before 31 October, given that the summer break begins, a new EU Commission comes into office and the United Kingdom Government changes.

‘If the future government in London has the sincere will to strike a deal with Europe, it will take extra time. If it does not, the British Parliament will insist on getting a new extension.’

Mr Hammond said that if the two sides were unable to strike an acceptable agreement then ‘we may need to consult the British people again, in one form or another’.

Asked directly if he ruled out backing a vote of no confidence against Mr Johnson, the Chancellor apparently said: ‘I do not exclude anything at the moment.’

Health minister Mr Hammond was asked on BBC Radio 4’s Today Programme today if he was prepared to press the ‘nuclear button’ of a no confidence vote in the next government.

“I hope we never get there but I think a lot of people were taught that you must put the interest of the country before yourself,” he said.

He said he did not believe that ‘we will get there’ but added: ‘I think it’s really important that at this historic stage in this country’s lifetime in modern politics that politicians put aside any of their own personal ambitions or views and actually make sure they do the right thing as they see it for the country.’ 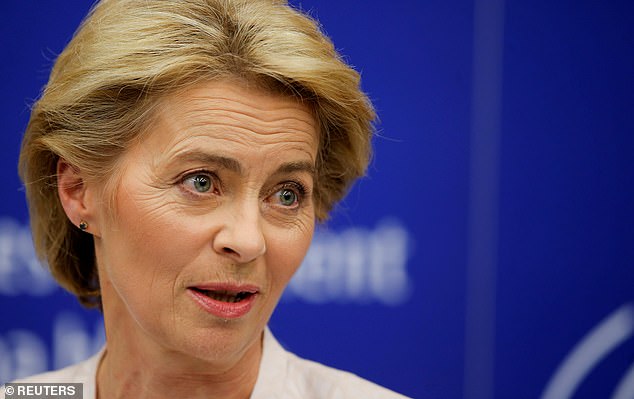 Ursula von der Leyen, the incoming president of the European Commission, said she is ‘ready’ to agree a further Brexit extension

The Chancellor sparked controversy yesterday after he helped orchestrate a successful Remainer bid to block No Deal.

Mr Hammond sent text messages to fellow ministers urging them to ignore a three-line whip to vote against an amendment designed to make it almost impossible for the next PM to suspend parliament to force through No Deal.

Some 17 Tory MPs voted against the government, while 30 abstained.

Mr Hammond was among those to have ignored the three-line-whip – the first time in memory a chancellor has done this and not resigned or been sacked.

Backers of Mr Johnson said proroguing parliament in the run up to October 31 to stop a last minute attempt to thwart a disorderly divorce was ‘never going to happen’ anyway.

He has repeatedly refused to rule it out.

Today it emerged that Mr Hammond, David Gauke and Rory Stewart are all planning to resign just hours before Mr Johnson is expected to move into Number 10 next week to deny the new PM the chance to sack them.

The trio of Remain-supporting Cabinet ministers are believed to be preparing to quit after Theresa May holds her final prime minister’s questions in the House of Commons on Wednesday.

Meanwhile, it is thought they could be joined by more than a dozen junior ministers who believe they will be on the way out of the government any way once Mr Johnson takes office.